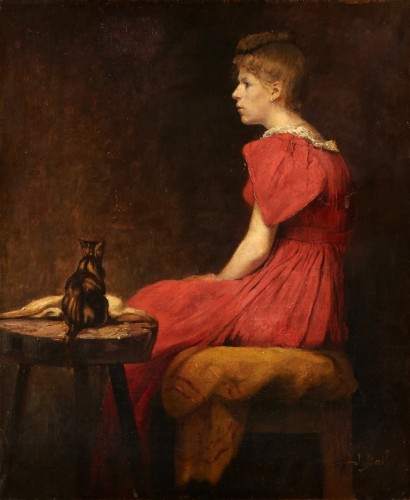 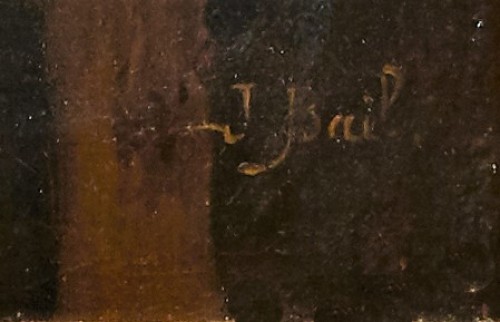 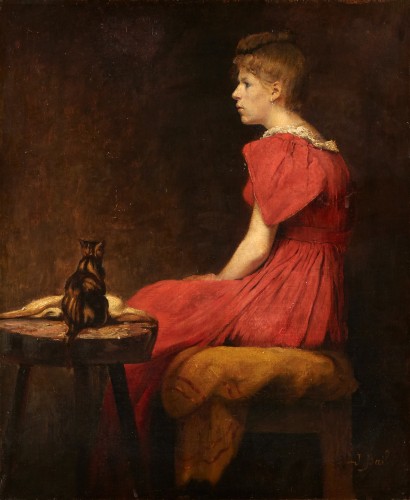 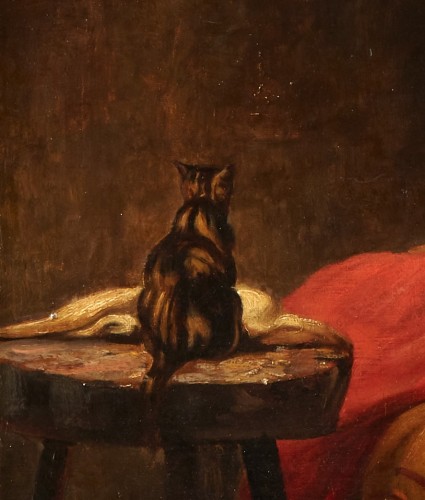 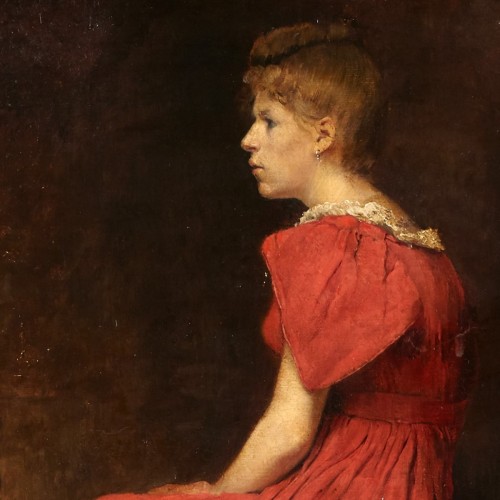 Woman with cat
Signature lower right: J. Bail
Relined and some restorations
Joseph-Claude Bail was born during a period of intense disagreement in the Parisian art world.  For several years the Salon juries had rejected many progressive artists works; printmaking was making a charge at establishing itself as a true art form; the Barbizon group of painters challenged the tradition of historical landscapes with their views of the modern countryside, and Realism was decades old and had brought forth such combative figures as Gustave Courbet. Yet not all artists can be said to belong to this modern view of the nineteenth century. Numerous artists found prestige and public acclaim both at the Salons and with the public with works that relied on past styles and traditions influenced by the “Little Masters” from seventeenth-century Holland and traditions from eighteenth-century France. Joseph Bail belongs to this group; not an artist who sought to align himself with the increasing stylistic anarchy of the late nineteenth century, but one who carefully examined the changing needs of his patrons and gauged the underpinning social propensities of the time. Bail continued the tradition of Realism exemplified by Théodule Ribot and François Bonvin and received positive feedback which reinforced the continued respect for scenes reminiscent of daily life during the earlier years in France.
Joseph Bail was born on January 22nd, 1862 in Limonest in the Rhone region of France. His father, Jean-Antoine Bail, was a trained genre painter who was heavily influenced by the Dutch masters and focused his attention on depicting scenes from daily life. It is clear that Joseph, as well as his brother Frank, followed in the footsteps of his father, as he too would be influenced by these artists despite new interests in subjects and representation during this period in France.
In a period of increasing modernity and industrialization, Bails paintings glorified the past ways of life in France and found a sympathetic audience in bourgeois patrons.
Presumably beginning at a young age, Joseph’s initial artistic training began with his father who instilled in him a respect for the eighteenth-century French painters such as Jean-Siméon Chardin and the Dutch masters and encouraged him to view their works at the Louvre. As all three members of the family, Jean-Antoine, Franck, and Joseph, were artists, the Bail family represents one of the few associations of family painters of the Realist tradition remaining during the latter half of the nineteenth century. They could often be found exhibiting alongside one another at the annual Salons, showing work that displayed similar qualities in their subject. After beginning his training under his father, Bail began studying, presumably between 1879 and 1880, in the atelier of Jean-Léon Gérôme, an accomplished painter and teacher of the period. This was a short-lived period of tutelage as in 1882 Gérôme was no longer listed in Salon catalogues as Bail’s teacher, perhaps because Gérôme’s choice of subjects differed quite dramatically from those of his father and those that Bail would follow for the majority of his career.
Just after his sixteenth birthday, Bail debuted at the Salon of 1878, alongside both his father and brother, with Nature Morte (Still Life). The still life tradition in France was invigorated by the work of Jean-Siméon Chardin in the eighteenth century and still lives continued to be a major interest for many artists and many occupied themselves primarily with this type of painting.  They figured as an important element of Bail’s work, and many of his genre scenes also show still life arrangements within the picture, even when they were not the primary focal point.
While still lifes dominate Bail’s beginning work shown at the Salon, he expanded his early themes to also include scenes from the countryside, animals, and genre paintings. As his style progressed, he showed a stronger affinity with his father’s work and that of the Chardin and the Dutch masters, choosing to portray room interiors illuminated by a strong light source. In recalling these past masters and this type of painting, Bail was appealing to the growing middle class as his work referenced earlier highly esteemed painters. Emmanuel Bénézit wrote of Bail and his interiors, that:
He excels at creating in all of his painting a very lively bright light due to the radiant shine of some brilliant point or to the direct projection of the exterior daylight…it’s assuredly the expression of original and rather harmonious art.  His technique is very delicate and his colouring just right. The composition of his painting, always elegant, is skilfully treated.
Bail regularly submitted to the Salons and towards the end of his careers was “hors concours”, or exempt from having to submit his works for jury approval. He received awards in 1885 (Honourable Mention), 1886 (third-class medal), 1887 (second-class medal), 1889 Exposition Universelle (silver medal), 1900 Exposition Universelle (gold medal), and 1902 (medal of honour).  He was also named Chevalier de la Légion d’Honneur in 1900, and was a member of the Société des Artistes Français.  He died on November 26, 1921.