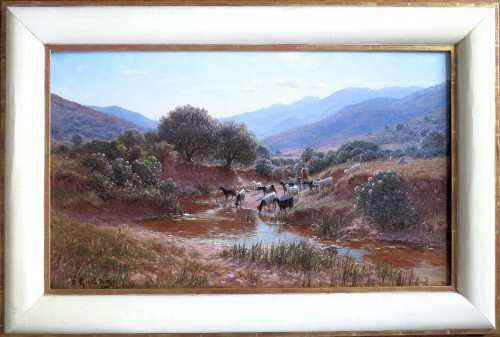 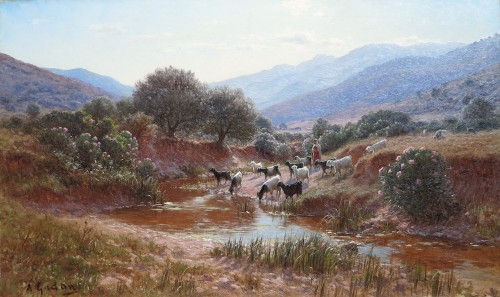 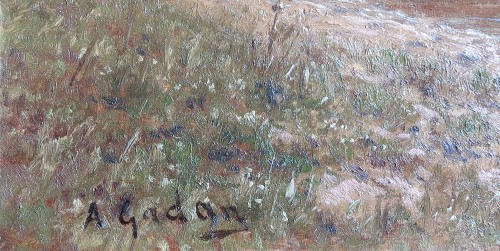 Mount Eydough and the Golden Stream valley, around Bône

Antoine Gadan, born in Seurre in Côte d'Or, learned his profession as a painter in his native country, in a self-taught way, and some early works representing the Burgundy countryside still testify to it, but it is in his adopted country , Algeria, that he developed his exceptional talent as a landscaper.

A whole part of the Gadan family, of modest origins - his father was a cabaret-owner, left for Algeria to seek a better life there and the young painter, then aged twenty-seven, stayed in Marseille while awaiting the boarding, with his parents, his brother, his wife and his first son Charles, who was born there in November 1880.

The artist will settle down with his family "in a small street in the suburb, parallel to avenue Célestin Bourgoin, roughly exactly behind the church of Sainte Anne. The house, as simple as him, was almost buried in greenery and flowers, and his studio was without the slightest pomp, at the end of the bushy garden” (Louis Armand, Bône, son histoire, ses Histoires, Constantine, Imprimerie Damrémont, 1957 , pp. 214-215).

In the countryside around Bône, his love of nature is exalted, everything contributes to the development of his temperament in search of harmony. He immediately loves the luminous purity of the country, this wild and gentle moor, strewn with oleanders, asphodels or tufts of rushes, these rounded mountains, these young children leading their flocks, and never tires of painting them. A commentator of the Revue nord-africaine illustrated expresses it perfectly: “Gadan excels in his paintings from the Sahel of Bône… The artist, one feels it, is master of himself, because he is at home, among horizons and colors that he renders with a precision that only an intimate knowledge of the environment can translate so faithfully (…). There is something infinitely soft, tender and at the same time charming in his painting, because in the country of Bône, such is the charm of the plains and the hills. (…) Gadan works morning and evening and surprises nature at its most intimate hours, when shadows and mists float over everything. (...) He does not seek great effects, he paints what he sees with truth and poetry. And with such simplicity, he attains beauty ”(Boyer, in Revue nord-africaine illustrated, February 2, 1908, P. 59-60

Two paintings presented in Paris in 1895, at the Salon of French Artists, point out favorably: “The white river at El Kantara” and “Algerian Night”. They are followed by “The Red River at El Kantara” at the Salon of 1896. Recognized from then on as a landscape designer and decorator, Gadan is responsible for brushing the diorama intended for the decoration of the Algerian Pavilion at the Trocadero, during the Exposition Universal of 1900. He chooses to illustrate "The Algerian coast from Bône to Oran", a pretext for making a real pictorial journey through the most beautiful sites of the Algerian shores. This huge diorama, which will be exhibited in London and New York, after Paris, is a great public success, while eliciting the praise of the jury for its author, in particular those of the history painter Édouard Detaille and the landscape designer Jules Breton, member of the Academy of Fine Arts.

Gadan was subsequently honored with an exhibition of fifteen canvases at the Constantine Museum in 1908, organized on the initiative of the then curator Mr. Hinglais. That same year ended with a warm welcome at the Salon d'Automne in Algiers where the critic C. Monplessis praised “the intense poem of luminous life” in which “the amethyst pink fluidity through which (Gadan) shows us the dune unfolds”. bônoise ”. The cantor of eastern Algeria was then at his peak, nicknamed the "glory of Bône".

We don't know much more about the seemingly peaceful and quiet existence of this artist whose works have their place among Algeria's best painters. 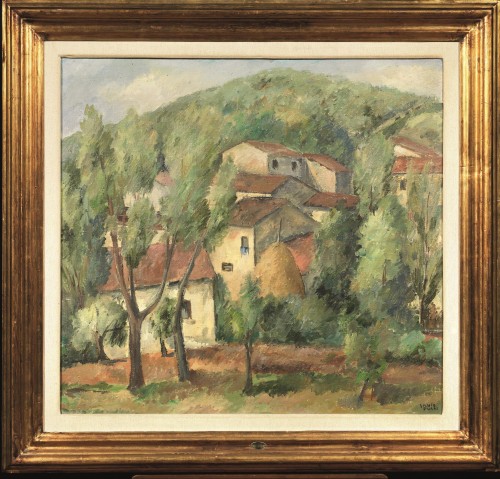 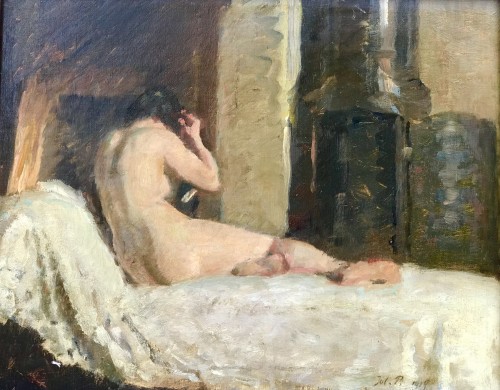