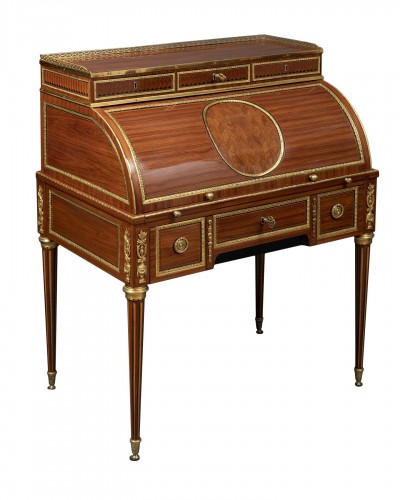 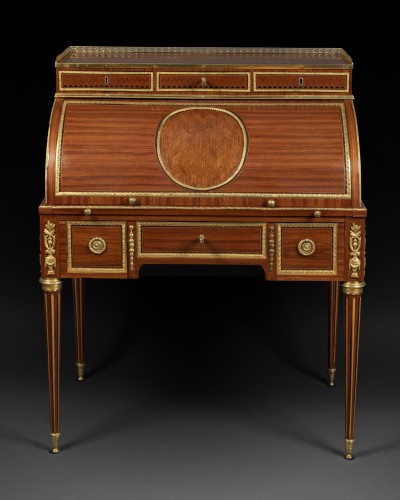 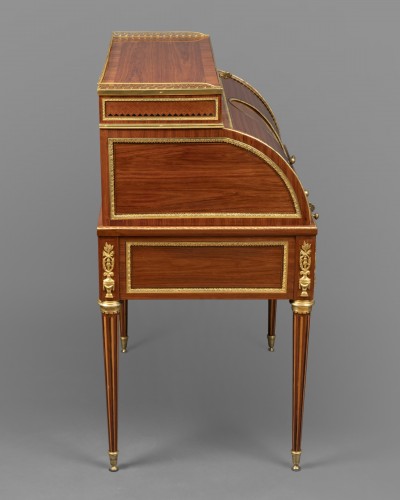 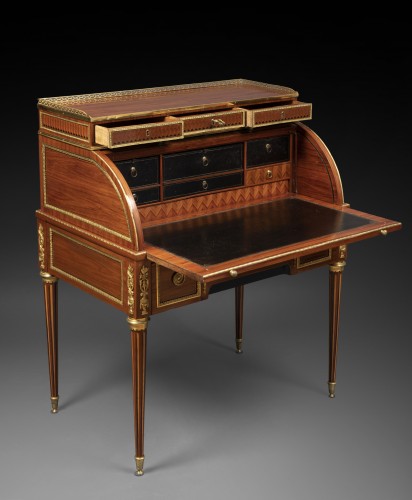 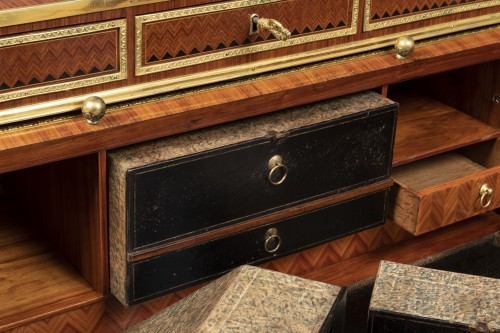 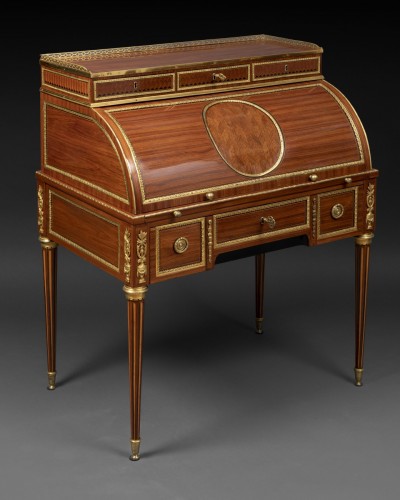 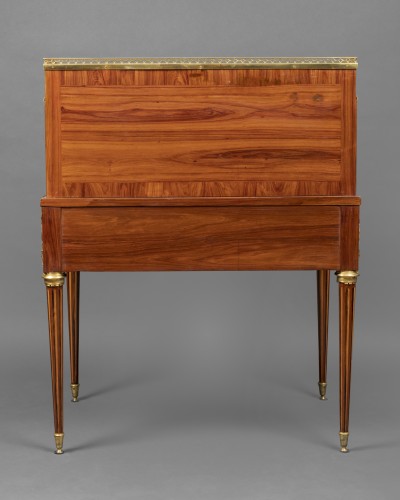 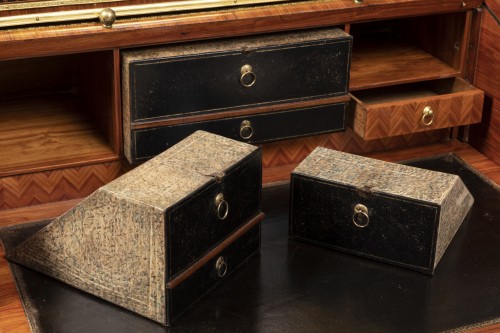 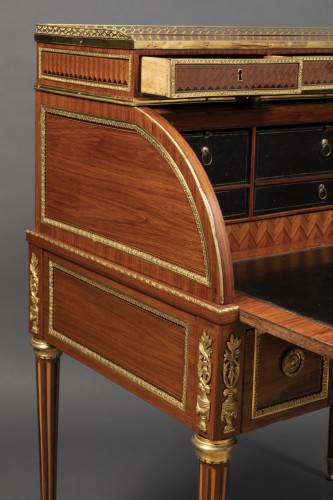 Rare small secretary with cylinder inlaid with precious wood, rosewood, satin, ebony and boxwood.
It rests on four spindle feet adorned with marquetry grooves and opens with a large central belt drawer whose compartment front simulates three drawers.
The richly satin-veneered secretary flap in a rectangular reserve with an oval medallion in the center inlaid with chevrons.
It reveals an interior made up of three cardboard boxes adorned with black leathers and an inkwell drawer also veneered with a herringbone marquetry.
The removable worktop, adorned with gilded leather with small irons of the same type as that of the cardboard makers, slides so that its herringbone-veneered bottom takes place directly above the lockers.
A small tier with three herringbone rosewood marquetry drawers terminated by triangular ebony bases surmounts the cylinder.
The double-turn closure of the middle drawer locks the cylinder.
The top of the rosewood veneered tier is surrounded by an openwork bronze gallery.

Rich original ornamentation of finely chiseled bronze and gilded with mercury including frames with frieze of stripes of hearts, a gallery, pull handles with laurel tori, rings and end caps, laurel drops and pots flowered fire.

Parisian work from the end of the Louis XVI period attributed to Ferdinand Bury * around 1790-1795.

A similar model, but of large dimensions, from the Guy de Rothschild collections at the Château de Ferrière, went on public sale on December 11, 2014, Christies New York sale lot 27 ($ 461,000)

* Ferdinand Bury (1740 - January 20, 1795) is a cabinetmaker received Master in Paris on July 27, 1774.
Ferdinand Bury exercised once his master's degree obtained at the top of the rue de Charonne, in the former part of Hondarribia, so called since the marriage of Louis XIV. In addition to important pieces in marquetry, mahogany, yellow wood, Bury made abundantly fancy furniture, such as mechanical tables, pedestal tables, knitting machines, trinkets and secret chests; He therefore employed mostly workers of German nationality, who had special aptitudes for these kinds of work.
The care that Ferdinad Bury brought to his work earned him success, but his end was clouded by unfortunate speculations to which were added cruel embarrassments caused by the Revolution. He left a fame which still persisted at the beginning of the 19th century, as evidenced by an advertisement published at that time in the Petites Affiches to call the attention of amateurs to a "solid mahogany secretary, a superbly processed work by Ferdinand".

With its precious plating on all sides and its rich bronze ornamentation, our delightful lady's desks offer us the most perfect refinement of the best achievements of the end of the 18th century.
While being a formal living room piece of furniture, it remains very useful; its closing system, the organization of its trompe l'oeil cardboard boxes or its removable worktop perfectly represents the ingenuity of the great century.
Although not stamped because made after the fall of the corporations in 1791 our office is attributable to Ferdinand Bury.
In fact our desk is similar to the one kept at the Fabre museum in Montpellier and coming from the Sabatier d'Espeyran family, but it offers us an even smaller size (84.5 cm against 114 for that of the museum).
Bury was one of the most renowned and sought-after cylinder desk manufacturers of his time, to the point that specialists allowed themselves to describe his achievements with his first name only, "A Ferdinand's desk" could one read during the inventories after death. 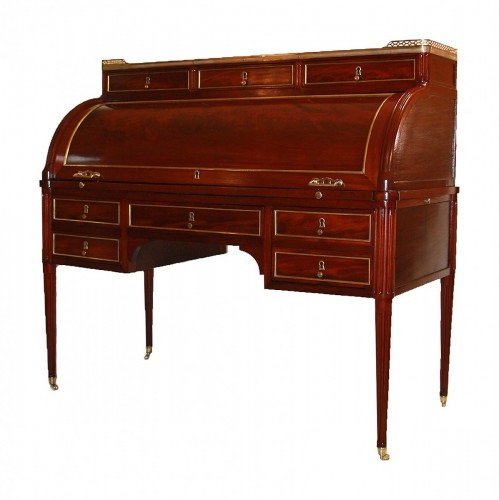 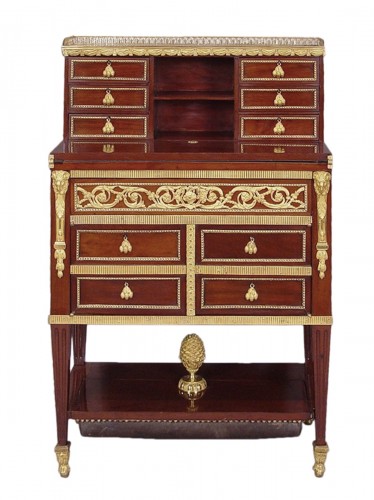 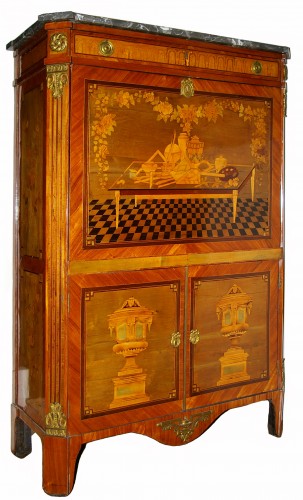 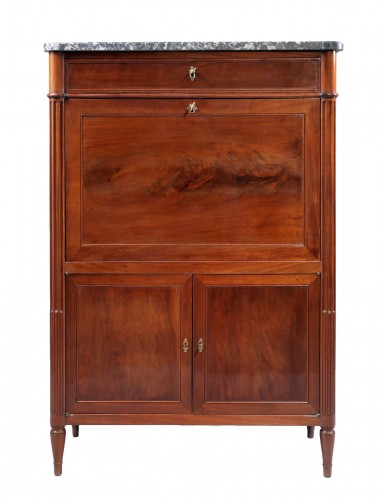 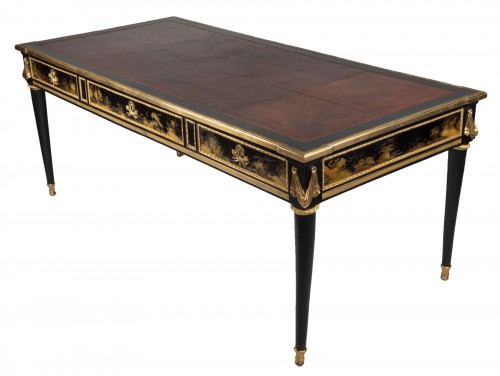