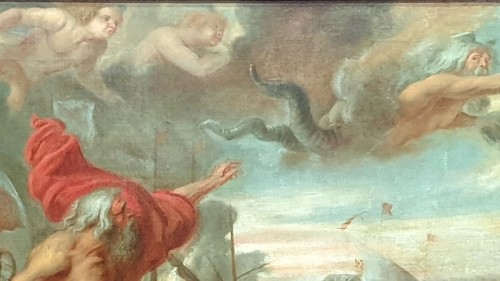 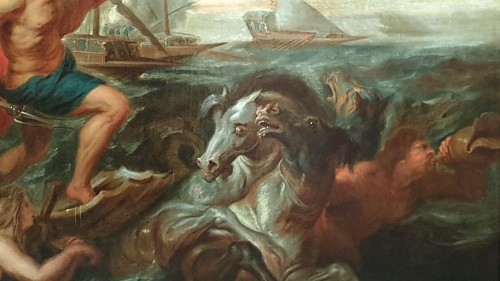 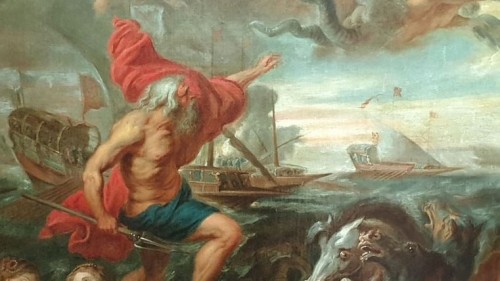 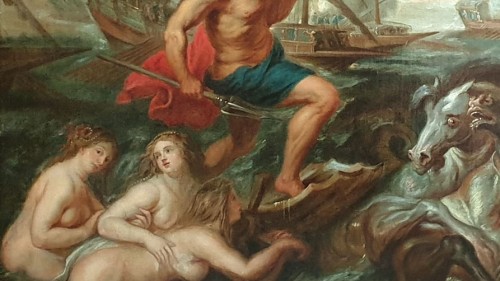 Neptune calming the waves is a recurring theme in art history, even if it is more present in sculpture than in painting.

Rubens has always done it brilliantly.
Here we offer you a copy of this painting from the Gemäldegalerie in Dresden.

Rubens' painting was painted around 1635.
It was part of a group of paintings that the city had commissioned from the artist for the entry ceremony of Cardinal-Infanta Ferdinand, (the new Governor General of the Southern Netherlands which was under Spanish rule).
It is rare that such paintings, especially in this context, are preserved.
But at the time the city sold some of its paintings, and we find them scattered in different museums.

Rubens was inspired by a passage from Virgil's Aeneid.

Neptune attacks the winds that have dared to stir the sea without his order and threatens them: Your ego... which could be translated as You, whom I will...
But he leaves his threat unanswered, for he has better things to do to calm the waves that sway Aeneas...

In fact, in the upper part we see beings representing the winds.
In the middle, in the back, the boats of Aeneas' fleet are planted.
In the foreground, Neptune, his finger pointing to the winds, and in his other hand his trident.