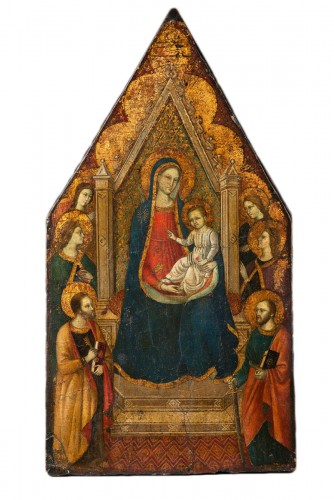 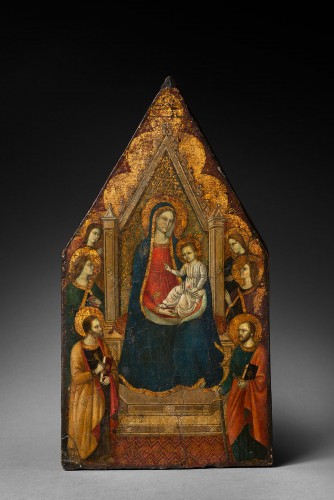 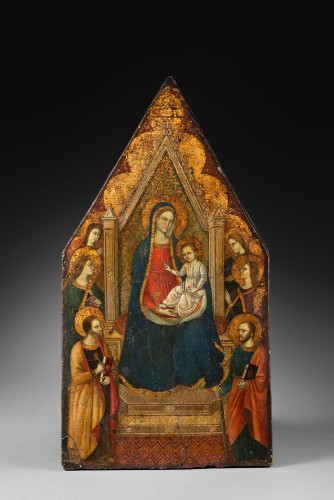 Pyramidal in shape, this poplar wood panel is painted with tempera. This is a technique that consists of binding pigments using egg yolk, characteristic of Tuscan production in the 13th and 14th centuries. The painting is enhanced with leaf gilding, for the background of the composition and certain details. The "golden backgrounds" are directly inherited from the Byzantine artistic tradition. Particularly present in the 13th century, after the Crusades, which brought an important influx of oriental works to Italy, the "maniera greca", testifying to the immense impact of Byzantine painting on the renewal of Western painting, lasted until the end of the 14th century, when a desire for naturalism led artists to focus on the representation of figures and landscape. This golden background confers a profoundly divine character to the composition. In the centre of the composition is a majestic architectural throne, which follows the shape of the painting, placed on a paved floor and decorated with geometric motifs.

The Virgin is seated on this throne, which is then represented as Maestà, that is, Virgin in Majesty. A deep interest is conferred on her maternal attitude. In fact, the Mother of God holds her divine Child in her arms, sitting on her lap, with great gentleness. She is dressed in a beautiful red robe and covered with the traditional blue mantle, from her head to her feet, in which she tenderly wraps Christ. The Child Jesus makes a sign of blessing with his right hand and holds a red carnation in his left hand. According to the legend, this flower was born from the tears of the Virgin falling at the foot of the cross of the dead Christ. This floral attribute therefore has a double meaning, on the one hand it is the symbol of the maternal suffering experienced by the Virgin, and on the other hand, its red colour is a prefiguration of Christ's future suffering and sacrifice for humanity. The divine character of this flower is underlined by the etymology of its Greek name, Dianthus, a combination of the words Dios (God) and anthos (flower).

The throne is flanked on either side by two pairs of haloed angels, while in the foreground are two saints. On the left, St. Peter holds firmly to his main attribute, as the guardian of Paradise, a key, which is a reference to the phrase spoken by Christ according to the Gospel according to St. Matthew (16:19): "I will give you the keys of the Kingdom of Heaven. ». On the other side of the throne, Saint Paul faces him. He holds the sword of his martyrdom in his right hand. Both Saints carry carefully bound books.

Only the Virgin, who by her role as intercessor between heaven and earth has a protective value, looks towards the faithful. Her deep and benevolent gaze accompanies the believer in his prayer. On the other hand, as in the Maestàs of Giotto and Duccio, kept in the Maestà Hall of the Uffizi in Florence, the angels and saints do not look at the spectator but look towards the Virgin and her divine son. The painting is made from the point of view of the believer. Therefore the faithful are invited to follow the example of the holy figures represented, and to imitate the trajectory of their gaze. The believer looks at the image of God and not the other way around. This practice of assimilating the believer to the saints is characteristic of the Late Middle Ages. It is more widely known as Imitatio Christi, i.e. imitation of the life of Christ, and by extension, of the lives of the Saints, whose worship was particularly widespread at that time because of their accessibility as models.

This introspective and personal work is part of a wider movement of private devotion, growing in the 14th century, of which our work is an excellent example, art being a primary medium for the spread of domestic piety. The choice of the characters depicted is characteristic of the central triptych panels, used as an "aid to prayer". Moreover, its small size confirms the hypothesis that it was a devotional object intended for the laity, comparable in its use to a liturgical book such as a Book of Hours or a missal.

Although it still borrows from a strong medieval heritage, notably remarkable for the use of the gold background and the massive throne of the Virgin, our work already bears witness to the nascent Renaissance of the 13th and 14th centuries, more commonly known as the "primitive". Artists are trying to gradually detach themselves from the pictorial tradition in order to give their production a more "real" value. They heralded a new plastic current, the materialization of Humanism, seeking to offer figures with a new realism, less symbolic, with which Christianity is imbued to get closer to the faithful. The faces of our eight figures, with their fine, soft, deeply humanized features, as well as the virtuosity and plastic inventiveness of the painter, are thus completely in line with the production of primitive artists in Tuscany in the 14th century, and in particular the Florentine artist Bernardo Daddi. 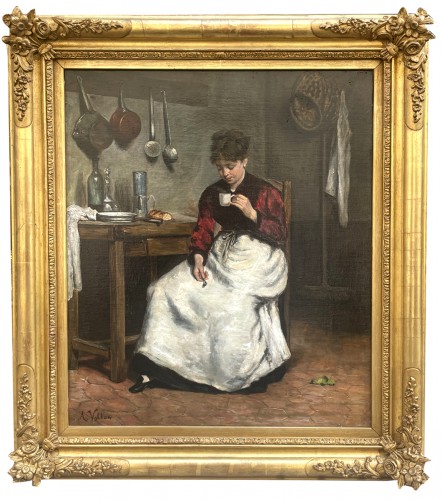