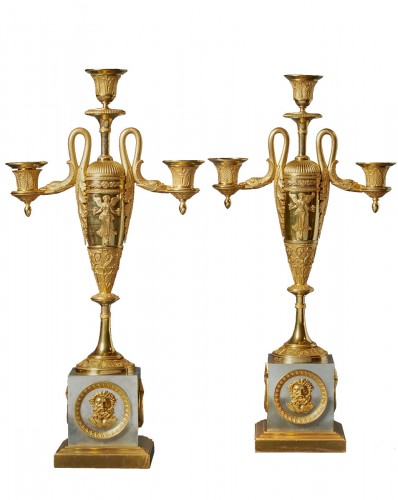 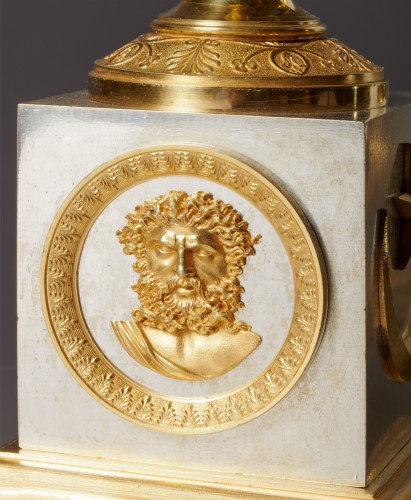 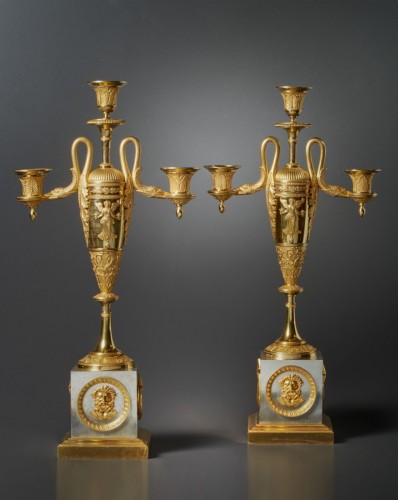 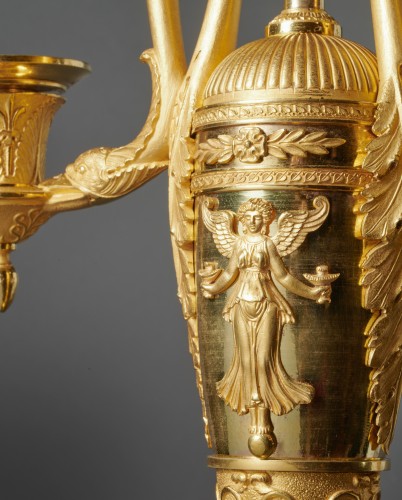 An extremely fine pair of Empire gilt and silver bronze three-light candelabra attributed to Claude Galle, each of vase-shaped form surmounted by a single vase-shaped nozzle cast with anthemion above an upright stem supported on the top of an elongated vase which is flanked either side by two scrolled candle branches issuing from foliage that wraps around the sides of the vase and loops above, terminating in foliate-wrapped swan heads, with each swan holding in its beak a vase-shaped candle nozzle that accords with the surmounting nozzle. Each vase with a fluted domed cover, mounted around its neck with a rosette and foliage above a winged Victory holding a torch in each of her outstretched hands, the cup of the vase decorated with scrolls and palmettes, on a spreading circular foot, upon a square silver bronze base, mounted at the front with a bearded Bacchus herm head within a circular gilt frame and on the sides by a star above a crescent moon, on a stepped square base, under which is a label stamped with the name of Jean Seligmann & Cie Paris and numbered 1050 2

With their exaggerated vase-shaped forms and use of swan heads in combination with the classical ornament such as the star and crescent moon and the Bacchic herm heads, these imposing candelabra conform to those made by the celebrated Empire fondeur Claude Galle (1759-1815). Whilst Galle’s bronzes were eagerly sought after by European clientele, works such as the present pieces were to exert a strong influence upon Russian bronziers and designers. For instance, one can compare the swan head-shaped candle branches here with a pair of Russian two-light candelabra in the manner of Friedrich Bergenfeldt of circa 1810 which have similarly decorated nozzles balanced upon winged swan heads (Christie’s London, 25th November 2008, lot 106).

One of the rare features of the present candelabra are the silvered bases, of which the patination perfectly offsets the gilt bronze mounts. At the front are herm heads representing the bearded Bacchus (sometimes referred to as the Indian Bacchus), as depicted by the ancient Greeks and Romans whose images of the god of wine showed him with his hair and beard in tight ringlets and sometimes with a headband. Such herm heads were portrayed in the French decorative arts of the period for instance adorning a fireplace in the Hôtel de Broglie in Paris. In the same way the distinctive crescent moon below a single star (as shown of the sides of the bases) were also popular French motifs of the period. For instance, they appear in a similar combination, interspersed with anthemion as decorations on a feu à galerie of circa 1804 at Château de Fontainebleau (illustrated in Marie-France Dupuy-Baylet, “L’Heure, le Feu, la Lumière: Les Bronzes du Mobilier National 1800-1870”, 2010, pp. 138-9, no. 73).

As one of the finest gilders and bronze makers of his day, Claude Galle enjoyed the patronage of royalty, the aristocracy and Napoleon Bonaparte. Born at Villepreux near Versailles he was apprenticed in Paris under the fondeur, Pierre Foy. In 1784 Galle married Foy’s daughter and on his father-in-law’s death in 1788 he took over his workshop, which he built up into one the finest of its kind. Galle then moved the business to Quai de la Monnaie and from 1805 operated from 60 Rue Vivienne. First listed in the trade registers in 1784 he was received as a maitre-fondeur in 1786 and promptly gained the first of many commissions from the Garde-Meuble de la Couronne. He is known to have collaborated with Pierre-Philippe Thomire, amongst others, and was responsible for the majority of bronzes d’ameublement supplied during the Empire to Château de Fontainebleau as well as Saint-Cloud, the Trianons, Tuileries, Compiègne, Rambouillet and a number of the Italian palaces including Monte Cavallo, Rome and Stupinigi near Turin. After his death Galle’s business was reopened and prospered under his son, Gérard-Jean Galle (1788-1846). Today his work can be found among the world’s finest collections, which in addition to the above include the Musée National de Château de Malmaison, the Musée Marmottan in Paris, the Museo de Reloges at Jerez de la Frontera, the Residenz Munich and the Victoria and Albert Museum in London, in addition to La Malmaison, Pavlovsk Palace at St. Petersburg, the Ostankino Palace in Moscow as well as the Württembergisches Landesmuseum in Stuttgart. 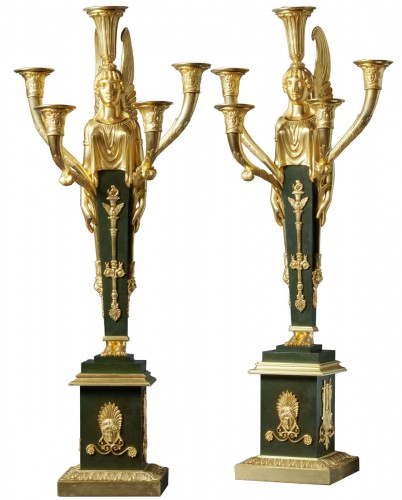 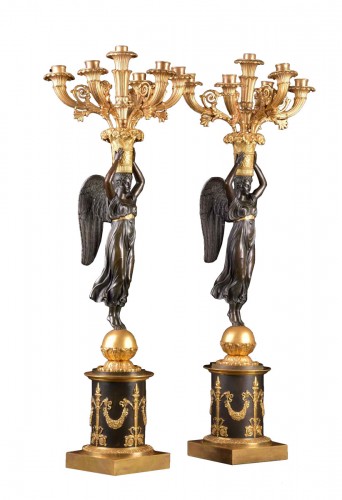 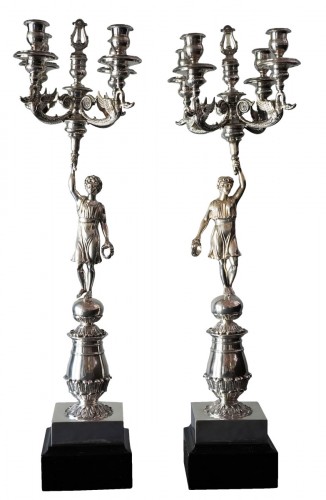 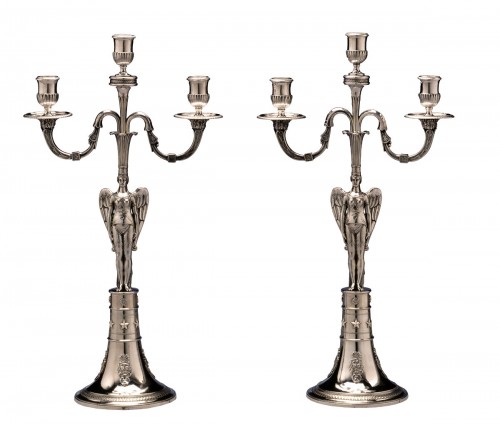