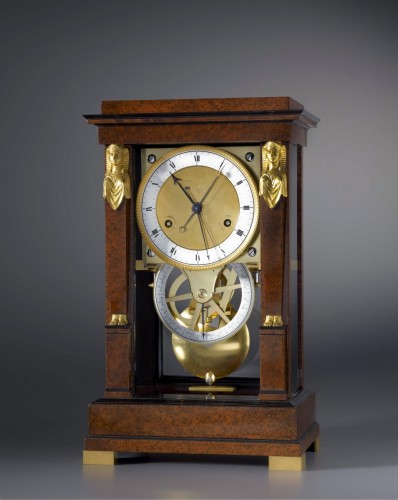 A superb Empire ormolu mounted amboyna and ebony month going table regulator with year calendar and equation of time. The dial with white enamel Roman dial annular chapter ring with blued steel arrow-head mean-time hour and minute hand, counterpoised blue steel hand with gilt sunburst indicating solar time, counterpoised blue steel sweep centre seconds hand, the gilt centre engraved Lory à Paris 1819, the winding indication, the white enamel year calendar ring below with blued steel arrow-head pointer indicating to the months with the relevant sign and to the correct dates, the large equation kidney wheel mounted directly behind and operated on a typical cantilever system, the movement with substantial rectangular plates secured with four brass pillars with blued steel screws to the front plate and pinned to the backplate, twin going barrels, the deadbeat anchor escapement mounted on the backplate with jewelled pallets, fine adjustment to the crutch piece, spring-suspended gridiron pendulum with brass and steel rods, large countwheel strike on the bell on the backplate, the movement resting on a massive brass bracket secured at the top and sides, the movement itself secured with two milled ormolu and steel bolts into the base pillars.

The case with ebonized moulding to the top bottom, glazed sides, the rear door with spring-loaded pin-hole catch the side, the front glass lifting upwards beneath the detechable flat top, the front with finely cast ormolu Egyptian caryatids, the ebony-lined base on ormolu block feet.

The movement was made by the Parisian clockmaker Claude-Armand Lory (d. after 1825), whose name is associated with precision mechanics, he exhibited at the Exposition des Produits de l'Industrie, in Paris 1823, for which he was awarded a silver medal. Lory is recorded as having trained under the celebrated clockmaker Robert Robin (1741-99), who was appointed to King Louis XVI and his wife Marie-Antoinette but also later gained the titles Horloger de la République and Horloger du Directoire. No doubt Lory gained a strong grounding in mechanical expertise from Robin despite certain disagreements between him and the Robin brothers concerning a constant force escapement.

By 1804 Lory was established at rue de Jouiy and then by 1819 had moved to 2 place des Victoires, close to where Jean-Antoine Lépine (1720-1814) had also worked at no 12. When first admitted to show at the Exposition des Produits de l'Industrie in 1804 he gained an honourable mention. He also exhibited there in 1819 and distinguished himself even further at the exhibition of 1823. 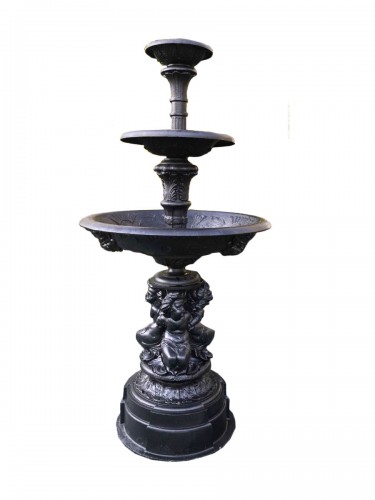