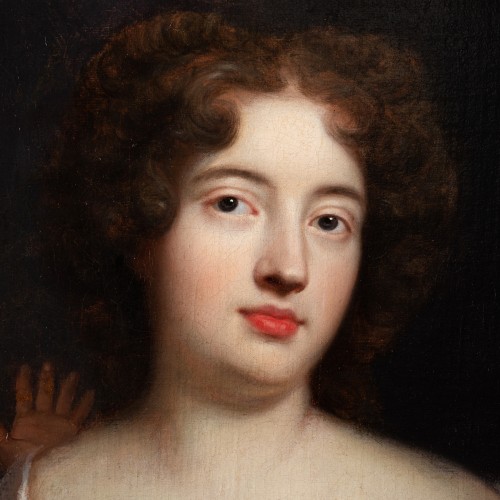 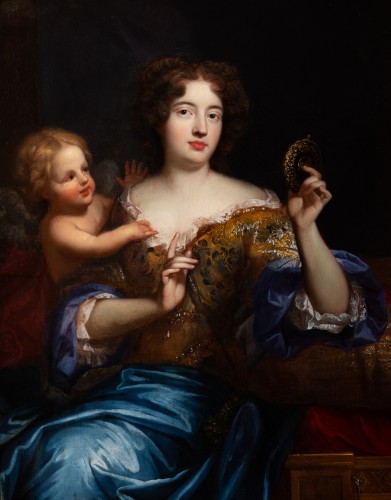 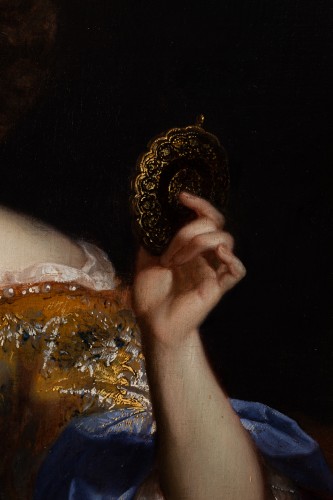 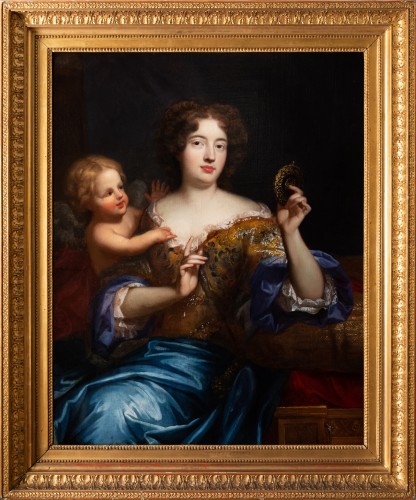 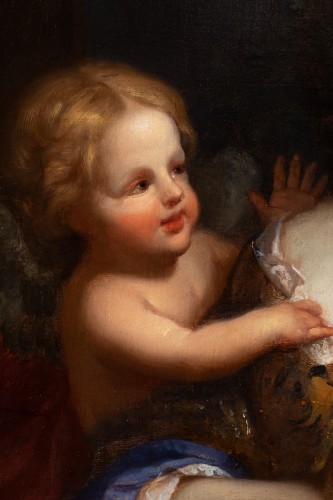 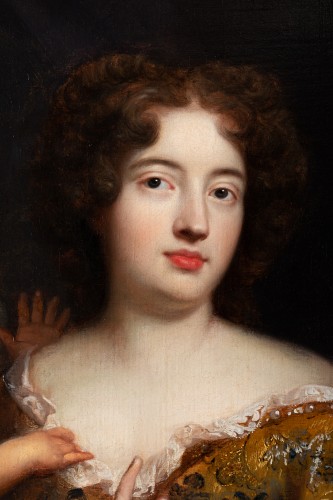 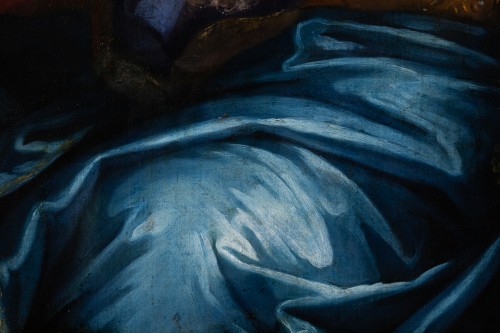 The royal favorite is richly dressed in a dress brocaded with gold and silver, surmounted by a blue velvet cape embellished with lace.

She is styled "à la Hurluberlu", with two large volumes of curls on each side of a well-marked central separation.

The Duchess is leaning on a cushion, facing a small pocket mirror she holds in her hand, while Cupid tries to see his reflection over her shoulder.

With her sweet illuminated face staring at the viewer, she seems impassive, but her raised index finger seems to want to interrupt this deafening silence.

Beautiful state of conservation, frame in gilded oak from the Empire period.

A similar composition attributed to Nicolas Mignard and representing Catherine Charlotte de Gramont, Princess of Monaco is kept in the Gramont collection.

The work we present is of a rare intensity.

Pierre Mignard reveals here all his genius as a painter, with a skilfully studied composition and a V-shaped architecture, formed by the bodies of Cupid and the Duchess.

He also offers us all his talent as a colorist with shimmering shades, notably a deep blue and a face with porcelain hues, which stands out against the black background and tirelessly attracts the viewer.

With this subtle oblique lighting which reinforces the desired contrast, Mignard demonstrates his perfect mastery of the "chiaroscuro" technique he acquired during his long stay in Italy.

If all of these criteria make our portrait a sublime model of the genre, the enigmatic message it delivers allows us to classify it as one of the master's masterpieces.

Indeed, the king's favorite is undeniably represented as Venus, goddess of beauty, symbolizing her love for the monarch by the presence of Cupid, but another, more important message seems to emanate from this portrait.

Our painter did not choose to represent his model smiling, but with a stoic and serious air, and an index finger raised towards the sky, which takes up the posture of the Archangel Gabriel during the Annunciation.

She looks at her future through this little mirror, which symbolizes beauty but also Prudence and wisdom.

The intense blue of her dress, made from the very expensive Lapis Lazuli, usually reserved for the toilet of the Virgin Mary, is also a nod to motherhood and the Christian religion.

Our portrait therefore dates from the years 1666-1667, which corresponds to the first pregnancy of the Duchess who was expecting the future Count of Vermandois (Louis de Bourbon 1667-1683).

Our dating is reinforced by the presence of Pierre Mignard in Paris at this time, with the king and Madame de la Vallière, as well as by the haircut "à la Hurluberlu" that the Duchess wears in our portrait and which corresponds perfectly to those years.

First intended for medicine, he entered the studio of the painter Jean Boucher in Bourges in 1624. Back in Troyes, he worked with a sculptor named François Gentil before leaving for Fontainebleau - capital of the arts at the time - where he studied Le Primatice, Le Rosso and Martin Fréminet. He painted the chapel of the castle of Coubert-en-Brie for Marshal de Vitry who took him under his protection and took him to Paris where he became a pupil of Simon Vouet and met Charles Le Brun (much later the two men will be in a situation of open rivalry), Eustache Le Sueur, and Du Fresnoy with whom he binds.

In 1635 he left for Rome where he met Poussin, perhaps the painter Sassoferrato and Anna Avolara, daughter of an architect, whom he fell in love with but whom he did not marry until 1660, following various obstacles. Having become famous in Rome, he was naturally called back to France by Louis XIV in 1657. 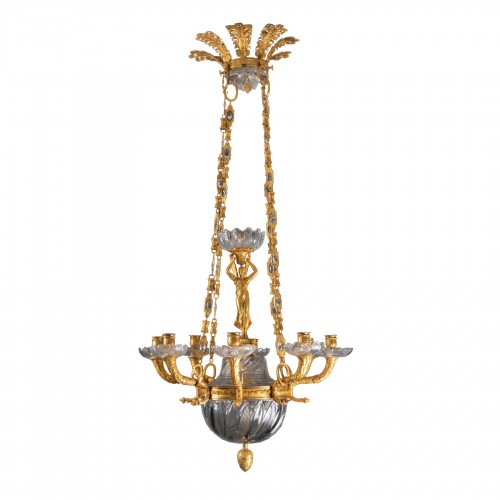 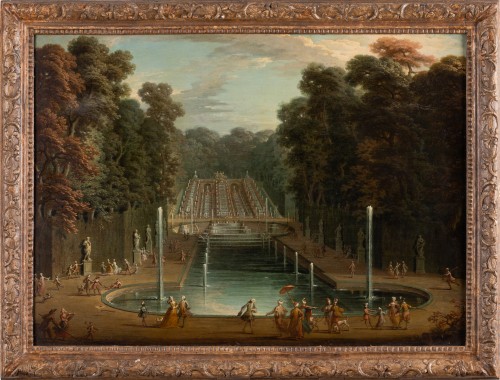