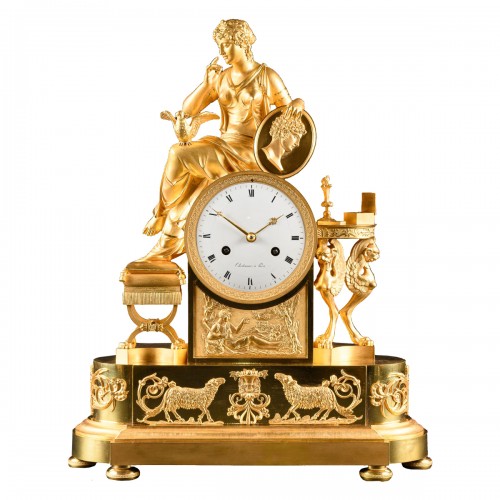 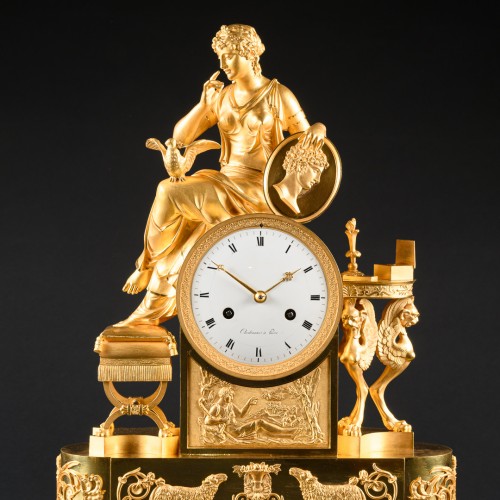 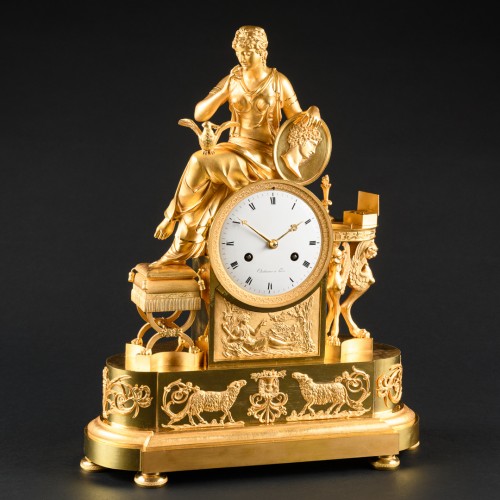 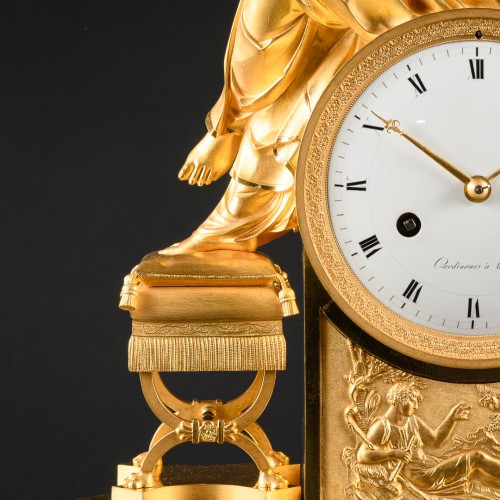 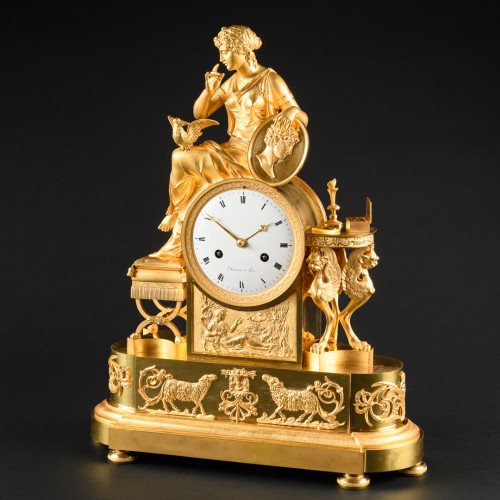 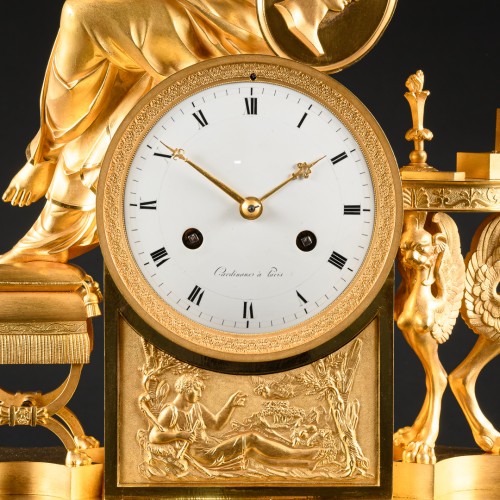 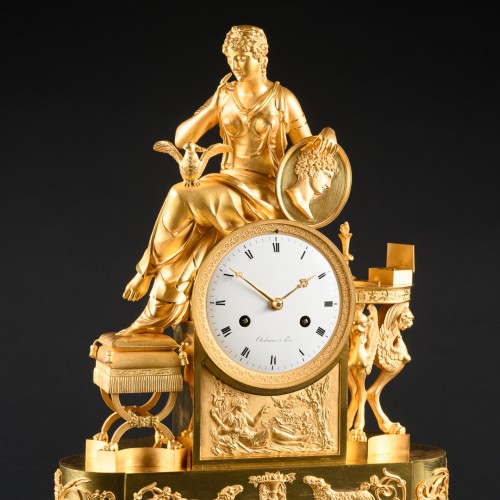 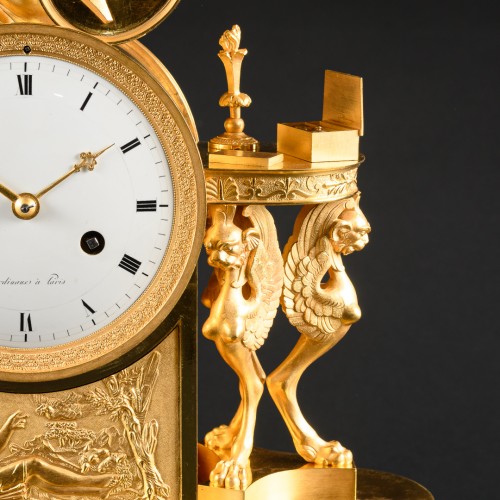 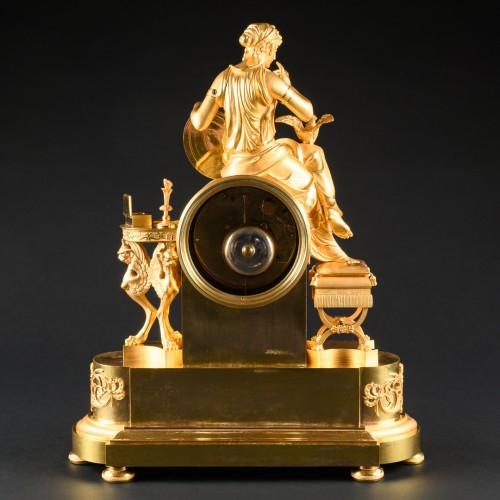 A very fine Empire gilt  bronze mantel clock attributed to François-Louis Savart (1780-1828) after a model by the same bronzier. The beautiful case of this Empire clock, is often referred to as ‘The Love Letter’. It shows a young woman in classical dress sitting on top of the dial drum. She holds in her left hand a portrait medallion of her lover while looking down toward a carrier pigeon. The pigeon sits upon her knee and holds a note, probably a love letter,  she has just written to her love.

An identical clock is in the British Embassy in Paris. It was originally owned by Napoleon Bonaparte’s sister Princess Pauline Borghèse (1780-1825) and was housed at her Paris residence at Hôtel Borghèse. Her residence later became the British Embassy. The inventory drawn up in 1814 lists the comparable clock in the Salon Jaune, where it still stands today on the mantlepiece flanked by a pair of candelabra attributed to Pierre-Philippe Thomire.

The white enamel dial with Roman and Arabic numerals and gilt bronze hands carries the signature Cardinaux à Paris. Cardinaux, listed in the Tardy dictionary of clock makers, was active 1800-1830 at the Boulevard Poissonnière in Paris. The movement with silk thread suspension and anchor escapement, strikes on the hour and half hour on a single bell.


The Design Of This Rare Empire Clock
The young woman rests her feet on an ancient Greco Roman style X-shaped stool or tabouret which stands to the left of the dial plinth. Also, to the right stands a tripod table with three winged monopodia supports. Each of these supports has a female bust and head and feet of a lion. On top of this table rest a writing box, a book (possibly her diary) and a lit candle in a candlestick. The candle in the candlestick alludes to the heat of the two lovers’ passion. The design of this clock is at the Bibliothèque Nationale, Cabinet d’Estampes 30,37 (compare Ottomeyer/Proschel).

Further, the pedestal frieze below the dial shows the receiver to be a young shepherd. He receives the letter, held in the beak of the same carrier pigeon, while resting in an Arcadian landscape. The especially finely worked details enhance the narrative portrayal of this beautiful Empire clock. The theme of the shepherd repeats itself on the rectangular base with rounded ends. Here we see see a pair of sheep flanking a vase of flowers issuing from a palmette. Finally the whole clock rests on six bun feet.

The tripod table, together with the X-shaped stool or tabouret were inspired by ancient Greco Roman design. They were one of a number of examples from antiquity that later shaped the decorative arts of the period. In all probability Savart’s designs for these two pieces of furniture were based on designs by Napoleon’s chief architects Charles Percier (1764-1838) and Pierre François Léonard Fontaine (1762-1853). Their designs were instrumental in shaping the Directoire and Empire style. A similar X-shaped tabouret by Jacob Frères of 1800, was part of a series of furniture supplied to Château de Malmaison circa 1800.


Details
The eight-days going movement has a wire suspension pendulum. It strikes the hour and half hour on a bell. The clock is in a excellent and perfect working condition. Also, it has recently been cleaned and serviced by a professional clock maker. The clock comes complete with its pendulum, key and bell.


François-Louis Savart (1780-1828)
The bronzier François-Louis Savart was born on 6 June 1780 and he worked for most of his career in Paris. Savart produced a variety of luxury bronzes from candelabra to clocks. When he designed the original model for this clock, he was established at 11 rue Philippaux. After he died we was buried in the cemetery of Père Lachaise, where upon his grave is a portrait bust of him modelled by the sculptor Sylvestre-Joseph Brun. 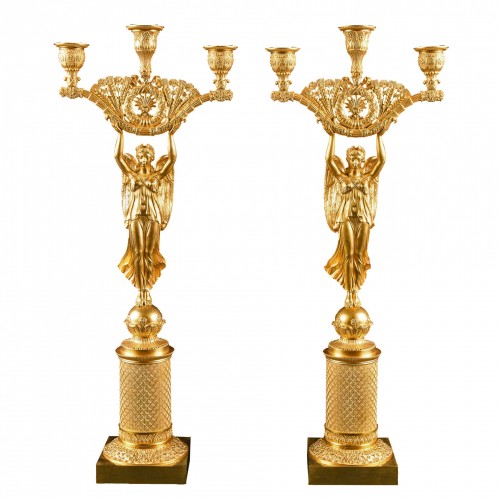 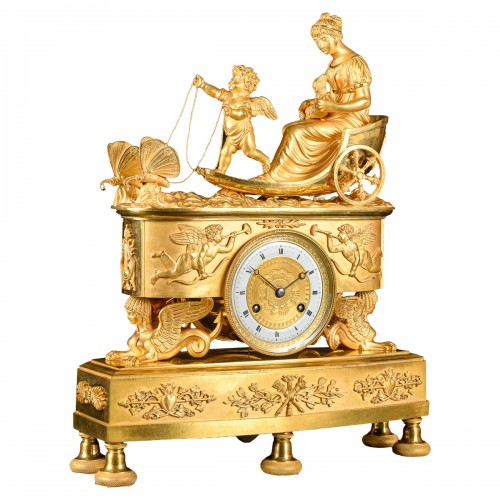 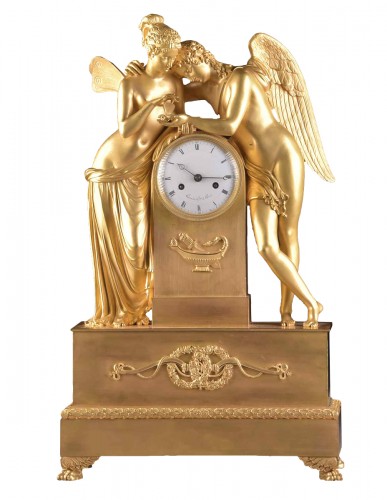