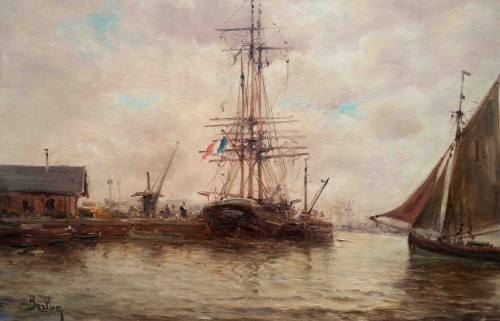 Oil on canvas measuring 81X54 cm (without the frame) representing a marine landscape with boats moored in a port, most certainly in the North of France or Normandy, with characters walking at the quay, signed Berthon, XIXth century century.

Official painter of the navy in 1904. Student of Fine Arts in Lyon in 1875-1877, then student of Pils and José Frappa in Paris. Began at the Paris Salon in 1880. He exhibited for 12 years at the Society of French Artists, then moved to the National Society of Fine Arts. (Bénézit extract)