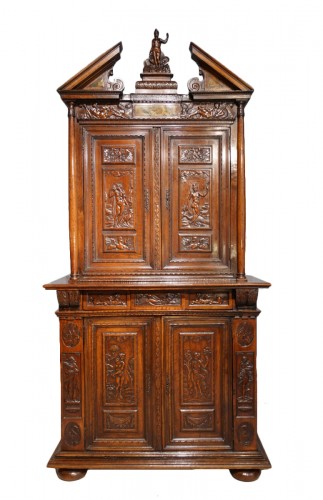 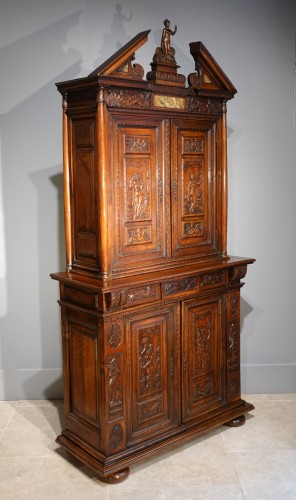 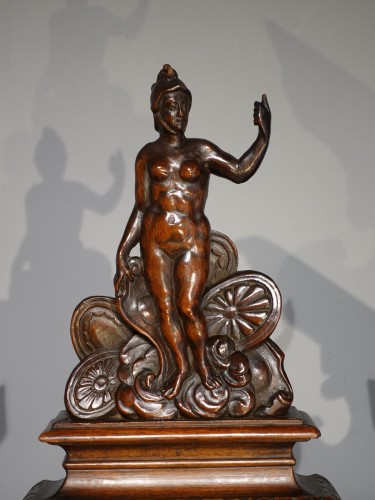 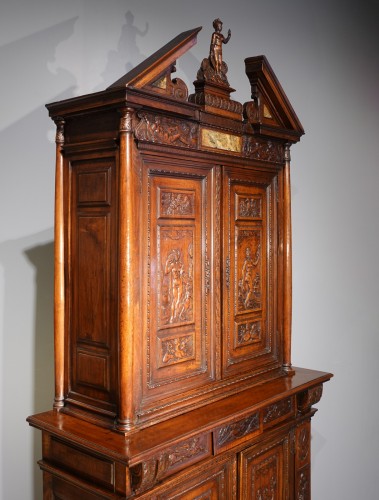 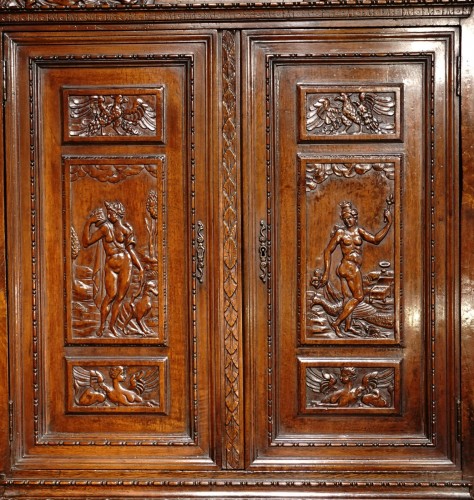 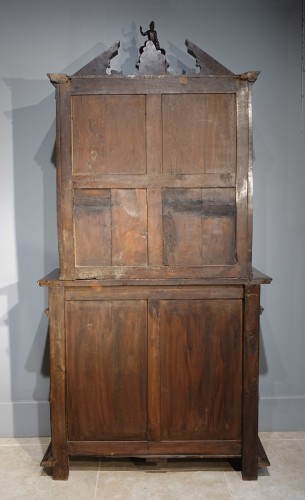 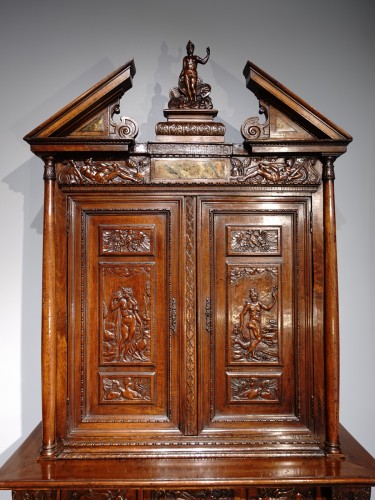 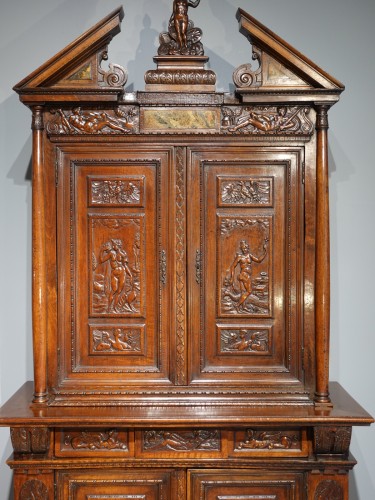 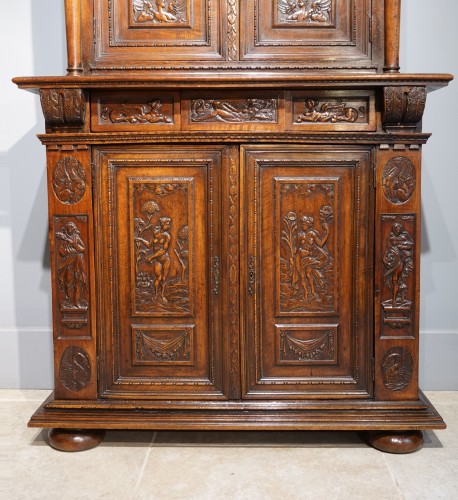 Sideboard two bodies, in walnut and inlays of hard stones from the late 16th century.
The facade of this rare piece of furniture is characteristic of the productions of the famous "School of Fontainebleau": the highly architectural facade resembles that of a palace with its triangular cornice (evoking the profile of a roof), columns ...
The upper body opens with two doors; the lower body has a large drawer in the belt as well as two doors.
In the decor we find mythological subjects and Christian allegories:
- In the center of the pediment there is a statuette of Athena / Minerva, the goddess of war
- On the upper rail are represented on both sides the allegory of strength (holding a column) and the allegory of justice (holding a sword)
- On the two doors of the upper body are the goddesses Artemis / Diana (holding a bow and accompanied by a greyhound) and Hera / Juno (wearing a crown and accompanied by a peacock)
- On the drawer the goddess Leda is represented lying down with a swan
- On the doors as well as on the uprights of the lower body four female figures evoke both the allegories of the seasons, the fertility goddess Demeter / Ceres (with a sickle) and the flower goddess Chloris / Flore (holding flowers )

Eagles, sphinxes, swans as well as drapes and foliage complete this rich decor typical of the French Renaissance.


historical annecdote
In the second half of the XVI ° century François Ier undertakes important works in his manor located in the forest of the Beer at “Fontaine à la Belle-Eau” (which will later become Fontainebleau)
There are the best painters, architects, goldsmiths, upholsterers, designers ... Thus the famous cabinetmaker Hugues Sambin works there. We are inspired by ancient monuments to create furniture of slender and harmonious proportions, sculpted with stunning decorations. 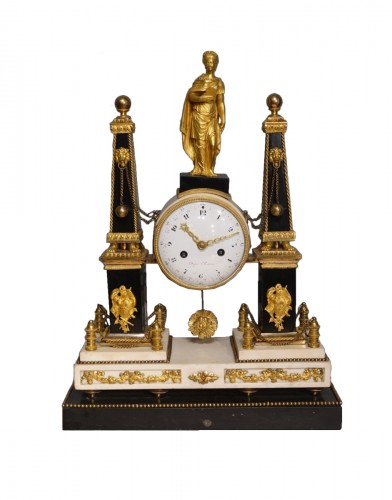 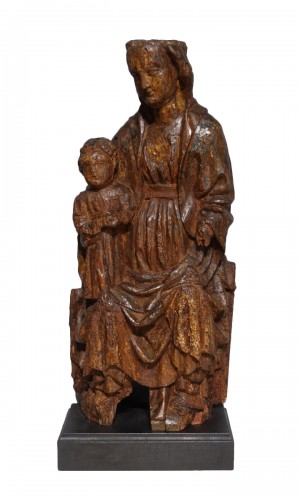 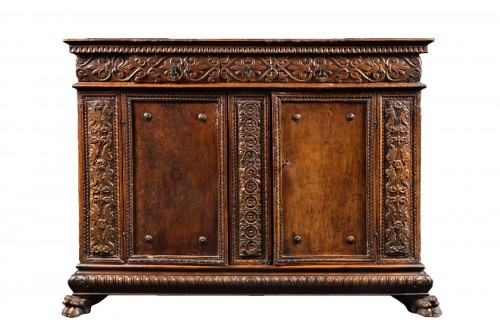 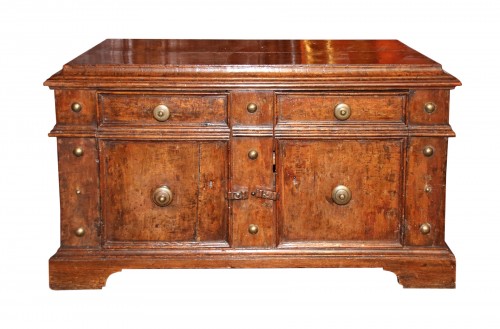 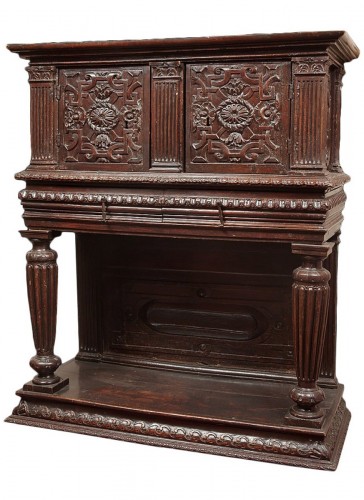 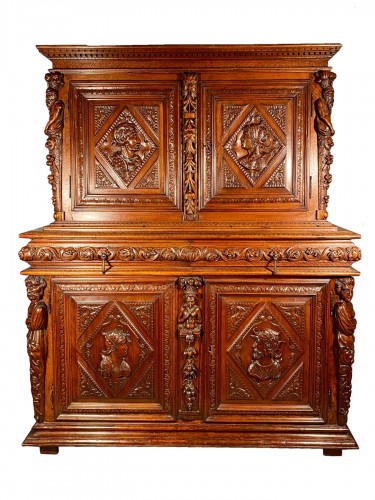