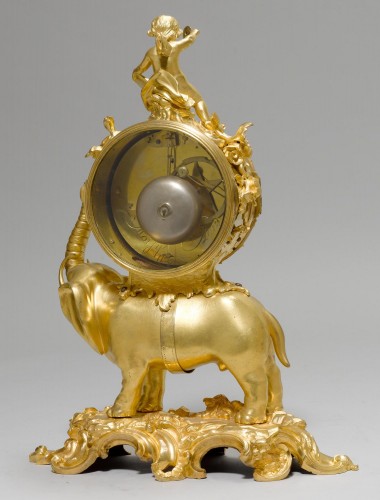 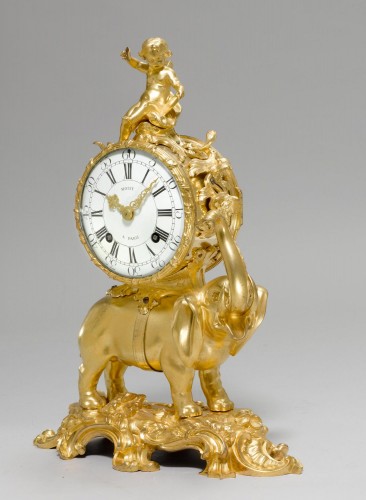 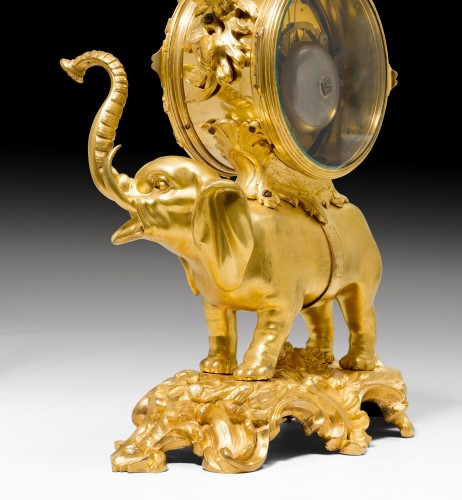 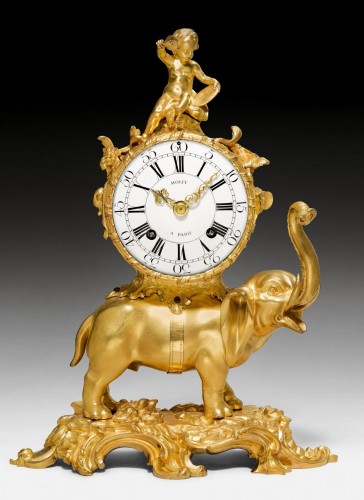 A very rare and highly important Louis XV gilt bronze Pendule ‘À L’Éléphant’ of month duration by the esteemed clockmaker Jean Moisy housed in a magnificent case by Jean-Joseph de Saint-Germain, signed on the white enamel dial Moisy à Paris and also signed and numbered on the backplate Moisy/ Paris/ No512. The dial with Roman and Arabic numerals and a very fine pair of pierced gilt brass hands for the hours and minutes. The very large drum-shaped movement with anchor escapement, silk thread suspension, striking on the hour on a single bell, with outside count wheel. The superb quality gilt bronze drum-shaped case surrounded by flowers and foliage and surmounted by a seated putto holding a shield in his left hand and a stylised fan in his right, supported by a girth upon the back of an elephant facing to the right with raised trunk and standing on a foliate cast rocaille scrolled base


This highly important clock received certificates of authentication by the leading experts Jean-Claude Sabrier, dated 15th April 1989 and by Jean-Dominique Augarde, 24th June 1989. It was also the subject of an article published that same year in “L’Estampille-L’Objet d’Art” (as noted above). In it Patricia Lemmonier notes that the fact that the entire clock case, including the drum, surmounting putto, elephant and base are all of gilt bronze makes it extremely rare since most comparable cases by Jean-Joseph de Saint-Germain feature a patinated bronze elephant. Furthermore, based on its superb quality and overall gilding, it is believed that this was the very same clock that was listed in the daybook of the marchand-mercier Lazare Duvaux (b. c. 1703 d. 1758), dated 15th December 1757, under no. 2952 with the following description and provenance Vendue à Madame de Montmartel - une pendule en bronze dorée d’ormoulu, dont le mouvement à sonnerie, de Moisy, est portée sur un éléphant - 600 livres. From this we can safely assume that the clock was sold by Duvaux to Marie de Montmartel (1709-1772), sister of the marquis de Béthune, who in 1746 became the third wife of Jean Pâris Montmartel (1690-1766). Madame de Montmartel’s husband, whose portrait was painted by Maurice Quentin de la Tour (1704-1788), was an extremely rich financier and a man of significant importance; Montmartel was a close friend of Louis XV, godfather to Madame de Pompadour and in 1721, the year of the latter’s birth, he was appointed Trésorier Général des Ponts et Chaussées, Secrétaire du Roi and later in 1762 Conseiller d’Etat. No mention of this clock was mentioned in the inventory made after his death on 23rd September 1766. It has been suggested that this was probably because it had previously been sold however it is more likely that the clock was still in the possession of Madame de Montmartel, who survived her husband by six years.

Clocks supported on the backs of elephants and other exotic beasts such as rhinoceroses and lions as well as bulls and wild boar are the most prized works of the eighteenth century. Made in limited numbers for the elite, they still continue to be highly sought after by collectors and connoisseurs alike. The two most famous bronziers to produce Pendules ‘À L’Éléphant’ were Jacques Caffiéri (1678-1755) and Jean-Joseph de Saint-Germain (1719-91), who proudly described himself as Saint-Germain, maître fondeur, ciseleur et modeleur fait et vend toutes sortes de boetes pour dorer en or moulu ou en couleur d’or, comme bronze..., boete elephantes, à lion, à taureau et autres, fait les desseins, et modelles en cire, le tout à juste prix. The present case compares exactly with a few others by or attributed to him, which in addition to those listed above includes one belonging to the Duke of Buccleuch at Drumlanrig Castle and another mounted on a musical box from the Bodenstein collection, sold in Berlin 6-7th April 1909, lot 79. Added to them is another dated 1747 with movement by Charles Baltazar and case with a patinated bronze elephant attributed to Jean-Joseph de Saint-Germain upon a musical box attributed to his father, previously sold by Richard Redding Antiques.

As one of the most celebrated bronziers of his age and an incontestable champion of the Rococo style, Saint-Germain produced clock cases and other works in gilt bronze for an exclusive and discriminating clientele. The son of an ébéniste Joseph de Saint-Germain (maître 1750) Jean-Joseph followed his father’s profession firstly working for Claude-Joseph Desgodets (maître-ébéniste 1749) who specialised in making clock cases. It was probably this connection that prompted Saint-Germain to specialise in clock cases. Although he was active as a bronzier from 1742 he did not become a maître until 1748. As a passionate amateur botanist, he delighted in incorporating elements of nature within his works which in addition to elephants included rhinoceroses, boars, fantastic creatures such as dragons and figures, to naturalistically cast flowers, foliage, palm fronds, water, shells and seed pods.
Jean Moisy (1714-82), who made the movement, was one of the finest clockmakers of his day. Born in Melun, the son of a grocery merchant, he first served in the Gatînais Regiment (1730-6) before pursuing a horological career. Jean-Dominique Augarde, in “Les Ouvriers du Temps”, 1996, p. 378, quotes that he was “Compagnon to the best clockmakers in Paris where he became so skilled that he was preferred to all workmen for the clocks and watches for the use of His Majesty, the Royal Household and the nobility of the Court”. In 1753 Moisy was received as a maître-horloger by a decree of that year exempting him from an apprenticeship qualification. In the same year he was established at rue de l’Arbre Sec, then in 1756 at Quai Malaquais on the place des Quatre Nations and finally at rue de Seine at the time of his death.

The present clock is numbered 512 on the backplate. Among other examples by him is one numbered 558, which was made for an extremely elaborate porcelain and bronze clock with mechanical organ, known as ‘Le Concert de Singes’ with case attributed to Jean-Claude Chambellan Duplessis (Musée du Petit Palais, Paris). Moisy movement no. 564 was made for a pendule ‘à l’étude’ with case by Edme Roy and supplied to the duc de la Roche Guyon. As one of the best in his profession, Moisy only used cases by the very finest makers who, in addition to Jean-Joseph de Saint-Germain and his father, included Philippe Caffiéri, the Osmonds, Antoine Foullet, Balthazar Lieutaud and Jean-Pierre Latz. A number of his dials were supplied by the esteemed enamellist Antoine-Nicolas Martinière while his springs were often by Charles Buzot, who only supplied the very best makers from his specialised workshop.

Moisy enjoyed a prestigious clientele, not least Louis XV for whom he made two clocks for Château de Saint-Hubert. However the majority of his clocks were sold through the marchands-merciers, including Charles Lebrun, Pierre-Simon de La Hoguette and especially the great Lazare Duvaux. In addition to the present example these were included in the collections of the ducs de Praslin and de Bouillon, the duchesse d’Enville, the prince de Talmont, the princesse Isabelle Lubomirska, Monsieurs Randon de Boisset, Bonnemet and Marin de la Haye. Despite his illustrious clientele and a brilliant repute Moisy was not an astute businessman and thus when he died in Paris on 3rd July 1782, he had been reduced to poverty. We, however, can still enjoy examples of his work, some of which are housed at the Musées du Louvre and Petit Palais in Paris as well as the Wallace Collection in London, Drumlanrig Castle, Scotland and Boston Museum of Art. 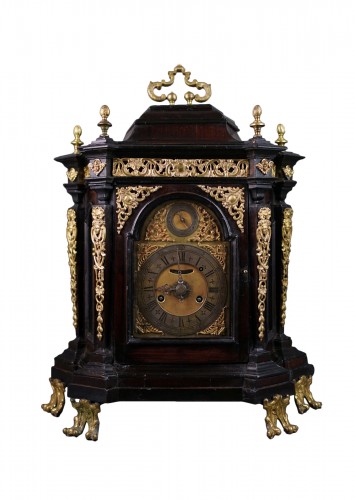 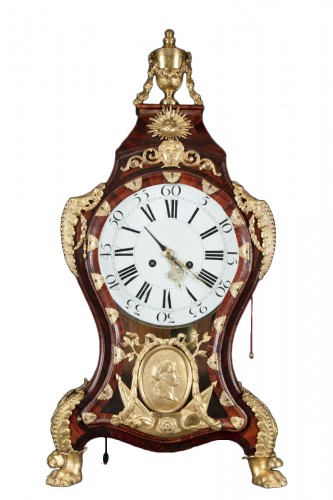 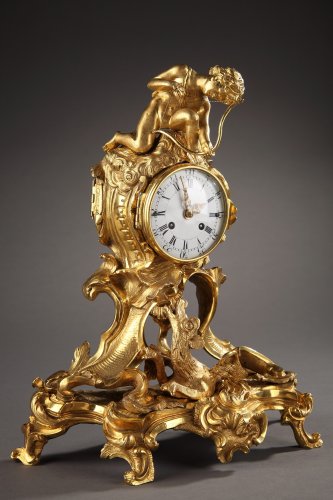