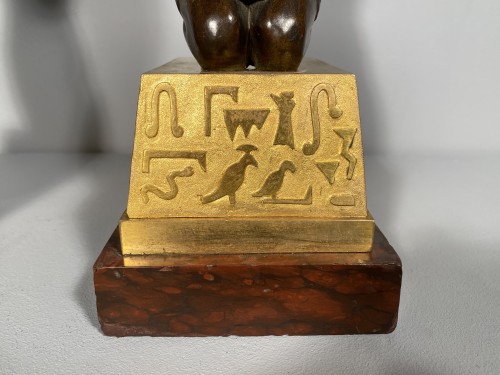 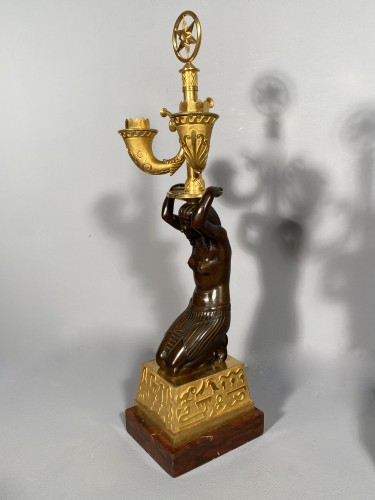 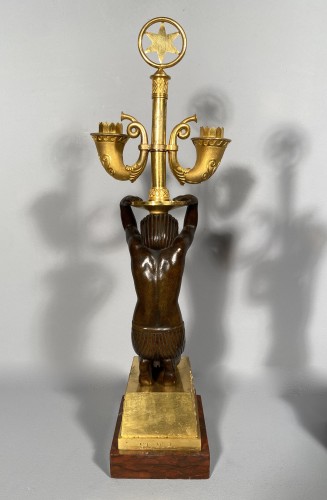 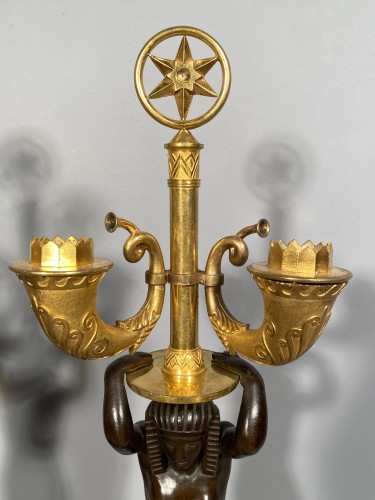 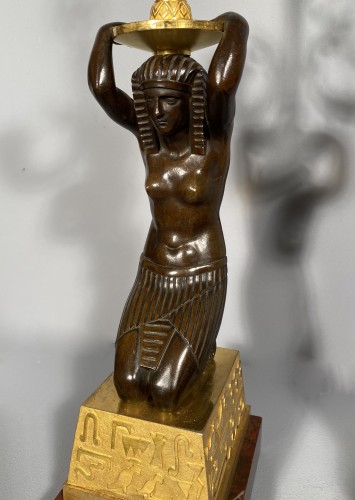 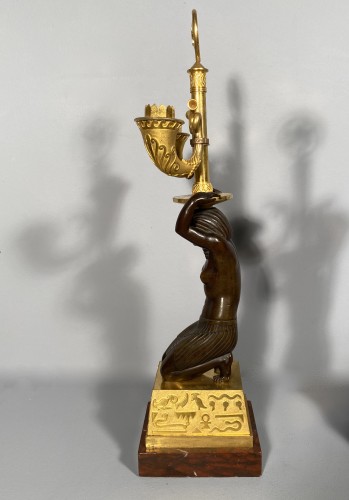 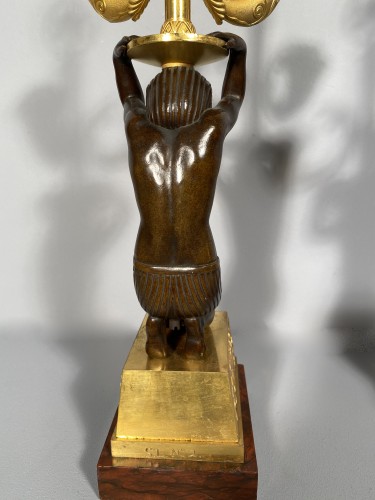 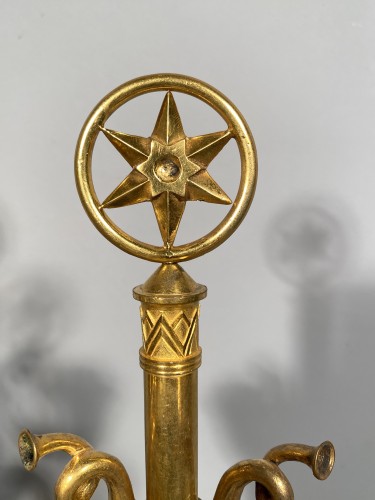 Rare pair of gilt bronze candelabra with two sconces.
Model decorated with kneeling Egyptian women; Dressed in loincloths and capped with nemes, they support on their heads a pole with two bouquets of lights in the shape of cornucopias decorated with palmettes and ending in trumpets.
At the top radiates a six-pointed star trapped in a bronze circle.
Imitating Egyptian temples, the sloping bases are finely carved with hieroglyphics.
They rest on rectangular plinths in cherry red marble.

Work by Claude Galle in Paris around 1804, for Louis Bonaparte and Hortense de Beauharnais at the castle of St Leu.

We independently present a clock "with the sphinx of Giza", matching the candelabra, with the same cherry red marble but not bearing the mark of St Leu.

* The inventory mark "StL N ° 2" is that of the castle of St Leu located in St Leu la forêt. (Val d'Oise)
In 1804, the younger brother of Emperor Napoleon I, Louis Bonaparte (1778-1846) and his wife, Hortense de Beauharnais (1783-1837), acquired the château d'en haut and the château d'en bas . They demolished the first and united the two estates to form a park of about 80 hectares. The park was then redesigned by Louis-Martin Berthault, who also worked at the Château de Malmaison. The upper part was embellished with factories (a Swiss valley with thatched cottages, the Devil's Bridge on a steep path and an Egyptian monument) while three ponds were created in the lower part. This garden is known from engravings such as that of Constant Bourgeois. After her separation from her husband (who took the title of "Count of Saint-Leu") in 1810, Queen Hortense kept Saint-Leu, where she gave brilliant festivals. In 1814, Louis XVIII made her Duchess of Saint-Leu but, in 1815, accused of having helped prepare the return of Napoleon I, she took the path of exile and had to abandon the estate.

-Louis Bonaparte and Hortense de Beauharnais at the castle of St Leu
As with many other objects from St Leu:
-Probably Elisa Napoléone Baciocchi Princess of Lucca and Piombino (born in Lucca, June 3, 1806 - died in Colpo, February 3, 1869)
-Then by descent until the sharing of the Baciocchi estate on June 22, 1924 at Ile Rousse in Corsica.
-Private collection New York

-Museum of Art and History of Geneva

Following the Egyptian campaign led by Bonaparte between 1798 and 1802, a new fashion settled in France: Egyptomania.
She frantically touched all areas, sculptures, paintings, furnishings, clothing ...
One of the most fervent admirers of this new style was Hortense de Beauharnais.
Unlike her husband who was more withdrawn, Hortense directed the decoration work of their many residences and spent lavishly.
It is undoubtedly she who had the idea of ??moving the park of Chateau de St Leu in the manner of the Trianon of Marie Antoinette, that is to say with factories and especially a monument in the form of an Egyptian temple from where are probably from our candelabra.
In 1803, Hortense also directed the work to move in the Hôtel de Beauharnais, which belonged to her brother.
The sums spent were such that public opinion was stirred and the emperor, very revived, threatened to requisition outright the hotel.
Indeed it did not skimp on the means and made in the grandiose with there also an entrance porch in the form of an Egyptian temple and matching furniture made under the orders of the architect Laurent-Edmé Bataille and the furniture administrator. imperial, Étienne-Jacques-Jérôme Calmelet-Durozoy.
It is therefore probably in collaboration with the latter two and from the drawings of the collection by Dominique Vivant-Denon "Voyage dans la basse et haute Egypt", published in 1802 that the famous Parisian bronzier Claude Galle (1759-1815) produced. several models of Egyptian candelabra for furnishing these residences in the years 1803 and 1804.
It is also quite possible that the pair we are presenting is the first prototype of this model, made especially for the Château de St Leu before our bronzier marketed other rare examples in the following years.
In perfect condition, with their exceptional decor and their pro 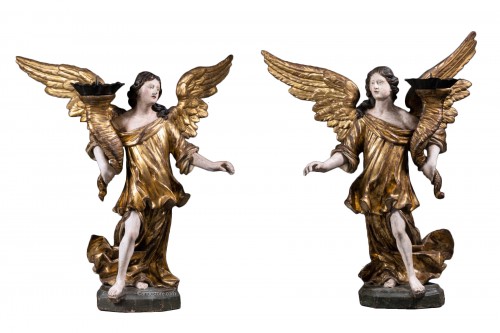 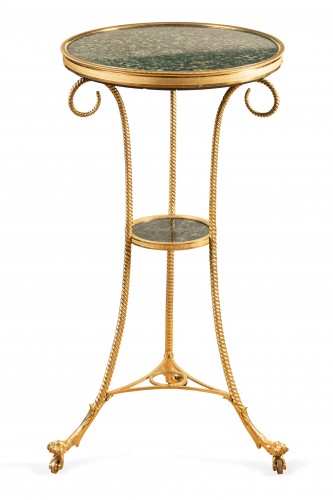 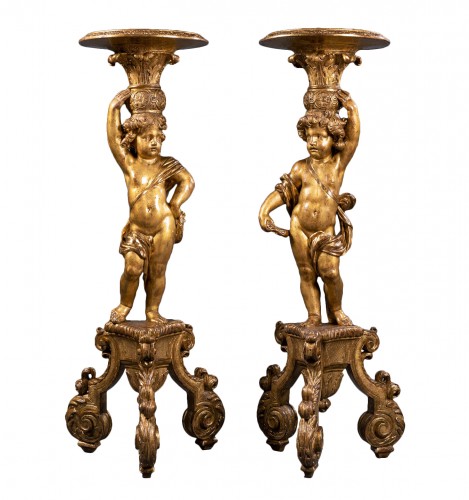 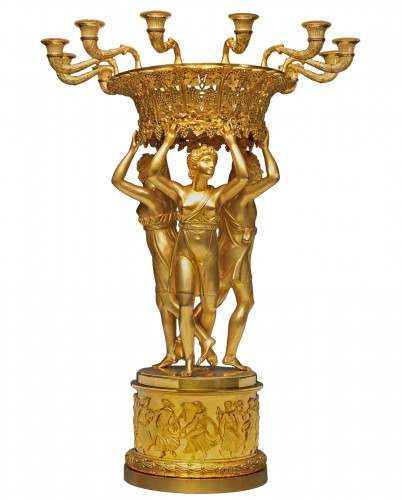 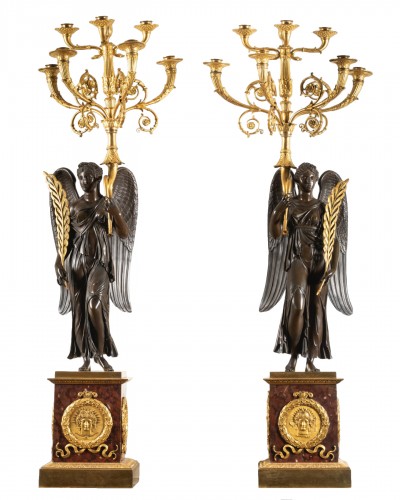