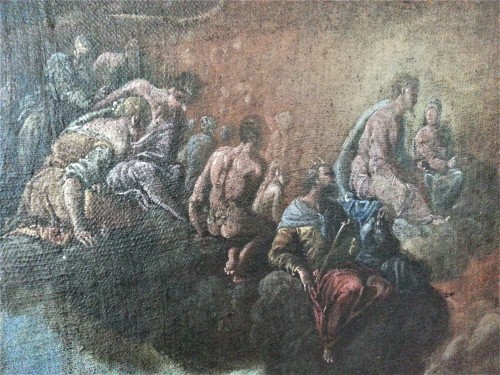 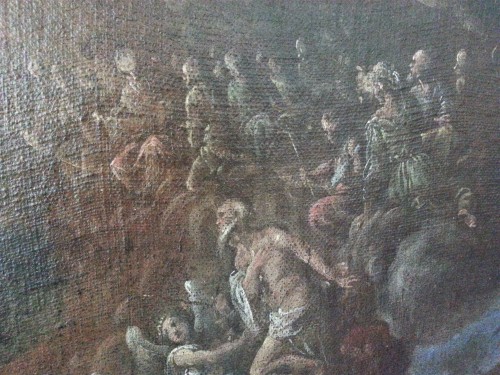 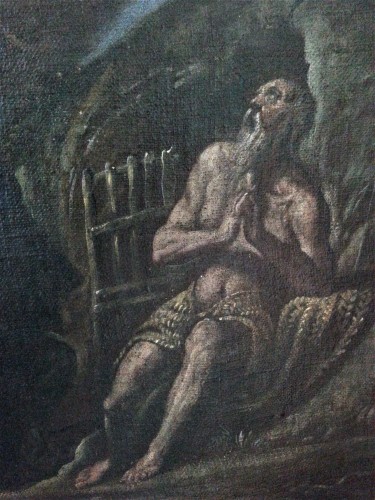 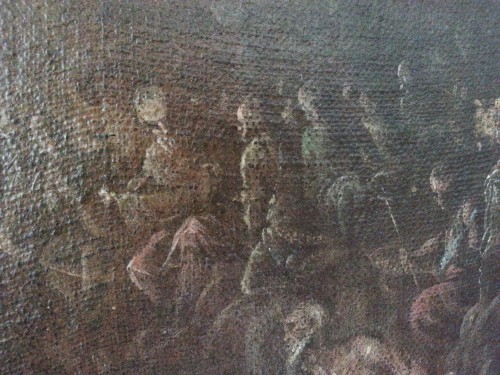 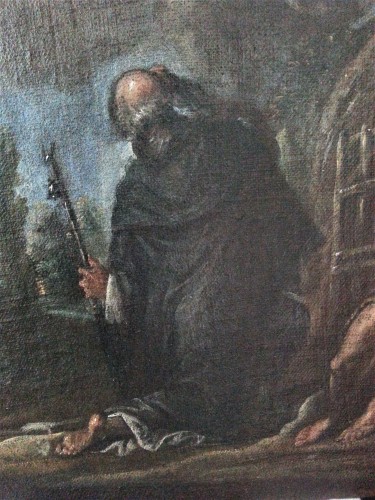 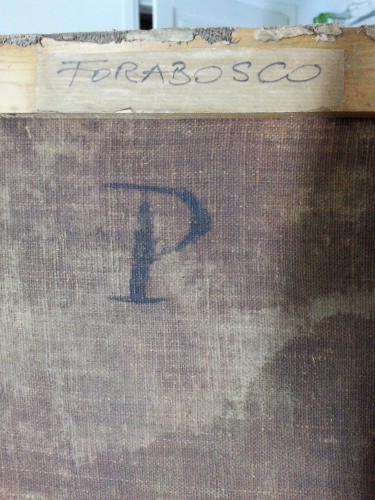 The present painting depicts three moments in the life of St. Paul of Thebes (Egypt, about 230 - Thebaid, about 335), considered by the Christian tradition the first hermit. Paul, a young Egyptian from a rich family who converted to Christianity, was forced to leave his city during the persecution of the emperors Decius and Valerian because he was denounced by his family wishing to take possession of his fortune. He then found refuge in a cave in the mountains of the Thebaid desert where a palm tree was located. From the plant Paolo drew leaves that he woven to make his dress and dates with which he fed up to the age of 43, when a crow began to bring him a piece of bread every day to feed him. Shortly before his death he received a visit from Sant 'Antonio Abate, who took care of his burial in a pit dug by two lions. In the painting we see in the foreground the two saints who contemplate the assumption of Saint Paul in the presence of the Trinity. In the background, Sant’Antonio Abate buries San Paolo.

The author of the work is to be recognized in the Francesco Maffei in Vicenza, who here transfused all those characteristic features that make his paintings unmistakable. Maffei probably learned the art of painting probably in the Maganza workshop in his native Vicenza, a city where he also had the opportunity to compare himself with the works of the great Venetian masters that he could observe here: we remember Paolo Veronese, Jacopo Bassano and Jacopo Palma il Young. The Venetian stay of the late thirties (around 1638) was decisive for the complete maturation of the style of Maffei, who dedicated himself with renewed enthusiasm to the study and copy of the masters of the past. Tintoretto in particular, whose works were scarce in Vicenza, was an inexhaustible source of inspiration for monumental and highly articulated compositions, chiaroscuro contrasts, fatty matter alternated with light glazes. The style that the artist from Vicenza developed from this period resulted in quick brushstrokes with which he sketched the volumes, warm and lively colors, physiognomies tending towards the grotesque, bold foreshortenings and accentuated twists of the bodies of tintorettesca ancestry. These features can be found in the present painting which shows in the upper part of the painting an almost impalpable pictorial material made up of rapid brush strokes (especially with yellows, pinks, mother-of-pearl in a dreamlike atmosphere), luminous and soft colors that are very reminiscent of Paolo's Veronese, elongated and incurved characters.

More specifically, in Saints Antonio Abate and Paolo Eremita Maffei diversifies the various narrative moments through the use of differentiated stylistic figures, which give an account of his artistic reference points: Paolo Veronese and Tintoretto. The upper floor, which shows St. Paul of Thebes welcomed into the sky, sees light colors stretched in an imaginative and light manner in the Veronese area on a dazzling backdrop in the center and dark at the end where the newly sketched faces of the saints blend into the air and transmute in almost carnival expressions; in the foreground and in the background, which belong instead to the earthly world, the artist portrays the two saints in a more naturalistic way and with more fat and full-bodied colors. Sant’Antonio Abate's twist cannot but refer to the elongated and twisted figures typical of Tintoretto.

We do not know if the present work is to be considered a preparatory sketch or an autonomous work. It should date back to the mid / late 1640s, when other works were also fired, both private and public, with which it is possible to establish a fruitful comparison. Let's start with the Birth of St. John the Baptist in a private collection (oil on canvas, 74 × 101 cm) painted around the middle of the fifth decade of the seventeenth century.


The Birth of St. John the Baptist shows a descriptive dynamic similar to that of the present painting; the eye of the observer is led from the central area at the bottom, where the newborn Giovanni is admired by some handmaids, to the one at the top left where we see the elderly mother Elizabeth. The foreshortened pose of the latter, intent on observing something outside the pictorial space, is very reminiscent of that of St. Paul. On the right is the vision of Father Zacharias in the Temple of Jerusalem. Here, while he was carrying out his function, the archangel Gabriel announced the birth of a son. Since Zacharias did not believe him, Gabriel made him mute until his announcement came true. In the painting the angel puts his hands on Zaccaria's head in the act of taking the word from him. This scene, which is placed in the world of vision, is treated by Maffei in the same way that in Saints Antonio Abate and Paolo Eremita the assu