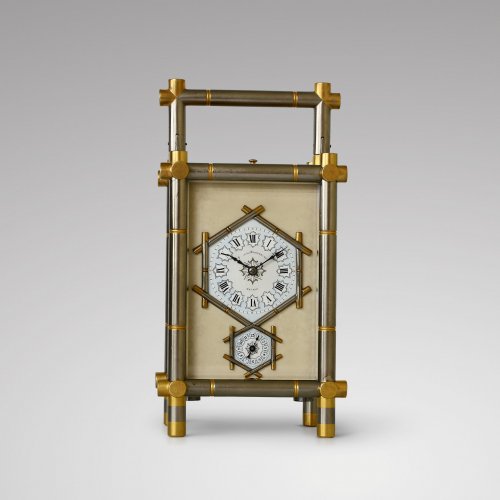 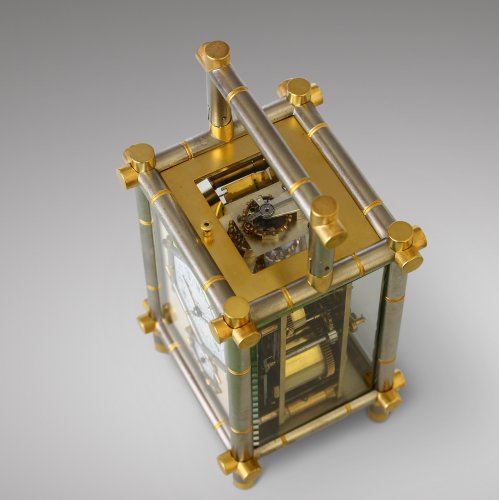 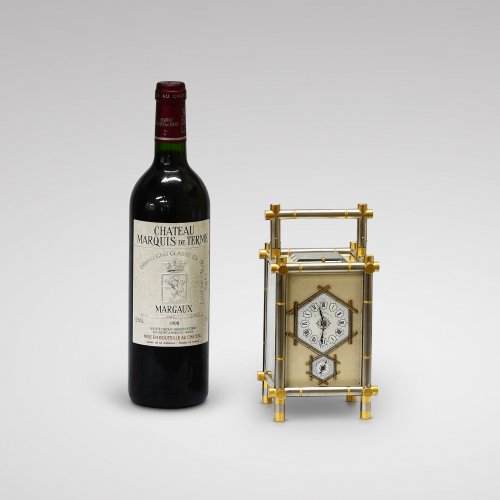 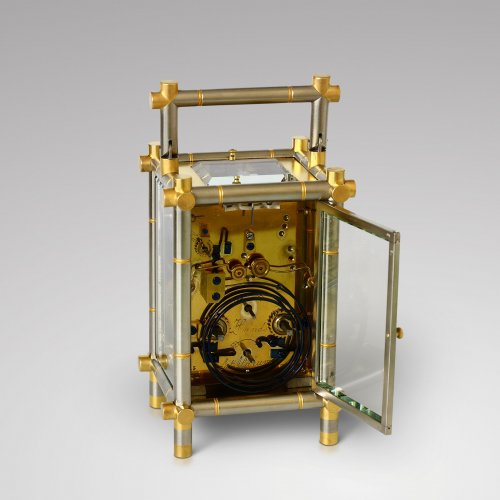 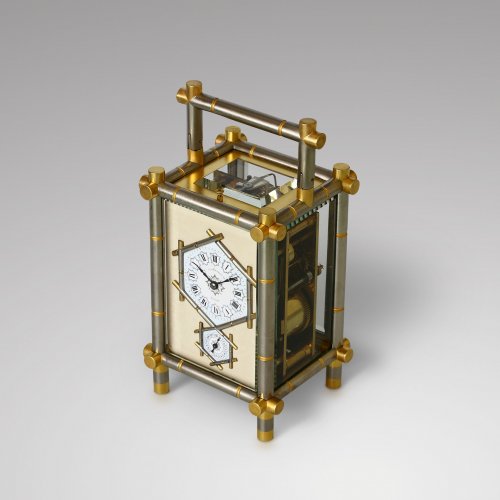 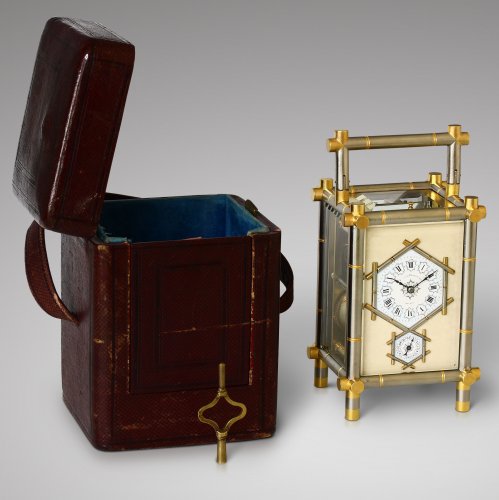 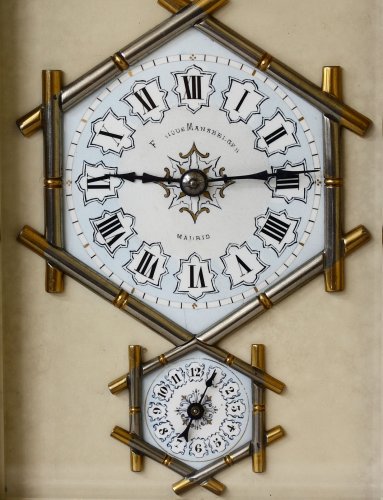 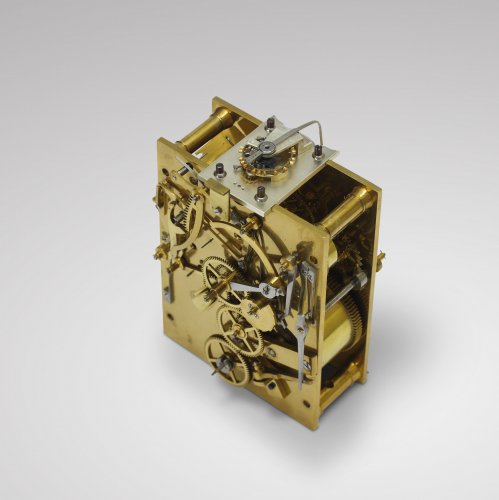 LP is the signature of Paris-based clockmaker Louis-Auguste Pointeaux (1809-1885). He invented a coup perdu escapement that was used on mantel clocks with half-seconds beating pendulums, and some very sophisticated travelling clocks with up to 12 winding holes (!). He exhibited in London in 1852. He created the large longcase clock, presently at rue de Rivoli in Paris, for the firm C. Detouche. He was established at Rue Chérubini from 1850 to 1880.

Bamboo as an ornament in the decorative arts first appeared with the fashion for japonaiserie introduced in France during the Universal Exhibitions of 1867 and 1878. Originating in the Far East, this plant motif was subsequently employed, for its numerous decorative possibilities, by the most famous designers of the period, like Emile Reiber, head of Christofle’s workshop, René Lalique, Emile Gallé, and Eugène Rousseau. Isolated or combined with other motifs of oriental inspiration, the bamboo motif was used to decorate the most splendid pieces of silver and tableware, vases and mantelpiece garnitures.
Bamboo also became fashionable with the creation of conservatories, or greenhouses, that so characterized the social art of entertaining under the Second Empire; bamboo and rattan pieces of furniture featured prominently in the immense greenhouses that became reception rooms in their own right. Founded in 1879, Perret-Vibert, known later as Maison des Bambous, became the firm of reference for bamboo products, as witnessed in this contemporary report in Le Figaro: “It is sheer folly at Perret-Vibert’s on rue du Quatre-Septembre…Indeed, [the shop] is known mostly for its distinctive pieces made of natural bamboo, so fitting for the décors of private mansions, a château, villas or summer retreats. It is to [them] that we owe the creation of these original yet comfortable chairs, these light and elegant jardinières inspired from the décor at the Trianon, that bring a unique and personal touch to any residence. […]Their wall decoration is also nothing short of delightful – bay windows and mirrors framed with twines of bamboo, friezes and mouldings embellished with Chinese and Japanese elements…It complements the style of the furniture perfectly.’ (Carel du Ham, ‘La vie de Paris – Le Moment du Départ’, Le Figaro, 18 May 1903, p. 1.)
Durably influencing the history of artistic taste, natural or simulated bamboo was a key decorative element of the latter half of the nineteenth century. Associated here with the design of small clocks, the bamboo ornamentation finely enhances the angles and contours while adding the charm of an exotic touch. 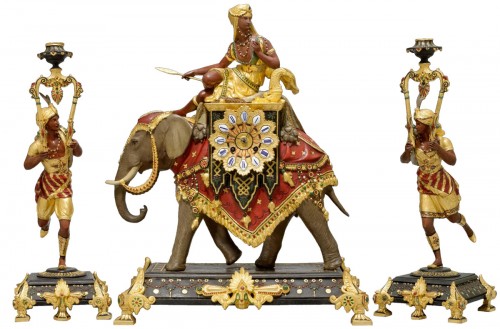 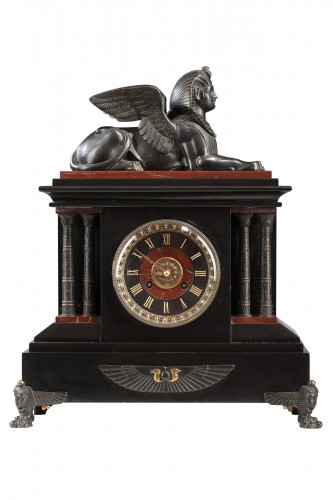 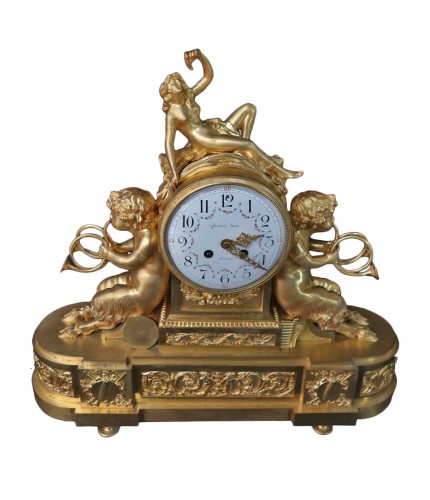 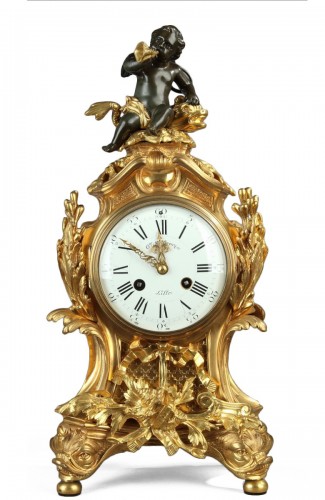