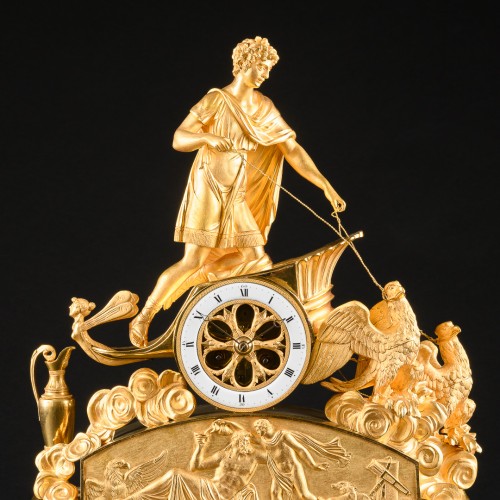 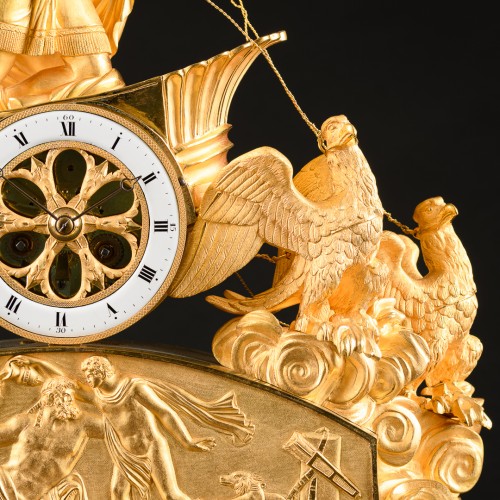 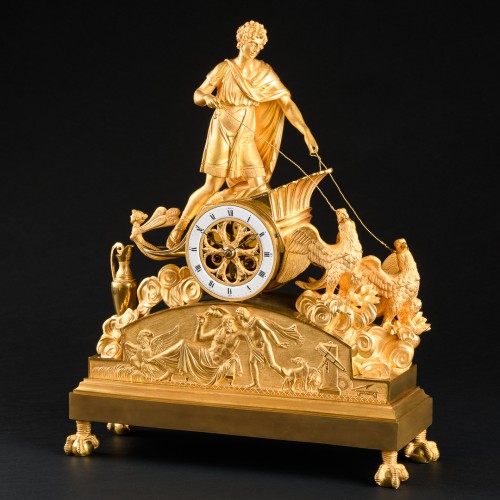 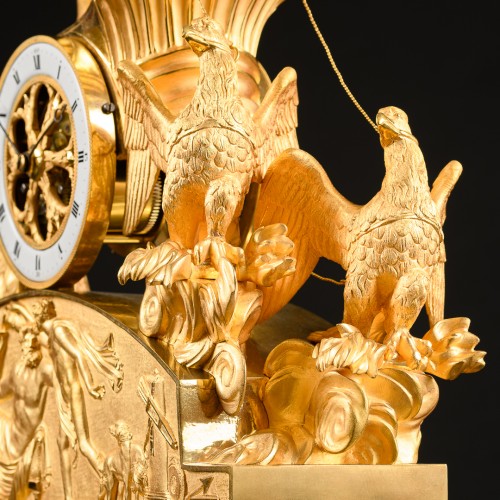 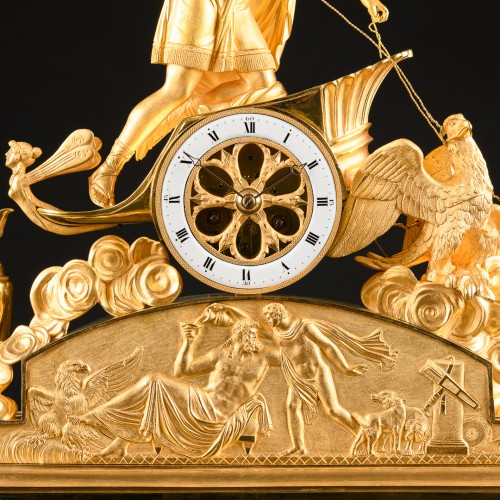 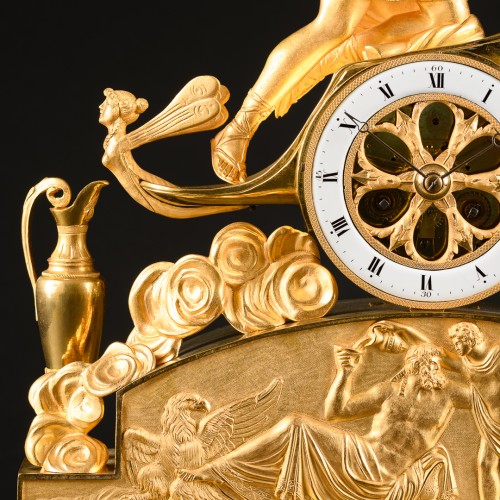 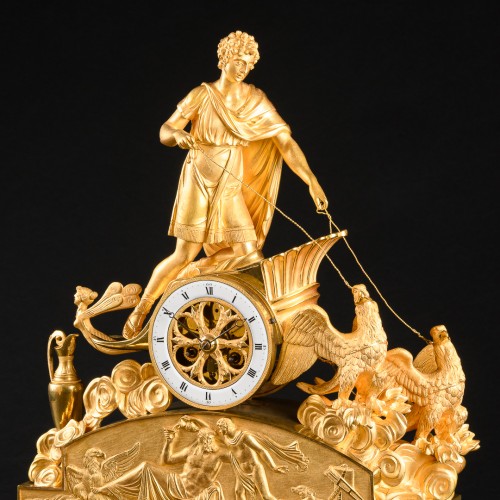 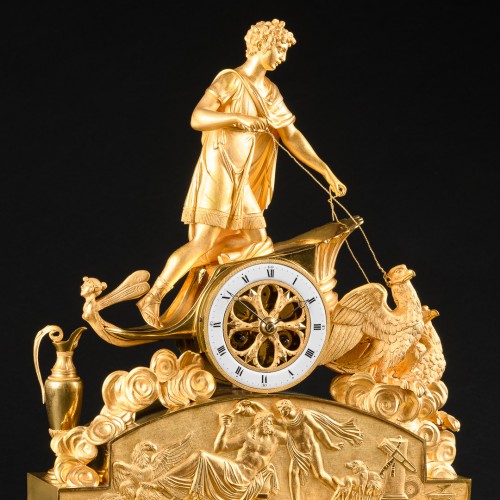 Fascinating gilt bronze Empire chariot clock surmounted by a figure of Ganymede riding through the skies in Zeus’ chariot pulled by two eagles. On the left side we see a classical ewer with snake shaped handle. The design of this Empire clock is attributed to Pierre-Philippe Thomire.


Further, the white enamel dial is inscribed in the wheel of the chariot. It shows the hours in Roman numerals and quarters in Arabic numerals. The whole scene rests on a base decorated with a bas-relief representing Ganymede, cup bearer of the gods, pouring nectar to Zeus. Also, this bas-relief depicts military trophies, an eagle and a pair of dogs. The case stands on claw feet enclosing a flattened ball.


Chariot clocks were very successful at the end of the 18th and beginning of the 19th century. This is evidenced by the great diversity of models using this motif made by top bronziers of the time like Pierre-Philippe Thomire. Usually the dial is mounted in or is part of the wheel of the chariot. Sometimes the chariot is driven by a putto or a deity and led most often by horses but also by dogs, tigers, swans or in this case by eagles.


Details
This unique Empire clock presents itself with it’s original mercury gilding in an excellent state of preservation. It’s movement has anchor escapement, twin barrels, silk thread suspension and outside count wheel and strikes the hours and half hours on a bell. The clock is in an exceptional and perfectly working condition. Also, it has been cleaned and serviced by a professional clock maker. The clock comes complete with its pendulum, key and bell.


Mythology Of Ganymede
Ganymede is a figure from Greek mythology who was the son of King Tros, the founder of Troy, and the shepherd of his father’s cattle. Because he was – as Homer says – “the fairest of mortals”, the gods had a crush on him. Consequently they took him to mount Olympus for the sake of his beauty, so he might be among the immortals. Homer tells that his father received a number of horses from Zeus as compensation. In later versions, it is Zeus himself who robbed him in the guise of an eagle and took him to Olympus where the boy became his wine-pourer. This latter version is the one we can read in Ovid’s Metamorphoses.


In 1804 Thomire acquired the business of the marchand-mercier, Martin-Eloi Lignereux. The company employed a large workforce in a workshop at rue Boucherat and a showroom at rue Taitbout. From there Thomire retailed a large range of decorative objects inspired by antiquity including candelabra, extravagant centrepieces, clock cases and monumental Greek and Roman style urns and vases.

Pierre-Philippe Thomire was the greatest craftsman of his age to work in gilt bronze. He was patronised by Louis XVI, Napoleon and Louis XVIII as well as foreign monarchy and aristocracy. Thomire’s fame and notoriety was then propelled to even greater heights after the Revolution when in 1806 he became the first bronzier to be awarded a gold medal at the Exposition des Produits de l’Industrie. In 1809 he won another gold medal and was also appointed ciseleur de l’Empereur. In addition to Napoleon himself, Thomire was patronised by the Emperor’s family and many foreign royal courts. Because of the large number of pieces Thomire supplied to the palaces, his firm became fournisseur de leurs majestés (Furniture Suppliers to their Majesties) two years later. His work represents some of the finest examples of the Empire design.


At the height of his business, it is estimated that Thomire employed six or seven hundred workers. Thomire retired from his firm in 1823. 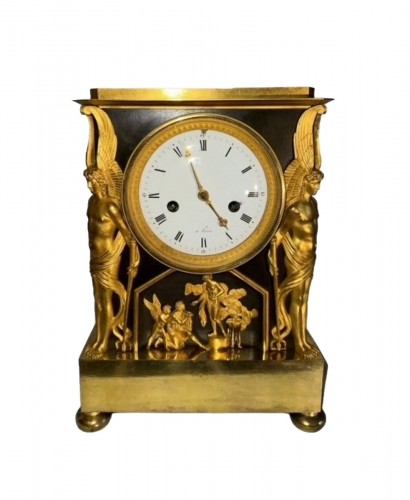