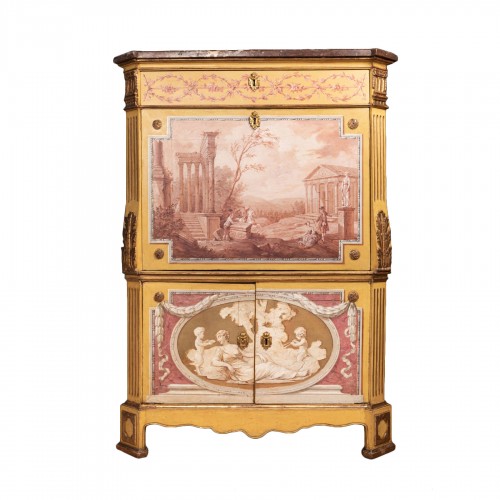 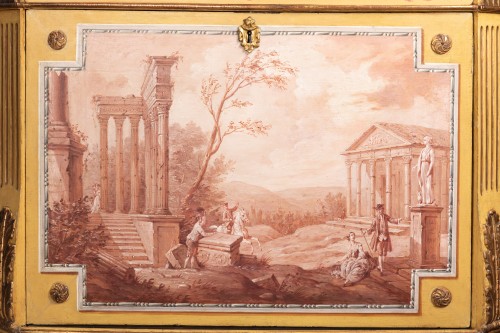 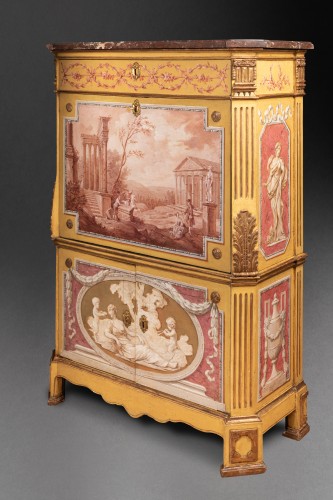 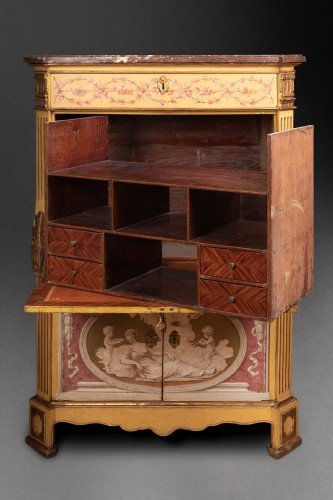 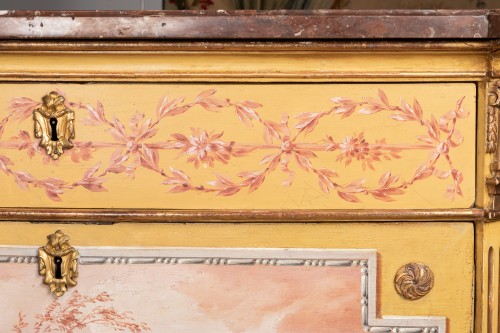 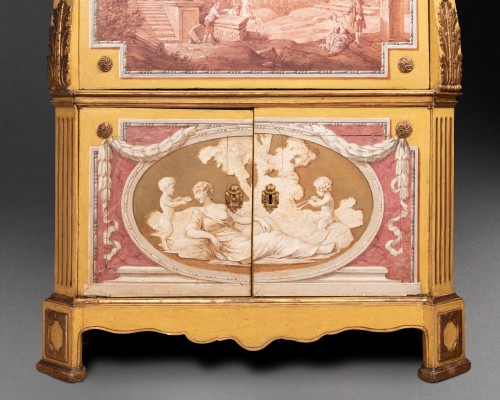 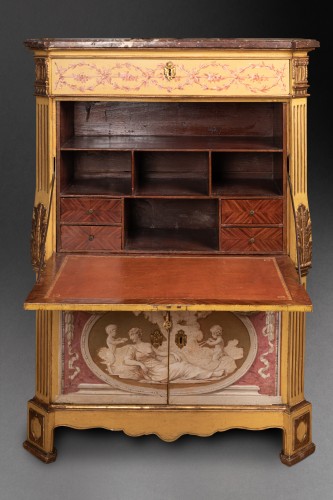 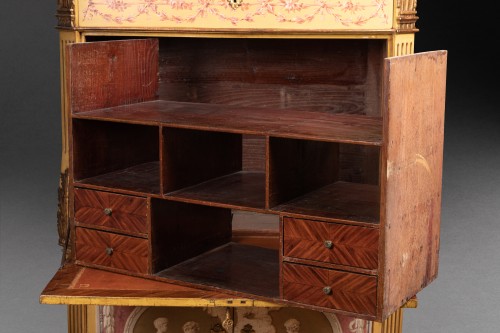 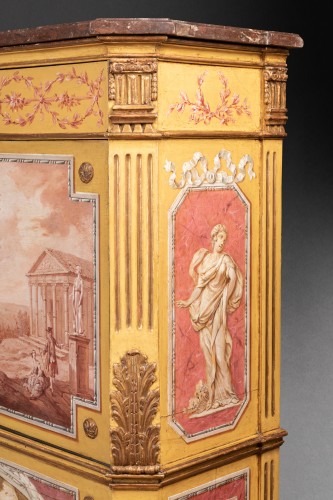 Rare model with large cut sides which opens with a drawer and a flap in the upper part, and with two panels in the lower part. The interior reveals a theater composed of four drawers and five compartments.
The whole is decorated on all sides in yellow Martin varnish of daffodil type, with neo-classical reserves imitating sanguines and grisailles.
The upper part is surrounded by a frieze of interlaced flowers and olive leaves.
The flap is decorated with a magnificent scene imitating a sanguine by Hubert Robert (1733-1808) representing various characters in an environment of ancient ruins (temples, columns, etc).
The lower part, decorated with a Greek reserve, features a medallion topped with garlands of laurels. The latter illustrates a scene representing Venus accompanied by two young musicians.
The scene, inspired by the productions of Piat Joseph Sauvage (1744-1818), is treated in grisaille, imitating a marble bas-relief, while the background of the reserve simulates red marble.
The high reserves of the sides are decorated with antique goddesses and the low reserves with Greek-style cassolettes.
All the ornaments (cornices, spandrels, flutes, acanthus leaves) in gilded wood imitate bronze. The interior decoration (drawers and inner sides of the flap) is in Martin varnish in imitation of precious wood marquetry.

Parisian work of a workshop of varnishers in the Faubourg Saint Antoine, circa 1780, probably under the orders of René Dubois*.

-      Collection of the Princes of Sagan, Talleyrand-Périgord family, at the Château du Marais, Île-de-France.
Close secretaries by René Dubois :

-      Musée du Petit Palais, inventory number ODUT 1506.
-      Christie's Paris, March 31, 2011, lot 733 (361,000 euros).
Our opinion:
Our secretary in Martin varnish follows the main principle of René Dubois' productions, i.e. scenes in cameos in very vivid polychrome frames, and is part of a very small corpus of furniture made in Paris, in the years 1780-1790. It is very likely that the son of the great cabinetmaker Jacques Dubois sold all of this furniture in his store, rue Montmartre. Indeed, after having spent about twenty years making furniture himself in his father's workshop, which he took over in 1763, he devoted himself solely to selling it from the 1780s onwards. As indicated by some of the furniture bearing his stamp, he seems to have made a specialty of these pieces of furniture in Martin varnish, which he probably ordered from a workshop in the Faubourg Saint-Antoine. The decoration is innovative and corresponds to the period of emancipation of French lacquer. After decades of trying to penetrate the secret of Chinese and Japanese lacquers, several workshops met success by developing a varnish capable of imitating Asian productions to perfection. Gaining experience, Parisian varnishers will start to emancipate themselves from the oriental model by using new colors, especially blue, pink and yellow.
If at first the decorations were influenced by China, very quickly, from 1760, French decorations started to be inspired by the productions of François Boucher, Oudry, Huet, etc... It is in this context that our secretary was produced, with the latest fashionable decorations, influenced by the rediscovery of the great ancient sites such as Pompeii and Herculaneum. This neoclassical production, inspired by the greatest French painters, represents the quintessence of French lacquer. Our secretary with its rare decoration and prestigious provenance is quite simply a museum piece.
*Son and pupil of the great Jacques Dubois, René Dubois took over his father's workshop on rue de Charenton in 1763 and became a partner with his mother. Although he obtained his master's degree at a very young age, he continued to use his father's stamp. He quickly acquired great notoriety. In 1779, "L'Almanach Général des Marchands" mentions him as the Queen's cabinetmaker. His productions were very important until 1780, the year of the acquisition of a store on rue Montmartre, a store only dedicated to the sale of furniture. He stopped his activities at the beginning of the Revolution. If, because of their common stamp, the neo-classical furniture cannot be attributed with certainty to René Dubois, on the other hand, the productions of the Louis the XVIth style are without hesitation. His works are very architectural and show a clear preference for secretaries. These, of narrow and severe form, are mainly covered with lacquer or varnish of Chinese taste, often surmounted by a showcase or an upper body in the shape of a pagoda, and framed by bronzes arranged geometrically. There are also secretaries made of veneered wood. 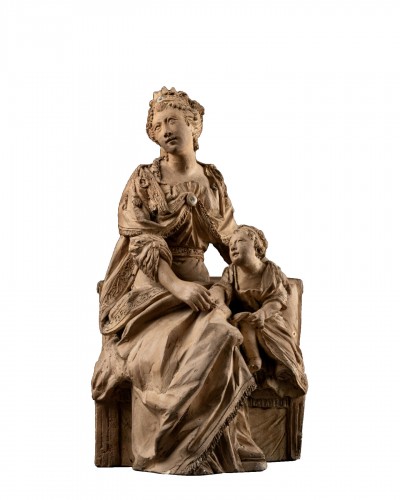 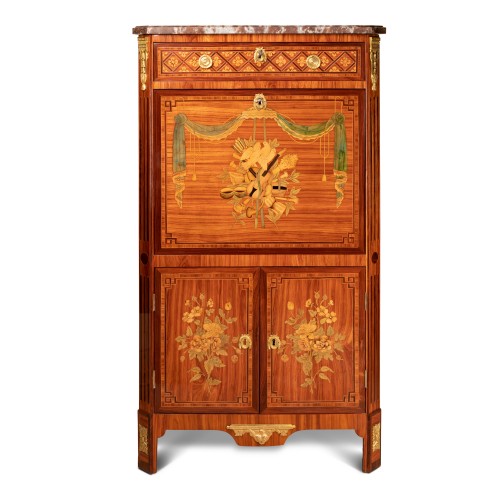 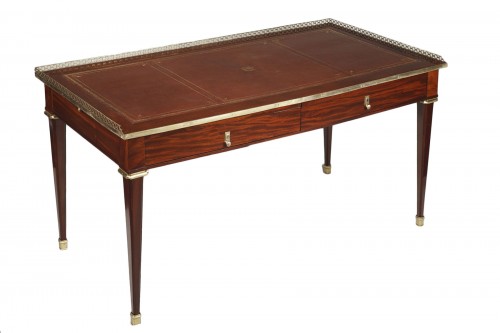 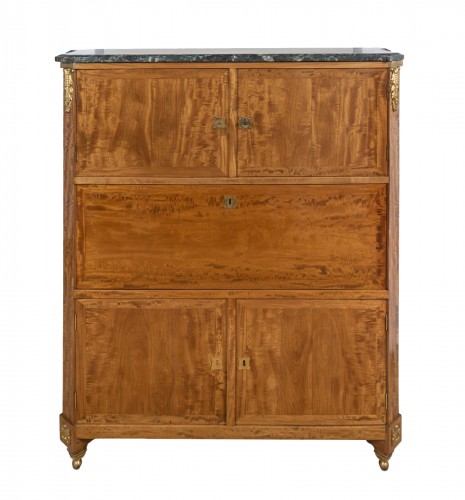 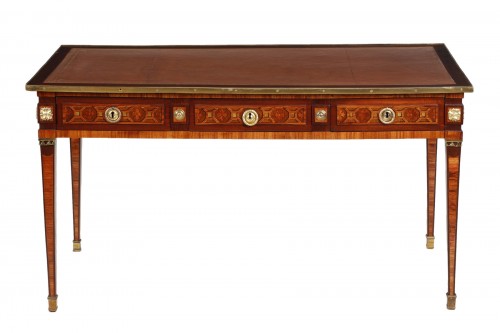 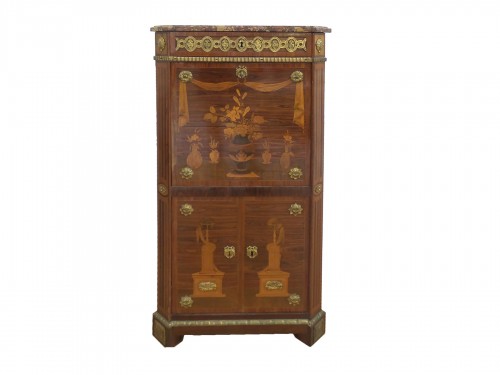