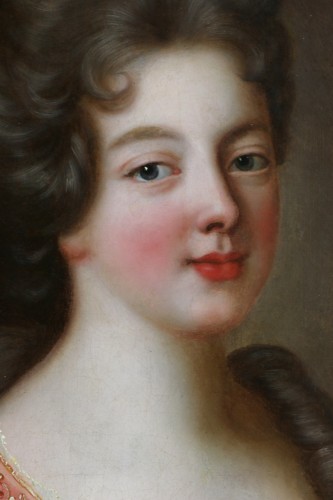 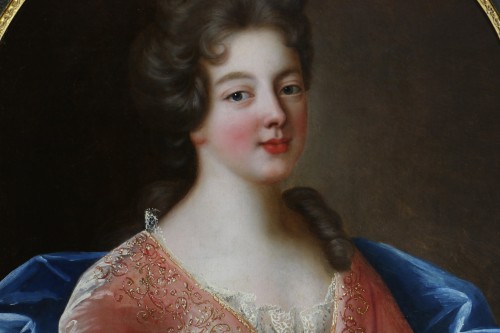 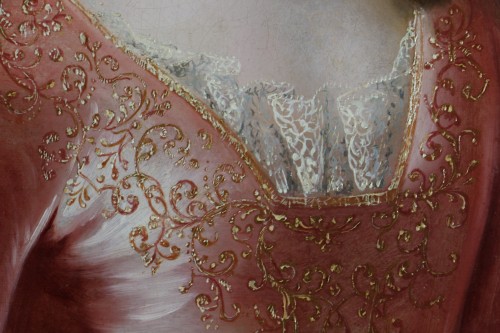 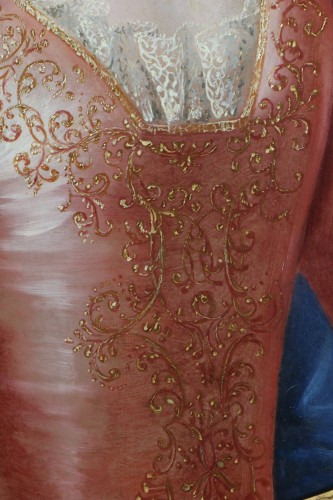 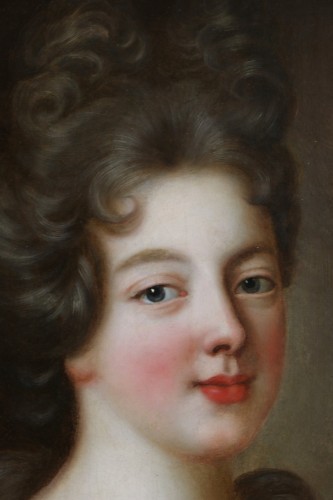 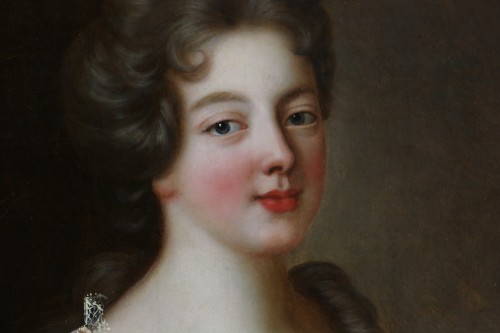 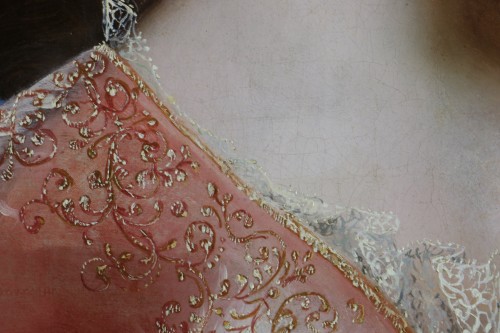 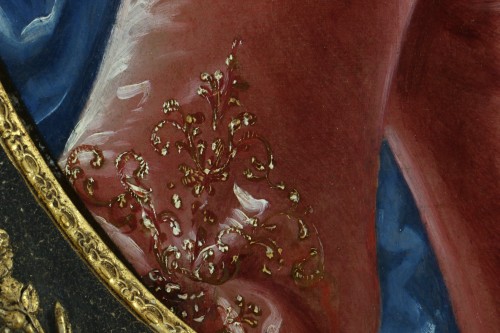 This superb painting is the portrait of a young lady of quality dressed in a richly embroidered silk and lace dress of gold thread. Note the superb work of the artist, especially on the face, but also the lace and the embroidery. A sumptuous setting comes to magnify the whole

"François de Troy was born in Toulouse in the year 1645. Jean de Troy7, his father, was painter of the Town Hall and gave him the first lessons of his art. He had received from nature the talents which make a great painter. He made the trip to Paris in his early youth. He studied first under Nicolas Loir and some time later (in 16628) under the famous portrait painter Claude Lefevre. This, together with his lack of fortune and brilliant successes, determined him for this genre in which he soon excelled. His genius was vast, fruitful, and such as a history painter needs. Some works that we see of him are proof of this. It was as a history painter that he was received into the Royal Academy in 1694, where he subsequently held all the positions. His reception piece depicts Mercury putting Argus9 to sleep. Dandre Bardon reports that it was said of François de Troy that he brought together in him the talents of several famous painters, that he painted eyes like the Guide, noses like Van Dyck and mouths like Correggio. A worthy pupil of Lefèvre, his works, full of intelligence and finesse, charmed by their coloring. He deserved and received the highest praise for portraits of women. Without altering its features, he had the art of adding grace and nobility to it. Chosen by Louis XIV to paint the portrait of the Dauphine, he left for Bavaria and showed how much he deserved the preference with which the king had honored him. His reputation was then at its height. The greats of the court wanted to occupy his brush. He died in 1730, aged 85. He had married in 1669. He left a son worthy heir to his talents. We see many portraits made by François de Troy. They are well documented. His, which is in the gallery of the Duke of Florence, leaves nothing to be desired for the truth, for the effect of the complexions, the fabrics, the accessories and for all together. The curious esteem and seek out his drawings, which for the beautiful finish do not yield even to those of Van Dyck. (Folio 507-510) “In the 1670s, he befriended Roger de Piles who introduced him to Dutch and Flemish painting. The success as a portraitist of Claude Lefevre pushes him to become a portraitist himself. He was sent to Paris at the age of 17. He was approved by the Royal Academy of Painting and Sculpture during the session of April 4, 1671, which commissioned two paintings from him representing Messieurs de Metz and Pérot. He was received as a history painter on October 6, 1674 at the Royal Academy of Painting and Sculpture, with a reception piece entitled Mercury cutting off the head of Argus. In 1692, he was assistant professor of the Academy, of the class of professors, in 1697. In November 1696, he was banned for a month from the Academy following a dispute over the drawing of a eye. On November 28, 1699, he presented the portrait of Jules Hardouin Mansart to the Academy. In January 1705, he passed from the class of professors to the class of adviser-professors of the Academy. On July 7, 1708, he was appointed director of the Academy and remained so until July 4, 1711. The Academy then decided to place him in the class of former directors that it created to honor him. In 1679, he was commissioned to paint the portrait of the Swedish ambassador and, in 1680, that of Anne Marie De Bavaria shortly after her marriage to Louis of France. Among his clients were Madame de Montespan, her son Louis auguste de Bourbon and his wife. Thanks to these orders, François de Troy was able to work without interruption after the court nobility for nearly fifty years. He was admired for his ability to portray nobility and his concern for good manners and fashion. Perhaps more importantly, his painting was said to have the ability to make any woman beautiful. In the 1690s, François de Troy became the main court painter of King Jacques II in exile in Saint Germain en Laye, where he was the master of the painter Alexis Simon Belle. Between 1698 and 1701, a period of peace between France and Britain, the Jacobites (supporters of James II) could cross the Channel with portraits of James Francis Edward Stuart and his sister Princess Louise Marie Thérèse Stuart. François de Troy was then the only painter of the court of Jacques II and needed the help of Belle, his best pupil, to create the many portraits that had been commissioned from him.