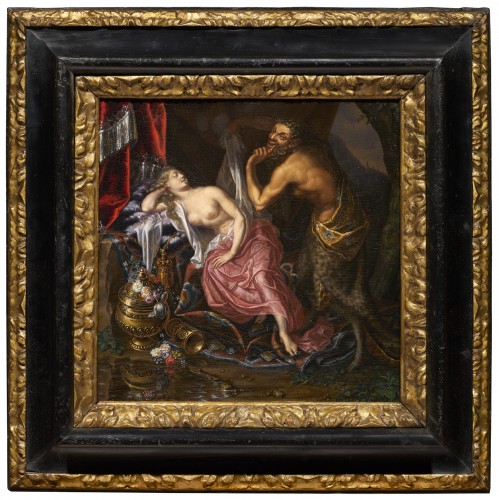 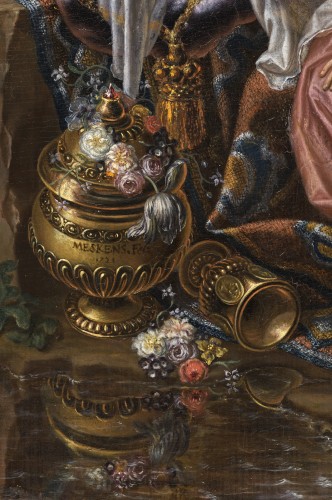 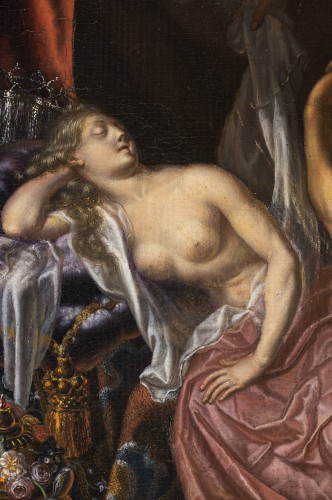 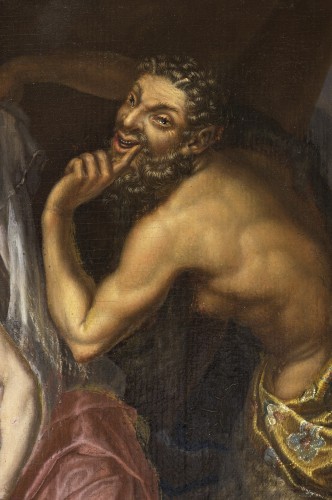 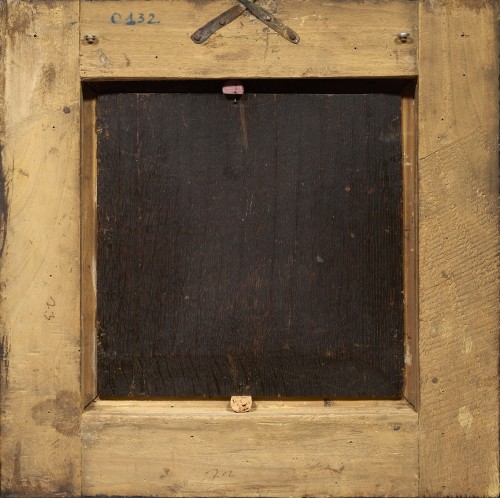 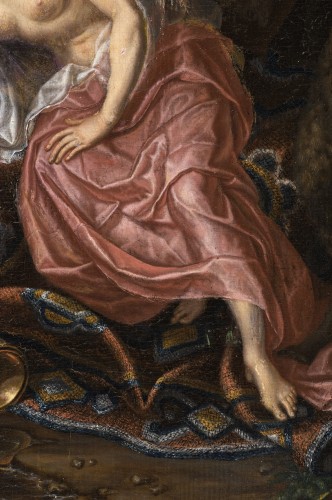 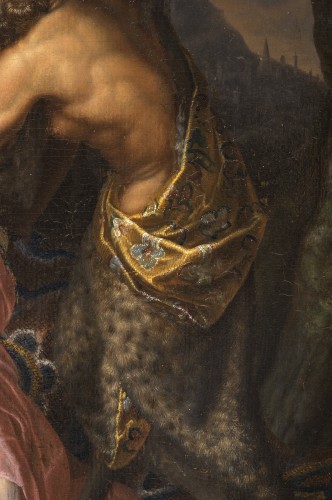 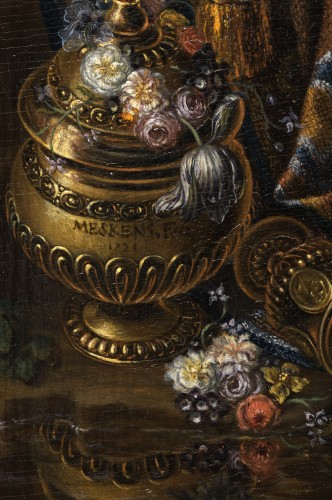 This painting, by Johann Franz Meskens, represents a satyr discovering a sleeping naiad. Behind the mythological alibi, it is easy to see an allegory of male desire, but above all the opportunity to represent a partially naked female body, in deep slumber. The decorative richness of this panel and the rendering of the fabrics, testify to great Baroque taste still persistent in the first third of 18th century, in both Antwerp and the princely courts of Germany. The presence of the painter's otherwise little known signature, clearly identifies him and has allowed us to begin reconstructing his corpus, thanks to the identification of another of his works that is also proposed for sale.

Johann Franz Meskens, sometimes also called Frans Meskens, is a Flemish painter for whom we have very little biographical information. He is mentioned as a master belonging to the Guild of Saint Luke in Antwerp between September 18, 1725 and September 18, 1728. In 1731 he entered the service of Cardinal Damian Hugo Philipp, Count of Schönborn as a court painter and agent for his artistic purchases in Antwerp.

Damian Hugo Philipp de Schönborn (1676 - 1743) was appointed Cardinal in 1713 and Prince-Bishop of Speyer, one of the smallest principalities of the Holy Roman Empire, in 1719. From 1722 onwards, he resided in Bruchsal (a small town in the present-day district of Karlsruhe in Baden-Württemberg), where he had an imposing baroque mansion built by Balthazar Neumann (1687 - 1753).

It seems clear that Meskens’ art was directly influenced by his elder Herman van der Mijn (Amsterdam 1684 - London 1741), himself a pupil of Willem van Mieris (Leiden 1662 - 1747), through whom he is connected to the school of the Leidse Fijnschilders, the "minutious painters" of the Leiden school.

Herman van der Mijn became a master at the Guild of St. Luke in Antwerp in 1712, about ten years before Meskens. In 1713 he moved to Düsseldorf as a court painter for Elector Wilhelm, where he remained until 1716. While he had started as a flower painter, he began to paint historical subjects during his stay in Düsseldorf. His career illustrates the attraction of the German princely courts for Dutch painters at the beginning of the 18th century and constitutes another common point with that of Johann Franz Meskens.

The theme of the Satyr surprising a sleeping nymph has been a recurrent theme in Italian art since the late Renaissance. In his series of thirteen engravings called The Lascivious, probably published around 1590-1595, Agostino Carracci deals with this theme twice. Thereafter it will be widely represented.

Here, Meskens gives us a very personal interpretation of this theme. A bearded faun represented in profile unveils a sleeping naiad in a cave. He is draped in a fur stole, lined with brocade, wrapped around his waist revealing the strong muscles of his back and shoulders. His right arm delicately lifts the transparent sheet that covered the nymph while his left index finger points to his eye, as if winking at us.

His coppery skin contrasts with the whiteness of the naiad. Leaning on a silky cushion adorned with an enormous pompom of trimmings, she seems to be asleep on a luxurious oriental carpet whose sinuous folds catch the light. This improvised layer is surmounted by silky curtains fringed with silver. A bronze urn, on the lid of which rests an armful of flowers, and a cup of the same metal, decorated with emperors’ profiles, constitute the only furnishing of this bedroom. This urn is reflected in a body of water at the foot of the naiad (water being one of her attributes), further reinforcing the dreamlike character of the scene.

The chromatic richness of this panel should be emphasized: the pinkish-red diagonal running from the curtains to the nymph's dress is framed by the coppery masses of the faun's torso and the bronze vases. They stand out on one side against a pinkish sky evoking the first glimmerings of dawn and on the other against the greyish transparency of the reflections in the water.

The muscular back of the satyr seems to be a direct reference to the engravings representing (on an inverted basis) the Belvedere Torso. Numerous examples of this engraving exist since the Renaissance, and we know the importance of engravings in the diffusion of decorative motifs in the workshops.

A collection card by Cornelis Hofstede de Groote, dated 1926, mentions another panel by Meskens, signed and dated 1720, measuring 31x25 cm and depicting Cleopatra killing herself. Unfortunately, we have not found a reproduction of this work. It is quite possible that this panel formed a pair with the Lucretia that we have recently discovered and which is of similar dimensions (31.5x26 cm), as these two subjects were often represented in pair.

The numerous similarities between our two paintings mean we can firmly attribute this Lucretia to Meskens, despite the fact that the signature was largely erased. Beyond the general composition of the painting (a female figure whose body occupies one of the diagonals, presented in a rich frame of drapery), the details of the feet and the draperies, the folds of the carpet, and the treatment of the flowers are all very similar.

Although our panel is almost square in format, it was probably originally rectangular. It may have been reduced in height as it is tapered at the back on three sides only. We have chosen to frame it in a rich black and gold Italian frame, in perfect baroque taste, which highlights its decorative exuberance. 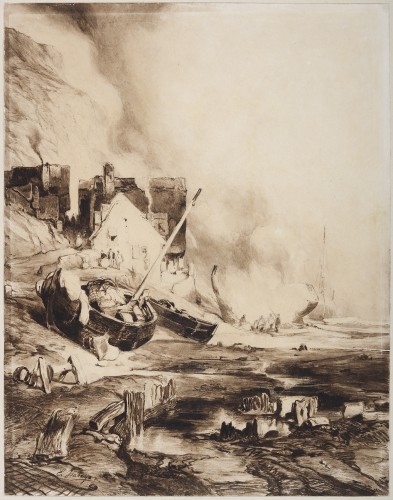 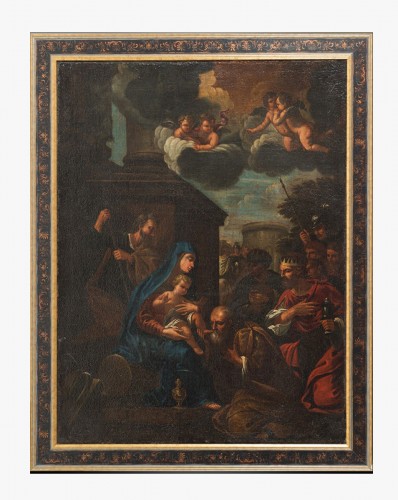