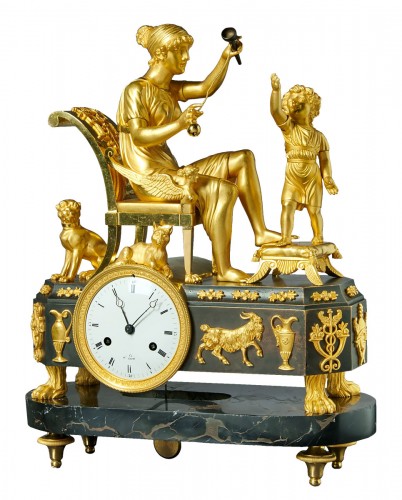 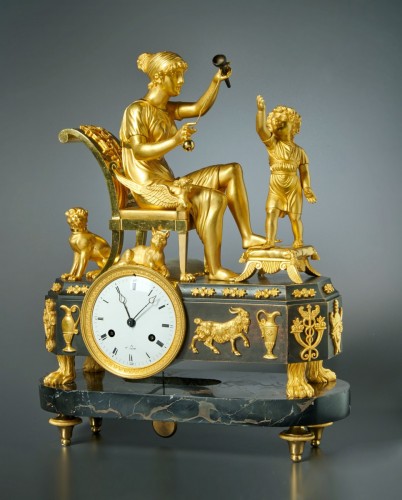 A very fine Empire gilt and patinated bronze and marble mantel clock of eight day duration. The white enamel dial signed à Paris with Roman and Arabic numerals and blued steel moon-style hands for the hours and minutes. The movement with silk thread suspension, anchor escapement, striking on the hour and half hour on a single bell, with outside count wheel. The case showing a young mother playing with her young son. Dressed in a short classical tunic, she sits in an Egyptian style Empire fauteuil with a scroll back, winged sphinx-shaped arms, sabre back legs and straight front legs with lion paw feet. She plays with a game of ball and cup which her son, also dressed in a classical tunic, tries to reach up to while standing on a cushioned footstool (tabouret de pied) with scrolled acanthus apron and feet. Below the fauteuil is a dog seated beside a cat who lies directly above the dial, which is asymmetrically set within an octagonal-shaped rectangular plinth, mounted at the front by two classical pitchers and a ram and on the angles with a caduceus issuing from conjoined cornucopias and at the ends with the head of Mercury wearing a winged hat or petasus. The plinth on hairy lion paw feet on a rectangular marble base with rounded ends on toupie feet

Both this clock and the very similar example illustrated in Elke Niehüser’s book on French bronze clocks show a mother playing a game with her young son. In the latter she holds a yoyo while here she tries to catch a ball in a cup. Both were popular early nineteenth century games which continue to delight today. Such clock cases belong to a group depicting domestic intimacy. To add emphasis to the theme of domesticity, a pet dog and cat are also included within the scene. The dog is a symbol of fidelity or faithfulness while the cat may also allude to the interest in the revived Egyptian style, which is clearly apparent here in the form of the sphinx-shaped arms of the chair on which the mother sits. The furniture adds to the clock’s appeal for both the chair and footstool, on which the boy stands, reflect the vogue during the Empire period for the Egyptian revival as well as Greco Roman artefacts. With its scrolled back, front lion paw feet and sphinx arm rests, the chair can be compared to a number of furnishings made by the leading Parisian Empire ébénistes. Among them is a set of eight giltwood fauteuils with winged sphinx arms attributed to Jacob Frères, made for the Palais du Directoire and now at Château de Fontainebleau (illustrated in Jean-Pierre Samoyault, “Mobilier Français Consulat et Empire”, 2009, p. 50, pl. 60). Equally relevant is a pair of carved fauteuils with sphinx arms made for Madame Récamier attributed to Jacob Frères (Musée du Louvre, Paris; illustrated in Marie-Noelle de Grandry, “Le Mobilier Français, Directoire Consulat Empire”, 1996, p. 51) as well as a set of eight fauteuils with winged lion head arm supports on lion paw feet, circa 1802 made for the grand salon for Lucien Bonaparte’s Paris hôtel at rue Saint-Dominique (illustrated Samoyault, op. cit., p. 56, pl. 74). The chair also compares with designs by the architect and ornamentaliste Charles Percier (1764-1838) for various fauteuils by Georges Jacob, of which Percier’s pen and ink drawing for the five chairs include sphinx arm supports, sabre shaped legs and lion paw feet (illustrated in Denise Ledoux-Lebard, “Le Mobilier Français du XIXe Siècle”, 2000, p. 283). Likewise, the footstool can be compared to known Empire pieces such as two by the ébéniste Pierre Marcion for the Palais de Compiègne (both illustrated in Samoyault, op. cit., p. 180, pls. 310-311).

Like the fauteuil and tabouret de pied, the mounts on the dial plinth reflect aspects of the Empire style, namely the interest in ancient Greece and Rome. To this end, it includes the head of Mercury, the mythological messenger of the gods. The caduceus on the angles was one of his attributes as was the ram, in his role as a protector of shepherds and sheep.