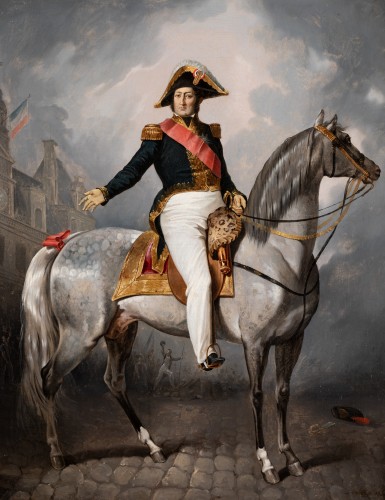 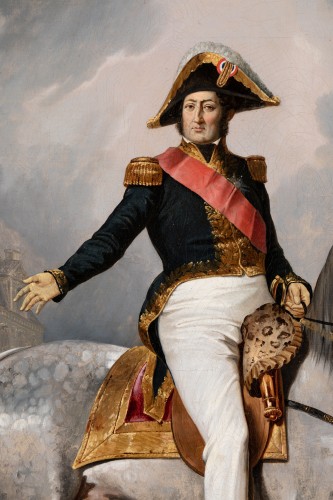 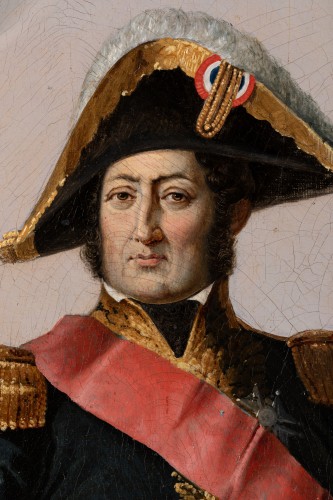 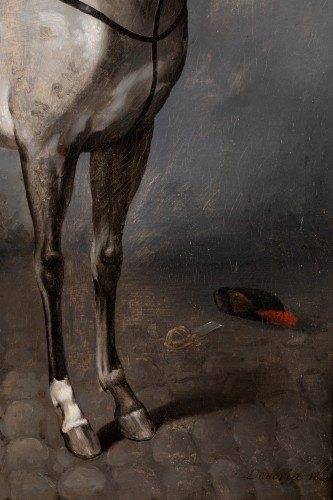 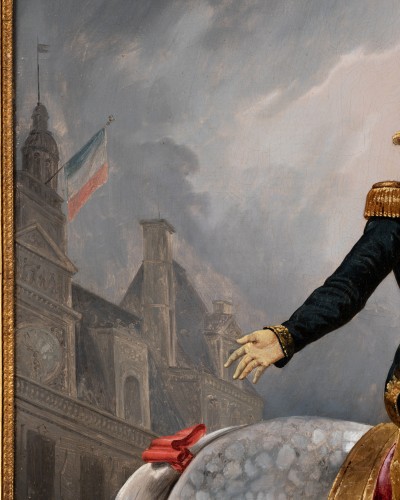 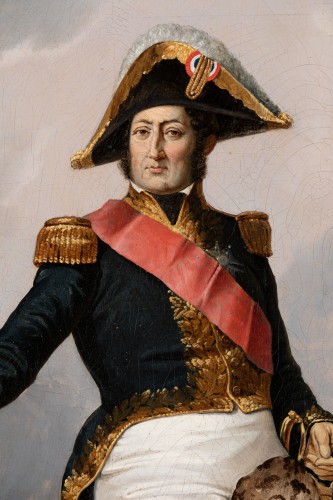 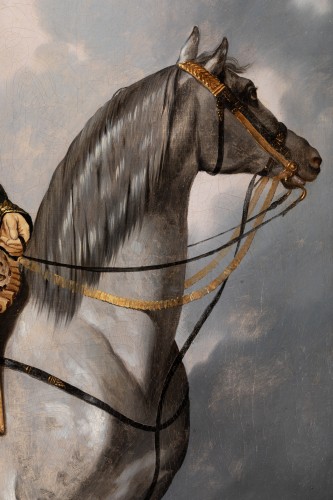 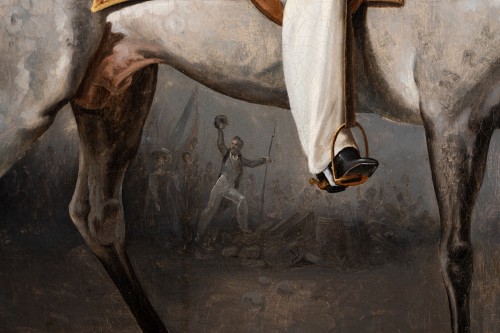 Very nice oil on canvas representing Louis-Philippe of Orléans (1773-1850) arriving at the city hall after the riots of the Three Glorious. The Duke is represented in a National Guard uniform, mounted on a beautiful iridescent horse. In the background, one can see the cobblestone barricades with men armed with bayonets, and accompanied by their wives. On the ground, one can see the broken blades and headdresses of the guard that has just been defeated during this three-day revolution. On the side, the city hall of Paris, taken by the rioters, is easily recognizable with its lantern displaying the tricolor flag.

The work we present is a historical document representing an important page of French history. Indeed, this scene of July 31st, 1830 marks the fall of the absolute monarchy. After a long period of unrest, King Charles X attempted a constitutional coup that led to an uprising of Parisians. The latter set up barricades in the streets, confronted the royal forces and took the town hall. The revolutionary scene in the background symbolizes the triumphant Republic in a composition close to Delacroix's famous "Liberty Leading the People". As in the master's work, we can see men, but also women, leading the fight, which is new. King Charles X has no choice but to abdicate, while the deputies, with the complicity of Lafayette, tame the insurrection by proclaiming Louis-Philippe d'Orléans lieutenant general of the kingdom.
Devéria shows the triumphant arrival of the Duke of Orleans, the barricades, the old city hall, now gone, and the French flag flying for the first time on a monument. In addition to the historical aspect, he shows us the extent of his talents, as a colorist with a beautiful horse with iridescent reflections, but also as a portraitist with a faithful and very precise representation of the future Louis-Philippe.
*Eugène Devéria, a student of Anne-Louis Girodet, was especially influenced by his own brother Achille Devéria (1800-1857), also a student of Girodet and lithographer. He exhibited at the Salon from 1824, at the age of nineteen. Originally from Pau, the birthplace of King Henri IV, he presented at the 1827 Salon The Birth of Henri IV, a tumultuous work with rich colors that immediately placed him in the camp of the Romantics and gave him his moment of glory. But his next works were less brilliant : Eugène Devéria obtained commissions - the ceiling of the Campana gallery in the Louvre with Puget presenting the Milon of Crotone to Louis XIV (1832) and battle scenes for the historical museum of Versailles (1838) - but his style quickly faded. The critics, disappointed, became hostile to him : in 1838 the artist fled Paris to carry out a commission for the decoration of the cathedral of Notre-Dame des Doms in Avignon, abandoned three years later due to illness. Back in his native town of Pau, he went through a spiritual crisis and converted to Protestantism, living in austerity. His last compositions, notably views of the Pyrenees and genre or historical scenes (The Death of Jane Seymour, 1847 ; The Reception of Christopher Columbus, 1861), are also particularly austere, and Devéria shows himself to be better at portraits, such as that of Marie Devéria as an Amazon (1856). Eugène Devéria has benefited in recent years from a reconsideration on the part of art history, marked in particular by the exhibition devoted to him by the Musée des Beaux-Arts de Pau in 2006. 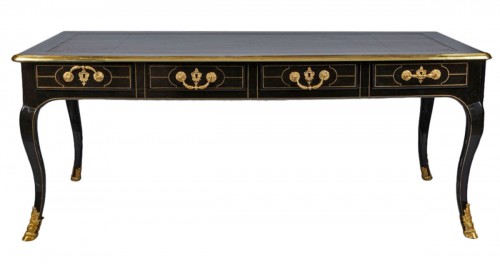 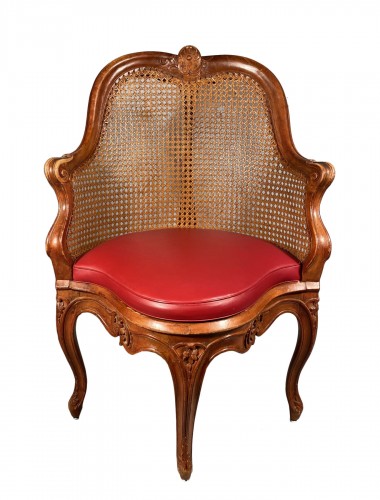 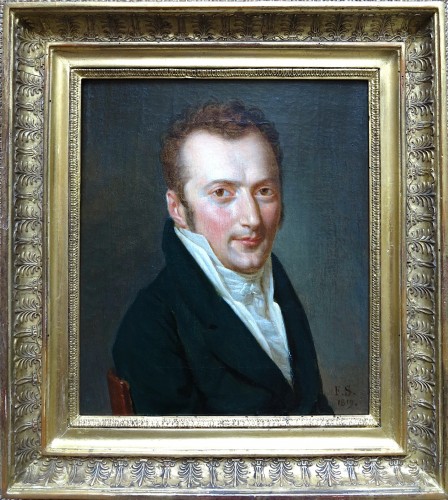 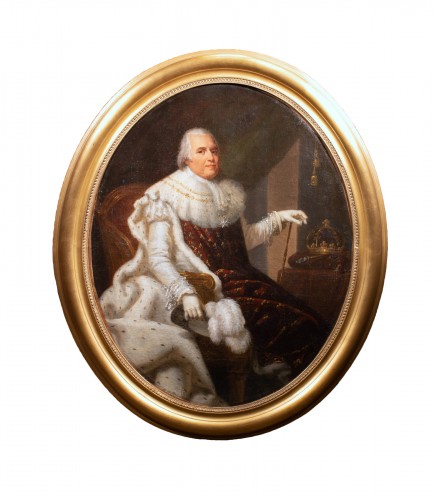 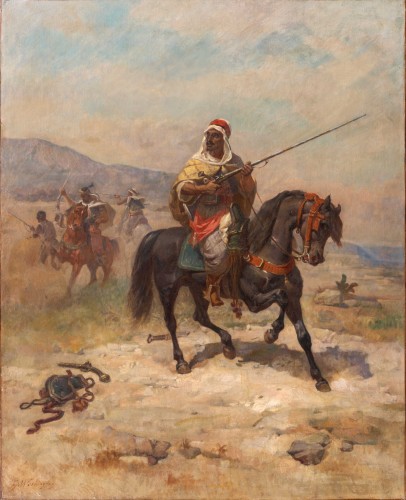