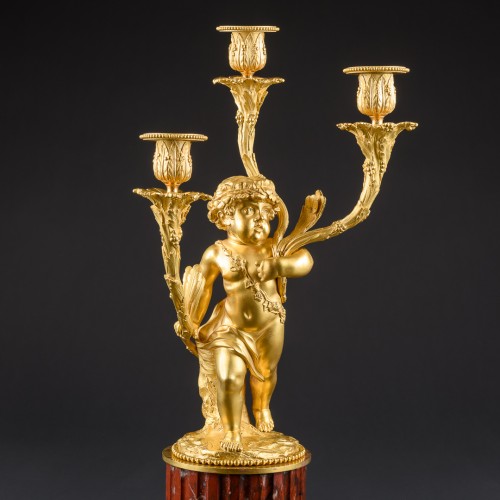 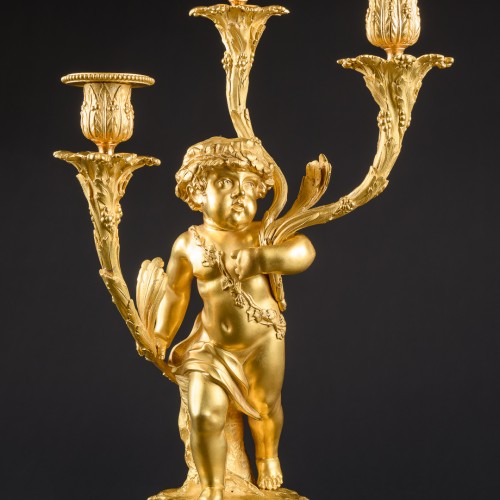 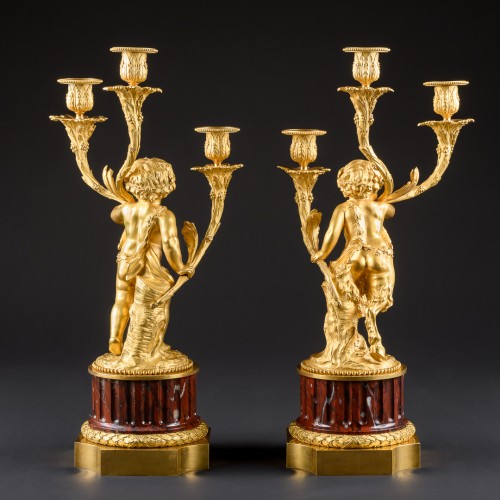 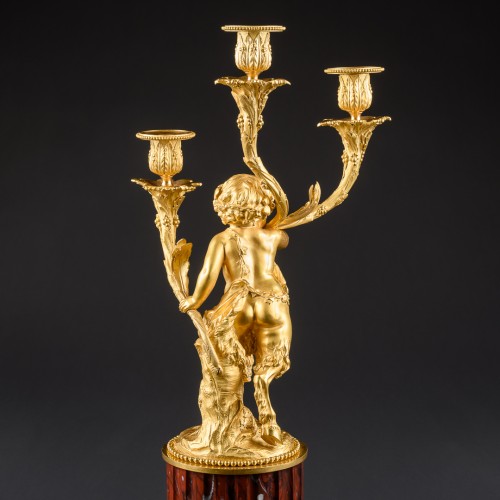 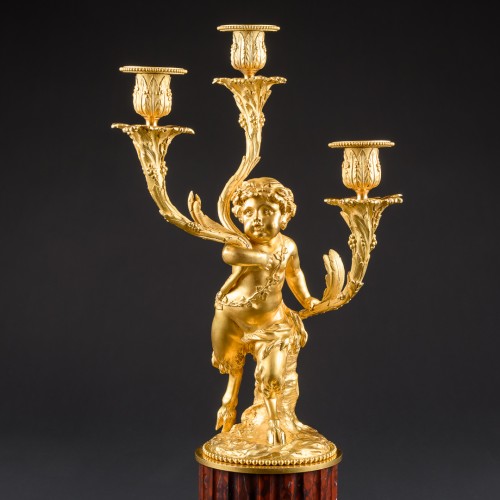 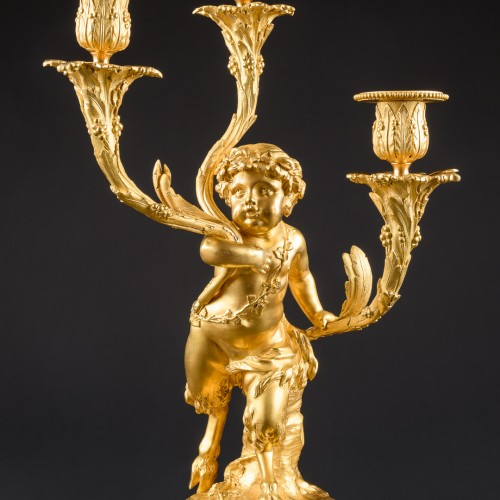 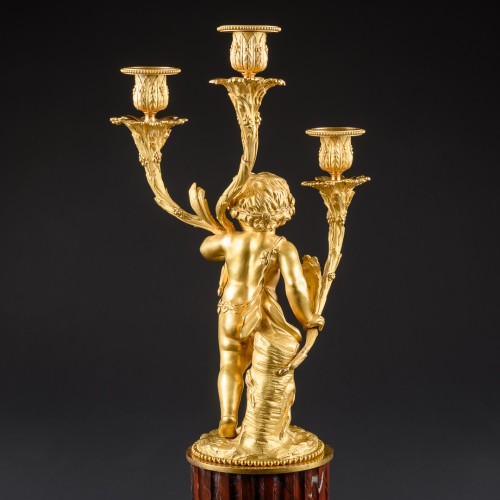 Large pair of superbly carved gilt bronze three-light Louis XVI style candelabra, resting on a cylindrical fluted base in red marble, after a model by Clodion. They represent the allegory of Vice ad Virtue. The candelabra, set on marble and gilt-bronze bases surrounded by a row of beads and a wreath, consist of two gilt bronze statuettes. One modeled as a young bacchante, the other as a youthful satyr, each supporting a pair of vine branches, both leaning against a tree stump. Each of the figures bears three candle-arms, formed of branches enhanced with berried leaves, ending in nozzles and drip-pans decorated with laurel leaves. Both statuettes are raised on a fluted column with leaf-cast wreath and gilt bronze base.

The original drawings and sculptures were created by Clodion (1738-1814) for the satyr and Louis Félix de la Rue (1730-1777) for the bacchante, possibly as early as the 1770s. It was a very successful and popular model which continued to be produced into the 19th century. One pair is in the Musée du Louvre.


This pair of Louis XVI style candelabra after a model by Clodion dates from the middle of the 19th century and is in a perfect state of conservation with magnificent gilded bronzes.

Claude-Michel Clodion (1738-1814)
Claude Michel, whose mother was from the Adam dynasty of sculptors, spent the beginning of his life and his training in Nancy then in Lille. In 1755, he entered the studio of his maternal uncle, the sculptor Lambert Sigisbert Adam, in Paris. He stayed there for four years, then became a pupil of Jean-Baptiste Pigalle on the death of his uncle. Later, in 1759 he received the grand prize for sculpture and then left for Rome in 1762 where he resided until 1771, carrying out orders from Duke Louis Alexandre de La Rochefoucauld or Catherine II who sought to attract him to Russia.

In 1773, he was approved by the Academy and received his first commission from the King in 1779 for a statue of Montesquieu. He married in 1781 with Catherine Flore Pajou (1764-1841), daughter of the sculptor Augustin Pajou and Angélique Roumier, and sister of Jacques-Augustin-Catherine Pajou. Because of the Revolution, he retired to Lorraine where he modeled several vases and statuettes for the Faiencerie de Niderviller. 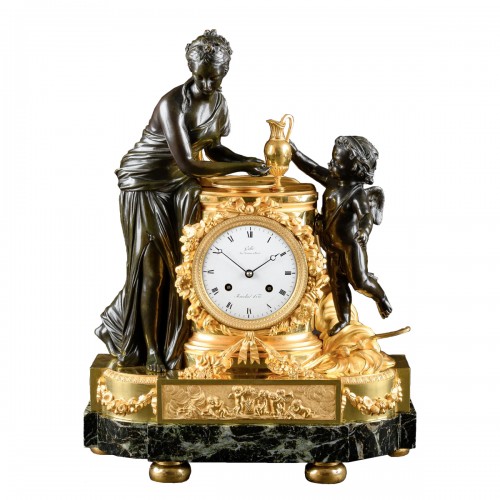 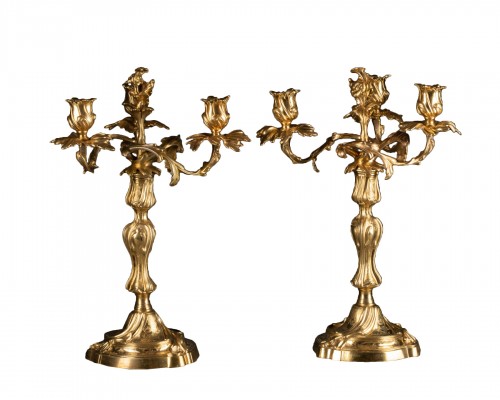 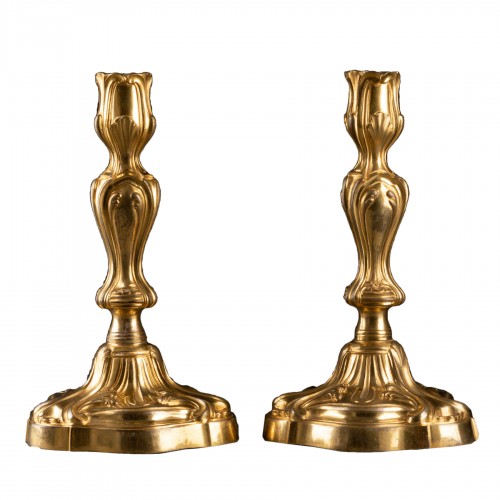 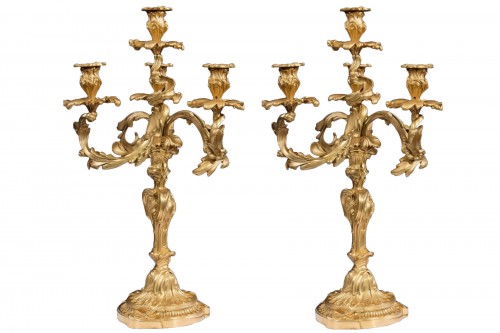 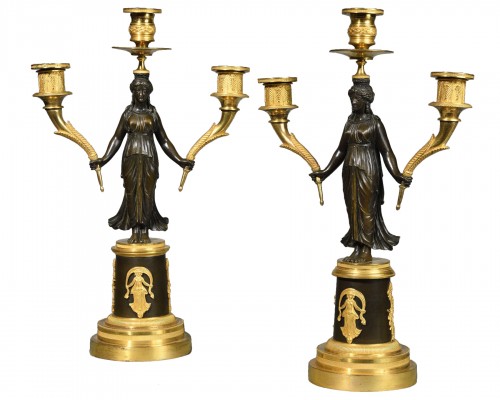