The Summer - Flemish school, first half of the 17th century 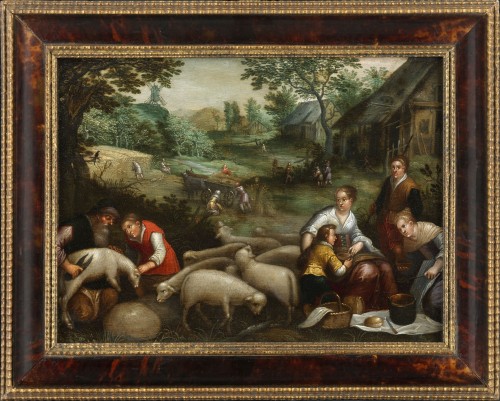 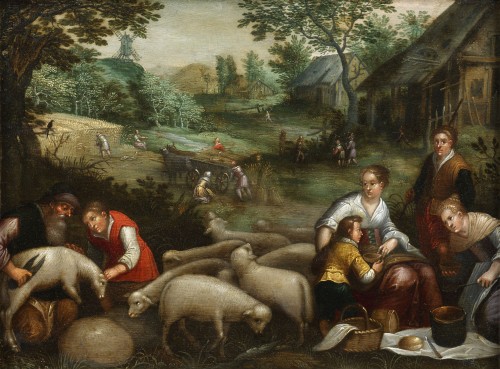 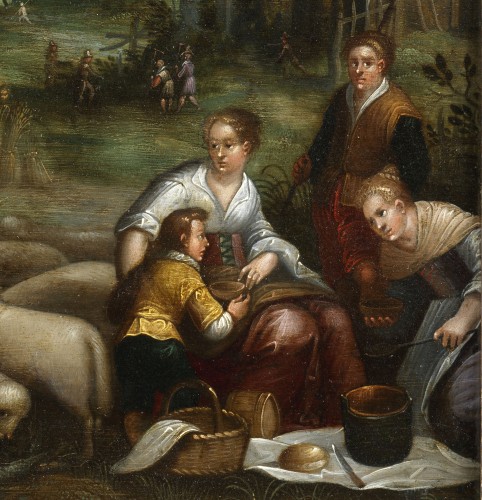 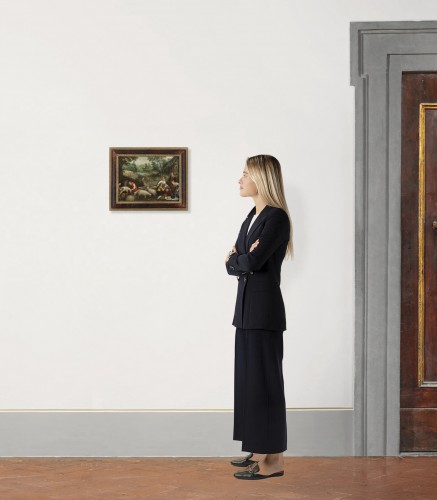 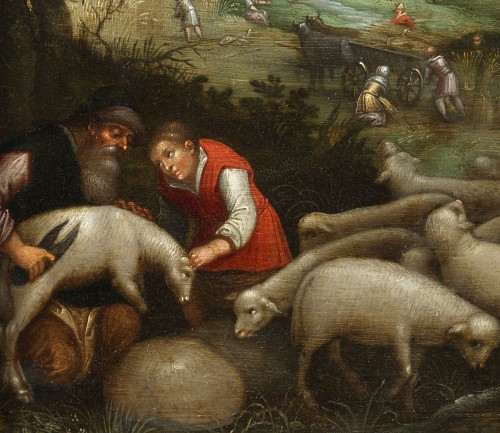 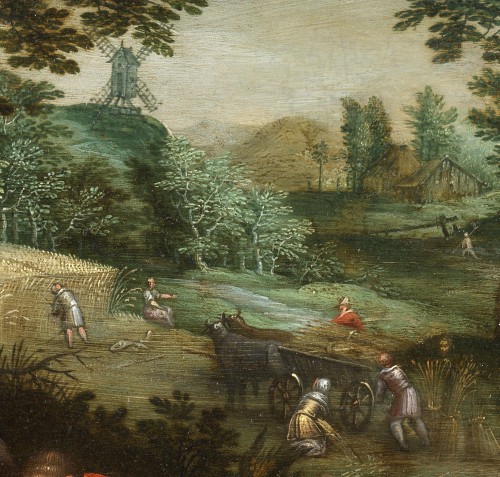 Oil on copper parquet. Flemish school of the early 17th century.
Our composition is a seasonal allegory of summer featuring peasants bustling in a charming country landscape. In the foreground, at the edge of a wood, an old man, assisted by a young girl, is shearing a sheep, whose woolen threads the artist represents passing through the blades of a chisel. While other sheep anxiously await their turn, a small group of people prepare the meal for a well-deserved break. Behind them, the farmers are harvesting the wheat, each ear of which is marked with a thin golden line. While some are mowing, others are assembling them into bunches and loading them onto a cart pulled by two oxen. The harvest will undoubtedly be brought later to this mill that we see in the background of the composition. On the right, near the village, richly dressed patricians go hunting. This is the division of labor in the summer countryside, where the green vegetation gives depth to this skillfully executed pastoral scene.
This painting is a Flemish interpretation of the cycle of the seasons painted by the Venetian Jacopo Bassano in the 16th century. His love of the landscape reflects his long residence in the small village of Bassano del Grappa in the northern Veneto region, where the surrounding countryside served as his inspiration. Rooted locally, Jacopo was nevertheless a humanist artist inspired by the greatest artists he had admired during his apprenticeship in Venice. From then on, he made a synthesis by adapting the achievements of the Renaissance to the themes of rural life. If Bassano disseminated sacred subjects in his Seasons, our artist delivers here a work halfway between the landscape and the genre scene, suitable to delight the taste of collectors of cabinet painting. Far from being a simple copyist, our painter is a virtuoso of the Antwerp landscape tradition who has nothing to envy to the talent of Italian artists. Devoid of moral or religious content, this composition offers fine luminous details that convey an impression of summer warmth that one imagines would have brightened the eyes of a connoisseur during the long winter months.

We have chosen to present this precious painting in a delicate gilded wood and tortoise shell veneer frame.
Dimensions : 20,4 x 28 cm - 29,3 x 36,8 cm with the frame

Biography : Jacopo Bassano (Bassano del Grappa c. 1510 - id. Feb. 13, 1512) began his apprenticeship in the Venetian workshop of Bonifacio de Pitati in the 1530's. Working mainly on church decorations, he was inspired in particular by the mannerism of Pordenone. Influenced by the engravings of Titian and Raimondi, he also knew how to work from nature. From the 1560s onwards, he freed himself from Mannerism by refocusing on the treatment of light contrasts. His sacred paintings treated in a pastoral vein were so successful that he founded a workshop with his son Francesco. In the 1575s, he depicted biblical scenes in small landscapes where genre scenes were held in parallel, such as the Summer which inspired our painter. As a sign of the esteem in which he was held by his peers, Veronese depicts him, along with Titian and Tintoretto, playing music in The Marriage of Cana, now in the Louvre. 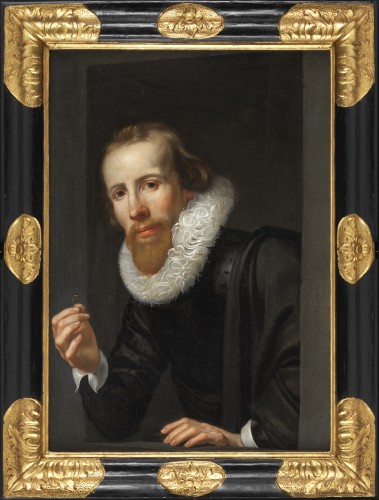