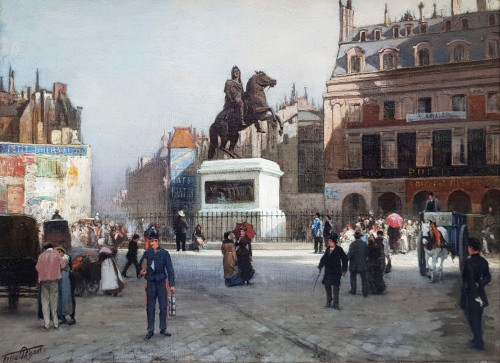 Felix Possart was born in 1837 in Berlin, Germany. After studying at the Academy of Fine Arts in Berlin under Hans Fredrik Gude and Franz Skarbina, he traveled to Spain in 1882, whose buildings and beauties he reproduced in numerous paintings. He studied Moorish life and costumes in Morocco in 1891, painted a Last Supper of Christ (1894) and an Entry of Christ into Jerusalem (1896), inspired by authentic oriental life, and stayed in Palestine in 1899. He often spent summers on Lake Como, where he depicted the boats and the life of the fishermen.

Our painting is an exceptional document of life in Paris in the last years of the 19th century, at the beginning of the "Belle Epoque". The famous "Place des Victoires" is precisely represented with its buildings and the statue of Louis XIV still in place today. This painting features a multitude of characters, merchants, passers-by, a horse-drawn carrier and a policeman. As if captured by an invisible photographer, the scene shows each person in a different attitude. Despite the large number of characters, an atmosphere of tranquility and happiness emanates from this painting. Felix Possart has created a brilliant composition here by using a breakthrough of the sun through the clouds. The contrasts of light and shadow on the buildings and figures give the painting a remarkable depth.

With this painting, we are typically in the case where the value of the work is much more about its subject matter and rarity than about the artist's average price. Felix Possart left us only a few paintings; several of them of good quality are preserved in various museums, but the vast majority of his works remaining on the market are not of great interest. "The Place des Victoires in Paris" is a small, isolated masterpiece, which the artist produced during one of his rare trips to Paris.