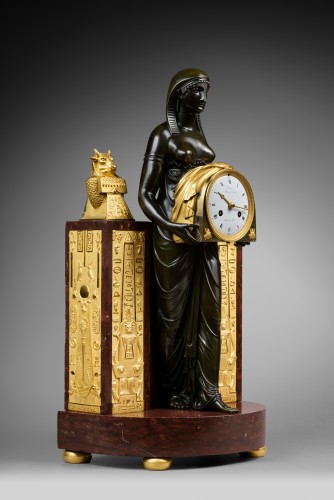 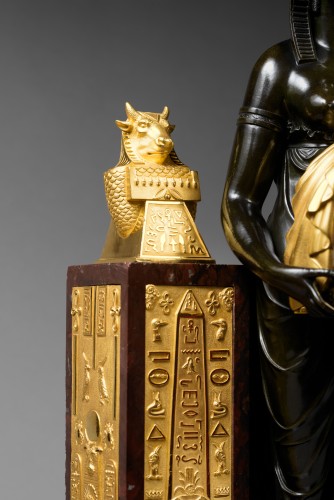 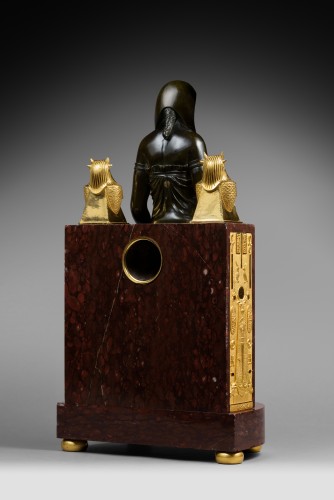 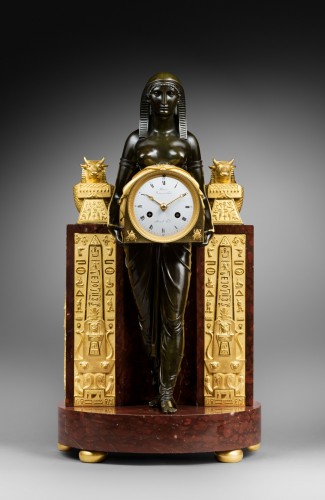 An extremely fine quality and important Empire gilt and patinated bronze and rouge griotte marble Pendule ‘à l’Égyptienne’ of eight day duration by Mesnil à Paris, housed in a magnificent case by André-Antoine Ravrio after a design by Thomas Hope, signed on the white enamel dial Ravrio Bronzier à Paris /Mesnil hger. The dial with Roman numerals and a fine pair of Breguet style gilt brass hands for the hours and minutes. The movement with anchor escapement, silk thread suspension, striking on the hour and half hour on a single bell, with outside count wheel. The case with the clock drum cast with drapery resembling an unveiled casket and mounted with a pair of scarab beetles below the dial, held in the hands of the goddess Isis wearing a Nemes headdress and long sheaf dress gathered below her bare breasts, standing with her left foot forward within a rouge griotte niche flanked by pilasters, mounted with gilt bronze panels cast with an obelisk, hieroglyphs and Egyptian motifs, each pilaster surmounted by a canopic bull head above a mount showing Egyptian symbols and hieroglyphs, the whole upon a rouge griotte demi-lune base on bun feet

Literature: Thomas Hope, “Household Furniture and Interior Decoration”, 1807, pl. VII, showing Hope’s drawing of the Aurora Room in his London home with a clock of the same design placed between two vases upon a side table on the right hand wall. And pl. XIII, no. 3, showing Hope’s more detailed design for this clock. Sylvie Chadenet “Les Styles Empire & Restauration”, 1976, p. 25, pl. 2, illustrating bedroom furniture and furnishings including a clock of similar design to the present work which were used and owned by Madame Maria Letizia, mother of Napoleon Bonaparte.
Hans Ottomeyer and Peter Pröschel, “Vergoldete Bronzen”, 1986, p. 336, pl. 5.3.2, illustrating the present clock.
Jean-Marcel Humbert, Michael Pantazzi et Christiane Ziegler, Egyptomania, L’Egypte dans l’art occidental, 1730-1930, catalogue of the exhibition held in 1994 and 1995 in Paris, Ottawa and Venice, 1994, p. 192-193, cat. no 102.
Jean-Dominique Augarde, “Les Ouvriers du Temps”, 1996, p. 358, pl. 265, illustrating a very similar clock with movement by Raguet-Lépine and case attributed to André-Antoine Ravrio, with Isis in a slightly different sheath dress and with urns surmounting the flanking pilasters which are cast with the same decorations as here.
Pierre Kjellberg, “Encyclopédie de la Pendule Française du Moyen Age au XXe Siècle”, 1997, p. 380, pl. A, illustrating a very similar clock but without the pilaster mounts and surmounting canopic bull heads, with dial signed Caillouet à Paris. And p. 381, pl. B, illustrating a far simpler clock with just the figure of Isis on a plain rectangular base.
Elke Niehüser, “Die Französische Bronzeuhr”, 1997, p. 229, pl. 646, illustrating the present clock.
David Watkin and Philip Hewat-Jaboor, “Thomas Hope, Regency Designer”, catalogue of the exhibition held at the Victoria and Albert Museum, London, 2008, p. 384-385, no. 71, illustrating and describing the version owned by Thomas Hope, now in the collection of Lord Faringdon, at Buscot Park in Oxfordshire.

This magnificent clock was based upon a design by the English designer Thomas Hope (1769-1831) which along with his other antiquities and furnishings at his home in Duchess Street, London, was illustrated in his publication “Household Furniture and Interior Decoration”, 1807, plate XIII. The latter is almost identical to this executed piece except that in Hope’s drawing Isis is crowned with a crescent moon and the mounts either side of her also slightly differ. Following an eight year grand tour of the Mediterranean countries, including Egypt, Turkey, Greece and Italy, Thomas Hope settled in England in about 1796 and was soon to become an influential patron of the arts, a leading arbiter taste of Regency England and a highly original furniture designer. His work in the Egyptian style has various sources including inspirations from his own travels as well as publications such as Dominique-Vivant Denon’s “Voyage dans la basse et la haute Egypte” of 1802. He was also a great admirer of the Italian eighteenth century artist Giambattista Piranesi, whose “Diverse Maniere d’adornare i cammini ed ogni altra parte degli edifizi desunte dall’architettura Egizia, Etrusca, e Greca” (Diverse Ways of ornamenting chimneypieces and all other parts of houses taken from Egyptian, Etruscan, and Grecian architecture), published 1769, included fireplaces with Egyptian figural jambs and also bulls, which may well have inspired his clock’s design. In his notes accompanying his illustrated plate, Hope noted that the clock and the side table on which it was placed, both stood in his room dedicated to Aurora, goddess of the dawn, dominated at one end by a sculpture of Aurora and Cephalus by John Flaxman (1755-1826) as illustrated in pl. VII of his ‘Household Furniture and Interior Decoration’. Hope’s clock, which was probably manufactured in Paris and representing Isis was therefore fitting since the Egyptian goddess, who married her brother Osiris and gave birth to Horus, was closely associated with the heavens and the sun and the moon.

Several versions of this magnificent clock model are known, of which the present example can be considered among one of the most important, especially as the dial specifically bears the name of the case maker André-Antoine Ravrio (1759-1814) along with that of Mesnil, whose combined names can be found on other equally sumptuous clocks. Among other versions of the present clock is one almost certainly owned by Madame Maria Letizia, mother of Napoleon Bonaparte. In addition to the example once owned by Hope, which was subsequently bought by Lord Faringdon for his Oxfordshire residence Buscot Park, there is another example at Brighton Pavilion in the ante room of the King’s apartments and yet another at Farnley Hall, Yorkshire, signed on the dial Weeks London (probably Thomas Weeks).

André-Antoine Ravrio, one of the greatest French bronziers of the pre and post Revolution period, was a highly successful, well-respected businessman and an exceptionally gifted artist. In addition to his bronze work he wrote and published two volumes of poetry and had three of his plays performed at the Vaudeville Theatre, Paris. He came from a very interesting and well-connected background that must have proved useful during his career. His maternal grandfather was the eminent ébéniste François Vandercruse whose son, (Ravrio’s uncle), was Roger Vandercruse, known as Lacroix. Furthermore, Ravrio’s mother was sister-in-law to the royal ébéniste, Jean-Henri Riesener. After attending a good school, Ravrio joined the Académie. He then trained as a fondeur under his father, André, whose family had been fondeurs since 1661. In 1774 the great bronzier, Pierre-Philippe Thomire personally recommended Ravrio to the comte d’Artois. Three years later he was received as a maître-fondeur and afterwards joined Jean Baptiste Disnematin-Dorat, a Parisian doreur-argenteur. In 1790 Ravrio married Disnematin-Dorat’s daughter; his father-in-law then sold him his warehouse stock, which Ravrio rapidly expanded. Like Claude Galle, Ravrio sold bronzes by others as well as his own and in turn supplied the leading ébénistes, notably Georges Jacob, his uncle, Riesener and Guillaume Beneman.

Although Ravrio enjoyed success during Louis XVI’s reign, he achieved far greater fame under Napoleon Bonaparte. He took part in the first Exposition de l’Industrie, Paris, 1803 and then won a silver medal there in 1806. The same year he supplied a number of bronze furnishings for the Empress Joséphine’s apartments in the Tuileries and in 1810 was appointed to bronzier to the Emperor. As such he supplied some of the finest Empire bronze pieces including fine sculptured clock cases, girandoles and candelabras to many of the Imperial residences at the Tuileries, Fontainebleau, Saint-Cloud, Versailles, Compiègne and Rambouillet. Ravrio also worked for the Quirinal in Rome, Monte-Cavallo, for Stupinigi near Turin, King Ludwig of Holland and many other notable figures.

In order to meet demand, Ravrio employed over a hundred craftsmen and with success came substantial rewards. He lived in great luxury in a large house full of fine art and furnishings as well as a large library of classical literature (which he often referred to when seeking artistic inspiration); he also had an extensive wardrobe (which included 72 cravats). A portrait of him by his cousin, Henri-François Riesener (1812; Musée du Louvre) shows a prosperous and well-educated man, seated with books, bronzes and an open sketchbook. Sadly, none of his three children survived, though he had an adopted son, Louis-Stanislas Lenoir-Ravrio (1784-1846) who became his partner in 1811 and continued the business after his death. It is presumed that he died from mercury poisoning especially since he bequeathed 3,000 francs to anyone who could protect craftsmen from the effects of mercury gilding. The prize was won three years later by the fondeur and chemist, Darcet. Ravrio’s bronzes are regarded as some of the most beautiful of their kind. Examples can be seen among the finest collections including the above mentioned palaces as well as the Stedelijk Museum Lakenhal, the Upper Belvedere Vienna, Musée Massena Nice and the Residenz, Munich.

His clock cases are among some of the finest made during the Empire period and like a number by Pierre-Philippe Thomire, they also house clock movements by the Parisian clockmaker Mesnil, counting among them one which was made for the Empress Joséphine for the Palais de l’Elysées. Other clocks with cases by Ravrio and movements by Mesnil include one the Stedelijk Museum at Leiden and at Stockholm Castle (illustrated in Ottomeyer and Pröschel, op. cit., p. 353). Despite the fine quality of his craftsmanship and close association with the finest fondeurs of his day, relatively little is known about Mesnil à Paris although Tardy notes that by 1806 the firm was based at Charnier des Innocents and then from 1812-15 at rue Neuve Saint-Marc. 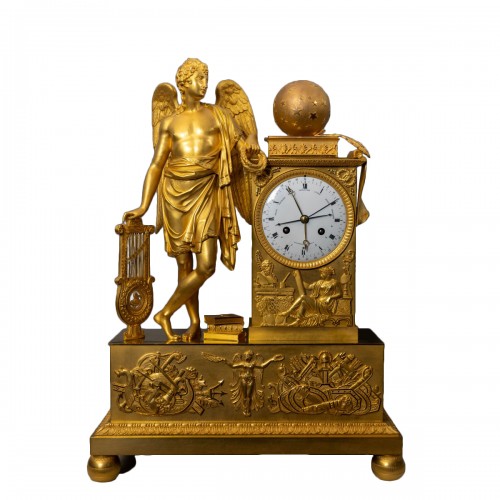 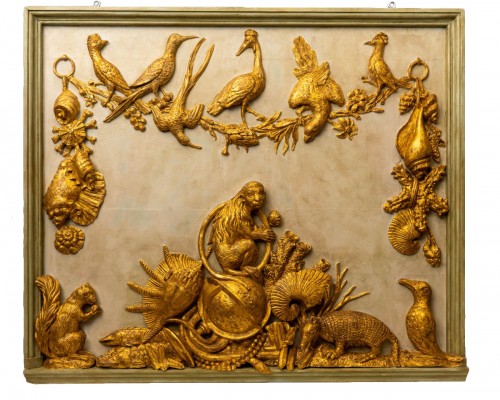 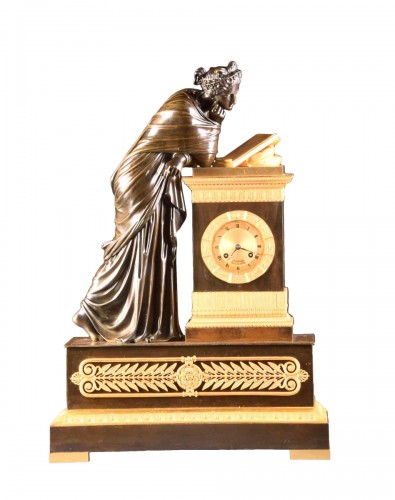 A monumental Empire clock with a constellation dial 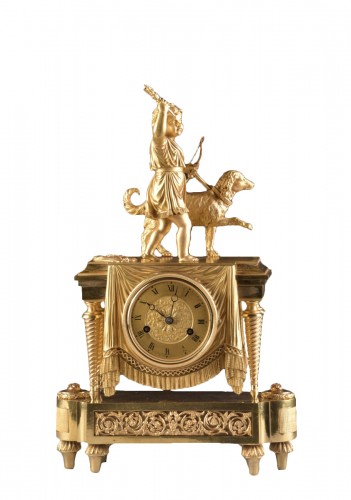 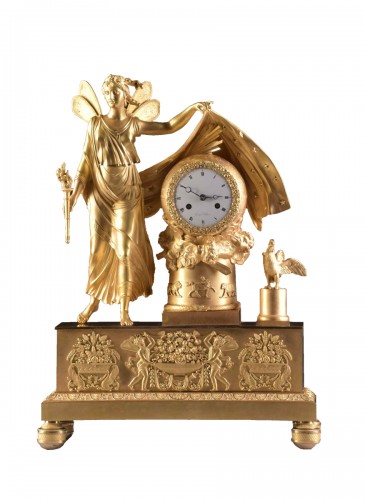 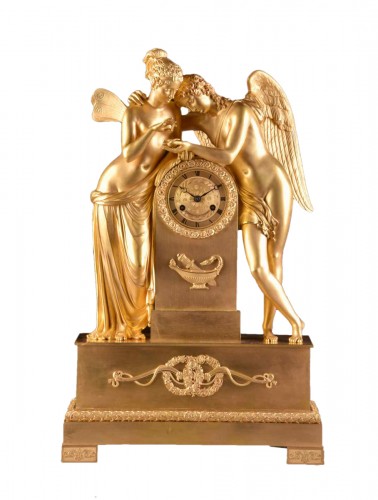