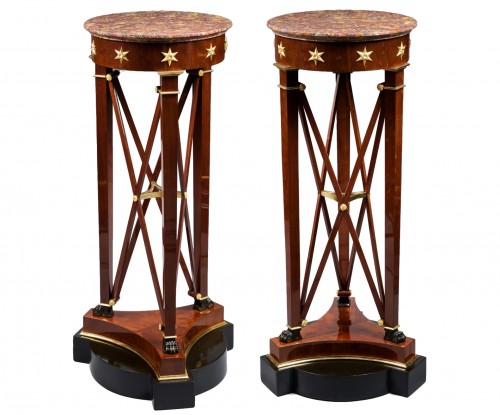 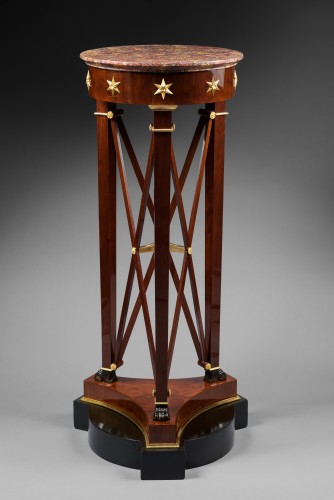 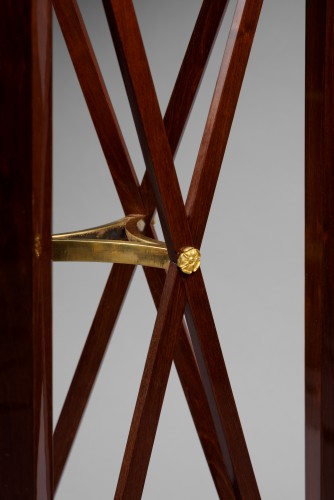 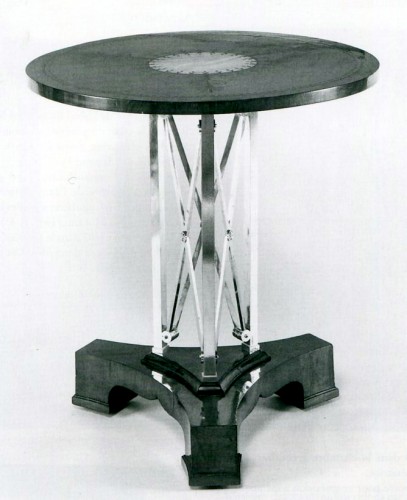 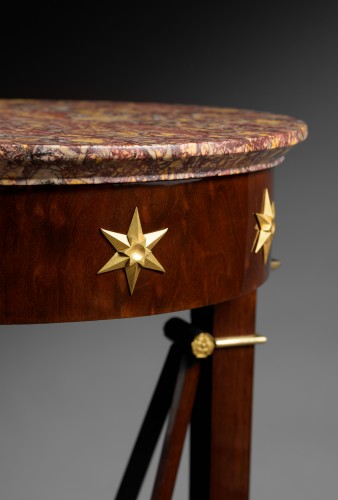 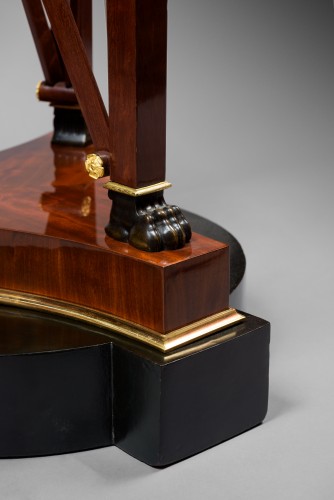 A rare pair of Empire brocatelle marble and gilt and patinated bronze mounted mahogany and green patinated wood pedestal sellettes à bande croisée attributed to Jacob-Desmalter et Cie after a design by Charles Percier, each with a circular moulded brocatelle marble top above a conformingly shaped frieze mounted with gilt bronze six-pointed stars, on three angular legs joined by x-shaped diagonal stretchers, decorated with gilt bronze rosettes at the junctions and at each end and centred by a horizontal tripartite gilt band, each of the three legs on carved lion paw feet on a tripartite base composed of an upper mahogany tier with concave sides and a lower stepped patinated wood tier with convex sides and angular projections

This rare pair of pedestal sellettes are based on a design by Charles Percier (1764-1838), the celebrated ornamentaliste and architectural designer, who with his colleague Pierre François Léonard Fontaine (1762-1853), played a dominant role in creating the Empire style. With their distinctive Neo-classical design incorporating tripod legs joined by diagonal cross-banded stretchers (known as à bande croisée), these sellettes compare to a watercolour design for a jardinière by Percier conserved at the Musée des Arts Décoratifs in Paris (illustrated in Madeleine Deschamps, “Empire”, 1994, p. 75) as well as a sheet of drawings for three cassolettes on tripod legs, of which two feature the same internal x-shaped stretchers (exhibited at the Allen Memorial Art Museum, Oberlin, “A New World. Neo Classical Drawings from the Collection of Lodewijk Houthakker”, 1986, no. 95).

Percier was of course not inventing a completely new concept but in his usual manner based his design on antique prototypes and in particular on a green patinated bronze model found at Herculaneum (as publicised by the abbé de Saint-Non in “Voyage pittoresque ou description des royaumes de Naples et de Sicile”, vol. II, 1782, pl. 101). In turn Percier was to influence other artists and designers, especially after he and Fontaine published their Recueil de Décorations Intérieures, Paris, 1801-1812, which significantly included within plate 4, a design for an athénienne which, as here, is supported on tripod legs joined by a set of diagonal x-shaped stretchers.

One of the sellettes closest comparisons is a gilt bronze mounted mahogany guéridon à bande croisée of circa 1805 designed by Percier and Fontaine and made by the renowned firm of Parisian ébénistes, Jacob-Desmalter et Cie, which was delivered in 1809 by the latter to the petits appartements de l’Impératrice at the Palais de Fontainebleau and is today housed at Musée National du Château de Fontainebleau, (J-P. Samoyault, op. cit., p. 196 and J-P. Samoyault, “Fontainebleau, Meubles entrés sous le Premier Empire”, 2004, p. 253). Bearing a remarkable similarity in design to the present sellettes, the Fontainebleau guéridon has a circular mahogany top which is supported on straight gilt bronze legs that in turn are joined by conforming x-shaped stretchers, complete with similar roundel decorations at each end. Again the guéridon stands on a very similar base though instead of the lower stepped tier, it has three carved feet. The sellettes also compare closely to a slightly earlier guéridon of circa 1800 attributed Jacob Frères (the earlier name of Jacob-Desmalter’s firm), again after a design by Percier which, shaped as an athénienne, features an engraved marble map of Versailles on its circular top, lioness ring-handled masks around the circular frieze and plain, slightly tapering tripod legs on lion paw feet. As here, the legs are joined by diagonal x-shaped stretchers (though of gilt bronze rather than wood) which are likewise supported on a concave sided tripartite base. Of significance the latter guéridon was formerly owned by Charles Percier’s family and then descended to the Chardon Collection (sold at Christie’s London, 7th December 1995, lot 88).

The sellettes’ attribution to Jacob-Desmalter is not only based on their similarity in design to the two above examples, particularly the Fontainebleau guéridon, but also the choice of woods, the gilt bronze mounts and their superb quality of execution. Jacob-Desmalter at rue de Meslée, Paris was one of the most important firms of furniture makers during the Empire and Restauration periods. The firm was founded by Georges Jacob (1739-1814), the greatest menuisier of the Louis XVI period. Following his retirement in 1796, he was succeeded by his two sons Georges II (1768-1803) and François-Honoré-Georges Jacob (1770-1841), who worked under the name of Jacob Frères. However, Georges II died shortly after so his brother, who added the suffix Desmalter (named after one of his father’s properties in Burgundy), went back into business with his father and renamed the firm Jacob-Desmalter et Cie. During the Empire, François-Honoré-Georges was described as menuisier-ébéniste, fabriquant des meubles et bronzes de LL., MM., II. et RR (Leurs Majestés Impériales et Royales), implying that he played an active role in the practical side of the firm’s craftsmanship. The firm’s activities expanded enormously following Jacob-Desmalter’s appointment as ébéniste de l’Empereur. Numerous commissions came from the Garde-Meuble Imperial to supply furniture to various Bonaparte residences, especially those of the Empress Joséphine. The firm was also patronised by many notable figures and rich Parisian bourgeoisie. Commissions also came from abroad, for instance from Tsar Alexander I of Russia and Charles IV of Spain. Among the firm’s most important surviving items is the Imperial throne at Fontainebleau, the jewel cabinet made for Marie-Louise and display cases in the Cabinet des Antiques at the Bibliothèque Nationale, Paris. Jacob-Desmalter’s work is also represented at the Châteaux de Compiègne, Fontainebleau, Malmaison, Versailles and Sceaux l’Ille-de-France as well as the Musées du Louvre, Marmottan, Mobile National, Grand Trianon, Napoléon and Tours. In addition, the Bibliothèque Marmottan, Banque de France, Ministère des Affaires Etrangères and the Palais d’Aranjuez in Spain are among many others to house the firm’s work.
Despite phenomenal repute, the firm, like many in the luxury trade, suffered severely from the industrial crisis following the Peninsular War and Russian campaign. In 1813 Georges I Jacob retired, coinciding with the firm declaring bankruptcy. This however was short lived as business revived rapidly after the restoration of Louis XVIII in 1814, and continued up until 1847 when it was sold to Charles-Joseph-Marie Jeanselme.
Many of Jacob-Desmalter’s finest pieces made during Napoleon’s reign were designed by Percier and Fontaine, who enjoyed close links, both on a professional and personal level, with the Jacob family. For instance, when in 1798 François-Honoré-Georges Jacob-Desmalter (then known simply as Jacob) married Adélaïde-Anne Lignereux (daughter of the marchand-mercier Martin-Eloy Lignereux), Percier and Fontaine both attended the signing of their marriage contracts. Later when Percier died, he bequeathed a ring to Madame Jacob-Desmalter, who in turn appointed Percier’s nephew, Alexandre Gabriel Percier as the executor to her will, following her death in 1847.

As befitting works of such quality and unusual design, they would undoubtedly have been commissioned for a wealthy collector keen to acquire pieces that were at the cutting edge of fashion. It is therefore significant that when this pair of sellettes were sold in Paris on 17th June 1921, the sale included pieces from the collection of Esper Constaninovich, prince Belosselsky-Belozersky (1871-1921) and various other collectors. Although it has as yet not been confirmed that prince Belosselsky-Belozersky had specifically once owned them, they would certainly have conformed to his taste since a photograph of his children taken in 1894 includes an ancient Roman-styled seat with lion head masks and lion paw feet; also amongst the prince’s treasures were a pair of late Louis XVI candelabra with Egyptian female supports as well as many other luxury late eighteenth and early nineteenth century French objects and paintings. 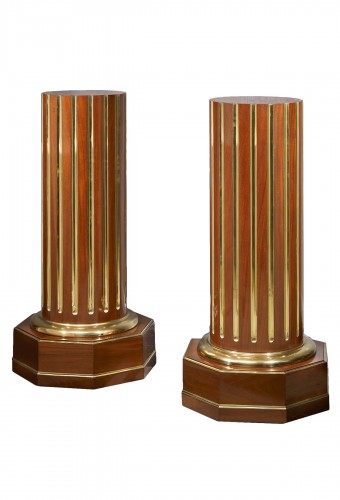 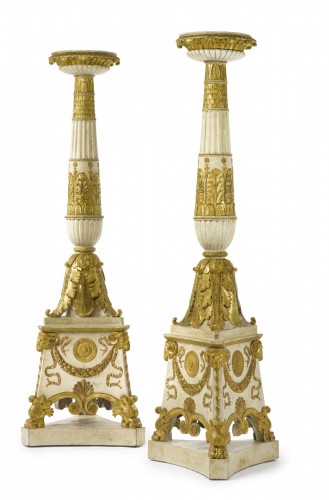 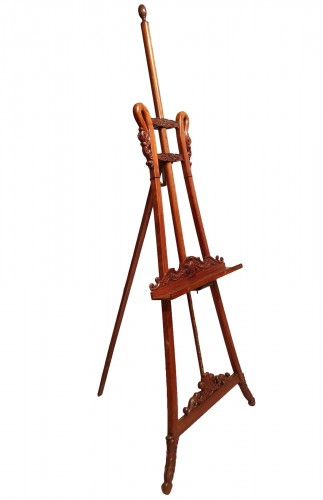