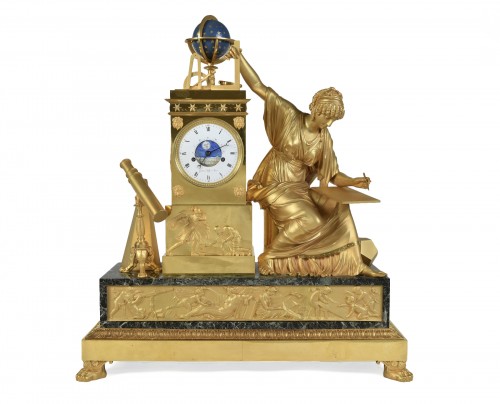 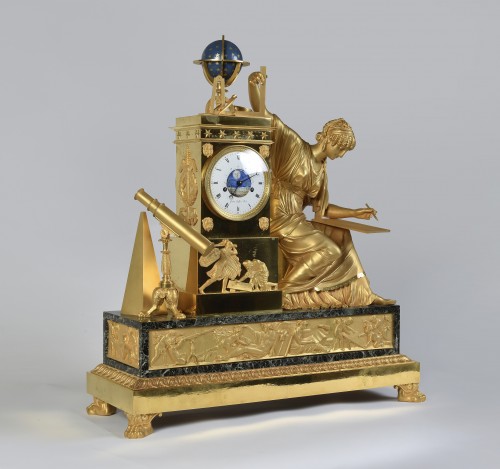 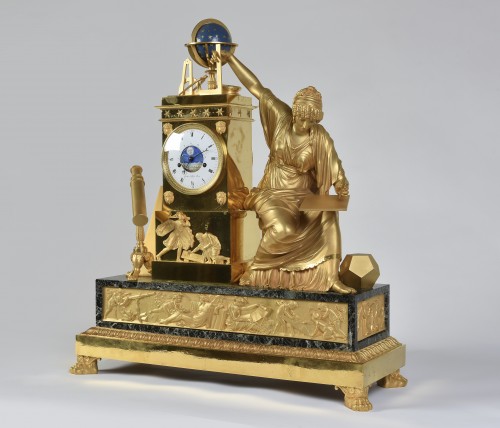 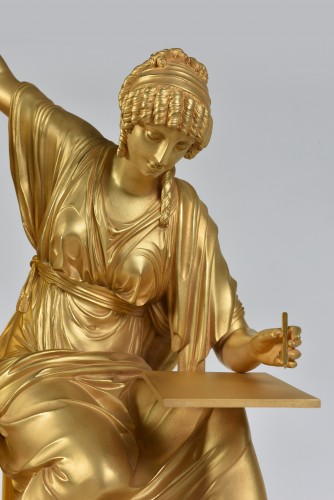 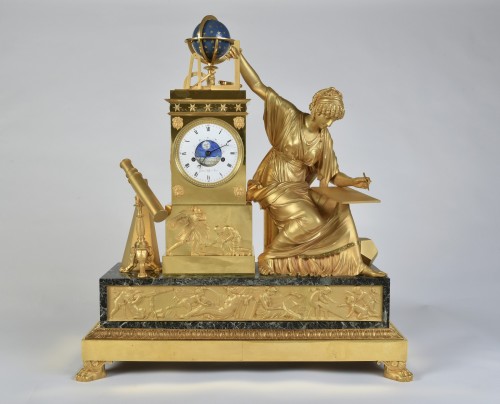 A rare and magnificent Ormoulu and vert de mer marble mantel clock of eight day duration, the white enamel dial with Roman numerals and blued steel hands for the hours and minutes and central blued dial gives the position of the moon . The movement with silk thread suspension, anchor escapement, striking on the hour and half hour on a single bell, with outside count wheel.

The extremely rare bronze case featuring the dial set within a stepped rectangular plinth and surrounded by four lion head masks surmounted by a celestial globe and various geometrical instruments including compasses, a folding rule and ruler, mounted below the dial by a scene representing the death of the great mathematician Archimedes being slain by a Roman soldier, the plinth sides mounted with winged ribbon-tied wreathes, to the right of the clock is Geometry personified represented by a beautiful seated classical maiden wearing loose drapery, holding her right hand up to the globe as she looks down toward a tablet resting on her knee, beside her feet is an irregular polyhedron as described by Archimedes, while to the left of the dial is a telescope resting on a tripod with lion paw feet behind which is an obelisk. The whole on a stepped vert de mer marble base mounted with a lotus leaf band below an elaborate gilt frieze probably representing an apotheosis to Archimedes showing at centre a young winged male reclining as he crowns a putto with one hand and rests his other on a large open book, seated facing away from him a young classical female representing either Rhetoric or History, to their left a pair of putti looking through a telescope and to their right three putti drawing up mathematical plans, the base supported on gilded lion paws.

The subject of this magnificent clock dwells on history's greatest mathematician Archimedes (287-212 B.C.). He was born and died at Syracuse in southern Italy - a place he hardly ever left except for an early voyage to Alexandria where he studied the work of the famous mathematician Euclid (b. circa 330 B.C), whose books on geometry were until quite recently used in all schools. Archimedes's admiration of Euclid explains the presence of the figure of Geometry on our clock; indeed Geometry is here synonymous with Euclid. The mount below the dial then explains the nature of Archimedes's death. The Romans repeatedly attacked Syracuse but thanks to the military engines invented by the great mathematician the city managed to defend itself for some two years. When the Roman general Marcellus eventually blockaded the city he summoned Archimedes; a soldier went to collect the elderly man who declined to go until he had finished solving a problem, whereupon the soldier killed him with his sword. Marcellus was saddened by the loss of such a great intellect and erected a tomb in his honour which Cicero later discovered. Archimedes's death inspired a number of European artists including Sebastian Ricci (1659-1734) and Eugène Delacroix (1798-1863).

The clock case is of a rare; this together with its quality, fine details and subject indicates that it was made as a special commission and possibly could have been made for the Académie des Sciences or similar learned institution. Like a number of clocks of the period it reflects Europe's fascination with science and mathematics.

An almost identical clock was to be found on the 2009 stand of the Swiss Antiques Richard Redding it is the only two known clocks of this model.

The interest in science continued after the Revolution and was to inspire a number of Empire bronziers and designers such as Jean-André Reiche (1752-1817) who conceived several clock models relating to Astronomy of which there is a pen and ink design for his clock La Leçon d'Astronomie (Cabinet des Estampes de la Bibliothèque Nationale) as well as a completed clock by Reiche and Claude Galle (1759-1815), (respectively illustrated ibid, p. 374, pls. 5.15.1 and 5.15.2). As here the clock includes numerous scientific instruments as well as globes. 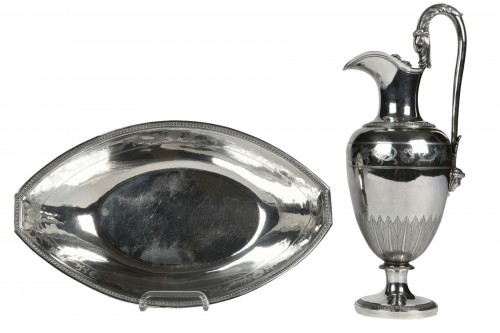 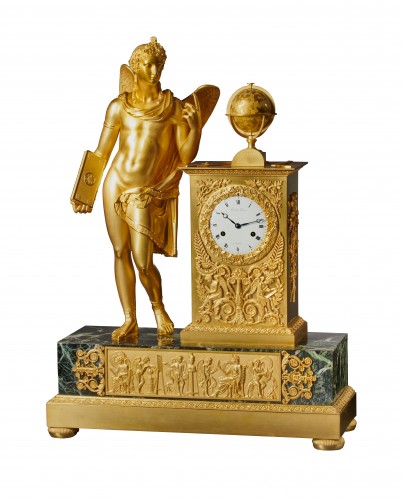 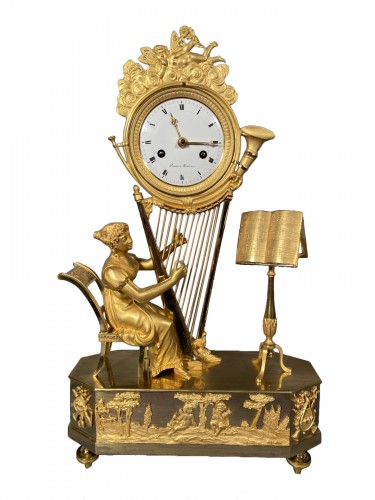