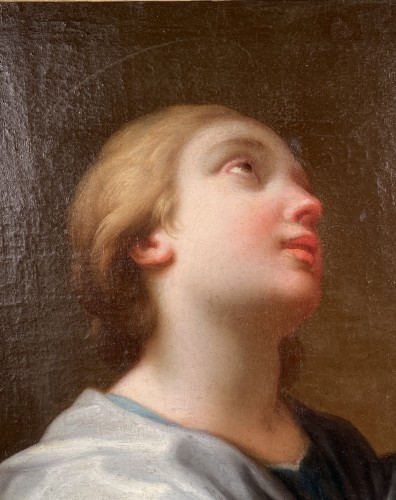 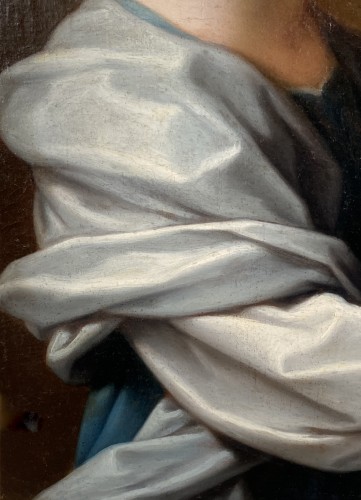 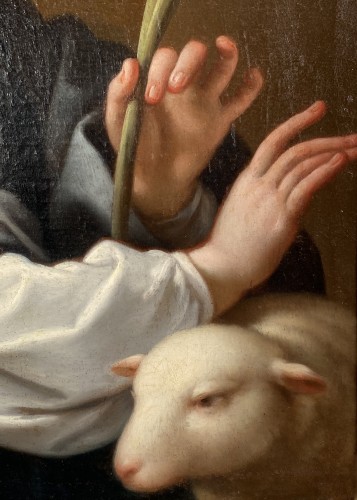 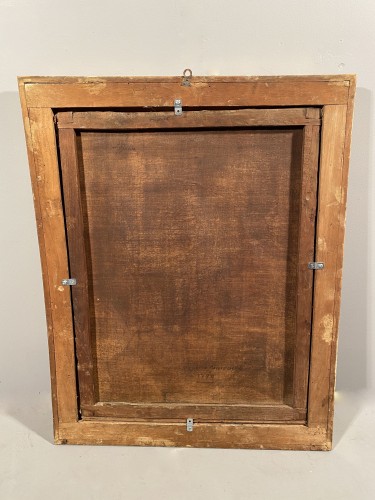 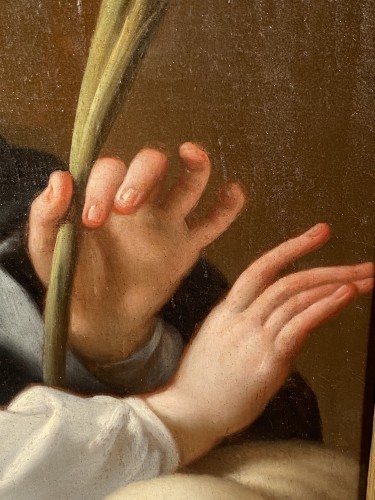 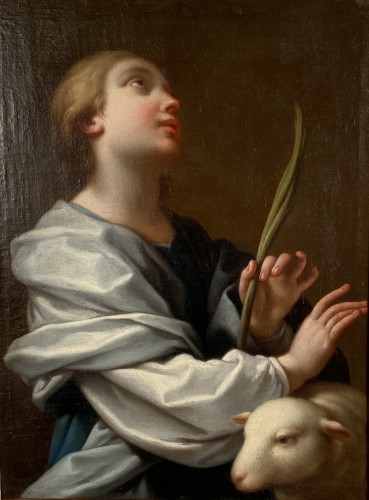 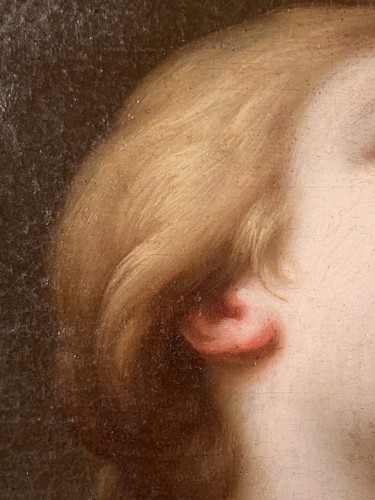 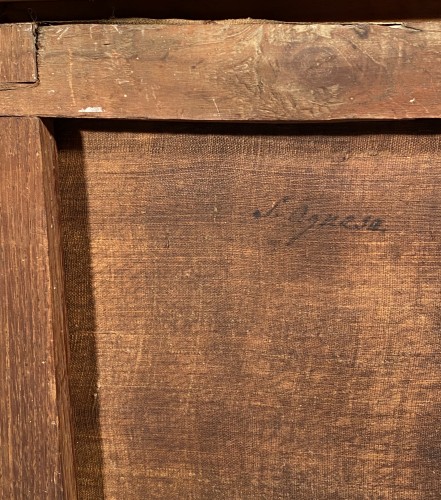 Beautiful oil on canvas representing Saint Agnes of Rome.
Haloed with a ring of light, the saint is depicted in ecstasy, her head tilted slightly back, looking up to the heavens.
Dressed in a blue dress and a white overcoat, she holds the palm of martyrdom in her hand.
At his feet stands a white lamb.

Entitled on the canvas on the reverse "St Agnesa", signed "Stefano Parrocel" and dated 1749.

Étienne Parrocel is a French painter born in Avignon in 1696, died in Rome in 1775.
He is the son of Jacques-Ignace Parrocel (1667-1722) and Jeanne Marie Perrier.
He was baptized on January 8, 1696 in the parish of Saint-Giniès in Avignon.
He worked with his uncle Pierre Parrocel (1670-1739) and went with him to Italy where he settled.
He became completely Italian to the point of signing his paintings Stephano (or Stefanus), hence the name of Étienne Parrocel Le Romain. From the end of 1730, he received numerous commissions for the churches of Italy and his native Provence. In 1734 he became a member of the Academy of Saint Luke. he decorates several churches, including the Basilica of Saint Praxedes and the dome of the Church of the Madeleine in Rome.

- The Calvet d'Avignon museum has a large collection and dedicates several rooms to the work of the Parrocel family, who was born in the city.

• Blessed Joan of Valois, study for the Church of Saint Louis of the French (Rome), Louvre Museum.
• Portrait of Cardinal Pierre Guérin de Tencin, Comtadin-Duplessis Museum (Carpentras).
• Portrait of Cardinal Giovanni Battista
• Portrait of Cardinal Melchior de Polignac, Comtadin-Duplessis Museum (Carpentras).
• Portrait of Cardinal Pompeio Aldrovandi.
• Virgin and Child, Comtadin-Duplessis Museum (Carpentras).
• Saint François Régis in prayer during the plague of Toulouse Musée des Augustins de Toulouse.
• Saint John the Baptist designating the Messiah, Musée Calvet (Avignon)
• Saint Camille de Lellis presented to the Trinity by Marie Madeleine, preparatory study for the decoration of the dome of the Church of the Madeleine in Rome, Calvet Museum (Avignon).
• Jesus and the Samaritan woman, at the Fesch museum in Ajaccio.
• Adoration of the Magi, 1749, canvas for the altarpiece in the Chapel of Dawn in the Notre-Dame d'Amiens cathedral.
• Numerous pen drawings at the graphic arts department of the Louvre museum, at the national school of fine arts in Paris, etc.

To represent Saint Agnes, a true Roman icon of Christendom, the painter must succeed in transmitting the gentleness, chastity and purity that surrounds the legend of the saint.
Etienne Parrocel shows us here the extent of his talents, with a particularly accomplished work.
Great colourist, he manages to make us feel the silky texture of the wool of the lamb or that of the clothes of the saint, and while using the procedures of Caravaggio, with an oblique lighting, he tempers the brutality of the effect chiaroscuro, with a softer light that brings a lot of serenity to the scene.
Although the facial expression is inspired by Italian works, in particular that of the Neapolitan painter Bernardo Cavallino, Parrocel also chooses to moderate the ecstasy, to make it felt rather than showing it, by forcing the features.
This mixture of Italian techniques, softened by a French touch, characterizes the work of Parrocel and more generally that of the Provencal school of the 18th century.
This revival from France at the height of the Enlightenment will allow Etienne Parrocel to establish himself in the world capital of the arts, by receiving numerous orders from the highest summit of the Catholic Church, for paintings in religious character, subjects which were until then the preserve of the greatest transalpine painters. 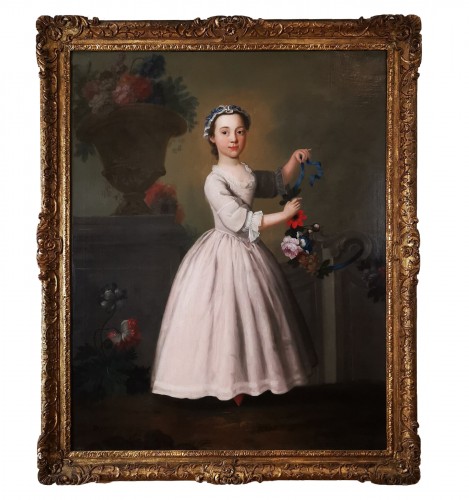 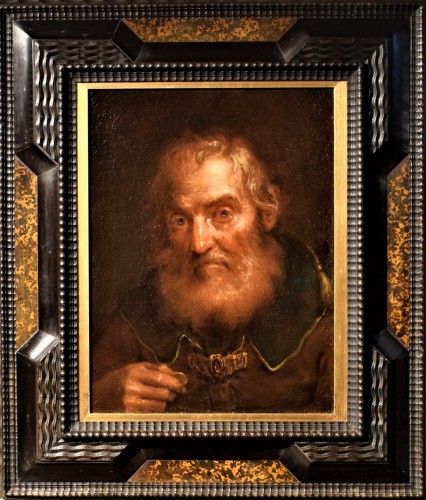