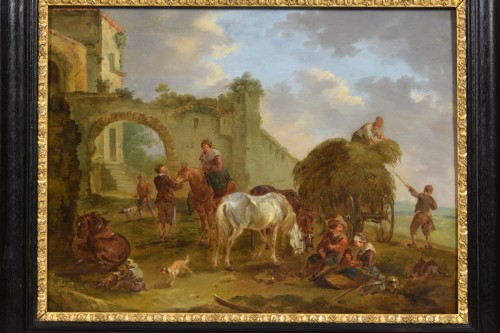 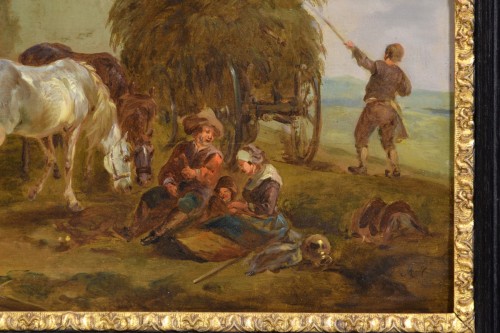 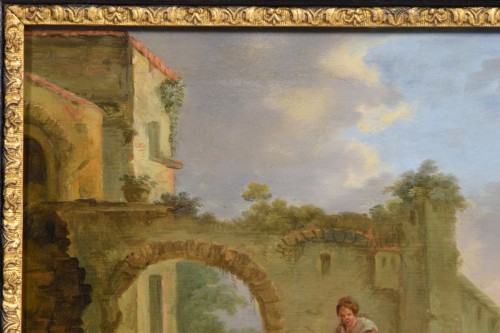 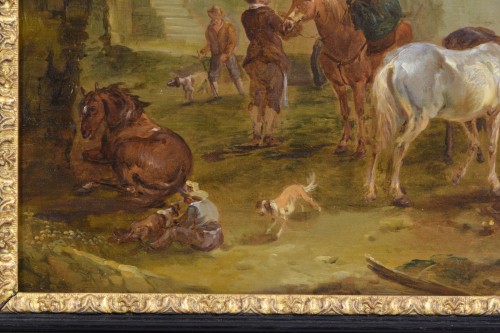 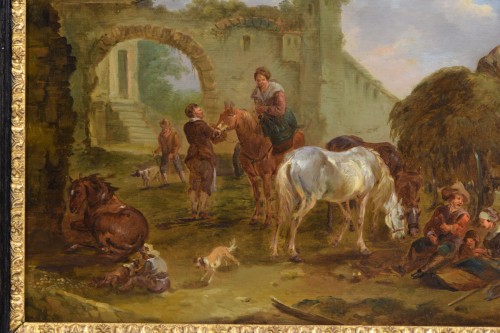 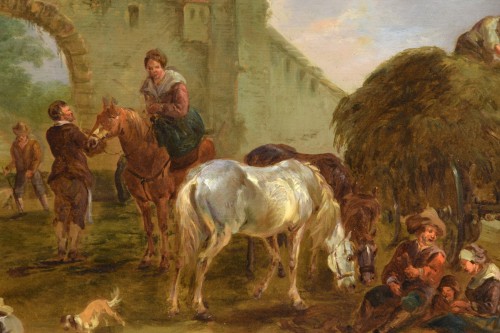 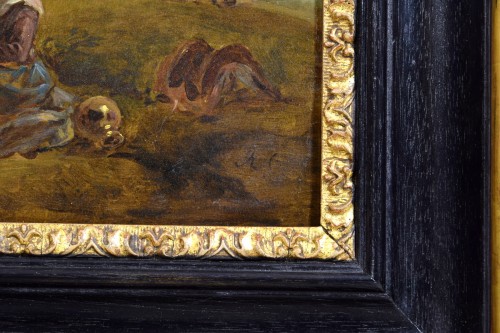 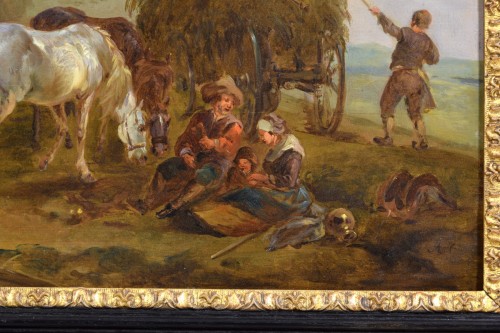 Jan Miel (follower of)
The bambocciante scene
Oil on panel

The bright painting, with great chromatic impact thanks to the technique of oil on panel represents a lively bambocciante scene, whose characters are located in a countryside, near the entrance door of a town or a village. With the term bambocciata are called the kind of painting aimed at representing, with figurative vivacity and animated effects of light and color, episodes of urban and rural life, street scenes, taverns, market, animated by people, gypsies and peasants. This subject spread especially in the 17th century, in open contrast with the great official baroque painting, and was thus called by the nickname “bamboccio” given to the Dutch painter Pieter van Laer, who worked in Rome in the first half of the 17th century.
The scene here depicted with great vitality, through the use of quick touches and textures of color, illustrates a moment of everyday life related to rural activity: on the right is painted, at the gates of the village, a cart loaded with hay that two farmers are setting up. Before them sit some figures who stand beside their horses. A woman on his horse reaches a passer-by while a shepherd walks behind him with his dog. On the left, a child is sitting on his back, playing with small dogs next to a horse that rests seated. The entrance to the village is characterized by an arched passage between ancient walls, described with poetic “rovinismo”, in addition to which there are some houses. The clear sky is marked by some grey white clouds.
The painting shows a close relationship between the composition and the famous paintings by Jan miel (Antwerp 1599 - Turin 1663). Born in Beveren-Waas near Antwerp, Miel was trained at home, perhaps at the workshop of Gérard Seghers and then Anton Van Dyck. In 1636 he was documented in Rome (Italy) and in 1648 he joined the Accademia di San Luca, of which he became Prior in 1661. After the frescoes now lost in Santa Teresa at the waterfront painted for the Barberini, he completed the pictorial cycles in the churches of San Martino ai Monti, Santa Maria dell'Anima and San Lorenzo in Lucina and participates in the important decorative enterprise of the Gallery of Pope Alexander VII Chigi in the Palazzo del Quirinale. To the production of cultured painter of history, he added that of the "bambocciate", considered his best works and often confused with those of Pieter Van Laer and Michelangelo Cerquozzi, and also collaborating with painters of architecture, such as Alessandro Salucci and Viviano Codazzi.
At the end of 1658 Miel moved to Turin in the north of Italy at the invitation of Duke Charles Emmanuel II. His art was already known in Piedmont, since 1651, thanks to the “Madonna that presents the Child to San’Antonio da Padova”, created for the cathedral of Chieri. Thanks to the prestigious Roman credentials, in the city of Savoy he was responsible for the decoration of the Royal Palace and the Reggia di Venaria, then under construction. For Venaria he received the order to fresco the vault of Diana’s hall (1661 1663) and to provide for the walls the canvas with the equestrian portrait of Adelaide and Ferdinando Maria elector of Bavaria (now in the Castle of Racconigi) and the ten hunts preserved today at the Civic Museum of Ancient Art of Palazzo Madama in Turin (1659 1661). The ducal commission also concerns the City Palace, where the Miel performs the plafonds of the Throne Room (Peace dominates the warrior furor) and of the Council Hall, already alcove (Sleep of Hannibal) and of the alcove (Clodoveo receives the sign of the lily) in addition to numerous overalls, then removed in the following outfits and not all of which have been traced.
The work is signed with a monogram M.C. (?) at the bottom right. The author of this painting will be sought after among the painters followers of Jan Miel, active in the 18th century. Some typical characteristics of the master’s bambocciate, both compositive and stylistic, can be recognized, such as the writing and the physiognomic typologies of his mature production. The painter describes with care the different protagonists, their gestures and garments; attention that indicates a study from the true of everyday life, read and interpreted with naturalism. The brush stroke is quick and easy, and the author is able, through the highlights, to render volumes and depths.
Historical and artistic studies are being carried out with a view to outlining more clearly the figure of the author.
The artwork is in good condition.

we apologize for any translation errors 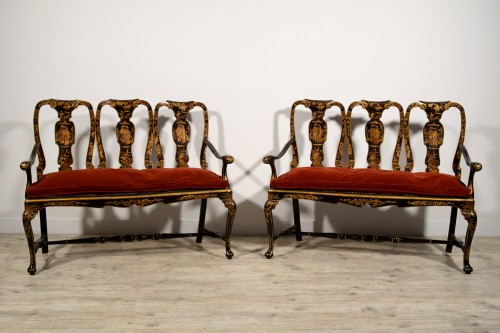 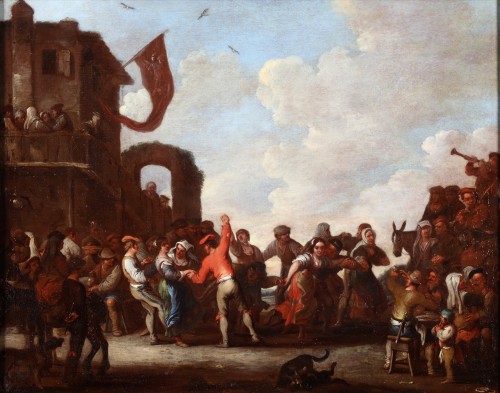 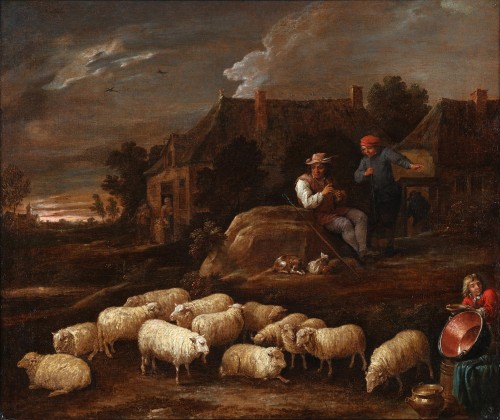 Portrait of a Lady of quality end of 17th century 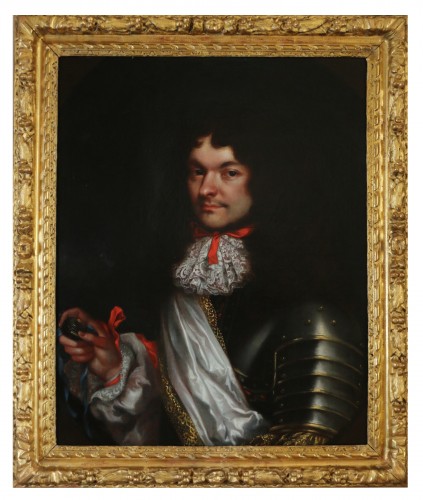 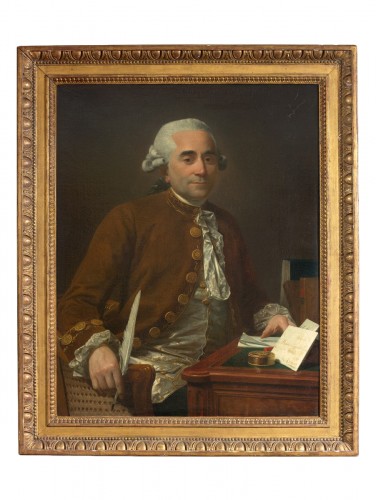