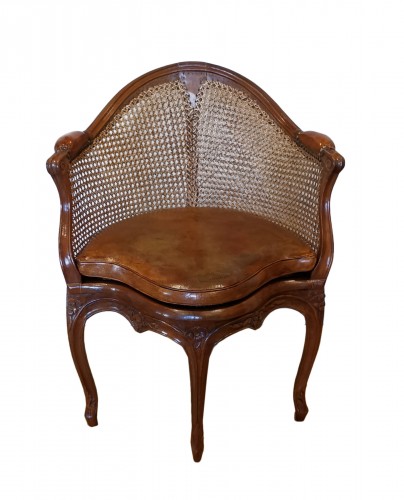 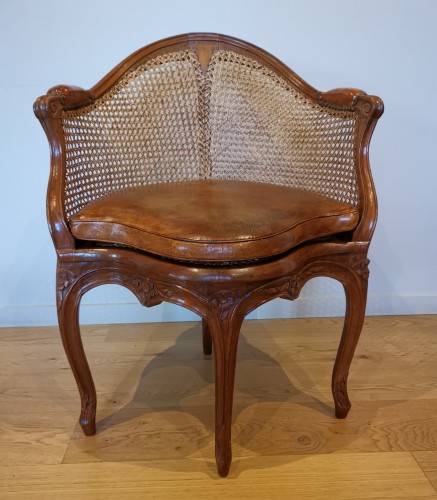 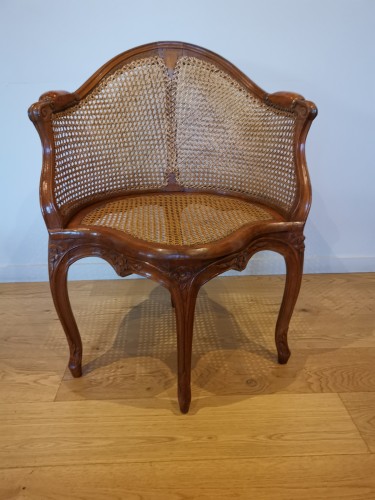 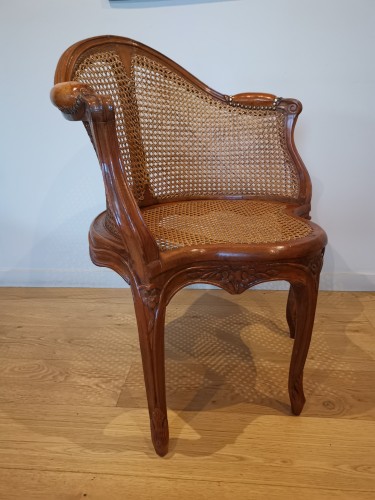 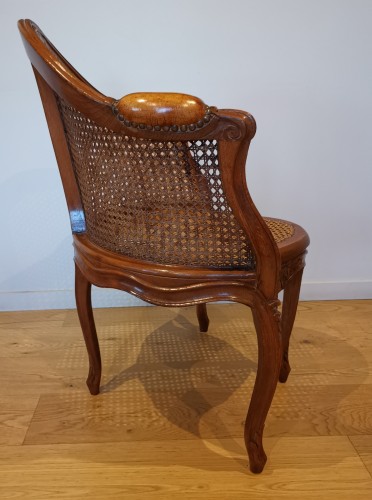 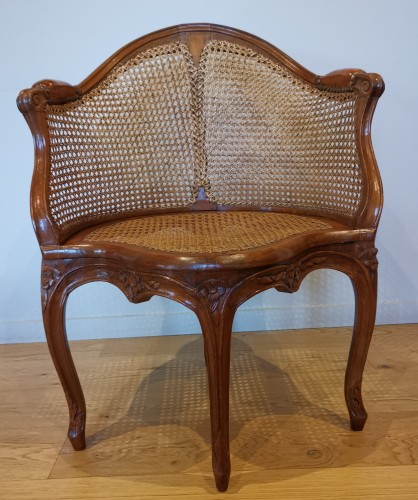 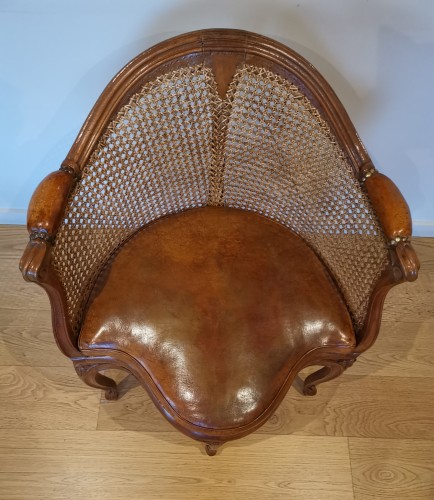 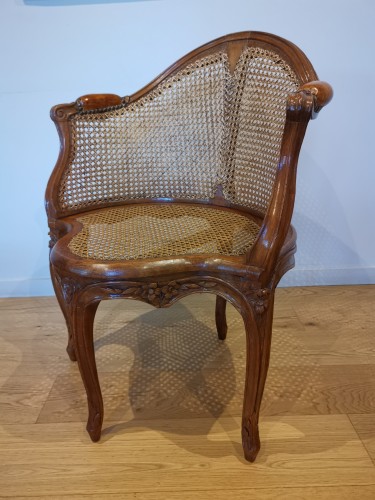 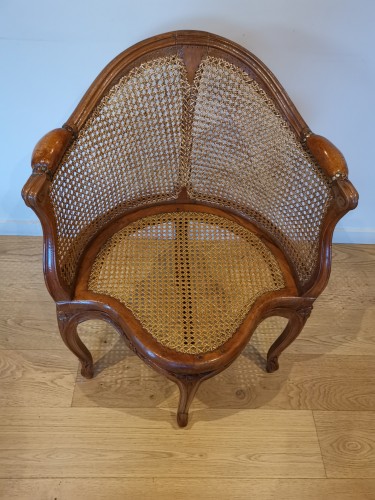 Large cabinet armchair, Louis XV period in carved, molded and waxed beech wood, caned; curved gondola shape, it is as enveloping as it is harmonious. The woodwork of his backrest runs with a single jet, to the armrests so that it seems to continue all around the seat. An elegant work of graceful and deep moldings, all in curves and countercurves enhanced by fine sculptures of flower buds and foliage adorns the decor. This office chair has an atypical foot layout, an ingenious invention due to the innovative talent of master cabinetmaker Etienne Meunier at the beginnings of the reign of Louis XV. This very innovative technique consists in shifting the usual layout of the base; it is not arranged in a square as usual but in a diamond at the four cardinal points, so as to optimize its stability. The forefoot being located at the front of the belt in its median part in strong projection; in this way the user can arrange his legs on either side of it. Being intended to be seen from all sides, great care is taken to the smallest details. We note on the back of the central upright, the vertical strip which is used to seal the rod fixing cavity. Each of the four feet slightly arched and raised at its ends with an acanthus leaf. The seat paddle, also dark in cane, is decorated with a cognac leather  cushion to match the armrest cuffs, both of which are identical. It should be noted that great care has been taken with connecting elements of impeccable quality. Balance, nervousness, elegance and quality are the most appropriate terms for this avant-garde seat very representative of the first period of the reign of Louis XV. The armchair which we present to you is to be compared to the production of the Parisian cabinetmaker Etienne Meunier, reproduced in "the seats" of Guillaume Janneau as well as on page 14 of the collection; "Bois de Siège" by E. Dumonthier in Charles Massin editions or in "French furniture of the 18th century" by Kjellberg illustration page 609.
Parisian work from the mid-18th century, Louis XV period, attributed to Etienne Meunier. Etienne Meunier specializes in the production of diamond-shaped office armchairs, with a gondola backrest and fitted with a median leg. Upholstered in leather or caned like our model, its seats were delivered to several merchants such as Pierre Migeon. 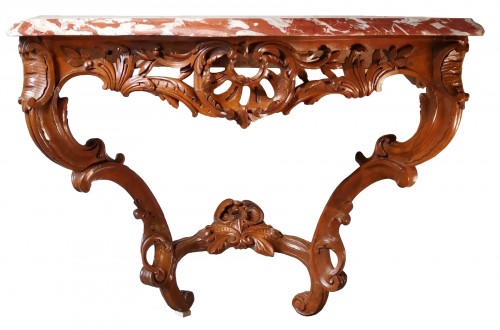 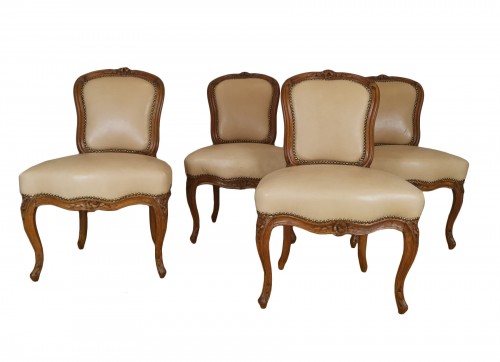 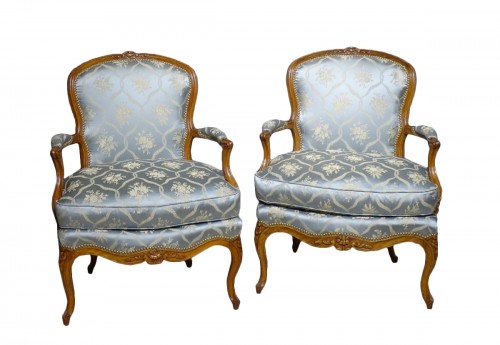 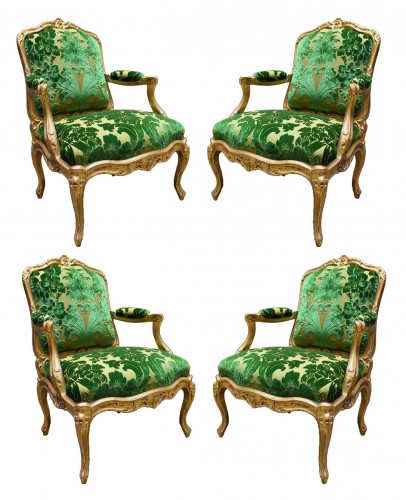 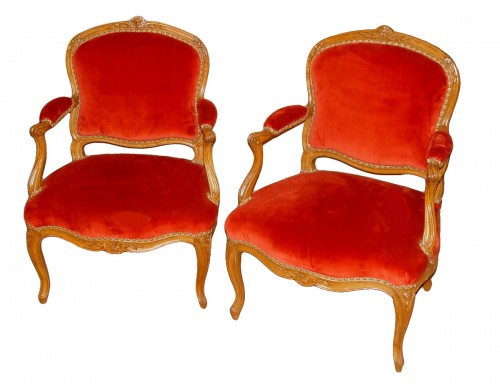 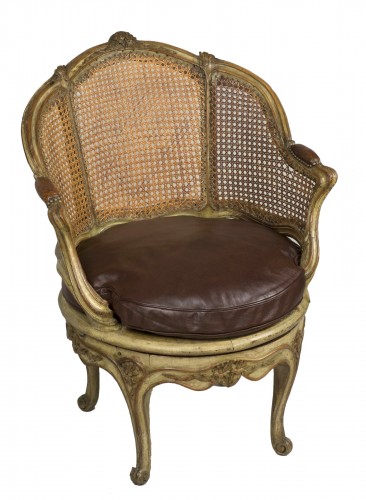 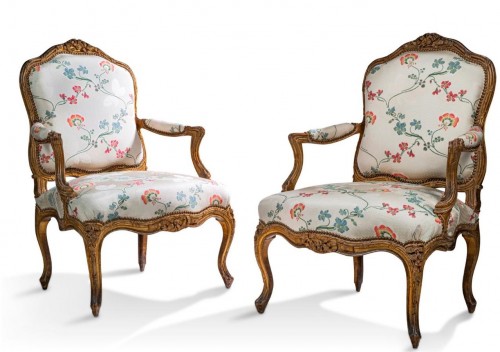