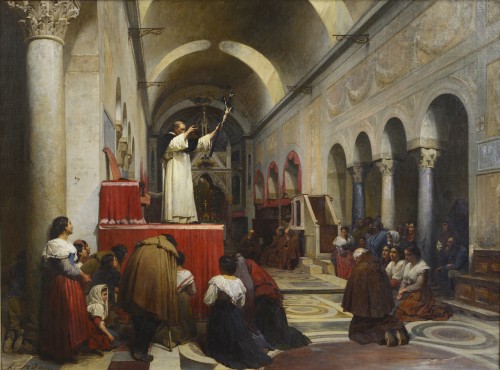 A preaching in the church of Bocca della verita, in Rome

He began his art studies in the 1850s and then returned to the École des Beaux-Arts in Paris where he was a pupil of François Picot in the early 1850s and of Alexandre Cabanel probably from 1864 or soon after. Adan made his first shipment to the Paris Salon in 1863. He remained registered as a Cabanel pupil in the booklets until 1886. As CH Stranahan recounts in his History of French Painting: “No fewer than 112 exhibitors from the 1886 Salon signed 'Élève de Cabanel'. They are as varied in style as they are numerous, which testifies to the greatness of their teacher as a master: he develops talents without making them servile imitators ". Stranahan's comments also indicate that Adan's classmates included military painters, orientalists, genre painters and naturalists; surely an environment which encouraged wide aesthetic discussions among young artists.

Adan's work in the 1860s embraced the dominant tradition of academism. Indeed, the two paintings exhibited at the Paris Salon by Adan in 1867 - of which ours is a part - are a clear tribute to the academic painting carried by Ingres, with premonitory thing, an early tinge of naturalism; We'll talk about it again later. This tribute to Ingres, who died the same year on January 14, 1867, was undoubtedly intended not only to testify to Adan's admiration for the master, but also his aspiration to perpetuate the tradition that Ingres represented.

From the mid-1870s, when France began to rebuild after the ruin of the Franco-Prussian war, Adan seemed to focus more and more on the scenes of daily life, something that was already presented in our 1867 painting. He was rewarded in 1875 with a third medal at the Paris Salon. It was also during this period that he confronted his unique large decor known to his hand to this day: it is the monumental religious composition representing the Trinity in glory which he produced in 1870 for the choir of the Church of Saint-Pierre-Saint-Paul in Courbevoie. The whole was established there in 1892.

In the years 1880-1890, Adan held a workshop at 75 rue de Courcelles, which suggests that he was then well established. He concentrated during this decade on a naturalist painting with many rural scenes with an agrarian theme. He was again well rewarded: second medal in 1882 and gold medal in 1889 at the Paris Salon and regularly received favorable reviews. In the mid-1880s, Adan was actively involved in the naturalist movement where he was grouped with Jules Breton, Léon Lhermitte and Jules Bastien-Lepage in Stranahan's book. More recently, Adan was included in a Florentine exhibition in 2004 on naturalism and symbolism, always in the company of Léon Lhermitte.
Besides his production of paintings, ADAN was an excellent watercolorist and had the opportunity to also illustrate in the 1880s several works such as the Complete Works of Alphonse Daudet or A simple heart by Gustave Flaubert for the best known.

His reputation as a distinguished and collected painter, particularly in France and the United States - the collector Charles Warren Cram bought several of his paintings exhibited at the Paris Salon of 1889, was recognized in 1892 when he was raised to the rank of knight of the Legion of Honor and admitted in 1900 to sit on the jury of the Salon and the Salon of French Artists.

The last decades of Adan's life are curiously obscure. His work was included in the Panama-Pacific International Exposition in San Francisco in 1915; then again in an exhibit at the Toledo Museum of Art in Ohio.

He continued to exhibit annually at the Paris Salon until his death in 1937.

Concerning the place represented, it is the minor basilica of Rome known as Santa Maria in Cosmedin located in the southern part of the historic center of Rome, near the Tiber. It is a very old church built in the 6th century on the remains of the Temple of Hercules in the Forum Boarium. The church took the name of Schola Graeca in the 7th century following the installation of a community of Greek monks. They also participated in its decoration under Pope Adrien Ier. In tribute to its appearance, it now bears the name "Cosmedin", from the Greek "Kosmidion" which would mean "ornate".
It was from 1971 that Pope Paul VI donated this minor basilica to the Greek-Melkite Catholic Church as a place of worship in Rome.
Architecturally, it is noted a remarkable medieval pavement from the old St. Peter's Basilica. In the peristyle, at the entrance, is the famous Bocca della Verità.