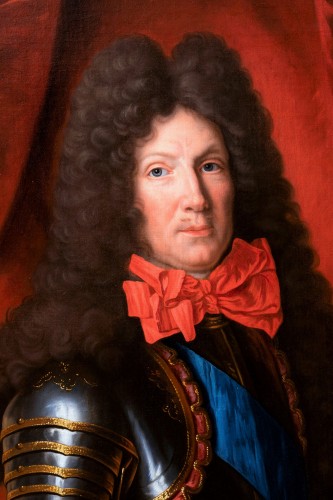 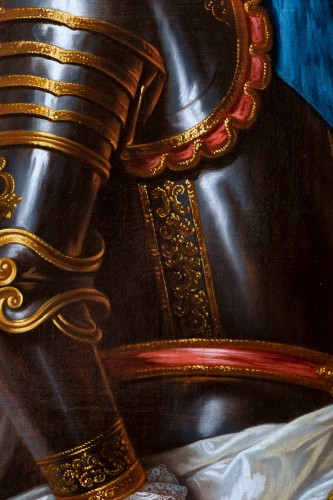 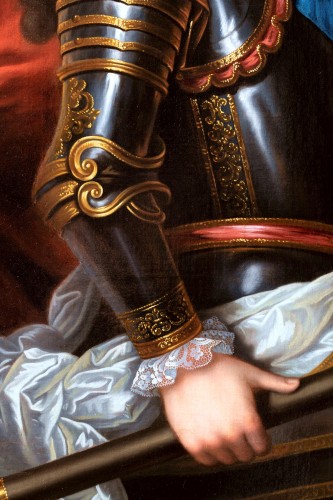 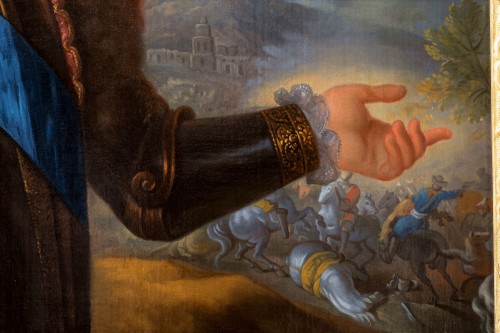 Important formal portrait of the Marshal of France under the reign of Louis XIV, Count Claude de Choiseul-Francières, knight of the order of the Holy Spirit.
The painting depicts the marshal to mid-thigh, life-size, turned at three quarters, looking at the spectator in the face.
His face with soft expression appears in the middle of the wig's curls, whose chestnut tone is lifted by a hint of powder. The oblong face with clear forehead and the cheeks covered with pink blush is enhanced with a fine mustache framing its mouth with the lips sketching a half smile.
He wears a neck tie made of a red ribbon tied in shells, which is reflected in his breastplate on the inside of his right arm. Fully clothed in armor adorned with golden studs with strong metallic reflections and gold ornaments with various patterns, especially on the joints. In addition to the red bow, he wears some ornaments, including the shoulder pads and belt of red velvet, the sleeves of fine white lace. He wears the blue cord of the Order of the Holy Spirit across the breast.
Wrapped around his waist, his large white scarf of command fringed with gold is tied on his right hip by a complex knot, the ends of which floated like the flag during the cavalcade allowing the army to rally around the commander in chief.
He holds in his right hand the marshal's baton with gilt ends and with his left hand shows one of the battles which brought him glory, the battle of Saint Gothard against the Turks.
The prestigious character of this portrait is accentuated by the important red curtain fringed with gold which serves as a background for the figure of the marshal, the red color being synonymous with glory and power.
Creating the theatrical setting, the curtain opens onto a battle scene under a cloud-laden sky. The arrangement of the drapes, expertly modeled with crimps of a bright red and contrasting pleats brings depth to the composition.
The crumpled drapes at the sharp angles of the white scarf, executed in shades of gray reveal the volumes and shine of the satin, the white reflections giving off a strong light.
This vibration of the fabrics counterbalances the static position of the character and animates the portrait.
Powerful lighting coming from the left, is reflected in the breastplate and illuminates his face, certainly with a flattering approach as it should be at the time, but still realistic as regards the age of the model (the slightly drooping eyelids, general drooping of the face, wrinkles around the mouth).
The fine and precise brush of our artist draws the exquisite lace and the numerous golden ornaments of the armor.
This quality of drawing associated with the vigorous brush, allows us to attribute our work to one of the most famous portrait painters during the reign of Louis XIV, Pierre Mignard.

The large original giltwood frame, finely carved with scrolls, accentuates the imposing character of this work.

Very good condition and the freshness of the original colors seduces us in this powerful and glorious portrait and gives us a brilliant image of the majestic reign of Louis XIV, the Sun King.