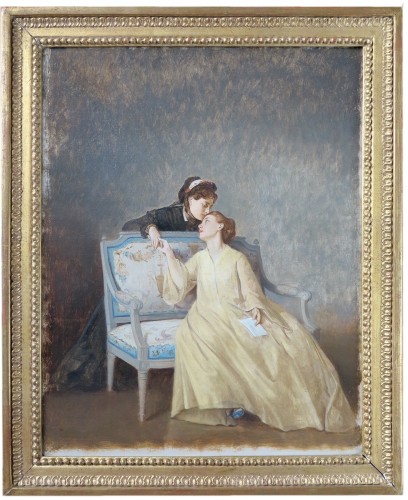 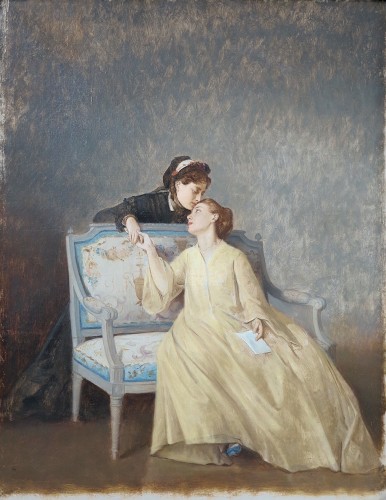 Pupil of Charles GLEYRE since 1846, Auguste TOULMOUCHE was one of the most famous painters of the Second Empire, like Alfred STEVENS and CAROLUS-DURAN.

In his early days, in the 1850s, he painted genre paintings inspired by Antiquity and was part of the "neo-Greek group" created by Jean-Léon GERÔME, HAMON and PICOU, all three pupils of DELAROCHE. Following the example of HAMON, the world of childhood was one of his favorite subjects. Their spontaneous innocence and curiosity provided TOULMOUCHE with original themes in which the painter could use his imagination to seduce or amuse.

Later, however, he abandoned the neo-Greek style and turned to the contemporary world. He was then one of the first painters to compose scenes inspired by the bourgeois life of the Second Empire. He devoted himself especially to the scenes of genre, interiors of social life and to the female portrait, which made his fame. He did not hesitate to reuse in his worldly canvases motifs previously used in his neo-Greek works.

He became the cousin by marriage of Claude MONET following his marriage in 1861 to Nantes with Marie LECADRE, daughter of a lawyer from Nantes. TOULMOUCHE will help MONET during his early years in Paris, especially by encouraging him to follow the teaching of Charles GLEYRE.

Auguste TOULMOUCHE is buried in the Montparnasse cemetery.