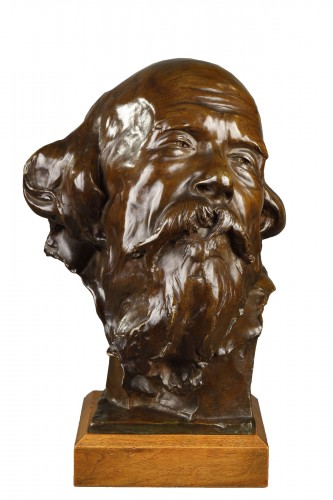 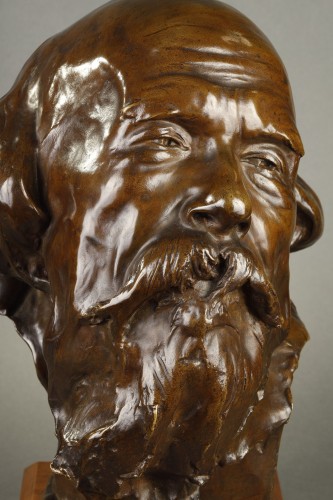 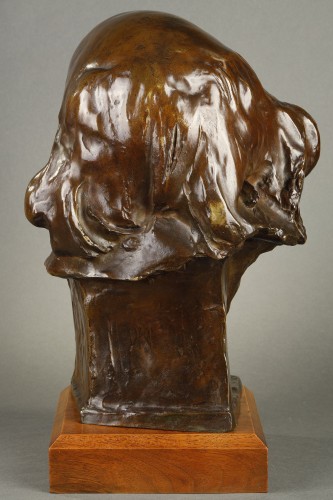 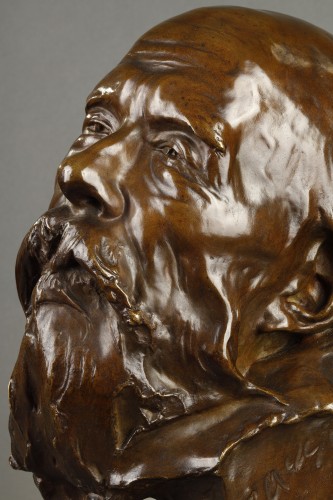 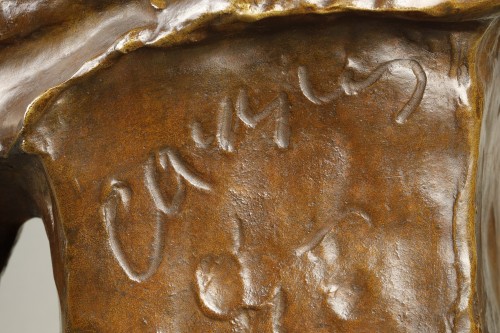 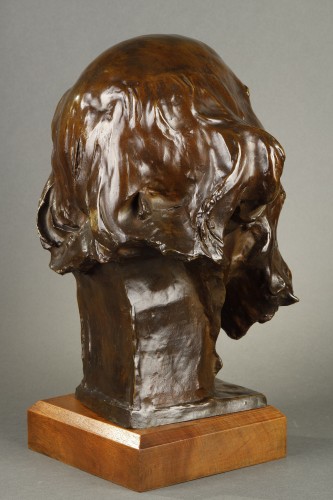 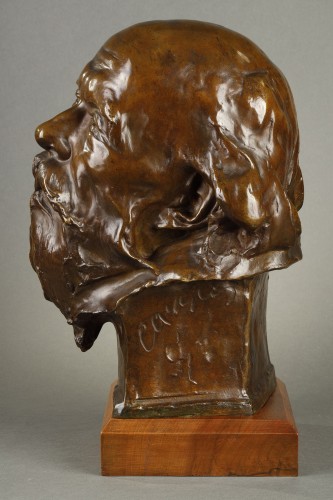 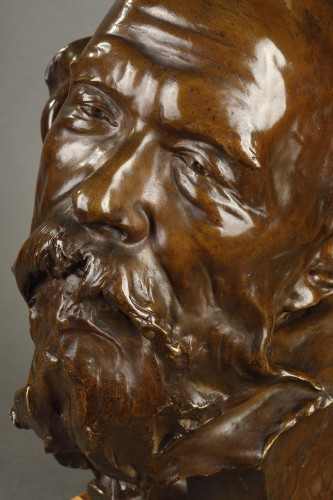 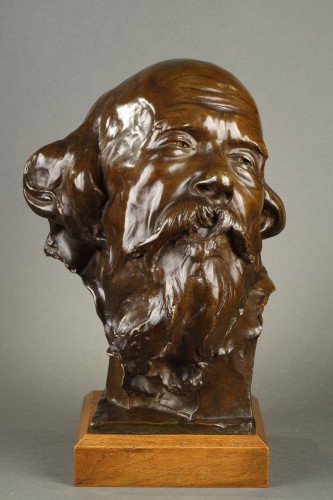 Bronze with a nuanced dark brown patina
old cast, probably by Pierre Bingen
Presented on its original walnut wood base

Biography :
Jean-Joseph-Marie Carriès (1855-1894) was a French sculptor and ceramist. Orphaned in 1861, at the age of 6, he then apprenticed as a stamper and modeler to a sculptor of religious objects, Pierre Vermare from 1868, and studied parallel, when the opportunity arose, at the School of the fine arts of Lyon, on the advice of his master. He quickly revealed his personality and discovered Gothic art in museums and churches. He left the Vermare workshop after two years and worked alone until the end of 1873. Carriès moved to Paris in 1874 where he became temporarily a student of Auguste Dumont and received advice from Alexandre Falguière and Henri Lehmann. He failed the entrance examination at the Ecole des Beaux-Arts in Paris and worked then alone, according to his own inspiration. Carriès met in Paris his compatriot Jean-Alexandre Pézieux who came to Paris the same year to enter the Beaux-Arts. He helped Carriès without a personal fortune by giving him some advice and by sharing with him a part of the purse that the city of Lyon gave him. Not wishing to remain in the care of Pezieux, who was not very fortunate, he left him and wandered in the streets of Paris.

During the years 1875-1888, Jean-Joseph-Marie Carriès was first of all recognized for his portraits and earned his lives with this type of commands, which does not prevent him from experimenting forms quite audacious and straight out of his imagination. His first participation in a salon dates from 1875. The first busts he exhibited were extremely detailed in their bill and he was accused of having actually made casts on nature, as was blamed Rodin. In 1877 he joined an infantry regiment, but he obtained permission to continue modeling, and a leave allowed him to return to Paris until his release. Carriès was very much noticed at the Salon of 1881, which was the salon which made him known and where, he exhibited the theatrical "Decapitated head of Charles I" for which he obtained honorable mention. In 1882, he exhibited his busts of the "Disinherited" in plaster, enriched with patinas, representing marginalized and poor people and mixing naturalism and symbolism at the Circle of Liberal Arts. This series was completed by other busts very personalized in plaster, wax and finally bronze, family members, religious figures and strange and disturbing babies. At the Salon of 1883, he exhibited "The Bishop", who was also successful and received the honorable mention. This bust and that of Charles I were cast in bronze and were acquired by the French State in 1889. He made other busts in the period until 1888 as those of "Jules Breton", "Vacquerie", "Loyse Labbé", "Franz Hals", "Ms. Hals or Woman of Holland", "Velasquez", "The Nun", "The Infante" or "The Warrior". The busts of Carriès were edited in the studio of Pierre Bingen, one of the first to practice lost casts in Paris, which gave to his works a particular patina.

Carries' interest in glazed sandstone and ceramics dates back to the 1878 World Fair in Paris, where he could see examples of Japanese works. He was encouraged in this approach by Paul Gauguin, to whom he was presented during the winter of 1886-1887 by Ernest Chaplet in his ceramic workshop. In 1888, fleeing the official Salon, Carriès exhibited his works in the Paris mansion of his patrons Paul and Aline Ménard-Dorian and met a real success allowing him to realize his dream of making sandstone works.

In the fall of 1888, Carriès gained sufficient financial independence to devote himself essentially to perfecting the complex process of making enamelled stoneware pottery: "this porcelain male" as he called it. The artist set up a workshop in Saint-Amand-en-Puisaye, a city known for its clay and potters. Firmly committed to his role as an artist-artisan, Carriès created glazes in subtle variations of brown, beige and cream and applied these effects of color to many versions of his old ceramic portraits and a repertoire, ever more important animals and fantastic masks inspired by Gothic sculpture and Japanese art. It was through these last two influences that the extreme realism of Carriès led to distortion, caricature and finally to the grotesque. Inspired by symbolism, he resorted more and more to the "cut head" subject. In 1889, he organized with success his first exhibition of sandstone ware in his studio in Paris.

Around 1890, Princess Louis de Scey-Montbéliard, future Princess Edmond de Polignac, commissioned him, from a drawing by Eugène Grasset, a friend of the artist, a monumental door designed to create a room in her new Parisian mansion, located rue Cortambert, where was kept the manuscript of Richard Wagner's "Parsifal". Designed in enamelled sandstone, the model weighs no less than 22 tons and must have 600 glazed stoneware tiles. This porch should also have measured 6 meters high and would have separated the room dedicated to the manuscript hall in which she received music lovers and organized private concerts. This crushing work used the forces of Carriès and remained unfinished. In 1892, Carriès exhibited 130 pieces, some of which were taken from the Porte de Parsifal at the Salon of the National Society of Fine Arts and earned praise. This earned him the title of Knight of the Légion of Honor. For more than thirty years the original life-size cast of "La Porte de Parsifal" was exhibited in Paris at the Petit Palais, at the entrance of a room dedicated to the work of Carriès. In 1934, because of a decision of Raymond Escholier, then director of the museum, the model was dismantled and destroyed in 1950 and the hall devoted to Carries dismantled as well.