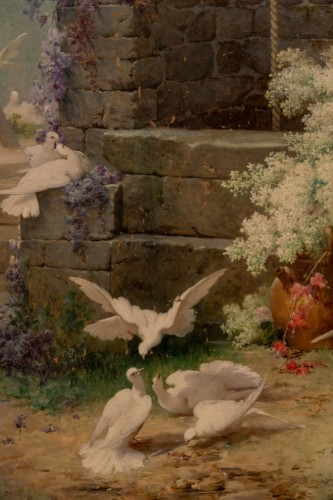 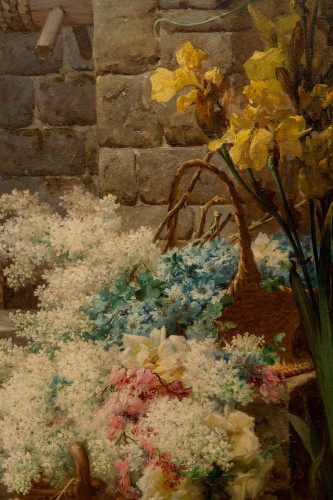 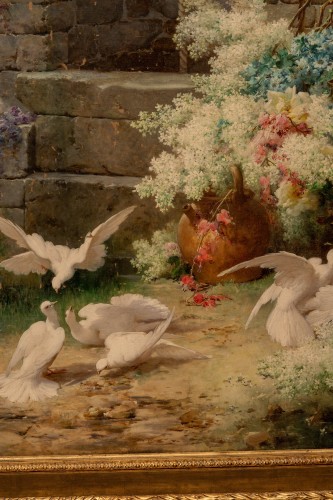 With its abundance of pink cherry blossom, purple wisteria, yellow flags and other brightly coloured spring flowers, this beautiful painting epitomises spring or printemps when pairs of white doves busily prepare for the nesting season. The old brick well, the wooden fencing and stone steps to the left leading to another corner of the garden provide a perfect setting for this fresh and sun-filled scene that is not only described with great mastery but brings joy to its viewers. It was painted by Eugène Bidau and dated 1896, may well be his oil titled Le Printemps which he exhibited that year at the Paris Salon. Princicapally known for his still lifes - usually of flowers and birds as well as for his genre scenes, this work combines both subjects in one. In addition, Bidau also executed a number of religious works as well as large scale decorative designs, some of which were subsequently made into tapestries.

Bidau was born on the 27th December 1839 at La Roche-sur-Yon, Vendée in the Pays de la Loire region in western France. He studied under Baptiste-Joseph Lechat (d. 1890) and the portrait and genre artist Léon-Désiré Alexandre (1817-86), both of whom exhibited at the Salon des Artistes Français in Paris. Bidau then made his own debut at the Salon in 1863 and continued to exhibit there for many years, showing for instance floral pieces in 1864 and 1865 and then a work titled Le panier renversé; fleurs et fruits in 1867. Bidau also participated in a number of diverse collective exhibitions, for instance in Nantes in 1872 when he exhibited L’hiver and Fleurs. Later in 1894 he showed Fleurs et bijoux as well as Un panneau décoratif floral at the Salon des Amis des Arts and at the same venue the following year Les deux coqs (from la Fontaine’s fable) and Les martyrs des champs, showing flowers, butterflies and birds; these were followed in 1896 by Nature morte aux roses and Les petits martyrs des champs (1896). Other of his works were shown at the Palais du Cours Saint-André including Devant la laiterie, Fleurs et bijoux as well as a religious scene of Christ titled Pensez à moi.

Such was his repute that he won numerous awards, especially in the provinces, including Montpellier (1868), Amiens (1870), a second class medal in Angers (1877), Nice (1890), and a gold medal in Angers in 1895. Also known for his talent as a decorator, Eugène Bidau participated in the decoration of the Hôtel de Ville in Paris. In addition he executed three decorative panels for the Palais de Justice in Rennes (1897), which were subsequently woven as tapestries by the Gobelins Factory specifically for the Exposition Universelle of 1900. In June and July that same year the Galerie Georges Petit held a retrospective exhibition of Bidau’s paintings, following his death in Paris in December 1899. Bidau spent most of his career living in Paris, firstly in rue de Buisson-Saint-Louis but for the most part in rue Rébeval. He was buried in Paris in the Cimetière du Père Lachaise, Ile-de-France where a bronze bust of him by Mathurin Moreau sits upon his monument. Boudin’s likeness was also captured by Jean-Alexandre Coraboeuf (1870-1947) who had been encouraged by Bidau to study at the École des Beaux Arts in Paris and in 1900 exhibited a design showing a portrait of his recently deceased friend.