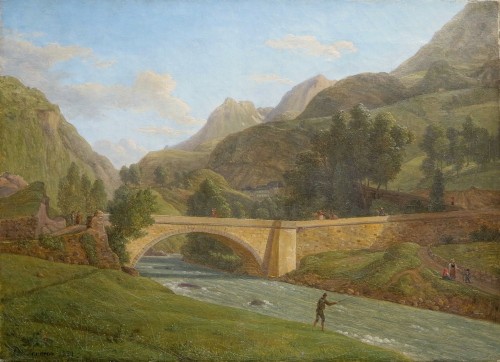 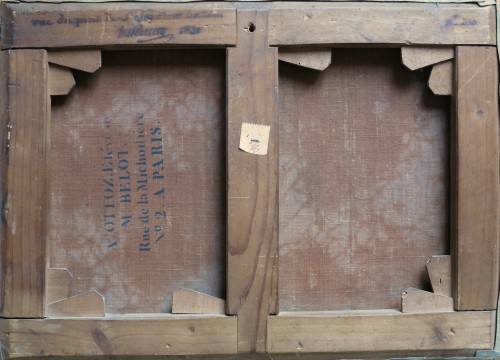 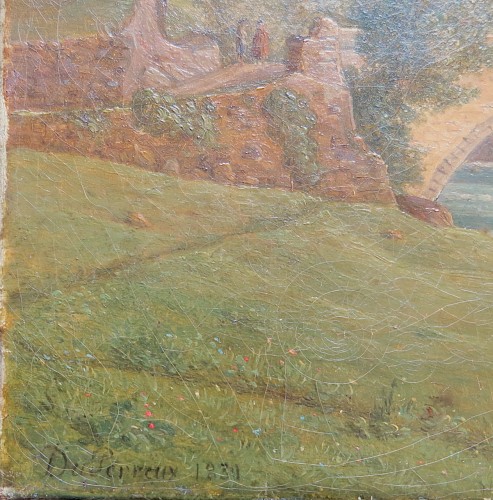 View of the bridge of Saint Sauveur-les-Bains, Pyrénées

Oil on canvas
Signed and dated 1831 on the lower left
Titled, dated and countersigned on the chassis reverse
25.5 x 35.5 cm

Robert MILLIN, financier and secretary of the king, bought the land and the seigniory of PERREUX in 1760 and decided to build a new castle by calling on an architect of the king, Etienne-Louis BOULLEE . This castle will be shot down around 1895 but a wing remains still present in Perreux-sur-Marne in the district of the Park, rue du Docteur Faugeroux. The revolution did not spare the PERREUX since his last lord, Jérôme Robert MILLIN du PERREUX (1733 - 1794), financier and director of the royal lottery was guillotined in 1794 by order of Fouquier-Tinville.
His son, Alexandre Louis Robert MILLIN du PERREUX, was forced to return with his brother the estate in a sad state under the Directoire, but they would soon sell it.
Alexandre Louis Robert MILLIN du PERREUX was a pupil of Jean-François HUET and Henri de VALENCIENNES. He traveled to Switzerland, Italy and Spain, and then spent seven years in the Pyrenees. He exhibited at the Salon de Paris from 1793 to 1822. He was highly appreciated by the Empress Josephine, protected by the Bourbons.
He was appointed a member of the Arts Commission and obtained the Legion d'Honneur in 1806.
Some of the characters who animate his landscapes attributed to his painter friend Jean-Louis DEMARNE.
MILLIN du PERREUX offers here one of his illustrations characteristic of the Pyrenees, representing the bridge linking Pierrefitte (currently Pierrefitte-Nestalas) to the village of Saint-Sauveur (currently Luz-Saint-Sauveur). Originally built in 1736 and then swept away by a flood of the Gave in September 1751, the bridge was later rebuilt as represented by MILLIN of PERREUX in 1831. Nowadays, it is called Pont de Pescadère, from 1901 it was doubled by a tram line linking Pierrefitte-Nestalas and Luz-Saint-Sauveur active until 1939. To this day, stands a modern bridge.
You can see fairly easily by transparency in the sky of the composition the placing under the underlying of the artist. MILLIN du PERREUX most likely took the preparatory drawing in situ and then produced the final painting in his workshop. 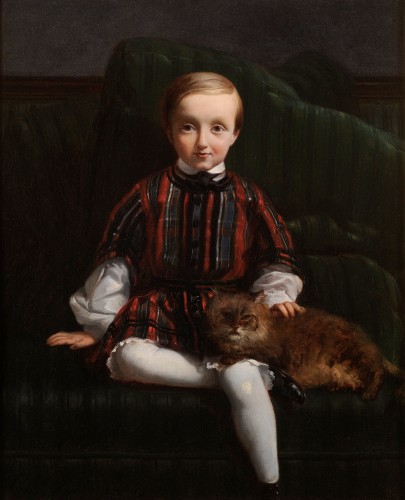