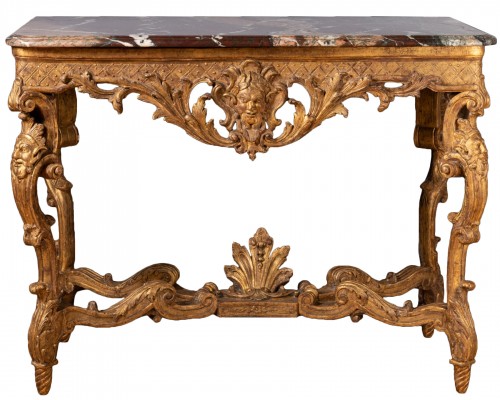 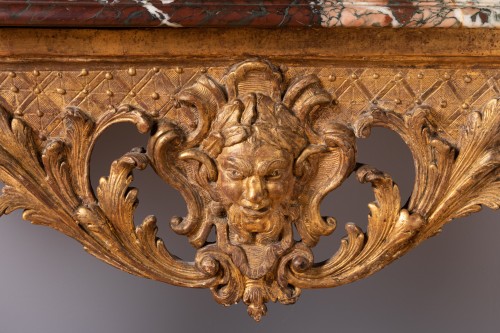 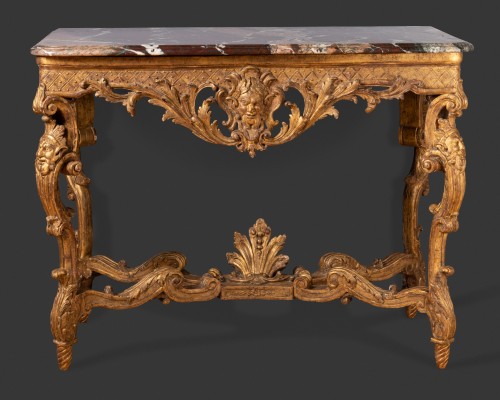 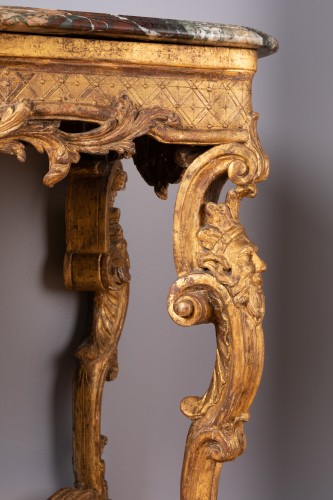 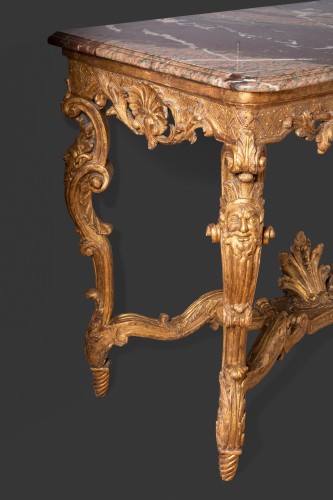 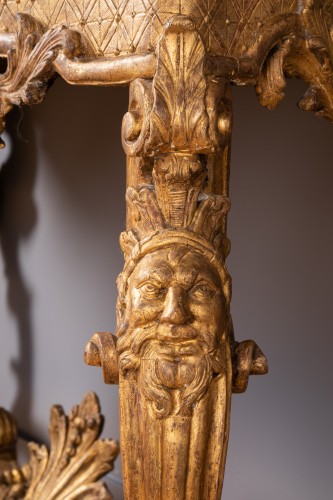 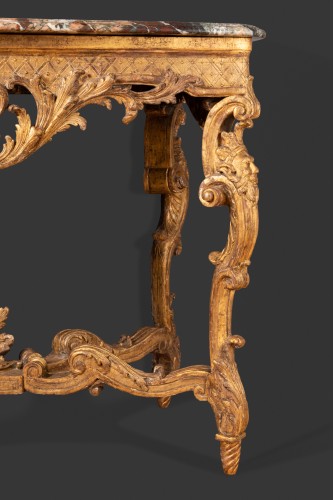 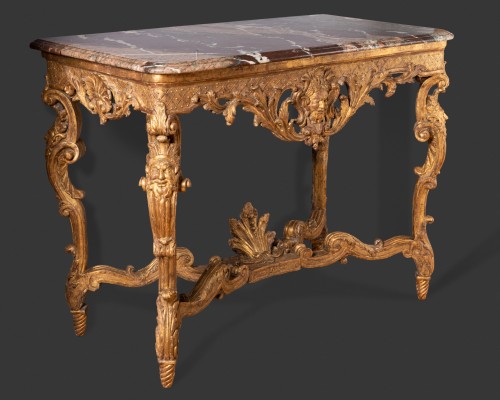 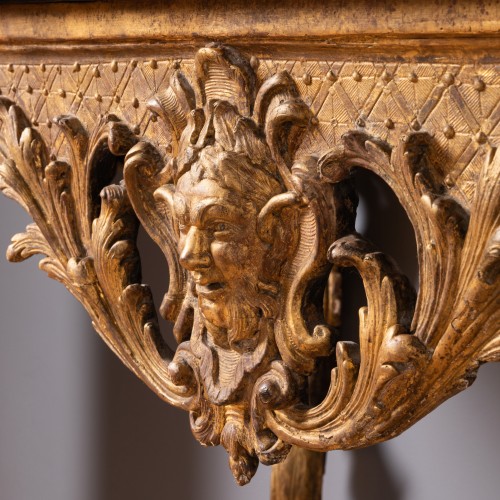 The scalloped crosspieces are embellished with openwork acanthus foliage on a lattice background delicately engraved in plaster.

They are centered with shells on the sides and a grimacing faun mascaron on the front.

The legs in double conjoined consoles are decorated with heads of bearded Indians and rolled acanthus in the lower part.

They are terminated by spiraled legs and are linked together by a double-evolution "X" spacer, presenting a stylized acanthus in its center.

Parisian work from the end of the Louis XIV period, around 1710.

The exceptional console that we present features a very rich sculpture, of high quality, while maintaining a pure and airy line.

If the decorative repertoire is still in the Louis XIV style and "Boullesque" inspiration with its winding spinning top feet and its masks of grimacing fauns and Indians, the delicacy of the engraved lattice and the fretwork of the crosspieces announce the end of the reign of the great king and the rise of the Regency.

Such a console is the fruit of concerted work between several great craftsmen, including a draftsman, an ornamentalist, a sculptor and a gilder.

The oak wood used, which allows us to present it in perfect condition and in its old gilding, allows us to locate it in Paris in the workshop of one of the great creators of the time: Desgoullons, Legoupil, Taupin, Bellan, Roumier...The drawings of "consoles and mascarons for frame borders, wall brackets and table legs" by Mathieu Legoupil, kept in the Berlin library from 1725/1735 (folio 28-29-30) offer about fifteen men's mascarons with various expressions and heads of Mercury, Bacchus, Chronos, Saturn... intended to adorn building pediments, woodwork and consoles. Legoupil worked at the Petits Cabinets du Roi at Versailles in 1692, then at the Château de Meudon in 1695 with Jules Desgoullons, Marin Bellan, Pierre Taupin. On January 21, 1699, they set up a society for nine years for the buildings of the King and the princes of the blood, and were entrusted with the sculptures of the exterior stones, the cornices, the paneling of the Small Cabinets, the Menagerie, the Trianon and the Cabinet of the Grand Dauphin in Meudon. In 1700, Legoupil and Desgoullons founded a company for work intended for individuals, a company extended to Bellan and Taupin in 1702, which they then continued regularly until 1739, the date of the death of the last of them. They then adorned a certain number of religious buildings, the Palais Bourbon, the Château de Sceaux, of the Marquis de Lavallière, of the Duke and Duchess of Orléans, of the Marshal d'Estrées, a certain number of mansions of the place Vendôme in creation, creating their paneling, their woodwork and a certain number of consoles : Marly "eight table legs", Meudon "two table legs", a table leg for the Marquise de Beaumanoir, eleven table legs for the Duc d'Antin, two table legs for the Duchess of Orléans….

Bruno Pons, From Paris to Versailles, 1699-1736: Parisian ornamental sculptors and the decorative arts of the King's Buildings, Strasbourg, 1986. 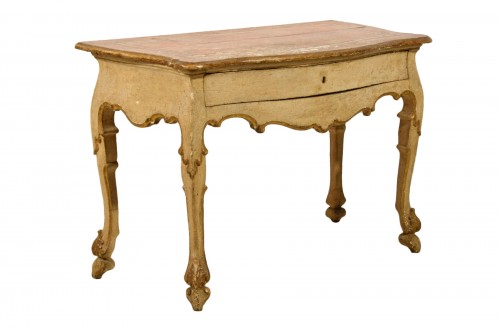 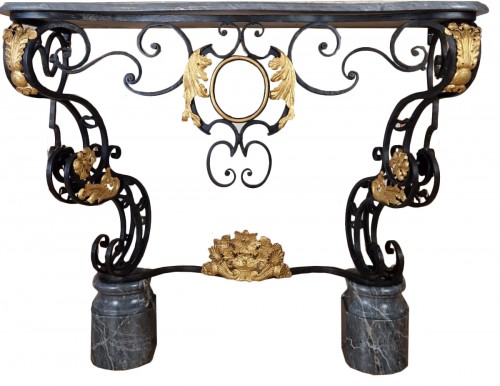 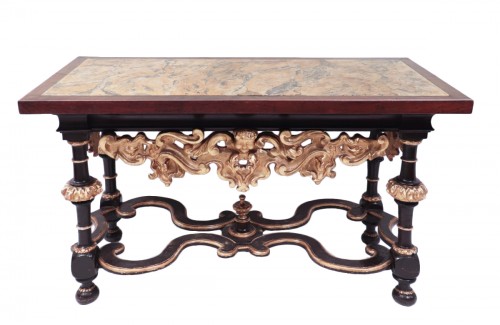 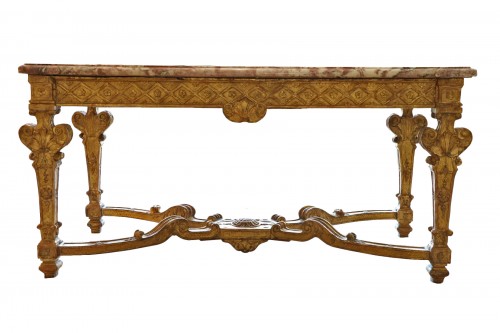 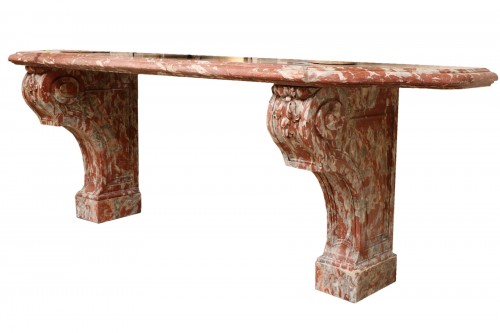