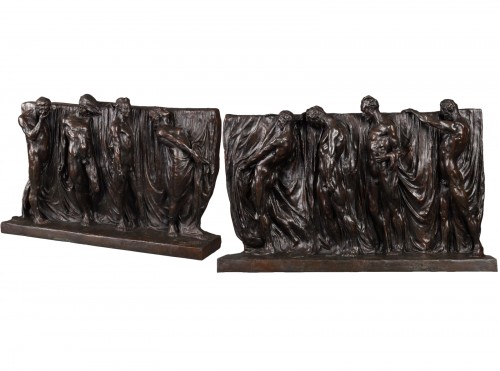 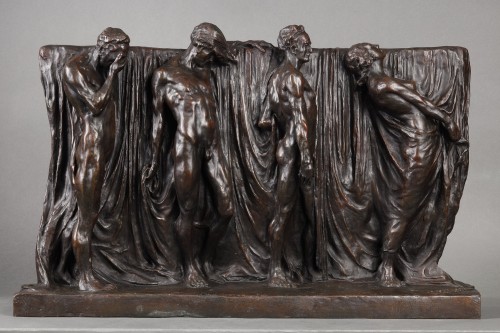 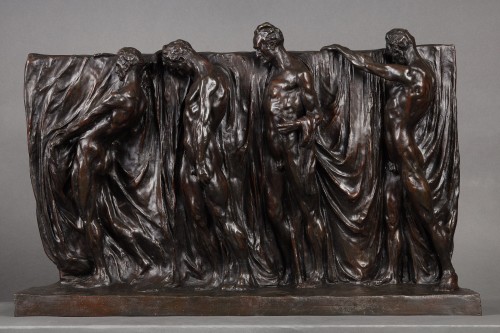 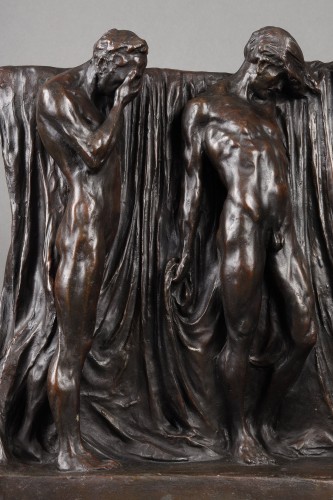 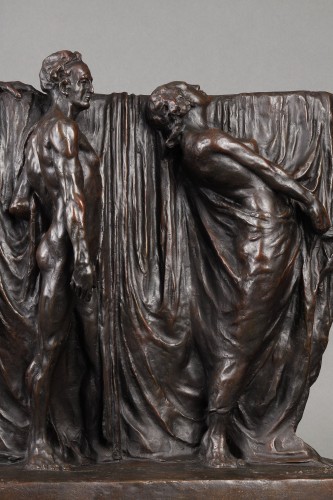 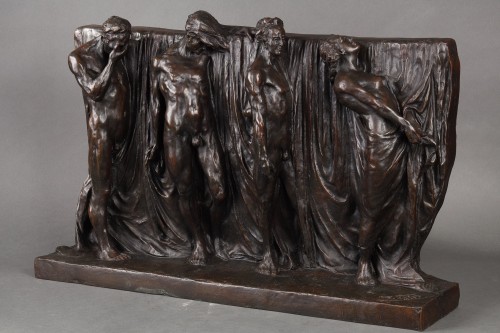 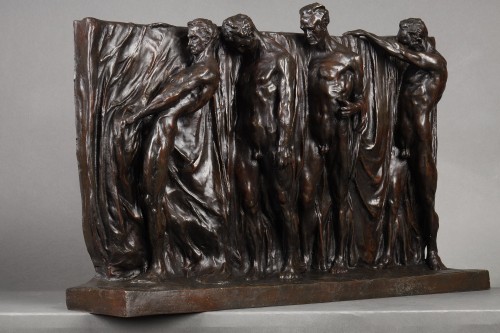 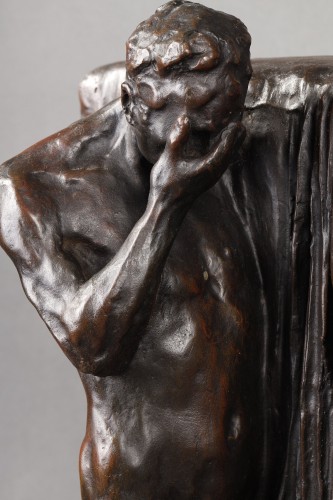 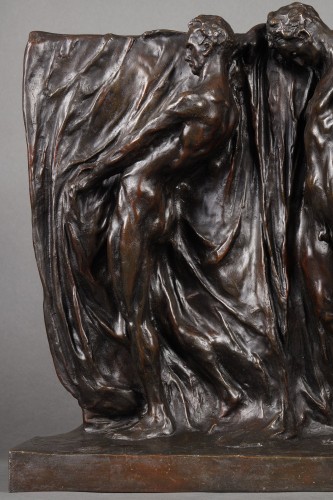 Following the sixth centenary of the death of Dante in 1921, who had become an emblematic Italian figure, the Italian State commissioned Alfred Pina to create the Tomb of Dante, which would be his major work, unfortunately destroyed during the Second World War.

Pina executed in 1923 the group of "Humanity bearing the remains of Dante", the central element of the future monument, the bronze model of which was presented in Paris at the Salon d'Automne in 1925. The original project, conceived as a mausoleum, presented two rows of men carrying on their shoulders the draped stretcher on which rests the recumbent figure of the poet Dante.

Auguste Rodin had noticed Pina's talent and in 1913 offered him to join his studio. Pina remained there until the death of the master in 1917. As a faithful epigone of the Rodinian language, his monument to Dante Alighieri is to be compared to the famous Rodin's "Gate of Hell". Like that of his master, this work, considered Pina's masterpiece, has never been inaugurated. This monument is only known thanks to a wax model kept at the museum of La Charité-sur-Loire.

Biography :
Alfred Pina (1887-1966) was a French sculptor of Italian origin. In 1904, he was awarded the National Grand Prize for Italian Sculpture at the Brera Academy of Fine Arts in Milan, where Pina attended Professor Broggi's Artistic Anatomy course. He went to Bologna, then to Rome. The attendance of French artists made him want to know Paris where he arrived in 1911. Alfred Pina then rented the orangery at the Imbergères castle in Sceaux and exhibited at the Salon of French artists from 1911 to 1914. He received many orders busts , and tried to engrave on wood. After the declaration of the First World War, Alfred Pina exiled in Montpellier, whose museum acquired a Bust of Beethoven.

The war ended, Alfred Pina returned to Paris and settled in Montparnasse, where he rented a workshop rue du Maine, adjacent to that of Antoine Bourdelle. The retrospective exhibition of his works at the Allard Gallery in 1920 was a great success. In the early twenties, Alfred Pina moved to the Nièvre. He acquired a stone quarry at Malvaux which served him to honor his many orders for war memorials. Devoid of business acumen, he bought with the sale of the quarry a farm of thirty hectares in Mesves-sur-Loire. "More adept at modeling the earth than turning it over," he returned to Paris, leaving his farm to the care of a friend. He found his Italian friends, the painters Arduino Colato, Varèse and Sili Prandi, the Swiss sculptor Wegener, the engraver Rappa. A universal contest launched by Benito Mussolini designated him for the project of the tomb of Dante which was his masterpiece. He went back to Rome. When he returned to France in 1929, he organized an exhibition of Italian artists from the capital, at the Cercle de la rue Boissy d'Anglas. The bronzes from Dante's tomb were sent to cast iron during the Second World War. Alfred Pina settled in Mesves-sur-Loire and obtained French nationality. He exhibited in Nevers and Vezelay, where he participated in an exhibition of religious art. 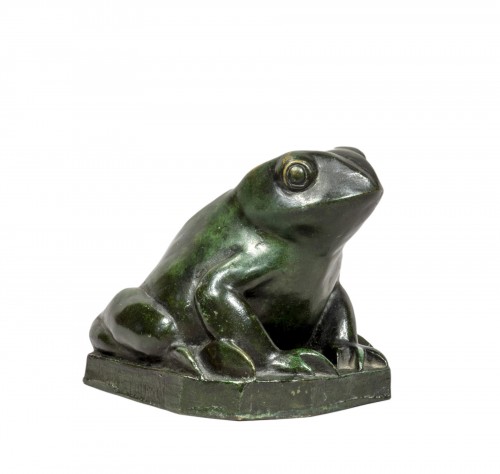 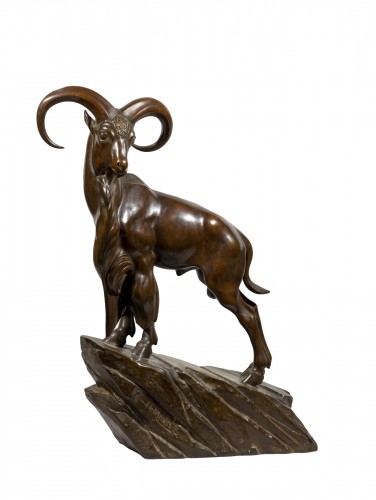 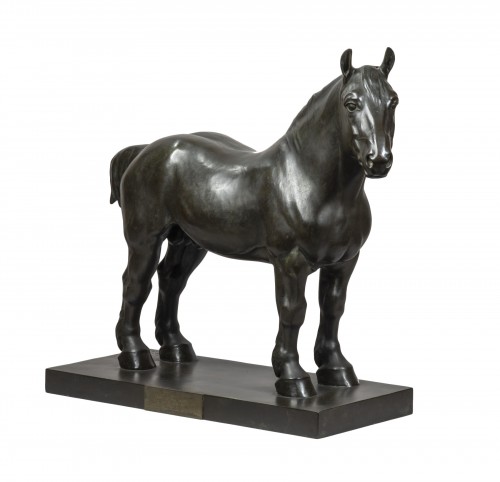 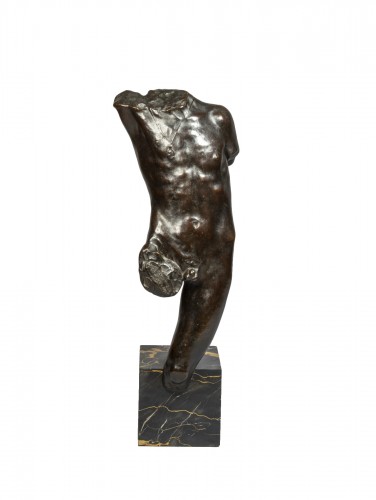 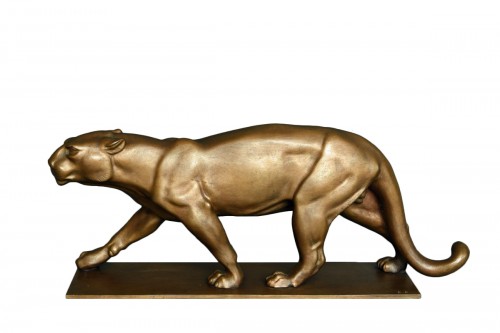