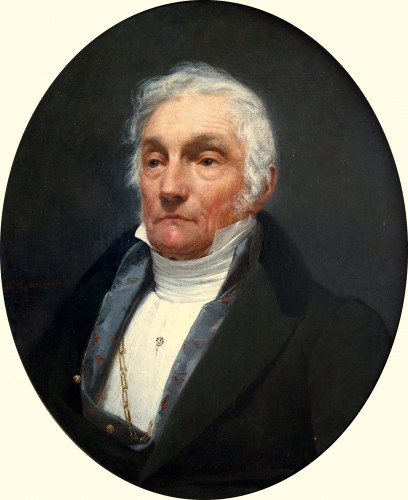 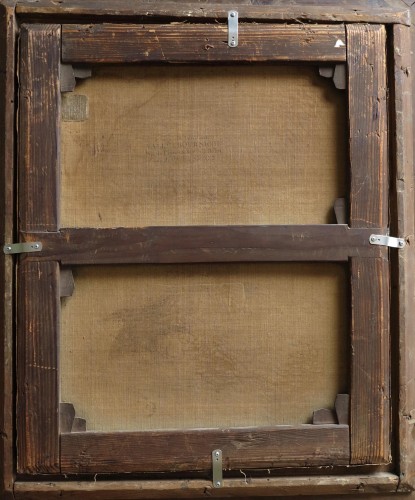 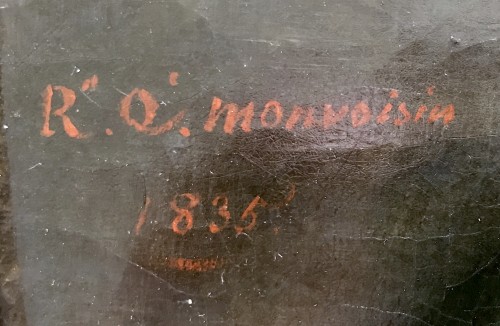 Portrait of a man

Monvoisin is an interesting painter but quite unknown in France, unlike Latin America (especially Chile) where he spent fifteen years and where he is considered as a major artist.

Trained in Bordeaux by Pierre Lacour for several years, Monvoisin went to perfect in the studio of Pierre-Narcisse Guérin at the Beaux-Arts in Paris, he joined in 1816. It is a student laborious and obstinate, even hard at work , who will win several internal competitions at the school and will participate almost every year in the Grand Prix de Rome of painting. Having finally obtained the second place in 1820, and a third place in 1821, it is thanks to the recommendation of Gerard and the support of Louis XVIII (which he had painted a portrait in 1820) that the State grants him a pension to study in Rome. There he met Domenica Festa, and married there in 1825, just before the young couple returned to Paris.
He then knows a certain success and develops his clientele, which includes for example the Duke of Orleans, who buys several paintings thematic mythological or Italian. At the height of his career in the early 1830s, Monvoisin specializes in history painting and receives commissions from the state, especially for the historic gallery of Versailles, and around 1840 he starts producing a few genre paintings, while regularly performing many portraits.
Yet despite his fame (first class medal at the Salon of 1831, Legion of Honor ...), he has problems with health and marriage, and especially a quarrel since 1835 with Cailleux, secretary general of the Royal Museums; all this decided him in 1842 to respond favorably to the solicitations (which dated back to 1838) of Chilean intellectuals and diplomats, whom he had been close to for fifteen years, who offered him to come and found a school of painting in Chile.
He then spent fourteen years in South America, mainly in Chile, with the exception of two interludes in Peru in 1845, where he founded a school of painting in Lima, and in 1847; he also stayed 3 months in Argentina when he arrived on the continent late 1842, and several months in Brazil, returning from a short trip to France in the summer of 1847, where he will be decorated by the Emperor Pedro II. Considered a forerunner of the Fine Arts in Chile, he trained many students there, and would have painted more than 500 paintings; today there are about 300 paintings in Chile (70 in public collections), 65 in Argentina, 18 in Peru and 8 in Brazil.
Monvoisin returned to France at the end of 1857; now a forgotten painter, he devoted himself to paintings with South American themes (landscapes, portraits) which he exhibited at the Salon and were reproduced in engraving by the publisher Goupil.
The last years of his life, spent in Boulogne sur Seine, took place under the sign of spiritualism and interest in homeopathic medicine. 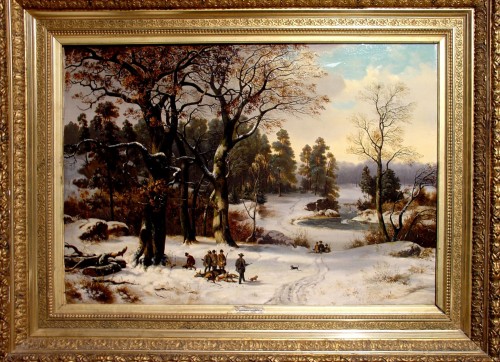