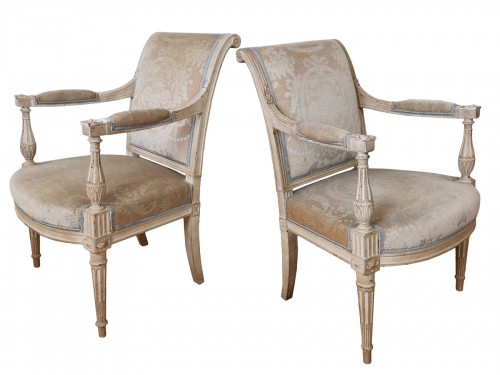 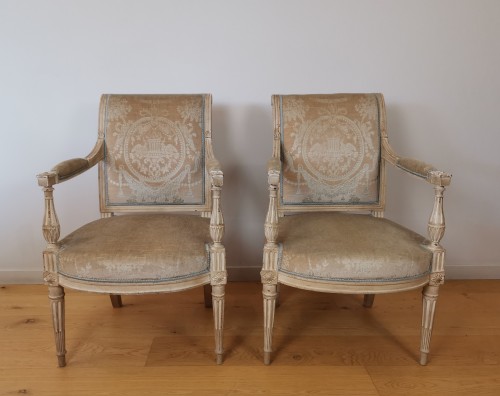 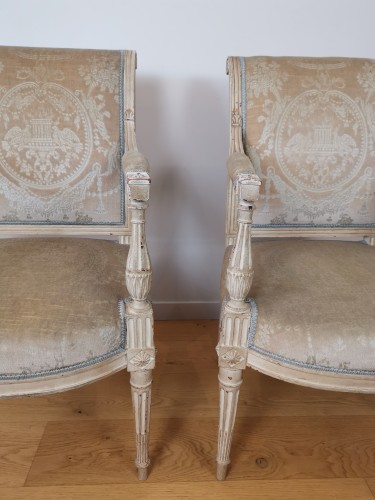 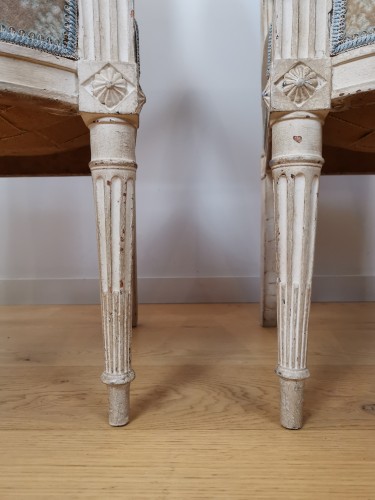 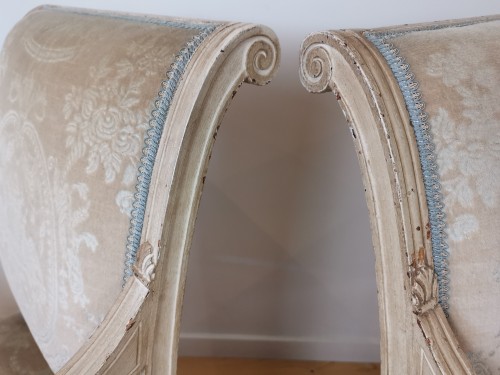 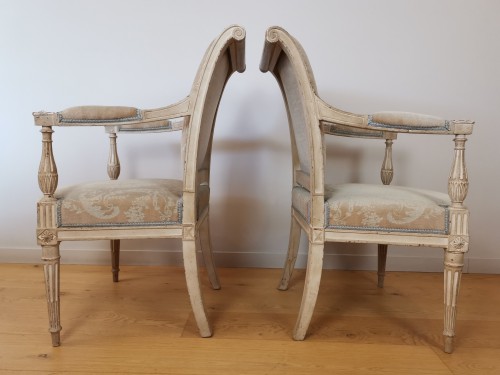 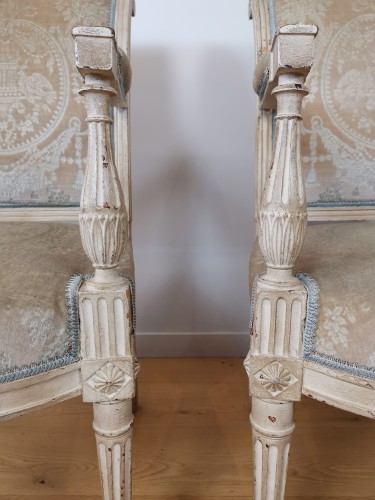 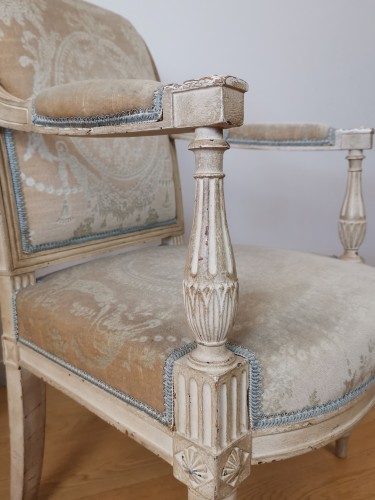 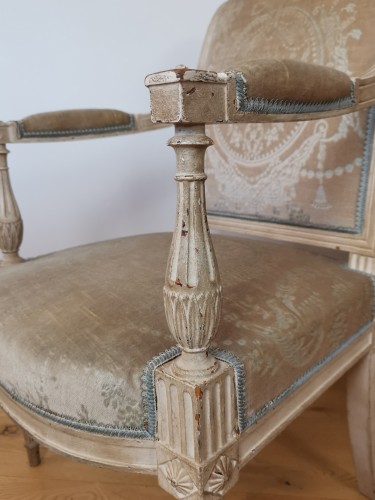 Pair of armchairs with flat back, square rolled in carved beech wood, molded and lacquered Louis XVI period. Their back of square shape with rolled top is traversed of broad moldings to the infinite; where come very high to embrace the armrests. These provided with cuffs come to pose their nose in cavet on swollen fluted balusters raised by foliage in the plumb of the front foot. This one tapered, fluted and vertical is joined to the baluster by a high stop vertically fluted top of rosettes. The very pronounced scroll of the backrest and the saber-shaped rear foot form an arch composed of two sections. The one devoted to the backrest is tapered in the middle part to the crossbar, then the second one, devoid of any asperities, is as smooth as tapered. This pair of armchairs from the last days of the monarchy present several new clues in their design. In addition to the rolled square back, two innovations, although minor, modify in this model the classical physiognomy of the so-called Greek seat to give way from 1788 to a new aesthetic in the Etruscan style. The most apparent one consists in the slight inflection that Roussens gives to the profile of its back; the other one, in the frankly arched shape of the naked posterior feet with square section, contrary to the tapered, fluted and vertical anterior feet. It is noticeable that the rosettes of the connecting stops and of the cavets are carved in the mass but not just glued; an economical process frequently used at the end of the 18th century. The architectural characteristics of this elegant pair of seats, its rolled back, its embraced armrests, its supports in cavet stopped by a stop and even its posterior feet in saber fix their dating in the last years of the monarchy about 1788-1791. The stamp of Roussens is stamped on the edge of the back rail of each of the seats. Balance, responsiveness, elegance and quality are the most appropriate terms for this beautiful pair of seats. It should be noted the great care taken to the linking elements of impeccable quality. The upholstery and trim have been the subject of a total restoration very ressente, the cover is in off-white Mohair velvet. Roussens, a carpenter established in Toulouse, was received as master on February 7, 1784. If Paris has always been the capital of Art, if most of the famous French artists and craftsmen were born there, or have lived there for a large part of their lives, the province also gave birth to men of taste, some of whom have passed to posterity, following the example of the Cressents, the Migeons, the Jacobs and many others. Such was the case, when, from the end of the 17th century until the beginning of the 19th, the family of carpenters in seats Roussens illustrated Toulouse, as the Hache in Grenoble or the Pillot in Nimes.
Dimensions:
Bibliography, French furniture; "the seats" by Guillaume Janneau at Jacques Fréal editions. 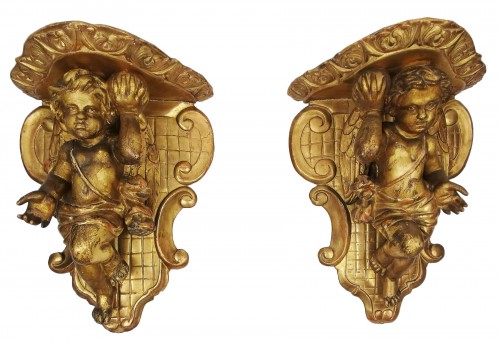 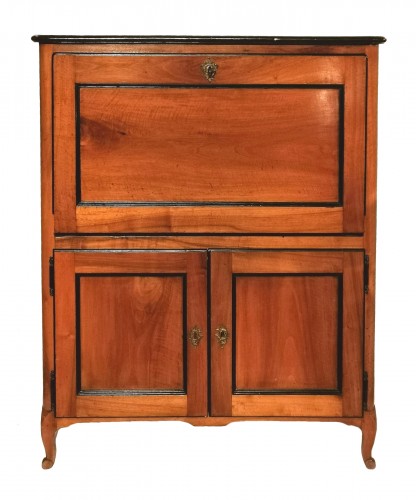 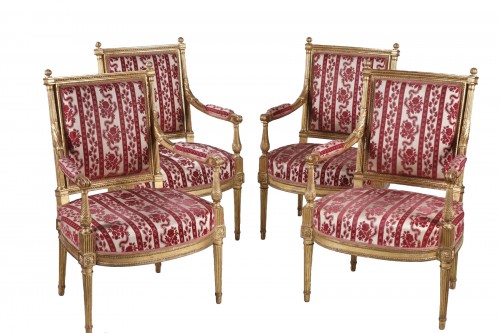 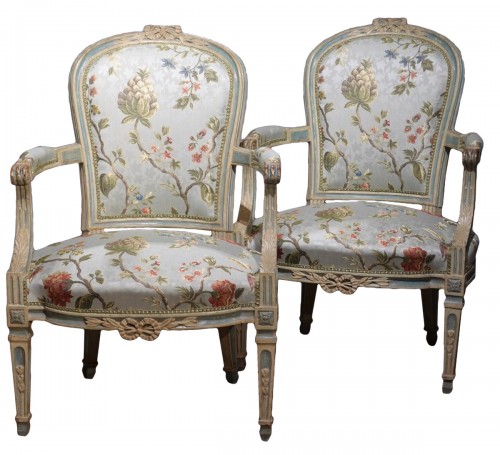 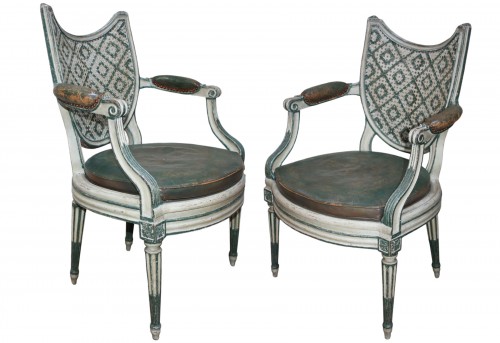 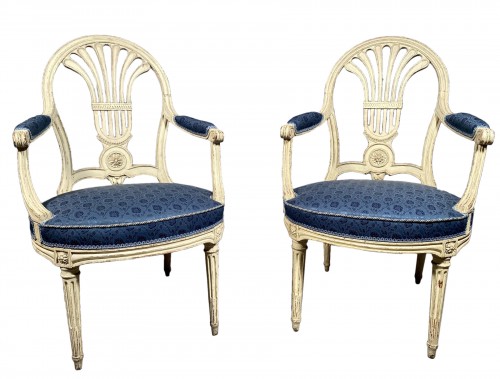 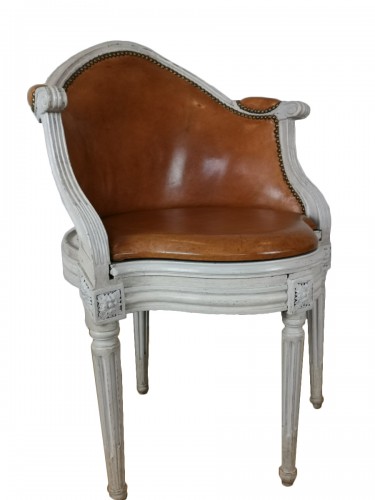