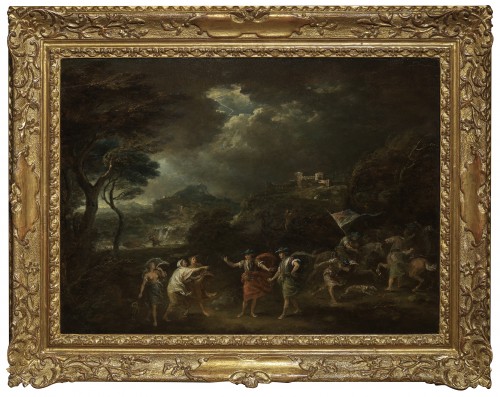 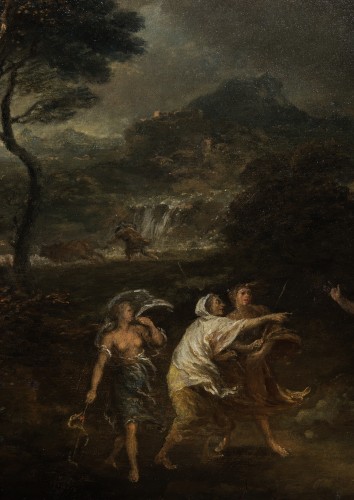 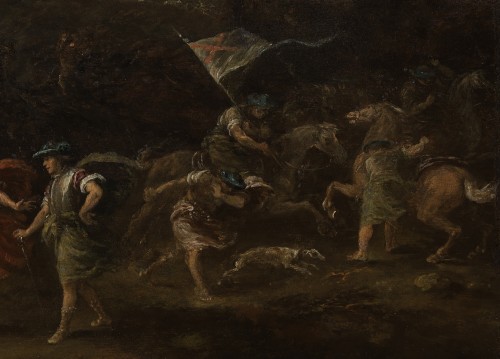 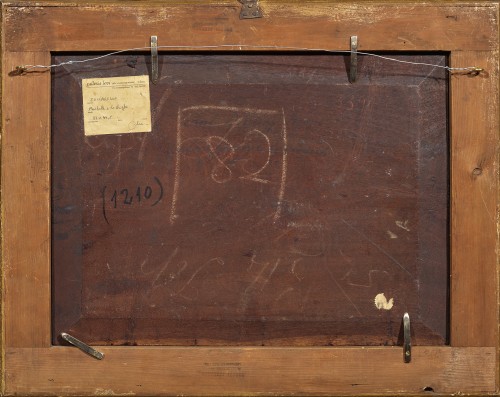 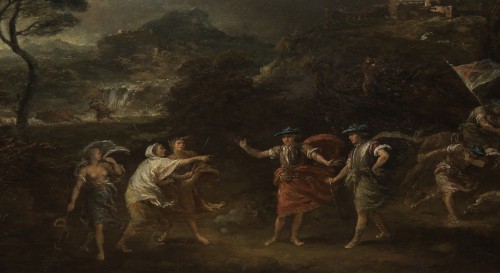 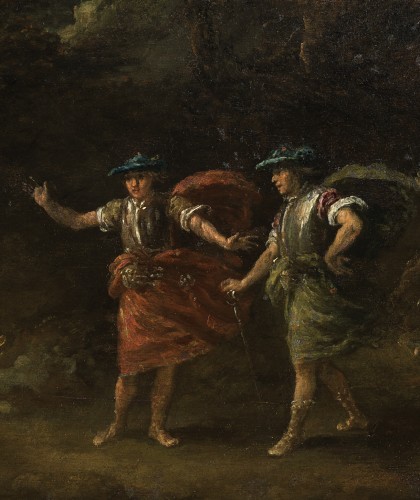 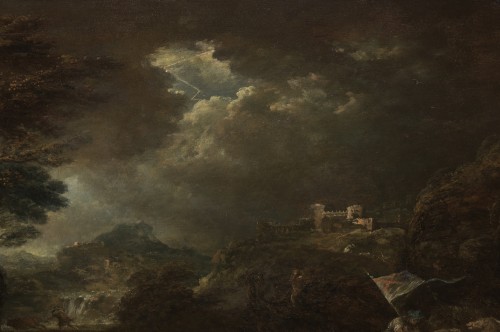 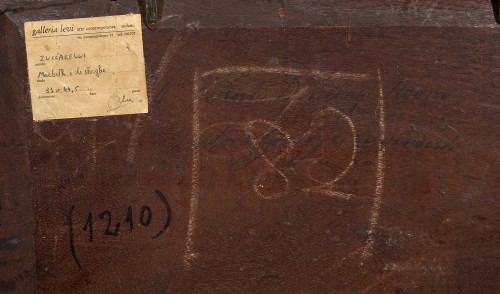 This painting, created during Zuccarelli's stay in England, represents the decisive moment when Macbeth, together with Banquo, meets the three witches who announce that he will be King. As the first European painting depicting theatrical characters in a landscape, it is an important testimony to a great artistic and literary current: the beginnings of the Neo-Gothic under the influence of the theory of the sublime.

The third of four brothers, Francesco Zuccarelli was born in Pitigliano in southern Tuscany in 1702. His father was from a prosperous family and owned several vineyards and a commerce in cooking utensils and spices near Pisa.

He began his apprenticeship in Rome in the studio of the portraitist Giovanni Maria Morandi (1622 - 1717) and his pupil Pietro Nelli (1672 - 1740), and there he discovered the works of the landscape painters of the preceding century, in particular the work of Claude Gellée known as Le Lorrain (1600 or 1604 - 1682) which would have a major influence on his paintings. After a stay in Florence, it was in Venice, where he arrived in 1732, that he fully devoted himself to landscape painting and joined forces with the painters Bernardo Bellotto and Antonio Visentini. In 1736 he was admitted to the Fraglia dei Pittori, the painters' guild, and in 1736 he enjoyed the patronage of the Marshal von der Schulenburg, the English Consul Joseph Smith and Francesco Algarotti, who recommended him to the Elector of Saxony, Augustus III.

Richard Dalton, the Royal Librarian and Consul Smith persuaded Zuccarelli to travel to England in 1752 following Canaletto. In London, Zuccarelli reached the peak of his art and became friends with members of the English aristocracy, who were particularly sensitive to the Arcadian landscape representations in which Zuccarelli excelled.

He became a member of the Society of the Dilettantes in 1757, and it was in 1760, probably under the influence of the actor David Garrick's interpretation of Macbeth that he completed our painting inspired by scene 3 of Act I where Macbeth meets the three witches with Banquo.

This first English visit, which ended in 1762 with his return to Venice, was followed by a second journey between 1765 and 1771. Zuccarelli finally returned to Venice in 1771 as Director and then President of the Academy of Fine Arts and died in Florence in 1778.

2. The story of Macbeth and description of the painting

Our painting illustrates the crucial moment when Macbeth, represented on the right, leaning on his sword, motionless and imperturbable, accompanied by his friend Banquo, meets the three witches who predict that he will be Lord of Cawdor and King of Scotland.

Devoured by ambition after the fulfilment of this first prophecy, Macbeth, under the influence of his wife, decides to kill King Duncan who is visiting him, and accuses Duncan's sons of the murder. Having become king, Macbeth is racked with guilt and decides to murder all those who become suspicious, starting with Banquo.

The witches reappear and tell him that he will be safe as long as the Birnam forest does not reach his castle at Dunsinane and that only a man not born from a woman can kill him. As the first prophecy is fulfilled, Lady Macbeth, inhabited by remorse, commits suicide. Macbeth marches towards the enemy believing himself invincible before being killed in a duel by Macduff, born by Caesarean section.

In our painting, the group formed by Macbeth, Banquo and the three witches unfolds like an antique frieze in the foreground, while a battle scene in the background on the right evokes the world of noise and fury in which the tragedy is taking place. In a night suddenly lit by a flash of lightning, the witch in white stands out like a ghost, clothes fly in the wind, a horse rears up in battle. The dark sky above the mountains is a metaphorical representation of death lurking around the king, around Macbeth, around every man confronted with his own destiny.

3. Macbeth: neo-gothic taste and theory of the sublime

Michel Levey, in his study devoted to Zuccarelli's British sojourns, underlines the specificity of our painting in the painter's work: an unicum introducing a subject taken from Shakespeare's tragedy within a compositional landscape. This would be the first example in European painting of a representation of a subject taken from a play in a landscape.
The rediscovery of Shakespeare's plays in the mid-eighteenth century in England owes much to the actor David Garrick (1717 - 1779) who made the role of Macbeth, first performed on January 7, 1744 when he was 27 years old, one of his leading roles. Garrick's influence was decisive in finding a way back to the original Shakespearean text preceding the adaptation of the play by D'Avenant, which had been performed until then, and in abandoning contemporary costumes for medieval ones - costumes which are undoubtedly represented in our painting.

In this respect it is interesting to note that the two main characters, Macbeth and Banquo, are dressed in kilts. The wearing of kilts had been banned in Scotland following the Battle of Culloden (16 April 1746) during which the English army, commanded by the Duke of Cumberland, defeated the army of Charles-Edward Stuart (Bonnie Prince Charles). The reintroduction of this traditional attire in our painting probably constitutes a "picturesque" element evoking both the medieval period (as an attribute of an organic society that is disappearing under the pressure of the Enlightenment) but also the exoticism of Scotland.

This rediscovery of the Elizabethan theatre is part of a wider Zeitgeist of rediscovering the arts of the Middle Ages (which will be translated into architecture by the first neo-gothic constructions, the most emblematic of which - Strawberry Hill - was built by Horace Walpole between 1749 and 1776).

The neo-gothic sensibility is fully in line with contemporary philosophical reflections, as expressed in Edmund Burke's 1757 book A Philosophical Enquiry into the Origin of Our Ideas of the Sublime and Beautiful.

This theory of the sublime opposes the sublime with beauty as two exclusive concepts (like light with darkness) while recognising that both can provide pleasure. Sublimity may evoke horror, but the knowledge that the perception is a fiction can be pleasureful. In contrast to classical thinking, Burke argues that ugliness has aesthetic value because of its ability to generate intense emotions, and thereby generate pleasure. Burke also analyses the physiological effects of the sublime, in particular the fear and attraction we may feel when faced with the sublime, which reveals our human finiteness in the face of the grandeur of a nature that surpasses us. This delight that comes from contemplating the sublime is felt even more strongly than the pleasure that comes from contemplating beauty.

in our panel we can find a certain number of elements which take on a particular resonance if we analyse them through the prism of the sublime: the repulsive and abject ugliness of the three witches (one of whom holds a stick around which a snake is wrapped); the grandeur of nature (mountains, waterfall) as the lightning of thunder crosses the sky, and finally the loneliness of the hero Macbeth in the face of the threatening destiny he forsees.

4. The different versions of the work

This painting was certainly very much appreciated by the English public, as shown by the fact that there are several versions of it:
• A large pencil sketch is exhibited at Stourhead today;
• A version on canvas, very close to ours and bearing the artist's signature, completed in 1760 was used as a model for William Woollett's engraving in 1770 when the painting was in William Lock's collection; this painting could be the one sold on July 14, 1952 by Christie's (lot 52);
• Another version was signaled at public auction as early as 1761 and came from the collections of Sir William Hamilton; this version was probably resold in 1783, this time on behalf of Charles Hamilton;
• A third panel version is documented in the collections of Grosvernor House in 1821 and was sold by the Duke of Westminster in 1925; this version measuring 81.7 x 147.2 cm is now in the Folger Shakespeare Library in Washington ;
• At least three other versions true to Woollett's engraving exist: one in the Shakespeare Memorial Gallery in Stratford; another in the collections of the Marquis Gondi in Florence; and a third (reproduced by Federica Spadotto) in a private collection.

An inscription on the back of our sign "Ante Dineing Room - Lord George Cavendish" tells us the name of the first or one of the very first owners of our panel. In the absence of any further information on the sale of this panel or of any inventory it could have belonged to either :
• Lord George Augustus Cavendish (c. ?1727 - 1794). Born in London he was the second son of William Cavendish, the third Duke of Devonshire and his wife Catherine Hoskins. A godson of King George II, he inherited Holker Hall (then in Lancashire, now in Cumbria) in 1753 and replanted its grounds. He became a Member of Parliament in 1751 until his death in 1794; or to his nephew
• George Augustus Henry Cavendish (1754 - 1834), known as Lord George Cavendish until 1831 and then as the Earl of Burlington. Third son of the fourth Duke of Devonshire and his wife Lady Charlotte Boyle, the sole heir to Richard Boyle the third Earl of Burlington, he was also a Member of Parliament from 1775 to 1831. He was the builder of the Burlington Arcade at Piccadilly alongside Burlington House which was purchased from his nephew, the sixth Duke of Devonshire in 1815.

This panel was then exhibited at the Galleria Levi in Milan as part of the exhibition '700 Veneto - paesaggi e Vedute' in November 1967 before joining a private Italian collection.

6. Conclusion: our opinion on the work

All hail, Macbeth ! that shalt be king hereafter. (Shakespeare - Macbeth scène 3 acte I).

Zuccarelli's quivering touch expresses all the emotions of this decisive meeting with the three witches during which Macbeth's life is irremediably turned upside down. Beyond the strength of the narrative, our panel is a rare testimony to the birth, in the heart of 18th century English cosmopolitan society, of a new sensibility, from which Romanticism would flourish in the following century. 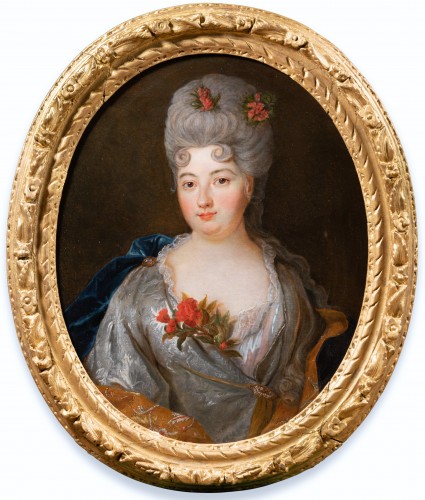 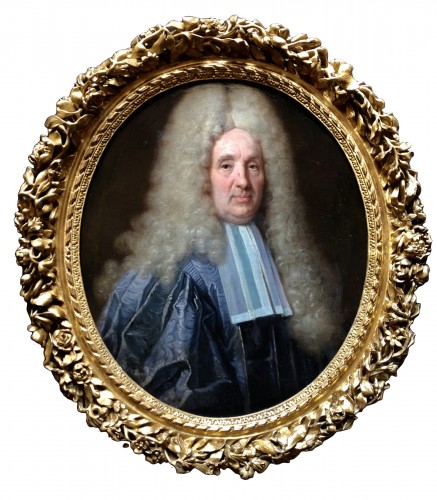 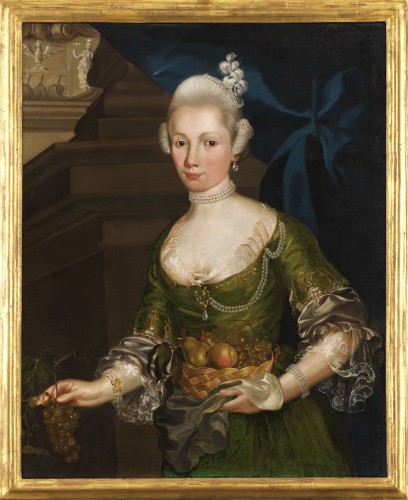