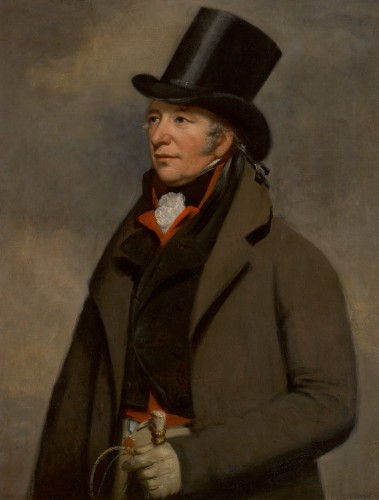 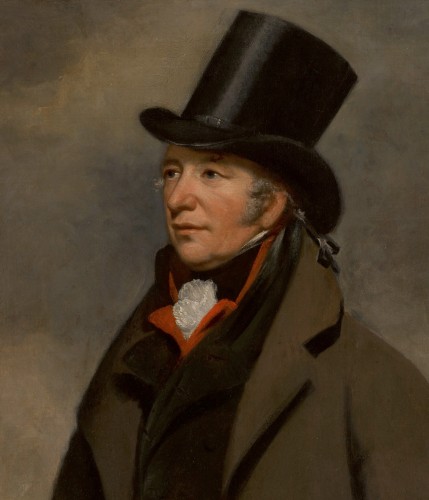 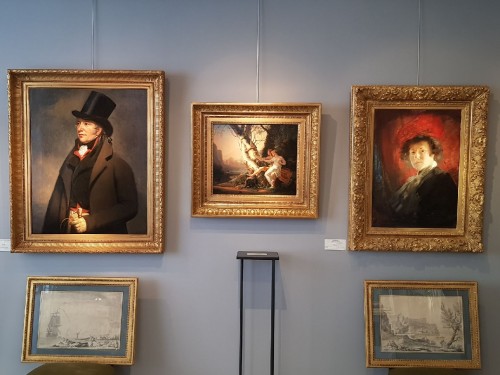 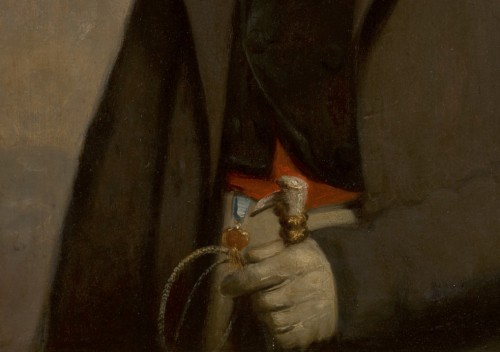 A native of Nottingham, Samuel Wright (1754-1839) was the son of banker John Wright (1723-1789) and his wife Ann (1721-1792), née Sherbrooke; John Wright ran the bank founded in Nottingham in 1761 by his father Ichabod Wright (1700-1777), but was originally a merchant family, very influential in Nottinghamshire and Derbyshire.
Unlike his brother John (1758-1840) who took over the family bank in 1789, Samuel took up a military career and became Captain of the 15th Regiment of Hussars (light dragoons) and Lieutenant-Colonel of the Bunny Volunteers, a kind of local militia formed in 1798.

In the meantime he had married, on July 15, 1788, Anne Margaret of Coventry, daughter of George William, 6th Earl of Coventry (1722-1809) who was portrayed by Perronneau in 1773. Anne Margaret, born in 1757 in the Oxford area, had for the occasion divorced in 1787 Edward Foley (married in 1778), which caused a great stir in both Houses of Parliament at the time.
The couple lived at Gunthorpe (a few miles east of Nottingham), specifically Gunthorpe Lodge, until Anne Margaret's death in 1822; Samuel was still living at Gunthorpe in 1824, before retiring to Upper Broughton, formerly Broughton Sunley, where he is buried.

In 1825, according to the Broughton parish records, he married Anne Foulkes (1805-1866); she was widowed in 1839, inherited Samuel's estate, and remarried in 1846. Samuel had no direct descendants.
In all likelihood, Samuel Wright left his portrait to his brother John upon his death, who was able to enjoy it for only one year at his home at Lenton Hall in Nottingham, which he had built in 1802; the painting ended up at Osmaston Manor, the home John's son Francis had built at the time, around 1845. It remained in the family until the 1950s.
This portrait shows him in the prime of life, around 55 or 60 years old, dressed as a sportsman, with his riding suit, top hat and whip.

Henry-William Pickersgill was one of the leading English portrait painters of the first half of the nineteenth century; from 1845 until his death, he had almost no rival to paint the celebrities of the time. Sobriety and precision characterize his effigies.

He entered the Royal Academy in London in 1805 and exhibited his first portrait there the following year. 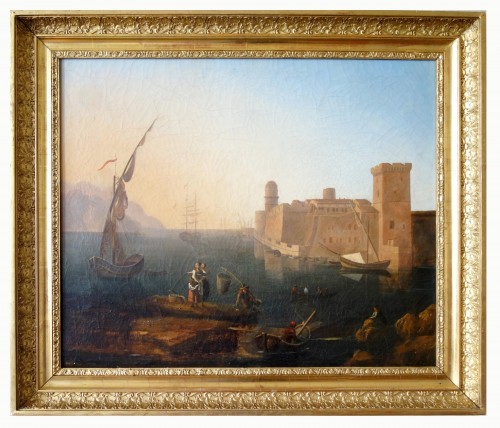