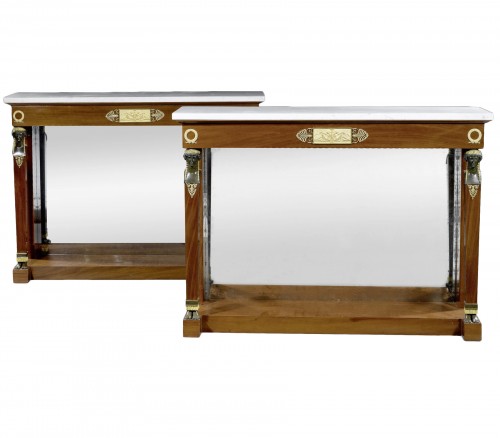 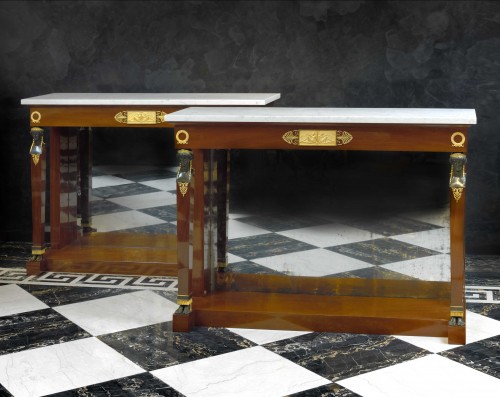 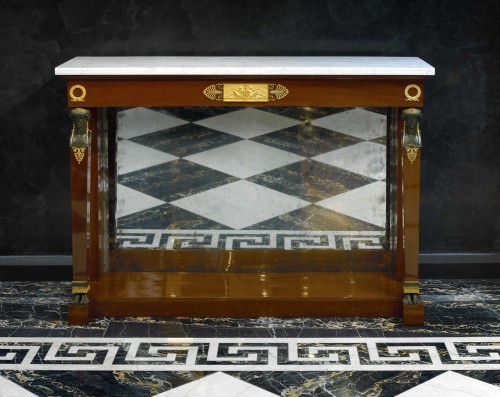 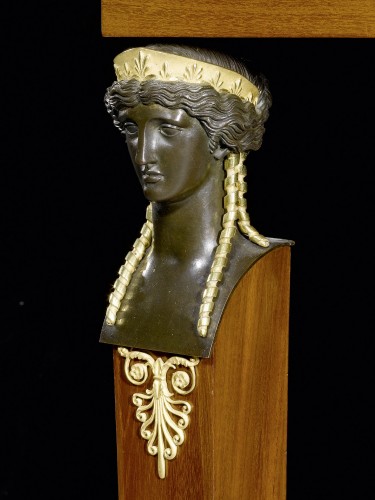 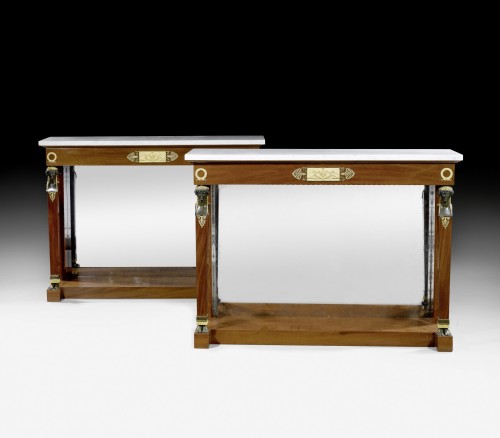 An important pair of Empire gilt and patinated bronze mounted mahogany consoles attributed to Bernard Molitor with mounts attributed to Pierre-Philippe Thomire, each with a rectangular white marble top above a frieze drawer centred by an anthemion banded rectangular gilt bronze plaque featuring a pair of classical maidens seated either side of a torchère and flanked either side by ribbon-tied wreaths above square tapering supports headed by classical female caryatid busts wearing crowns and terminated by human feet appearing below a band of drapery, the unusually large rectangular posterior angular supports flanking a mirrored glass on a breakfronted rectangular plinth

Literature: Ghislain de Diesbach, “Un Nid de Souvenirs en Suisse”, in “Connaissance des Arts”, February 1968, pp. 64 and 65, illustrating the present consoles in situ in the Grand Salon at Château de Wallenried.
Ulrich Leben, “Molitor, Ebéniste from the Ancien Régime to the Bourbon Restoration”, 1992, p. 99, pl. 95, cat. no. 88, illustrating a console by Bernard Molitor of the same overall form and with classical female busts heading the rectangular supports, likewise surmounted by ribbon-tied wreaths but terminating in rams’ head feet. And p. 194, cat. no. 90, illustrating a very similar console attributed to Molitor. And p. 116, pl. 115, illustrating a table de chevet by Molitor with four upright supports which as here are headed by classical busts and terminated by a ring of drapery above pairs of female feet.

Knowing the history of specific works of art not only adds interest but also importance to them as in the case of these fine consoles which were acquired in Paris by comte Nicolas-Antoine-Xavier de Castella de Berlens and for nearly two centuries have stood at his Swiss home of Château de Wallenried. The comte came from a noble background, whose family had lived at the historic castle since the mid seventeenth century. Following the death of his paternal uncle Rodolphe de Castella de Berlens (1705-93), Nicolas-Antoine-Xavier, son of the latter’s brother comte Albert-Nicolas, inherited the castle and all its estate lands. For more than a century various members of the family had distinguished themselves in military service to the French and Nicolas-Antoine-Xavier was no exception. In January 1792 he became aide-camp to Prince Xavier of Saxony, fighting against the French Republican army and was then to serve under Napoleon in a series of campaigns. Having been made a Colonel in 1806 he was then promoted to the rank of General-de-Brigade and was also awarded an Officier de la Légion d’Honneur in November 1812 having been seriously wounded in October that year in a heroic defense against the town of Polotzka during the French retreat from Russia. He thus spent a period of convalescence at his hôtel in
Paris, where from 1806-12 the comte had regularly stayed, spending much of his free time acquiring fine works of art from the most fashionable ateliers to furnish Château de Wallenried. In this he was like his uncle, who had also furnished the castle with the finest pieces. In addition to the present consoles, the collection acquired in Paris was in the prevailing Empire style and included a pair of gilt bronze mounted mahogany lits de repos, which likewise are attributed to Bernard Molitor, a fine suite of mahogany seats and settees with monopodia supports as well as a pair of winged Victory candelabra by Pierre-Philippe Thomire, elaborate chandeliers, silk hangings and papier peints. In 1820 the comte commissioned the construction of the Grand Salon in the castle’s east wing where these consoles and his other newly acquired pieces stood below a series of nine large allegorical paintings by Charles Meynier (1768-1832). Nicolas-Antoine-Xavier, who was awarded a Commander de la Légion d’Honneur in 1814 and received the medal de St Louis, was not only known for his prowess as a military leader and as a connoisseur of the arts but also for the improvements he made to the agricultural lands on his estate. He died in France as an officer in the reserve army; his Swiss estate was then inherited by his son Rodolphe, whose own death brought about the end of that particular branch of the family. Château de Wallenried was then owned by the Delley family and remained so until it was eventually sold in 1995.

Although the exact authorship of this fine pair of consoles is unrecorded, based on their style and quality they can be attributed to the esteemed ébéniste Bernard Molitor (1755-1833) and the bronze mounts to celebrated fondeur-ciseleur Pierre-Philippe Thomire (1751-1843) who was one of the finest makers to supply the ébéniste. As here the latter’s work was noted for its simple outlines and architectural emphasis which was so often shown to great effect by the combined use of gilt and patinated bronzes, fine quality marble and finest mahogany veneers. Seventeen different models are known of busts or heads used as capital supports on Molitor’s furniture which as here often featured braided hair and intricately cast crowns or headdresses.

As one of the finest furniture-makers from before the Revolution to the Restoration, Molitor combined originality and individuality to accord with changing fashions. He was born in Luxembourg of German parents and by 1778 had settled in Paris with his cousin Michel Molitor. He became a maître in 1787 and received several royal commissions, surviving the Revolution and was later honoured with orders from the Directoire, the Emperor Napoleon, King Jérôme of Westphalia as well as a number of important private patrons including the duc de Choiseul-Praslin.

Molitor’s use of a maker’s stamp was irregular and thus authentic pieces are sometimes difficult to identify. Molitor’s business was extremely successful, counting among his clientele not only Queen Marie-Antoinette, her royal circle but also later the Emperor Napoleon and his immediate circle. Examples by and attributed to Molitor (listed in Leben’s monograph) can be found in Paris at the Musées du Louvre, Marmottan, des Arts the Mobilier National and Nissim de Camondo as well as the Châteaux de Malmaison, Versailles and Daubeuf in Normandy. Other works are housed in the Wallace Collection London, Cleveland Museum of Art Ohio, the Carnegie Institute Pittsburg, Huntington Library and Art Gallery in San Marino, Toledo Museum of Art Ohio, Schloss Wilhelmshöhe Kassel and in numerous private collections. 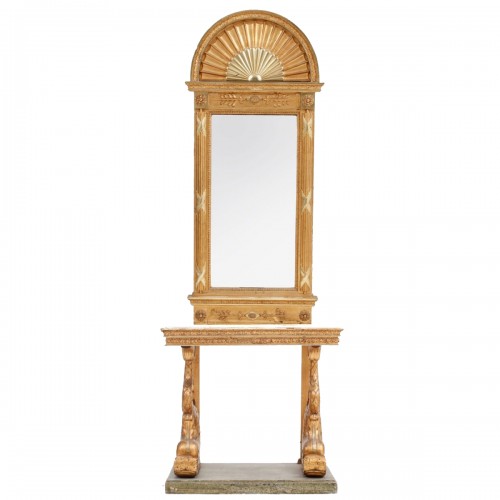 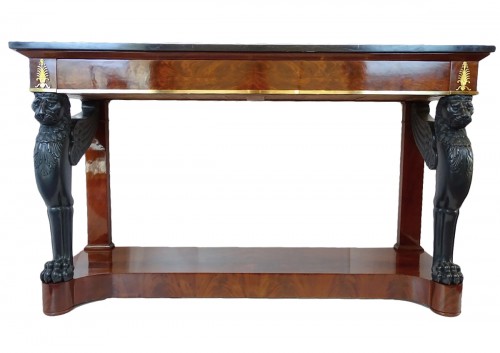 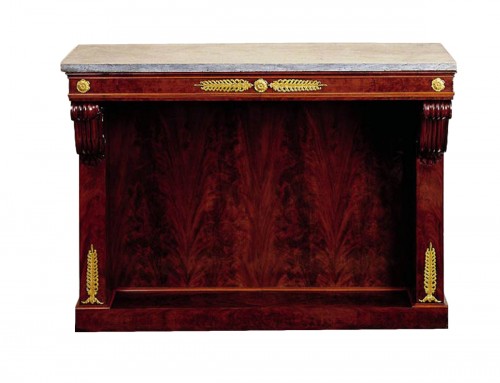 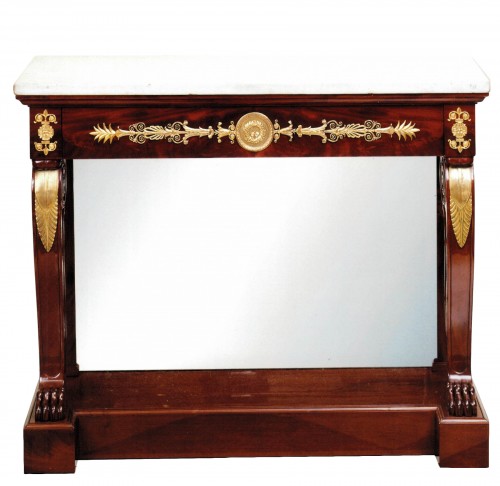 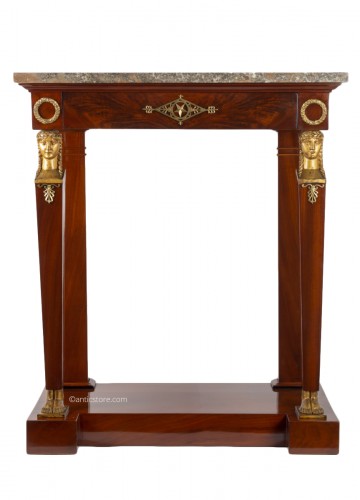