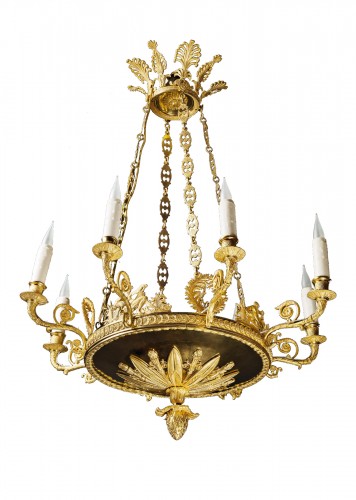 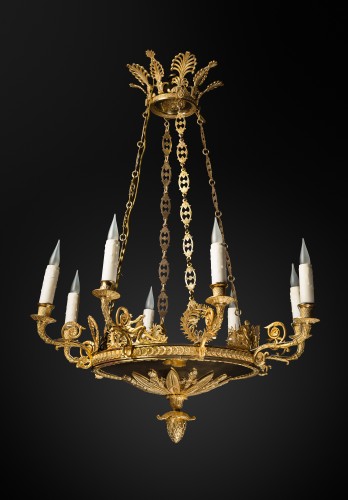 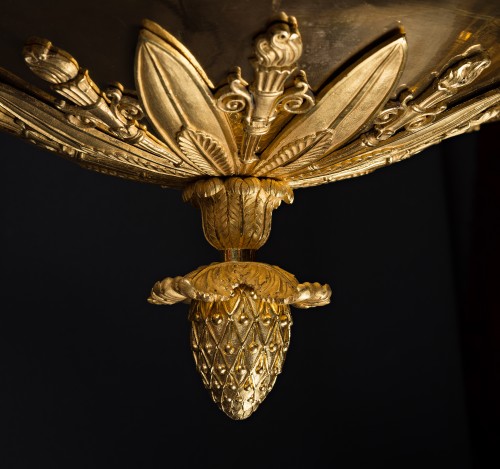 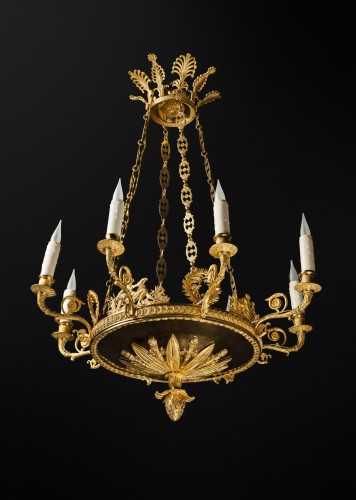 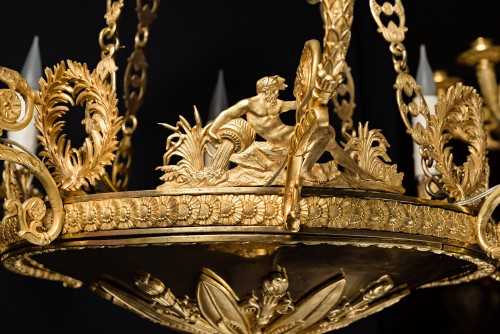 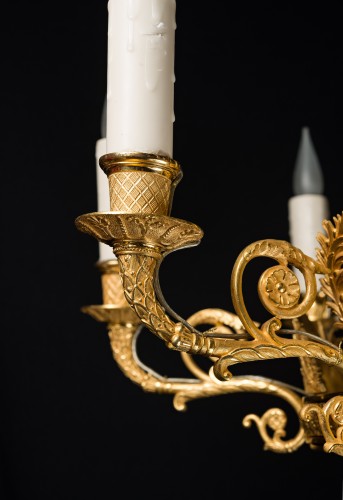 A rare and important Russian Empire gilt bronze eight-light chandelier attributed to the bronzier Andrei Schreiber after a design attributed to the architect Karl Rossi, surmounted by a band of anthemion and lotus palmettes above the corona ring which is mounted by four rosettes and from which hang four sets of linked chains suspending the enclosed circular dished tazza which is cast around its upper edge with overlapping rosettes and is mounted above by four alternating berried laurel leaf wreathes and four classical bearded river gods who each sit reclining against rocks amid water lilies and other river vegetation as they pour water from an upturned urn supported in their right hand and hold in their left hand a sword within its scabbard, the main frame issuing eight foliate cast scrolled candle branches, each with circular drip pans cast beneath with lotus and palmetted motifs and surmounted by vase-shaped nozzles, the underside of the circular dish mounted by alternate flaming torches and stiff leaves and centred by a foliate and pineapple boss. Now wired for electricity

This magnificent Russian Empire chandelier compares closely to a number of others designed by the celebrated architect Karl (Carlo) Ivanovich Rossi (1775-1849), notably one that he designed to hang in the corner sitting room at Pavlovsk Palace in the outskirts of St. Petersburg which was made by the celebrated bronzier Andrei Schreiber (1777-1843). As here the latter has eight lights, it features a very similar corona from which suspend four sets of almost identical chains and is again decorated with comparable mounts below the dished tazza from which suspends a similarly shaped foliate pineapple boss. Furthermore, it has superb figural mounts around the main ring which features pairs of swans while here we see alternate wreaths and reclining river gods. The latter are of particular interest since they compare to antique sculptures, notably one identified as the river deity Arno, in the Vatican Museum, Rome. As here the ancient Roman marble portrays the semi-nude river god with his curly mop of hair and beard as he reclines against a rock while holding a similar urn in his hand. This in itself helps support the attribution to Karl Rossi as the designer of this chandelier for although he made his name in Russia, he was in fact born in Italy and having returned there he studied its antiquities at first hand; in turn he often reflected his knowledge of classical Italian art and artefacts within his own designs.

Rossi, who was born in Naples in December 1775, then travelled to Russia as a ten-year-old boy with his mother, the renowned ballerina Gertruda (Guertroude) Rossi. Noted as one of the major Russian Neo-classical architects during the period of the French Empire style, Rossi’s work reflecting the public’s enthusiasm and triumphal mood following the 1812 victory against Napoleon. Rossi was not only a versatile architect and urban planner, especially at St. Petersburg but he also paid great attention to designing individual luxury objects so that they would accord with his own interior designs. Having trained under the St. Petersburg architect and designer Vincenzo Brenna he then assisted Brenna in the construction of Saint Michael’s Castle (completed 1800) for Tsar Paul I. He then went on to design the ‘Memorial to Great Men’ and the Triumphal Arch, after which he went to Italy, 1802-3 visiting the classical architectural constructions in Rome, Florence, Venice and other major cities.

On his return to St. Petersburg he embarked on an elaborate plan to remodel the city’s Admiralteiskaya embankment. However, it was dismissed as light and unimportant, thus Rossi worked for a period at the glass and porcelain factories in St. Petersburg, decorating plates and dishes with flowers and ornaments. At the same time he continued with his architectural projects and in 1806 was rewarded when he, together with other architects, was sent with the so-called Kremlin Expedition to Moscow. The goal was to renovate the governmental buildings of the Kremlin and to design new complexes in Moscow and its suburbs.

Karl Rossi returned to St. Petersburg in 1815 and the following year was appointed to a position on the committee of structures and hydraulic works. Rossi not only constructed individual buildings but large architectural complexes. For example between 1818 and 1822 he designed and worked on the palace ensemble on Elagin Island in St. Petersburg, a favourite recreational complex for the nobility, with its stone palace, beautiful gardens complete with ponds, conservatories and dwellings for servants. In addition Rossi created a large number of St. Petersburg’s monumental architectural projects and transformed the centre of the city, notably the Palace Square overlooked by the Emperor’s residence at the Winter Palace while other major projects included the redevelopment of the Senate Square as well as the construction of the Aleksandrinsky Theatre. Despite his acclaim and although he was at one stage the highest-paid architect in the Russian Empire, Rossi lived a relatively modest life, donating most of his money to the poor and charitable organizations. When Karl Rossi died on 6th April 1849, he was buried at the Volkovskoe Cemetery in Saint Petersburg, but in the 1930s his remains were transferred to the Lazarevskoe Cemetery at the Aleksandr Nevsky Monastery.

In addition to his large scale architectural projects, Rossi was entrusted with decorating the interiors of several major Imperial residences including some of those at the Winter Palace, at Pavlovsk Palace (1815-16), Anichkov Palace (1816), at Elagin Palace (1818-22) and also Mikhailovsky Palace (now the Russian Museum) which was built to Rossi’s design between 1819 and 1825 and where Rossi conceived some of the interior decorations including its light fittings and furniture. During the major restoration at Pavlovsk, Rossi created a corner sitting room to replace the former bedroom of Paul I. Embodying his knowledge of ancient Rome, the walls of the corner sitting room were faced with artificial marble divided by borders featuring winged genii and palmettes inspired by ancient Roman frescoes. Rossi completed the interior by designing elegant Neo-classical furniture above which hung the aforementioned chandelier that was made to his design by the leading bronzier Andrei Schreiber.

Because of its similarity with the latter chandelier at Pavlovsk and also on account of its superb quality of craftsmanship, the present chandelier can safely be attributed to Andrei Schreiber. Not only one of the principal craftsmen employed for the redecoration of Pavlovsk, Schreiber also made chandeliers for the state rooms of the Mikhailovsky Palace and bronze ornaments for the interiors of the Anichkov Palace, Elagin Palace and the Winter Palace after designs by Karl Rossi. In addition to Rossi, Schreiber also collaborated with the architects Auguste de Montferrand and Alexander Brullov. Like Rossi, Schreiber was not of Russian origin but was born in Germany. During the 1790s he went from Yuriev to St. Petersburg, where in 1801 he founded a bronze workshop near to the Church of the Holy Sign in the Ligovka district. Eventually becoming one of the city’s leading bronziers, Schreiber, assisted by his sons Ivan and Pavel was to employ 106 craftsmen. When advertising his concern in the St. Petersburg Gazette of 5th October 1809, Schreiber noted that he made ‘lustres, lamps for the wall, the table and with shades, candlesticks, candelabra, vases, fireplace items and other bronze articles of furnishing’ (Igor Sychev, “Russian Bronze”, 2002, pp. 94-95). Furthermore, he received various commissions from the Imperial family, which resulted in his appointment as Bronzier de la Cour de S.M.I.

Following Schreiber’s death in 1843, his business was inherited by his son Pavel, who subsequently leased out and then in 1847 sold the concern to Karl Giese and Jean Landrus. As here, many of Schreiber’s chandeliers were mounted on the underside of the dish with sumptuous classically inspired radiating mounts, as can be seen on another chandelier attributed to him in the sale of the Steinitz collection (Christie’s London, 6th December 2007, lot 444) as well as on another by him in the A. S. Pushkin Museum, Moscow (illustrated in Sychev, op. cit., p. 95). One can also admire other of his creations such as an elaborate flower-vase candelabrum of circa 1830 in the Hermitage Museum, St. Petersburg. Also in the Hermitage is a mantle clock with case by Schreiber styled as a Moresque Portico. In contrast his most famous clock case known as ‘Diana Hunting’, now in the Rundal Palace, Latvia, portrays the mythological goddess Diana standing in her chariot which is drawn by four stags. When it was shown at the Public Exhibition of Russian Manufactured Goods in St. Petersburg, 1829, Schreiber’s clock received great acclaim and was awarded a gold medal. 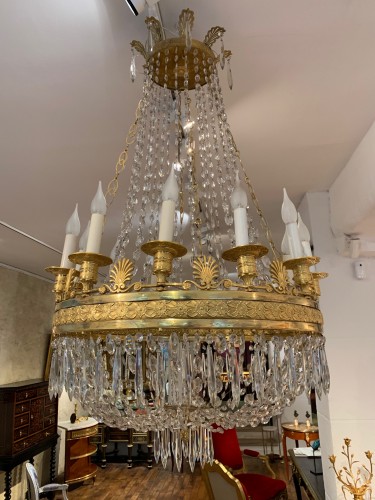 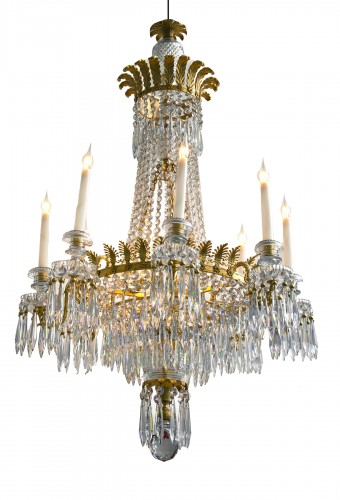 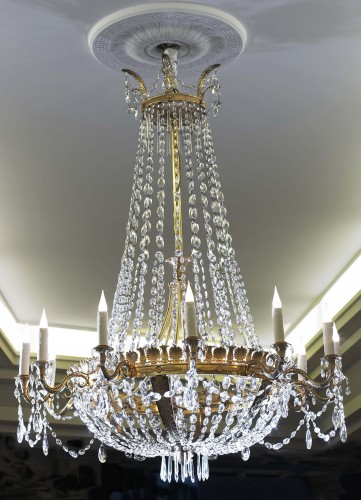 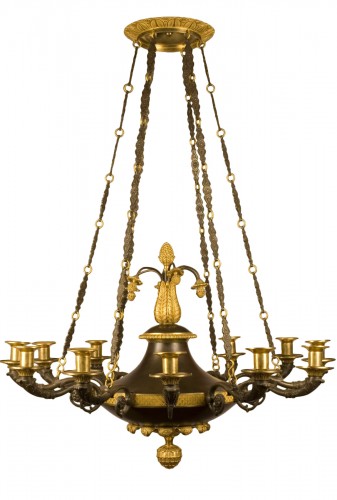 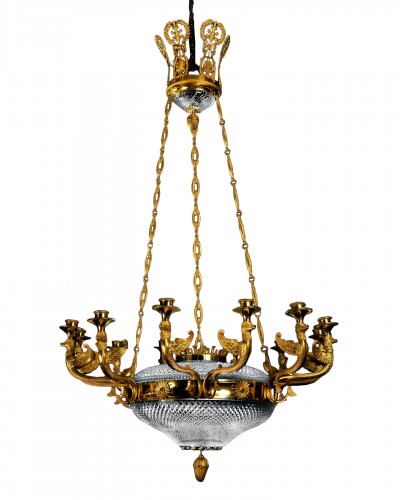 Chandelier in cut crystal and gilt bronze St Petersburg circa 1820