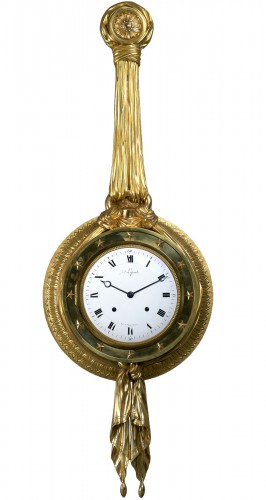 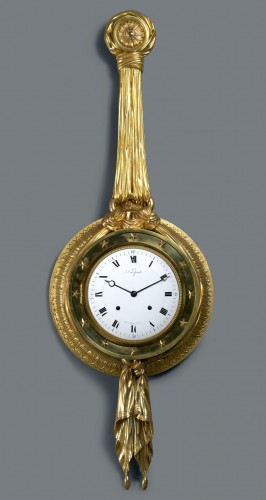 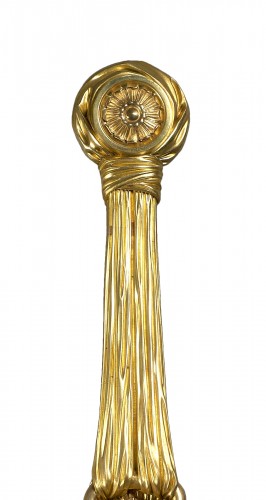 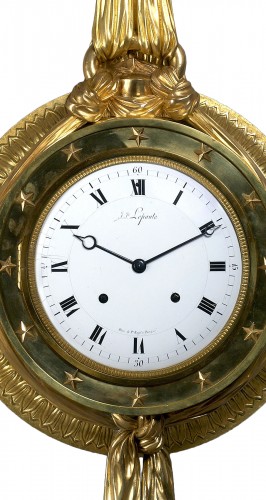 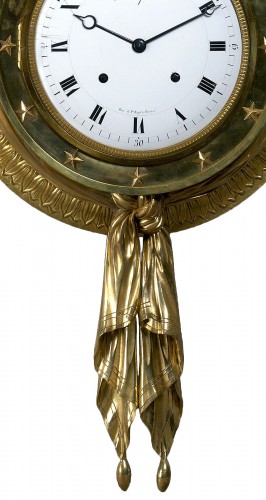 A very rare Directoire gilt bronze cartel clock du Congrès by Jean-Joseph Lepaute signed on the very fine white enamel dial J. Jh. Lepaute Place du Palais Royal à Paris and also signed by the esteemed dial painter Dubuisson with Roman and Arabic numerals and a pair of blued steel Breguet style hands for the hours and minutes. The movement striking on the hours and on the half hours. The elegant case with the bezel surrounded by a ring mounted by twelve stars within an outer ring cast with lotus leaf banding and tied around the middle by a band of ribbon gathered through a ring above 12 o’clock and suspended from above by a stylized rosette-shaped clip and then falling as loose drapery below the dial

Another cartel du Congrès or Congress clock by Lepaute of the same model was commissioned by Napoleon for Château de Compiègne. It was later used under the Third Republic for sessions for the National Assembly and is probably the same as the one that now hangs in the vestibule of President’s residence at Palais de l’Elysée. The general design of the model is based on a number of late eighteenth century thermometer and barometer cases made from either carved wood or gilt bronze. These inspired a number of clock cases of the same basic design but with more intricate gilt bronze mounts; among them was a cartel with a movement by Nicolas Sotiau from the Steinitz Collection (sold at Christie’s, London, 6th December 2007, lot 132) as well as another in the Wrightsman Collection, Metropolitan Museum, New York with a movement by Simon Buzot and case decorated with musical trophies suspended from a tied ribbon (illustrated in F. J. B. Watson, “The Wrightsman Collection”, 1966, vol. II, no. 184, p. 363). However closer in its simplicity is a gilt bronze cartel suspended by ribbon ties signed on the dial Cronier à Paris (illustrated in Pierre Kjellberg, “Encyclopédie de la Pendule Française du Moyen Age au XXe Siècle”, 1997, p. 195, pl. B).
Jean-Joseph Lepaute, known as Collignon (b. circa 1768 d. 1846), who was born at Bièvres in the Ardennes, was the great nephew of Jean-André Lepaute (1720-89), one of the founders of the esteemed Lepaute dynasty. Having settled in Paris at a young age he trained in the family workshop before opening his own business, probably in the early 1790s, at Place du Palais Royal. Sometime after 1795 and up until 1811 he was in business with his uncle Pierre-Basile Lepaute, known as Sully-Lepaute (1750-1843) working under the name of Lepaute

Oncle & Neveu. Together they enjoyed great repute, gaining influential clients and winning a silver medal at the Exposition des Produits de l’Industrie of 1806. In 1811 Jean-Joseph founded the House of Lepaute Neveu à Paris; two years later he created a clock for the Palais de Fontainebleau and about the same time ones for Saint-Cloud as well as Compiègne. Appointed Horloger du roi et de la chambre des deputes, by 1820 his business was based at rue de Richelieu and the following year at rue St-Honoré.
As a reflection of the clock’s importance the dial was made by Etienne Gobin, known as Dubuisson (b. 1731 d. after 1815) who with Joseph Coteau (1740-1812) was one of the finest painters of highly ornamented dials and enamelled clocks during the late eighteenth and early nineteenth centuries. Born in Lunéville, Dubuisson worked firstly as a porcelain painter in his hometown as well as in Strasbourg and Chantilly. Like Coteau, he was employed at Sèvres, where from 1756-9 he worked as a flower painter before specializing on his own account by supplying the finest enamelled watchcases and clock dials to the leading clockmakers of his day. In addition to Lepaute they included such celebrated names as Dieudonné Kinable, Jean-Simon Bourdier, Robert Robin and Louis Berthoud as well as Antide Janvier for whom he created a set of highly intricate painted dials for a very complex astronomical clock (illustrated in Jean-Dominique Augarde, “Les Ouvriers du Temps”, 1996, p.107). During the 1790s Dubuisson was recorded in the rue de la Huchette and later in circa 1812 at rue de la Calandre as well as rue des Lavandières Sainte-Opportune.