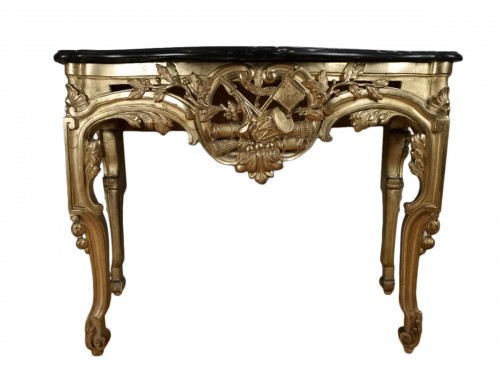 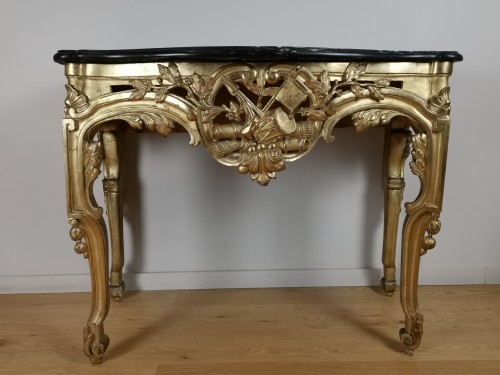 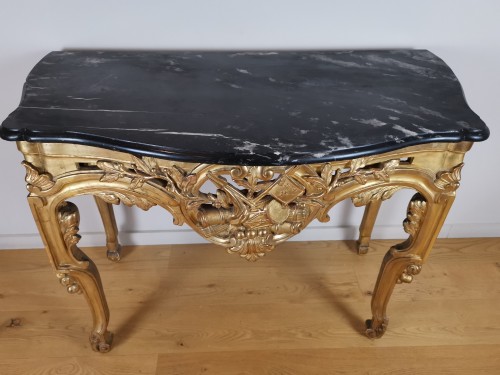 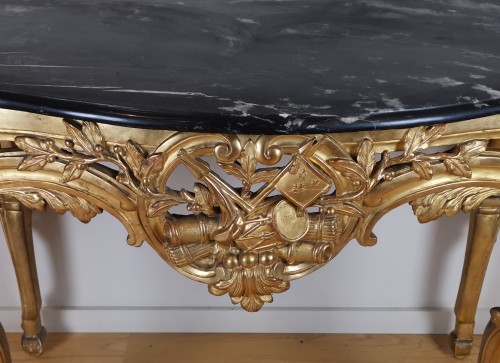 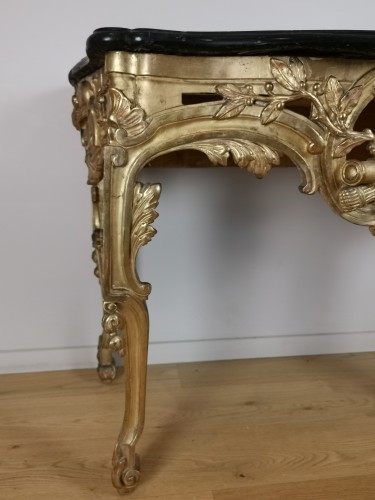 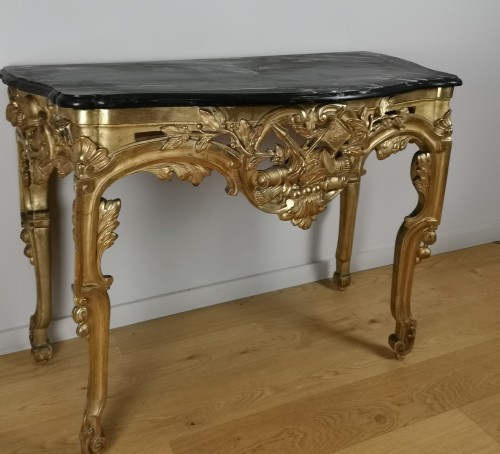 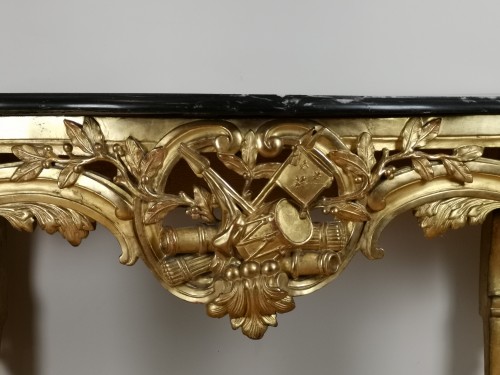 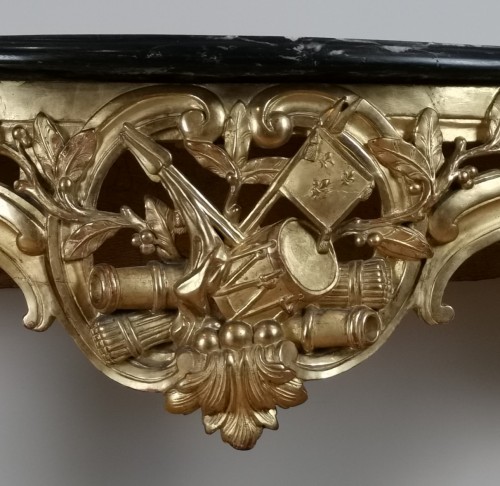 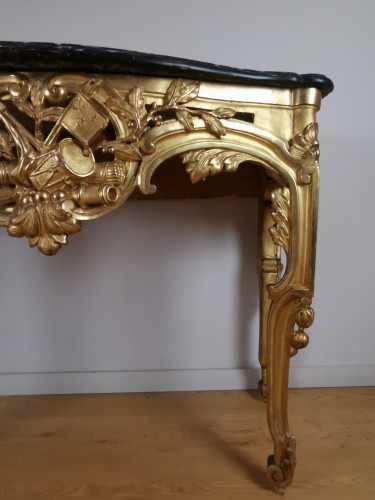 A Louis XVI period Greek-Neoclassical console table circa 1781.
Elegant console with four legs in carved, openworked and gilded lime wood with black Sablé marble entablature; trapezoidal shape with a generous curve as convex as concave, this console is halfway between the Greek and neoclassical styles, from the Louis XVI period around 1781-1785. The carved belt is carved on all three sides. Its decoration is as elegant as it is atypical and consists of asymmetrical ornaments of the most martial. The main crosspiece is embellished in its median part with a cartouche of scrolls from which emerges the martial attributes of the crown of France, such as the immaculate royal flag associated with the pennant of the princes of the House of France. Both floating on a bundle of cannons, cannonballs and battle drums, signifying the symbol of the French expeditionary force in the American War of Independence. This more martial symbol is embellished with multiple olive branches loaded with fruit and with foliage as dense as it is serrated; an inexhaustible source of strength and generosity, it symbolizes perennity and wisdom. The side rails, all curved and sinuous, are sculpted in a divergent manner. The one on the right is provided with a bundle where axe, shield and torch are mixed with the same decoration of olive branches but accompanied by bundles of foliage meaning prosperity. The left crosspiece is decorated with elements of armor such as helmet, breastplate and arm band but still decorated with olive branches and bundles of foliage. The belt rests on a base with four feet. Each of the feet is divided into two parts, the upper part is linear with foliage. The lower part for its part is concave to decrease, its end being raised of a plant scroll; both are unified by a ribbon to the Greek following the profile of the base. The latter is topped by an acanthus leaf unifying the crosspieces and the base. Dimension width 114.5cm - Depth 59.5cm - Height 82.7cm. 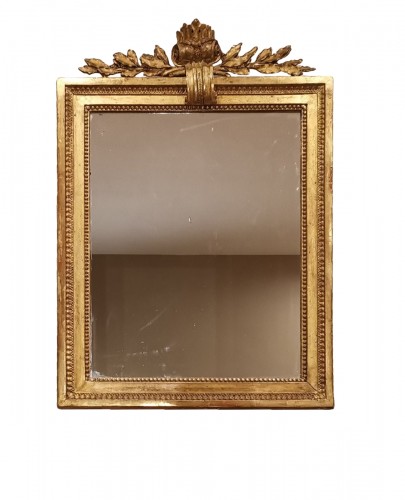 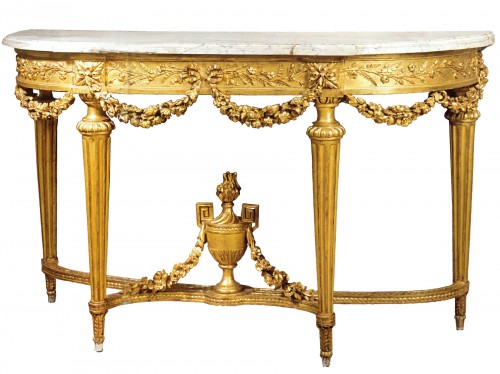 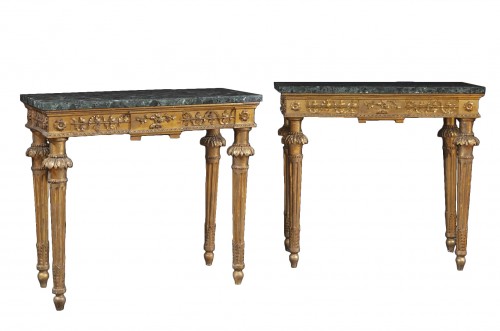 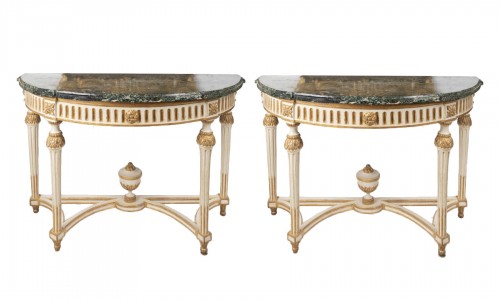 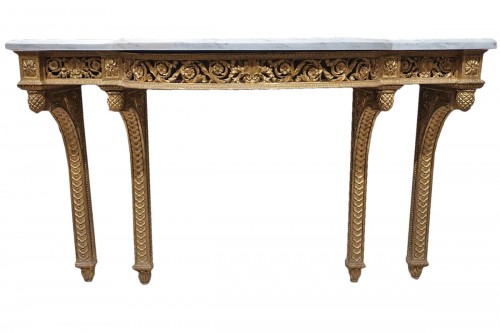 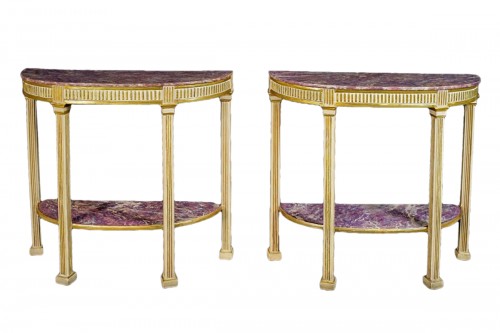 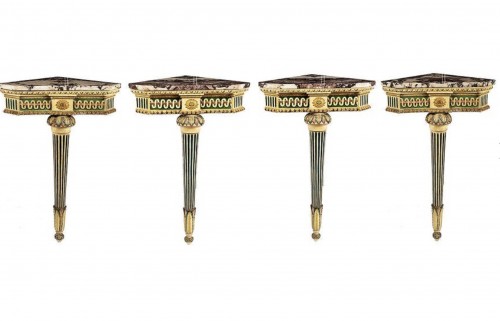