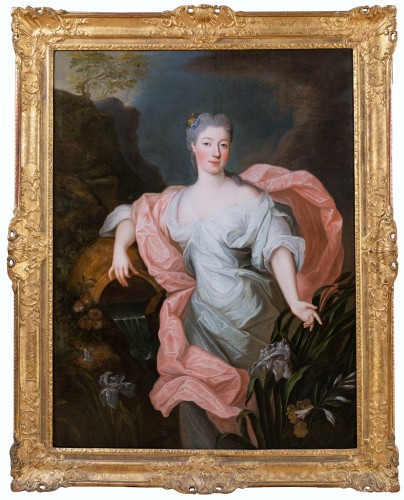 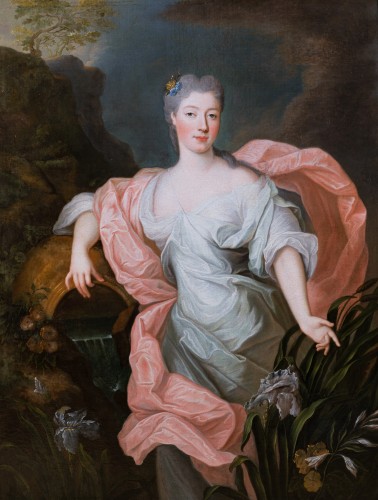 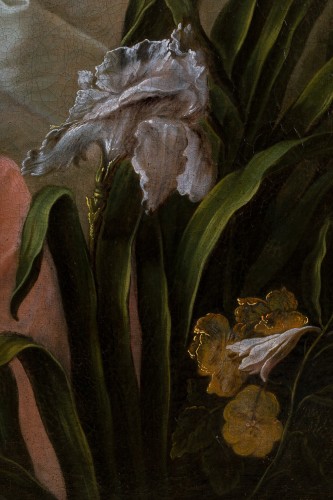 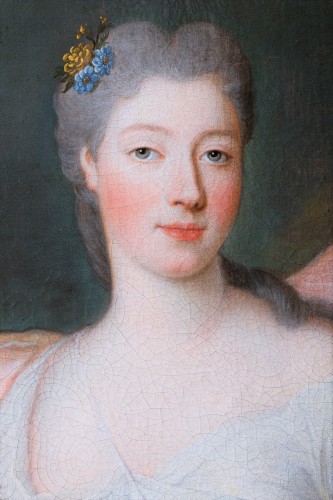 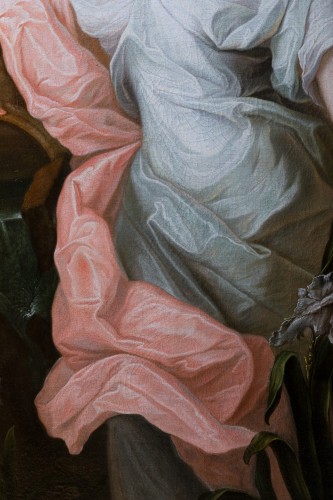 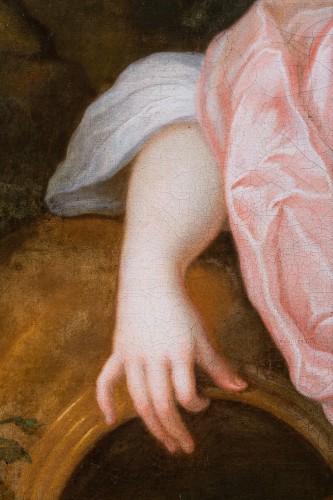 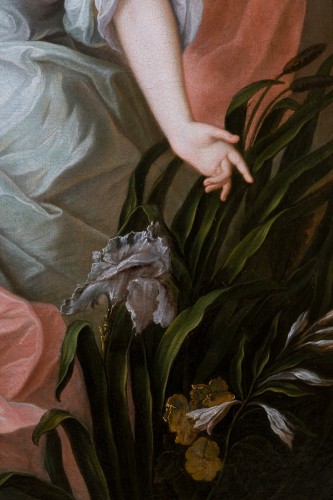 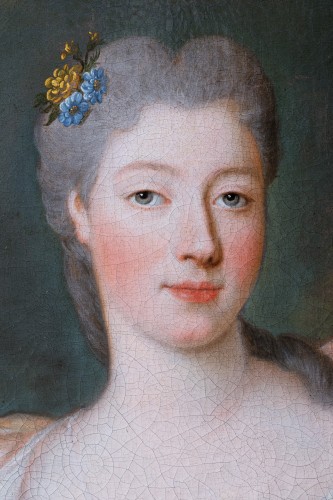 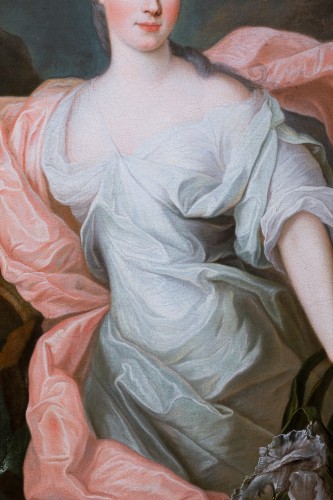 Supposed portrait of Elisabeth Therese of Lorraine by Pierre Gobert and his workshop.
Important allegorical portrait at almost all lenght, real size, of a princess of House Lorraine depicted as Water Nymphe.
On the background of rocky landscape, the young woman is portrayed standing, wearing a loose white satin dress with gray-silver reflections and wrapped in a large pink stole.
The thickly powdered and partly pulled up hair frames her oblong face with wide light gray eyes, an elongated nose and crimson lips. Her abundantly rosy cheeks contrast with her white skin. She stares directly at the viewer with confidence and insurance.
Besides the ornament of a few flowers, the young woman does not wear jewelry, in order to be in harmony with nature.
She leans with her right arm on a jar from which the water is flowing, while she indicates with her left hand the irises that unfurl beside her.
Far from the usual court costumes, the pink and white draperies here constitute a fantasy wear, which places the princess in a timeless composition in the role of water nymph.
The floating fabrics envelop the figure of the young woman and bring dynamism to the composition while the palette of pastel colors associated with the backgrounds of a natural environment make the painting more intimate and break with the tradition of static official portraits with heavy draperies, brocade dresses and countless jewelry.
The delicacy and lightness of her antique costume modulated in a soft palette, the silvery reflections of the white dress harmonize in beautiful harmony with the rosy shades of the scarf, and contrast with the cloudy sky in the background.
The choice to be portrayed as a water nymph was obviously dictated by fashion in early 18th century in order to underline the model's charm and natural elegance. However our artist strives to offer us a portrait imbued with the personality of the princess, because the water flows gently, but can quickly turn into a threatening flow, this quiet strength of character is perceptible in the Habsburgian features of the young woman , coming from her father.

Pierre Gobert (1662-1744)
Son of Jean Gobert, sculptor of the King, grandson of Jean Gobert the eldest, carpenter sculptor, brother of Jean Gobert known as “ordinary painter of the King” Pierre Gobert was born in Paris or Fontainebleau in 1662. Perhaps trained in contact of Claude Lefèvre, he would have worked from 1679 for the court of Bavaria, by carrying out the portrait of Marie-Anne, future dauphine of France. Renewing her confidence in the artist, she commissioned a portrait of her son the Duke of Burgundy in Versailles in 1682. Received at the painting academy on September 24, 1701, with the portraits of Corneille van Clève and Bon Boullogne, Pierre Gobert exhibited fifteen portraits at the Salon of 1704, and demonstrated his privileged access to the court: among these portraits appear that of the Duchess of Maine and of the little Duke of Brittany, the future Louis XV. Thanks to this reputation, and undoubtedly thanks to the intervention of Elisabeth-Charlotte, Gobert was approached by the court of Lorraine in 1707, in order to carry out the portrait of the Dukes of Lorraine, Elisabeth - Charlotte of Orleans and the four princesses. It is probable that Gobert developed a workshop during this period, since he seems to have operated back and forth between Paris and Lorraine, and even had portraits sent from Paris. Gobert thus obtained the title of ordinary painter to the Duke of Lorraine, and continued to deliver portraits to the court, in particular in 1719 and 1721. He thus participated in the artistic influence of the court of Lunéville, which sought to register in the wake of Versailles.
Back in Paris, on the strength of this prestigious introduction, which he used to boast of by sporting the title of "ordinary painter of the Duke of Lorraine", Gobert then worked for the Condé and the Conti, and for the Prince-Elector Max Emmanuel of Bavaria. In 1737, the painter shone for the last time by presenting at the Salon one of his most ambitious portraits, that of the family of the Duke of Valentinois (Monaco, princely palace). By the choice of his somewhat fixed attitudes, by the affected and graceful disposition of the fingers of his female models, by the use of historiated disguises, by the depersonalized and flattering type of his resolutely placid faces, Gobert had succeeded in creating thanks to his hard and recognized work, a style that stood out from the works of Largillierre and Rigaud, his contemporaries.

Élisabeth-Thérèse of Lorraine, born in Lunéville on October 15, 1711, sister of Emperor François I of the Holy Empire, became Queen of Sardinia through her marriage to Charles-Emmanuel III of Sardinia.
She is the ninth child of Duke Léopold I of Lorraine and Élisabeth-Charlotte d'Orléans, and was at one time considered to be the wife of Louis XV and then of the Duke of Orleans. 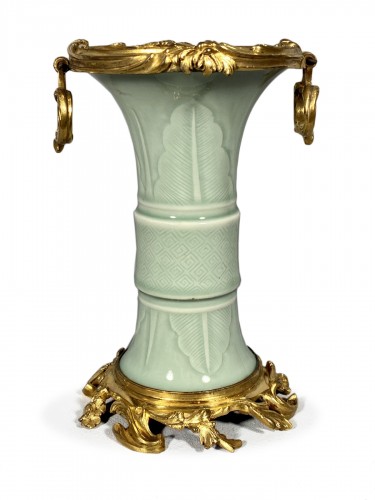 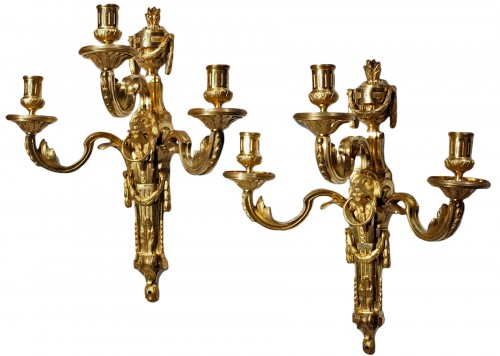 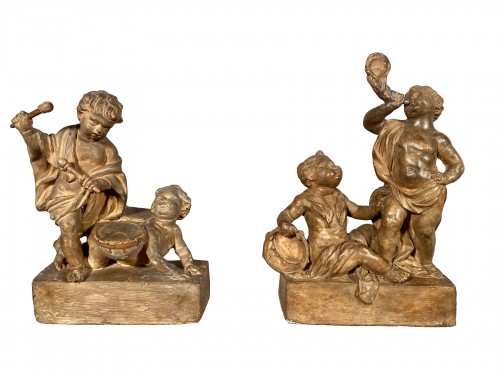 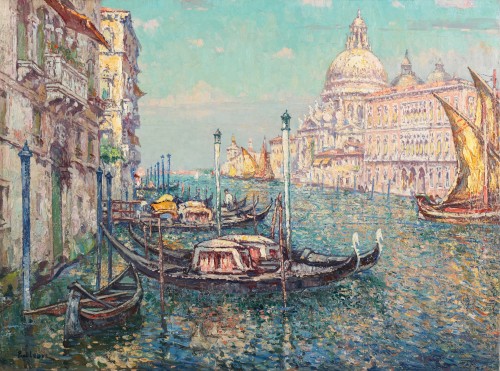 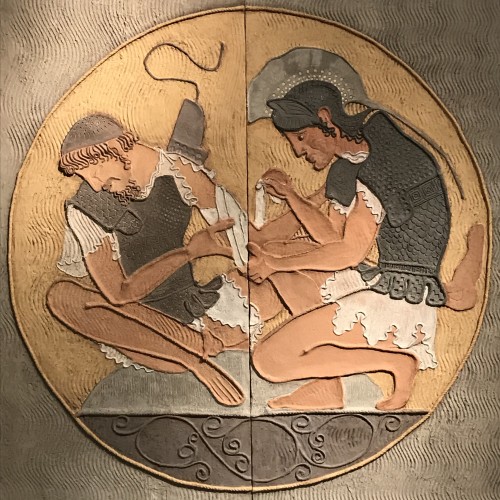