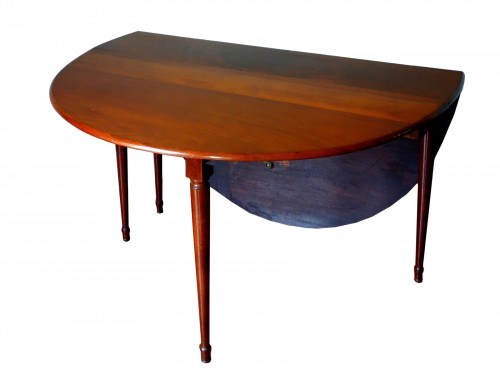 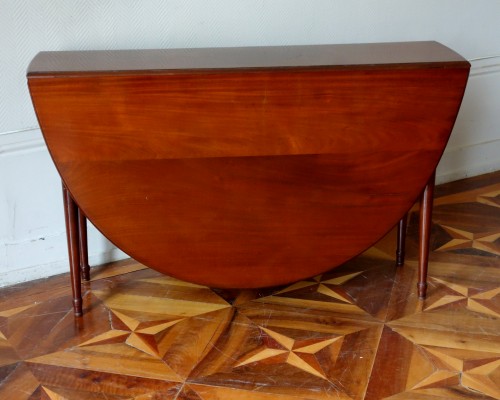 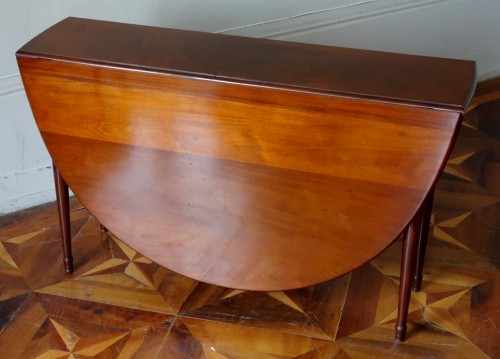 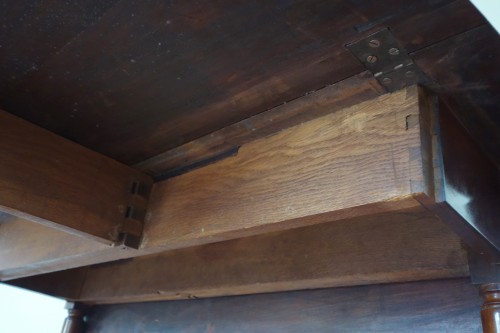 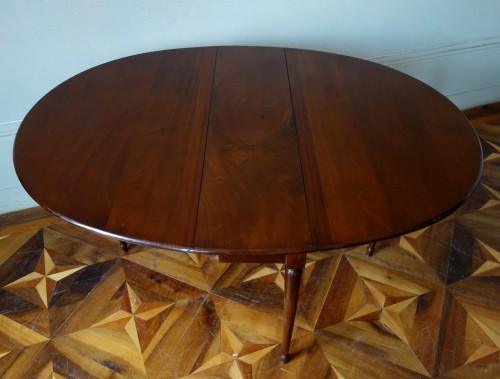 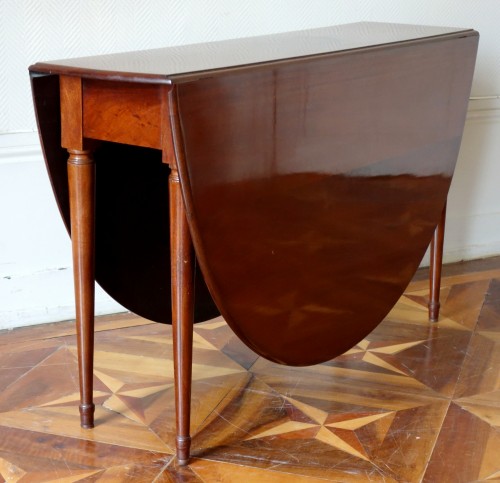 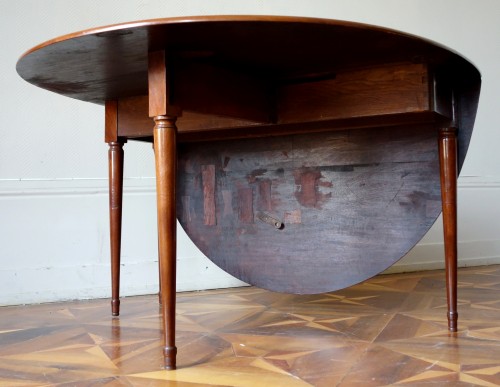 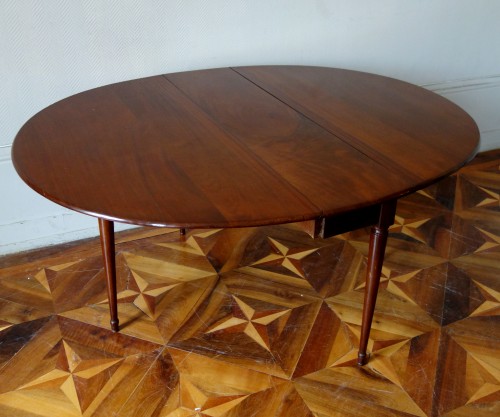 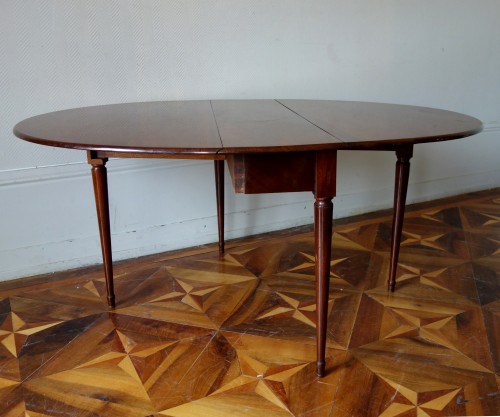 Rare gateleg folding dining table made of solid mahogany, oak and mahogany veneer, all traditionally varnished with a buffer. Folded, it takes the form of a thin console to place along the wall. Two legs out of four are articulated by a clever mechanism that allows them to unfold at 90° and thus to raise one or two extensions. End of the Louis XVI period, around 1790 just before the Revolution. It bears the stamp of one of the most prestigious cabinetmakers of the Ancien Régime: JF LELEU

Jean-François Leleu (1729 - September 3, 1807) - Cabinetmaker - Paris. Master, 1764. "Supplier of the royal castles". He was one of the most famous cabinetmakers of his time.
Jean-François Leleu is rightly considered as one of the most talented cabinetmakers of his time. After an apprenticeship as a simple worker in the Faubourg Saint-Antoine, he joined the famous cabinetmaker Jean-François Oeben, cabinetmaker to the King, in the Arsenal, as a journeyman. His colleague Jean-Henri Riesener succeeded Oeben after his death in 1763. Leleu, disapointed, took his master's degree, which he obtained in 1764, and opened his own workshop on rue de la Contrescarpe, which he left shortly afterwards for larger premises on rue Royale. His reputation grows very quickly. He became the main supplier of the Prince de Condé who ordered numerous pieces of furniture for his various residences. In 1780, he took on his son-in-law Charles-Antoine Stadler as a partner, leaving his establishment to him around 1792.
At the beginning, still under the influence of Oeben, Leleu's furniture is grandiose and sumptuous, but gradually he acquires more sobriety. His works, then very personal, are of a great simplicity, with perfect proportions and the finish of the execution as well as the choice of materials are remarkable. Leleu produced a multitude of neoclassical Louis XVI furniture, "à la grecque", with robust, very architectural forms. The marquetry used has regular patterns, grids decorated with four leaves or rosettes that extend over the entire surface of square, rectangular or diamond-shaped panels, always delimited by a darker wood or bronze frame that reinforces the large volumes of the furniture. Leleu's furniture can be found in the most important museums and collections.

Our furniture is well up to the level of the Master: everything is of excellent quality of manufacture: oak structure (sign of a furniture of great quality when the majority of the pieces of furniture of XVIIIe time are assembled on fir), beautiful assemblies in dovetail, solid mahogany (of very beautiful quality) for the plate and veneer of mahogany for the sleepers.

Our table is in excellent condition. The varnish was cleaned by our cabinetmaker with a high gloss buffer. There are no accidents to report. Everything is original

Beautiful amateur piece, perfectly adapted to a collector's Parisian apartment. Ideal size for a comfortable dinner for 4 or 6.
It is really an interesting model, the work of a great "designer" of the 18th century, beautiful lines where nothing has been left to chance. A piece of furniture of very high quality but which remains discreet without being "flashy". The connoisseurs will admire it, the others will pass by without seeing it... 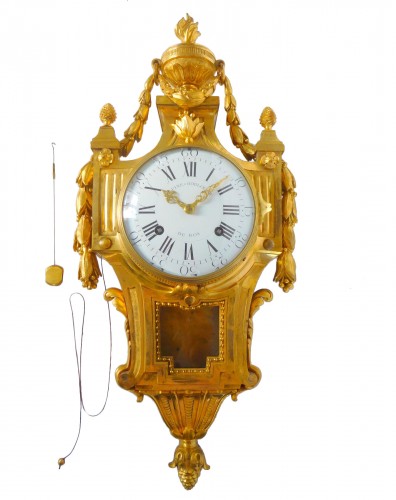 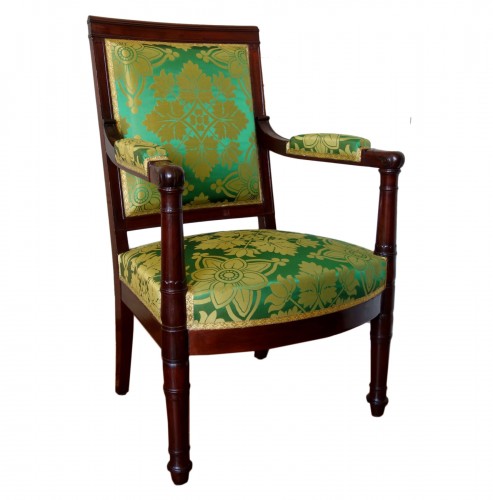 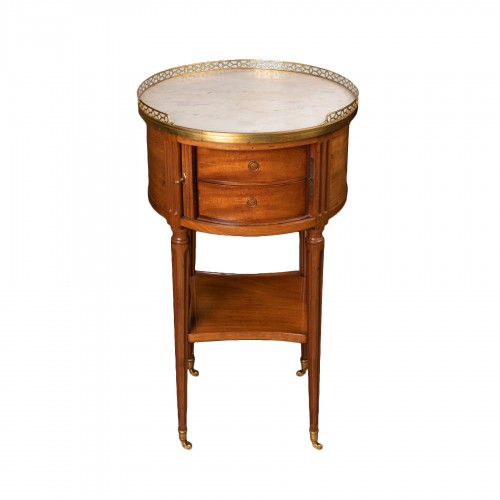 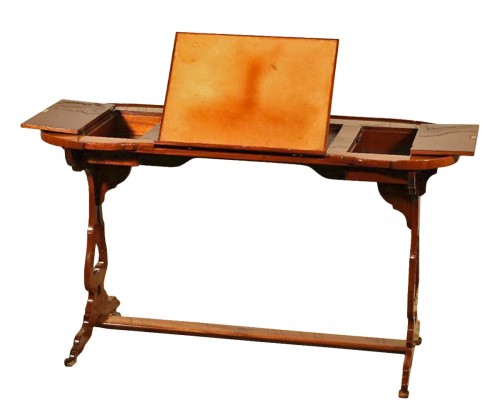 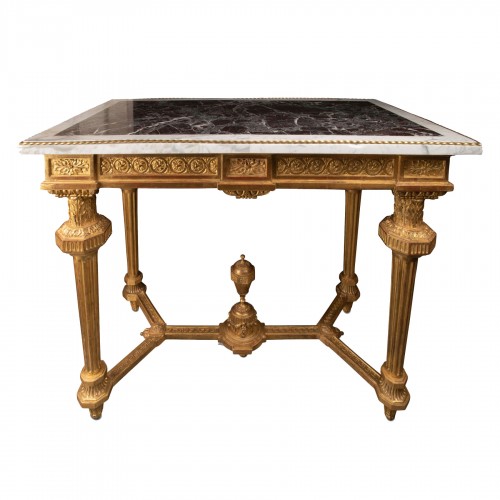 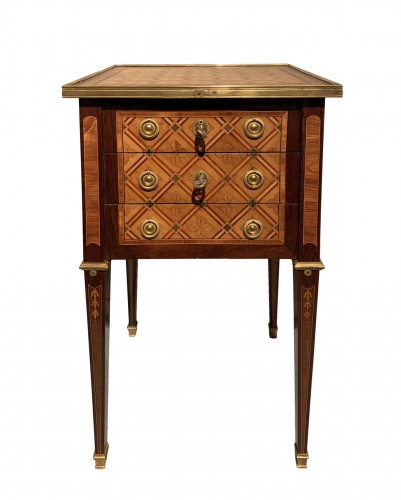 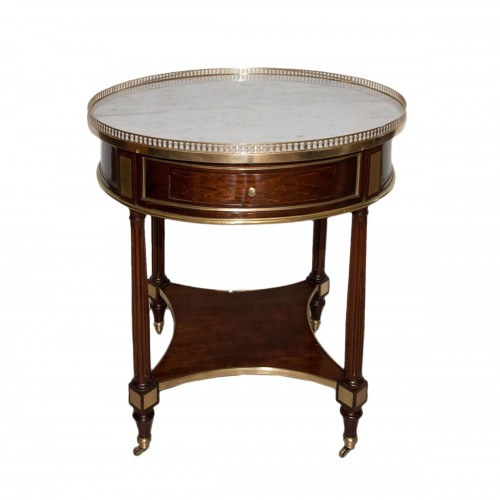 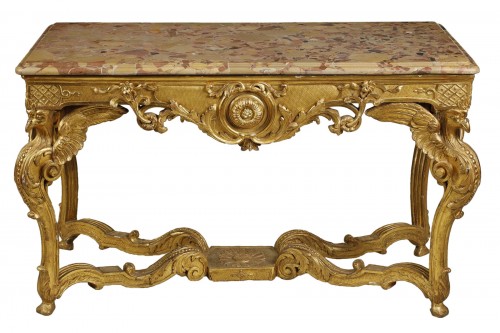