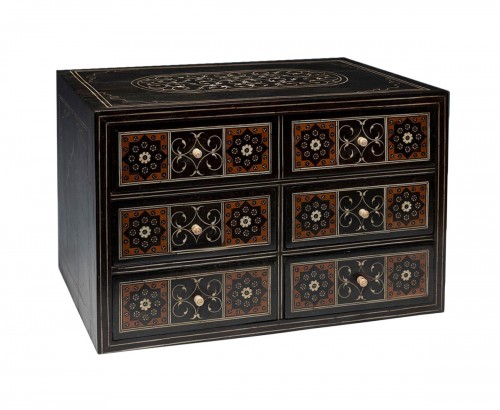 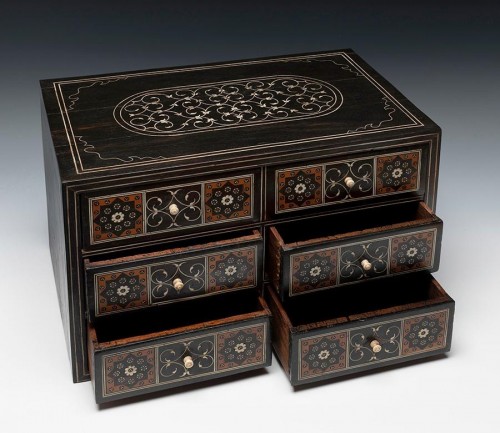 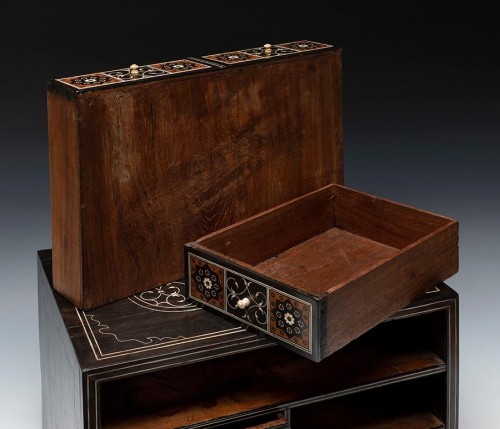 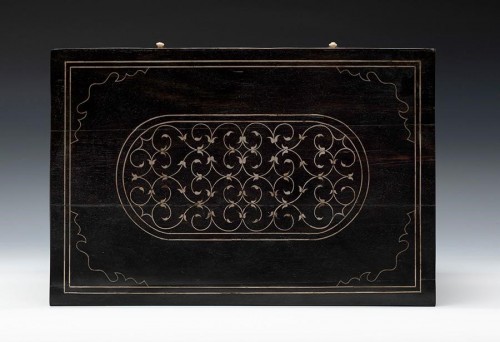 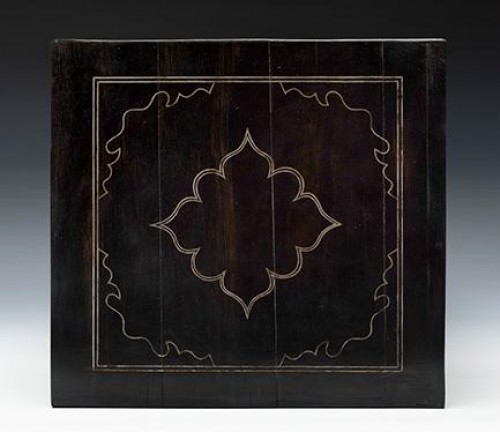 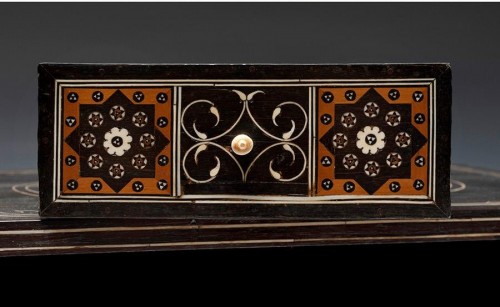 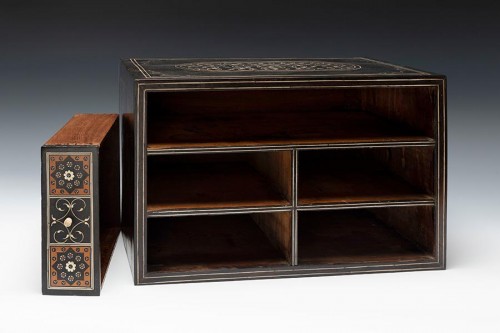 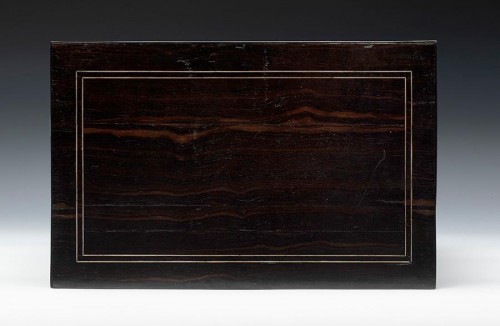 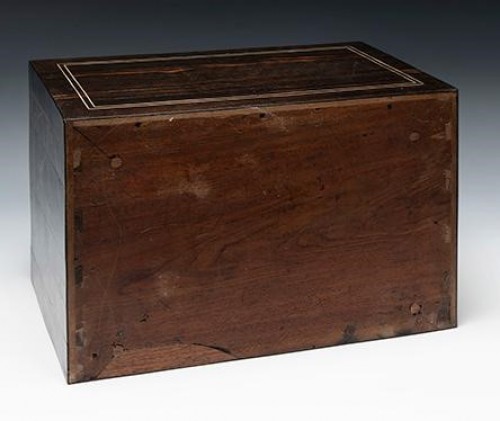 Inlays in ebony, teak, exotic woods, ivory and copper.
Bibliographical references: Indian luxury goods: the art of the Indian cabinetmaker / Amin Jaffer. London: V&A
Similar models can be found at the V&A Museum in London.
Measurements: 36.5 x 23.5 x 24.5 cm.
This piece belongs to one of the earliest identifiable groups of furniture made in India under Portuguese patronage in the 16th century.
Cabinets or counters of this type were intended to contain personal effects and were a basic necessity for European merchants and traders living and traveling in Asia.
The production of these objects was based in West India, a point of creation of luxury goods where there were firmly established merchant communities from the Middle East, Southeast Asia, the Far East and Europe. Contemporary accounts differ as to the exact place of manufacture of these items, possibly suggesting that there were several centers in western India working in related styles and sharing production methods: at Tatta, Sindh, ornamental writing desks are made locally , drawing boards, desks and the like; they are very well inlaid with ivory and ebony, and were once exported to Goa and the coastal cities; but also the neighboring region of Gujarat is indicated as an important center in the production of fine inlaid furniture: in Surat, one of the main ports of Gujarat, it was possible to buy carefully polished ebony, ivory and mother-of-pearl “scrutores or cabinets”. and embellished.
Regardless of their exact place of manufacture, it is clear that movables of this type were made in western India and traded both locally and in Europe, where their exotic materials and decoration would have warranted their high esteem. Like other products destined for Europe, these cabinets were frequently traded through Goa.
The decorative technique called "Sadeli mosaic" is a type of micro mosaic characterized by the repetition of geometric patterns. It is a highly specialized craft that has a long history in India and the Middle East; the earliest examples date back to the 16th century.
The ancient art of Sadeli mosaic is said to have been introduced from Shiraz to Persia via Sindh and Bombay, long before the appearance of Indian boxes. The early box designs seem deceptively simple. The point is that they arose from a culture that had mastered geometry and figured out how to generate a model from a series of points. The models are so harmoniously combined that their incredible complexity is not immediately noticeable to the viewer. 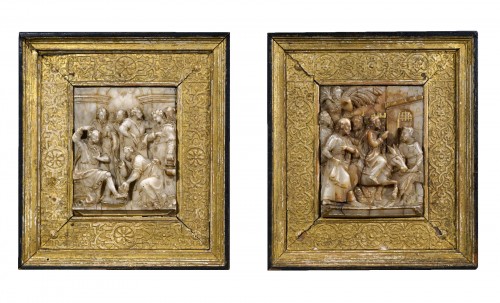 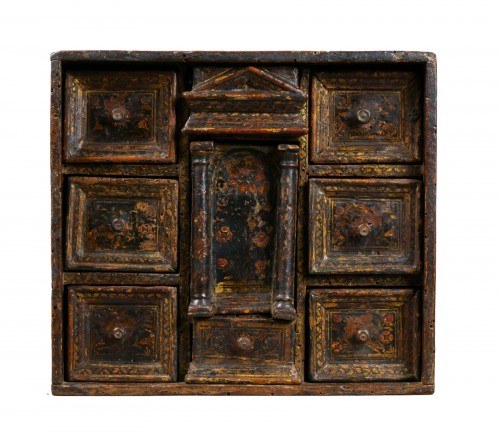 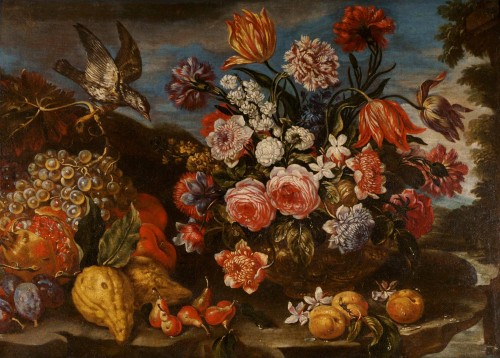 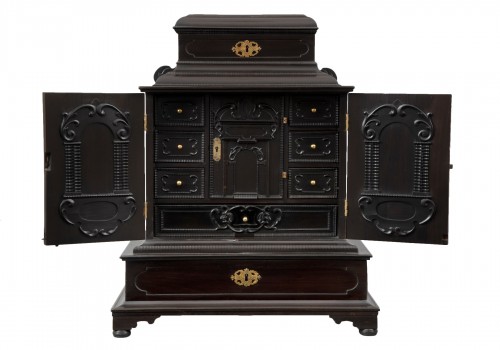 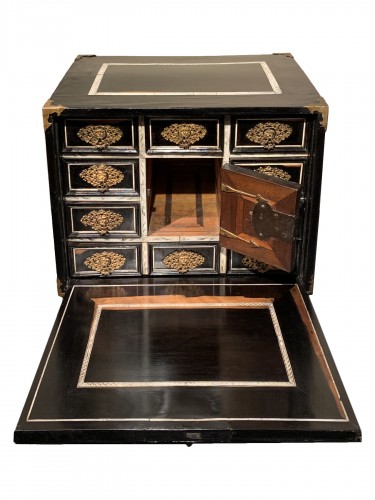 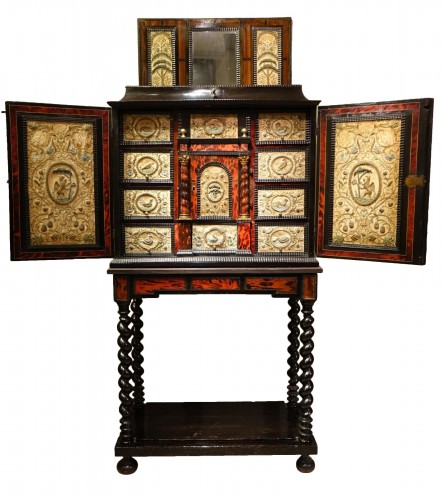