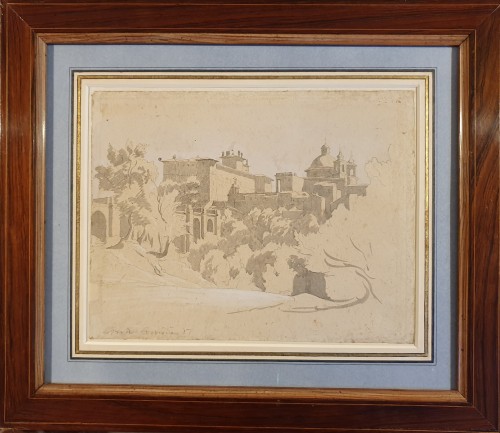 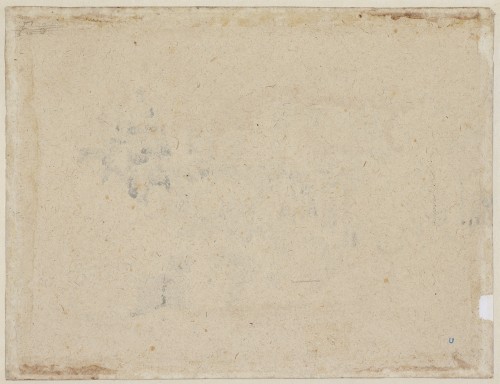 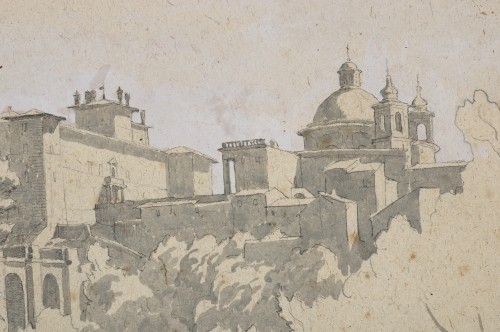 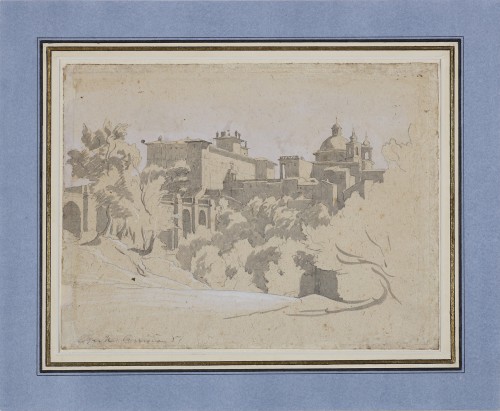 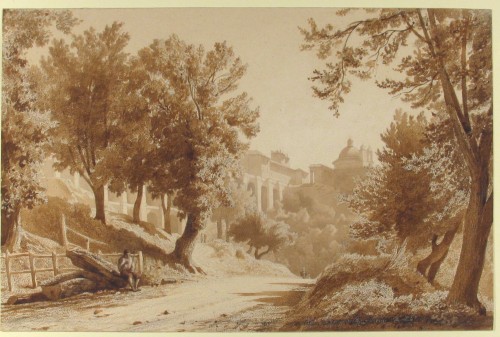 This very modern drawing presents a view of Ariccia, a small town 25 kilometres south-east of Rome. The Palazzo Chigi (in which the film-maker Luchino Visconti would film a large part of The Leopard a century later) and the adjoining church are seen from the bottom of the ravine that surrounds the town. This drawing is a moving testimony to the attraction of the city for artists of the Romantic period, who established in Ariccia a vivid artists' colony.

Achille Bénouville is probably the main representative of what could be defined as the third (and, so to speak, last) generation of neo-classical and/or historical landscape painters. Born in the 1810s and 1820s, Félix Lanoue, Paul Flandrin, Eugène Ferdinand Buttura or Alfred de Curzon are Bénouville’s contemporaries.

After winning the historical landscape prize in 1845 (the same year his brother Léon won the Grand Prix de Rome for painting), he returned to Italy to spend three years at the Villa Medici. He then settled in Italy for 25 years, until the death of his wife in 1870, an event that led to his return to France.

From a viewpoint located below the town, the artist depicts the main monuments of Ariccia: the Chigi Palace and the adjoining church, the monumental access bridge.

The Chigi Palace was built between 1664 and 1672 by the Chigi family, which was at the height of its power thanks to the pontificate of Alexander VII (1655 - 1667). Carlo Fontana was the architect who supervised the transformation of an earlier fortress, based on a project by Giovan Lorenzo Bernini, who also designed the Maria Assunta Church opposite.

The small town, which stands on a hilltop, is surrounded by deep ravines, which explains the construction in the mid-19th century of the monumental access bridge one can see on the left.

This view taken from below shows the city in a backlight which the artist has rendered with great economy of means. The city stands out against a bluish sky suggested by a thin highlight of gouache. Only the shadows are drawn with a grey wash, while the rest of the ochre-coloured paper remains unpainted.

While some older drawings demonstrate that Bénouville visited Ariccia well before 1851, it seems to us that our drawing can be regarded as a preparatory drawing, probably executed in the open air, for the much more accomplished drawing from the Metropolitan Museum in New York (last photo of the gallery). The latter was done in brown ink wash with watercolour highlights and bears the signature "Ach. Bénouville Roma 53", which clearly indicates that it was made at a later stage in the artist's Roman studio.

4. Ariccia, an artists' colony at the gates of Rome

The fame of Ariccia in the Romantic period was largely based on the attractiveness of the Locanda Martorelli, the inn located in the square in front of the palace, which was a popular stop on the road to Naples during the Grand Tour. This inn later became a holiday resort attracting the entire Romantic generation, both writers and painters. Artists as diverse as J.M. William Turner (1775 - 1851), Jean-Baptiste Corot (1796 - 1875) and Henrik Ibsen (1826 - 1906), who wrote his play Brand here in 1865, stayed there.

It is interesting in this respect to compare this drawing to the view of Ariccia painted in 1826-1827 by Jean-Baptiste Corot (with whom Bénouville shared a studio in Rome in 1843). In this painting Corot presents a viewpoint quite similar to that of our drawing, also in a backlight, at a time when the monumental access bridge had not yet been built.

The drawing has been given new margins and is presented in a 19th century natural wood frame with light fillets. The blue of the marie-louise has been chosen to match the thin gouache highlights of the sky. 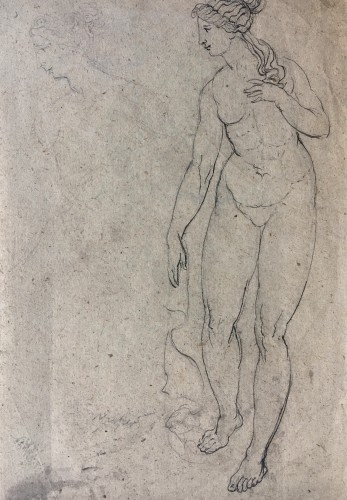 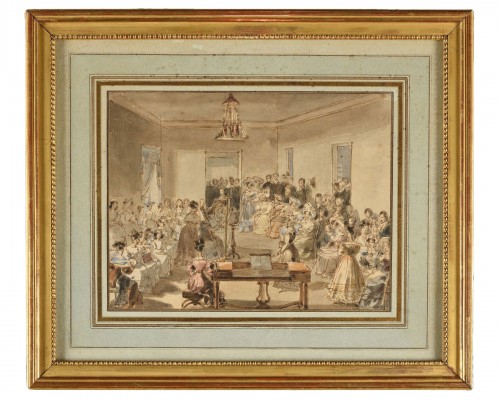